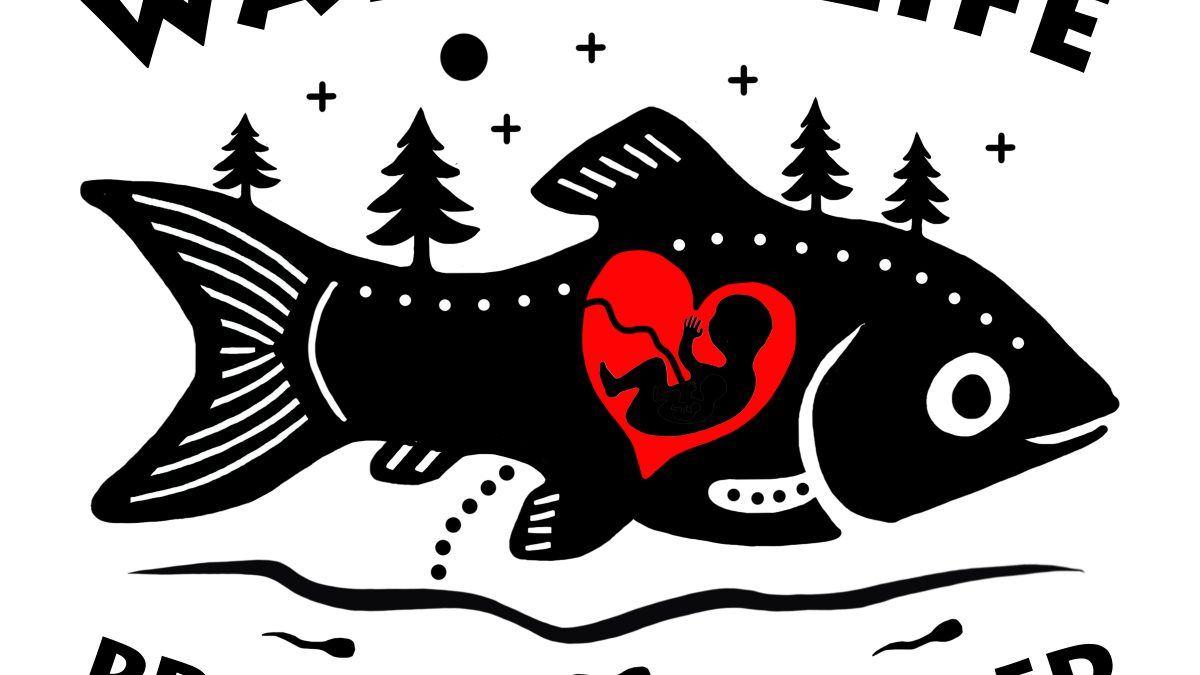 In two webinars at the IASC 2021 Water Commons Virtual Conference (19-21 May 2021), past and future contributors reflected on the joint UndEnv-FLOWs series “Reimagining, remembering, and reclaiming water: From extractivism to commoning”.

Last week, during the IASC 2021 Water Commons Virtual Conference (19-21 May 2021)  two panels reflected on the blog series “Reimagining, remembering, and reclaiming water: From extractivism to commoning”, co-hosted by Undisciplined Environments and IHE Delft’s FLOWs. The series builds on emerging discussions and activist practices of re-commoning water, that seek to heal  our relations to this non-human “relative” of ours. These new political ecologies  demand what Orla O’Donovan calls a  “re-membering”, in a double sense: bearing in mind the importance of water and past ways of relating to it, and re-connecting the socio-ecological ‘members’ of our water bodies. 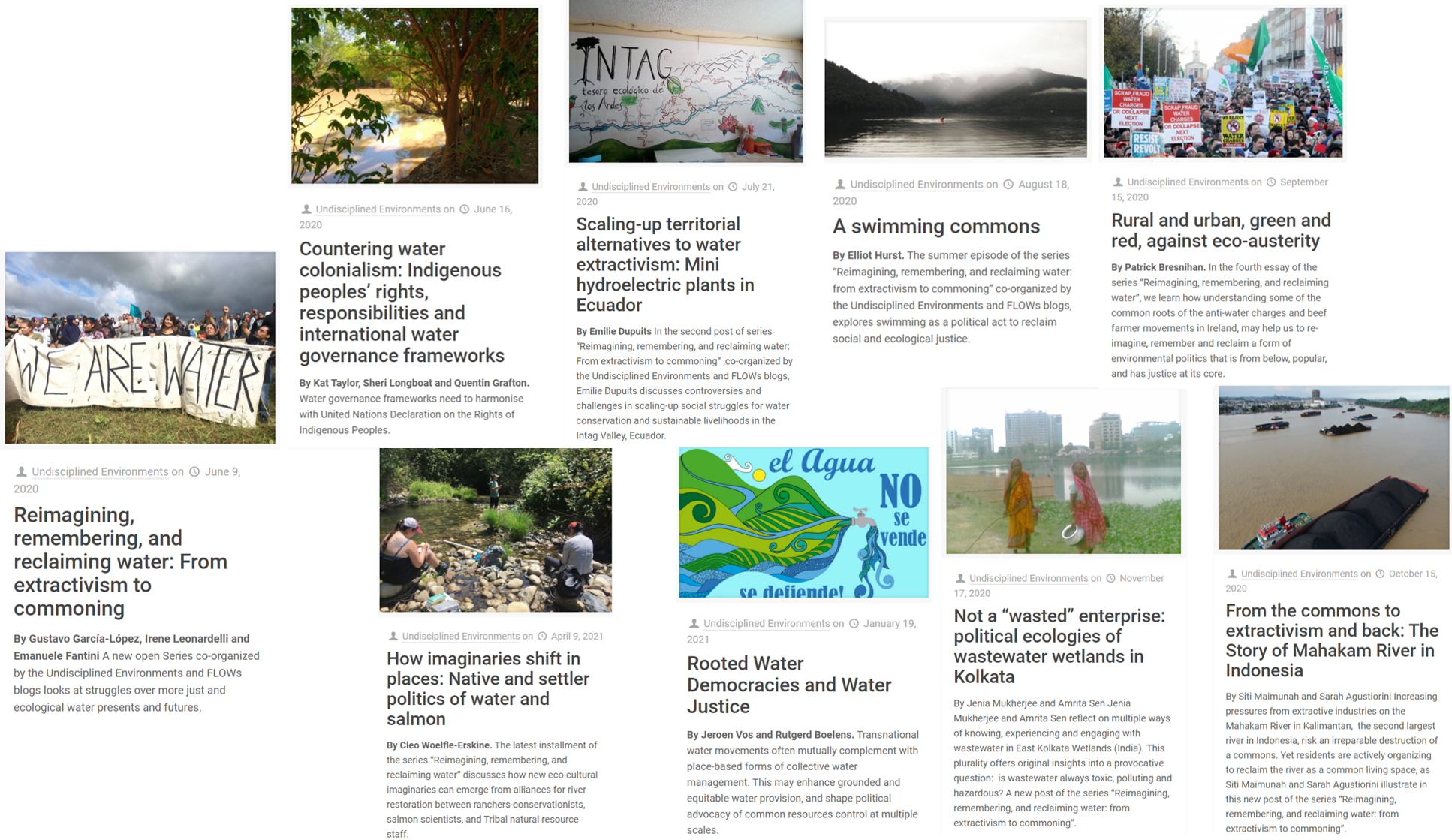 Collage of the essays published so far in the series. Source: Authors.

During the first panel, those authors who already published an essay in the series (Jenia Mukherjee and Amrita Sen, Patrick Bresnihan, Emilie Dupuits, Elliot Hurst, Siti Maimunah and Sarah Agustiorini, Cleo Woelfle-Erskine, Kat Taylor and Sheri Longboat) reflected on the contributions so far, on how the series is fertilizing new ideas on re-imagining, re-connecting and re-claiming water commons. The contributors were invited to join an exercise in “active reading”: giving a brief description of  another essay from the series, and answer briefly how that essay 1) fosters “critical thinking on current challenges and possibilities for more just and ecological water presents and futures”  and 2) re-centers the political dimension of water commons and commoning. The diversity of the contributions that made up the series so far demonstrated how the category of the commons and the commons themselves are stretched between,  on the one side, universal understanding and aspirations – for instance to advance a political agenda against neoliberalism or privatisation – and, on the other side, specific, situated, and different local understandings of the commons.

The discussion highlighted in fact how despite an emergent universalism of the commons, which is central to current struggles around the world, water commons continue to have multiple, often troubled, meanings and how consequently any analysis needs to be historically and contextually situated.  It is by carefully looking into the socio-ecological histories of different water bodies that one can trace back when their functions and uses changed, who decided those changes and according to which political frameworks or, in other words, if and when practices and relations around those water bodies started to become extractivist.

Hence the importance of re-shaping water governance frameworks on indigenous perspectives – another lesson learnt from the series and stressed recurrently during the discussion. This means decolonizing water governance, supporting indigenous struggles against neoliberalism-driven water extractivism and overexploitation and giving space to more participatory, situated ways of taking care of waters. Another way to re-think water commons and the frameworks that govern them, is as multi-species sites, as shared spaces or common denominators between human and more-than-human actors (fish, algae, sediments and much else) living and changing together. This way water commons become less of an abstract concept and more of a sensorial experience. All contributors loved to evocate their swimming experiences in water commons (a lake, the sea, a river, a paddle, a stream), elicited from one of the posts in the series. Swimming, splashing memories have the power to weave together different conversations around water commons, and more if we think about who gets to swim, where, in which waters, with what ecological conditions?

Participants in the first panel, May 19. Source: Authors.

The second panel comprised those authors who will contribute to the series in the next months (Sergio Villamayor-Tomás, Andreas Bieler, Jampel Dell’Angelo, Fabio de Castro and Nick Bourguignon). They were asked to reflect on the lessons learned so far from the series and on where to go next: which points, perspectives, audiences should still be addressed? How can we work together to expand our understanding of water commons? Also, they were invited to reflect on blogging as a methodology to share research-activism insights and inspiration, beyond the academic walls.

The discussion underlined some of the points raised in the first panel concerning the plurality of understandings and practices of “water commons”, across global North and South regions, as well as the centrality of indigenous struggles and knowledges to counter water extractivism. Other lessons identified concerned the fundamental inter-connections between water and other commons, such as land…and the importance of embracing the complexity of water commons in our analysis and narrations.

Concerning how to move forward, two main thematic suggestions were to reflect on the invisible forms water commons may take, such as groundwater and virtual water; and on the links between water and direct democracy or citizen participation, as for instance in the experience of Italy and Greece. Panelists also suggested to include more activists and natural scientists for inter- and trans-disciplinary water commons approaches; and to feature visual essays as a powerful ethnographic and communication tool.

Finally, the panel pointed to the potential of blogging as a very valuable method to simultaneously offer information in open access and easy to read formats, engaging with not only academic material but also other audiences; and to create community, reflect together, and stimulate creative thinking. This way, blogging itself could be seen as a practice of commoning, or at least we like to think about it that way. The water series will continue, stay tuned!

Irene Leonardelli (i.leonardelli@un-ihe.org) is a PhD fellow in Feminist Political Ecology at the IHE Delft Institute for Water Education, in the Netherlands, and part of the WEGO-ITN. Her work has received funding from the European Union’s Horizon 2020 research and innovation programme under the Marie Sklodowska-Curie grant agreement No. 764908. Her research focuses on processes of agrarian transformation and water governance in Maharashtra from a feminist perspective. She is a member of the Undisciplined Environments editorial collective.

Emanuele Fantini(e.fantini@un-ihe.org) is Senior Lecturer / Researcher in Water Politics and Communication in the Water Governance Department at IHE Delft. He is the editor of IHE Delft Water Governance blog, FLOWs, and he hosts the podcasts “The sources of the Nile” and Water Alternatives Podcast.