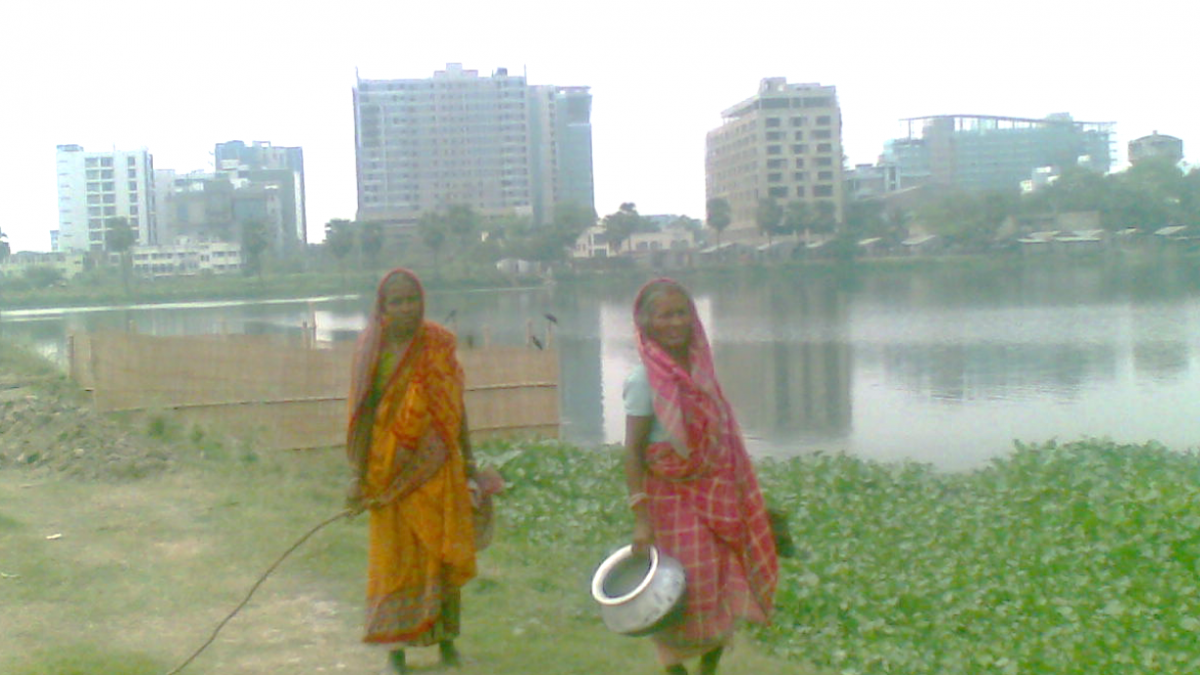 By Jenia Mukherjee and Amrita Sen

Jenia Mukherjee and Amrita Sen reflect on multiple ways of knowing, experiencing and engaging with wastewater in East Kolkata Wetlands (India). This plurality offers original insights into a provocative question:  is wastewater always toxic, polluting and hazardous? A new post of the series “Reimagining, remembering, and reclaiming water: from extractivism to commoning”.

“Give us wastewater and solid waste and we will give you back fish, crops and vegetables at the least affordable prices,” exclaims a fisher from a cooperative bhery (fishery) of the East Kolkata Wetlands (EKW). The vast watery world intermitted by lush green patches that one encounters while entering the city of Kolkata (India) through the airport is designated as the East Kolkata Wetlands. These 12,500 hectares of wetlands, protected by the international Ramsar Convention since 2002, demarcates the peri-urban fringe of Kolkata – one of the five biggest Indian metropolitan cities buzzing with 15 million vibrant lives. Till this day, this robust city does not have a sewage treatment plant, thanks to the wetlands encircling her on the east.

Comprising 254 bheris (traditionally excavated sewage-fed ponds), these wetlands historically emerged through a complex process of colonial urbanization along a series of hydraulic alterations on the Ganga Delta. The peri-urban wetlands connected to the municipal canal carrying wastewater evolved as an input and output, geared to the requirements and interests of the city in terms of receiving wastewater and producing sewage-fed crops and fish. The EKW recycles 750 million litres of municipal wastewater (including mainly domestic but also industrial effluent) and generates 22 tonnes of fish and 150 tonnes of vegetables per day. This happens through the application of wise-use resource recovery practices pursued by wetland dwellers through intergenerational transmission of knowledge. The EKW is a “living systems infrastructure”, an ecological engineering tapestry involving elaborate technical apparatuses and social arrangements that have evolved over time. 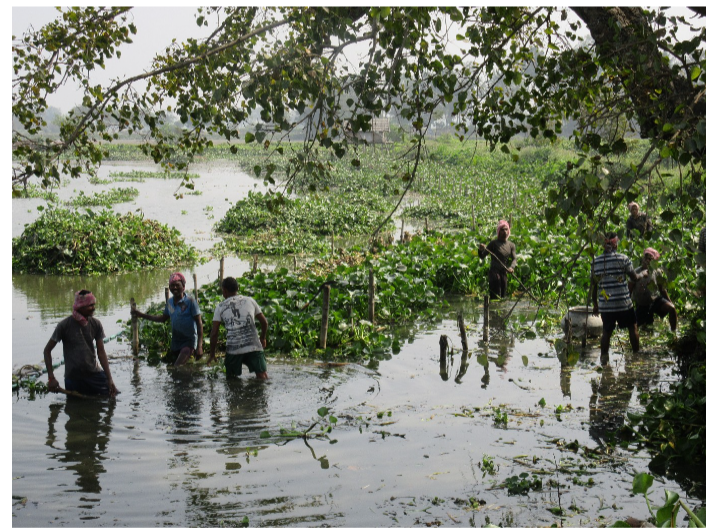 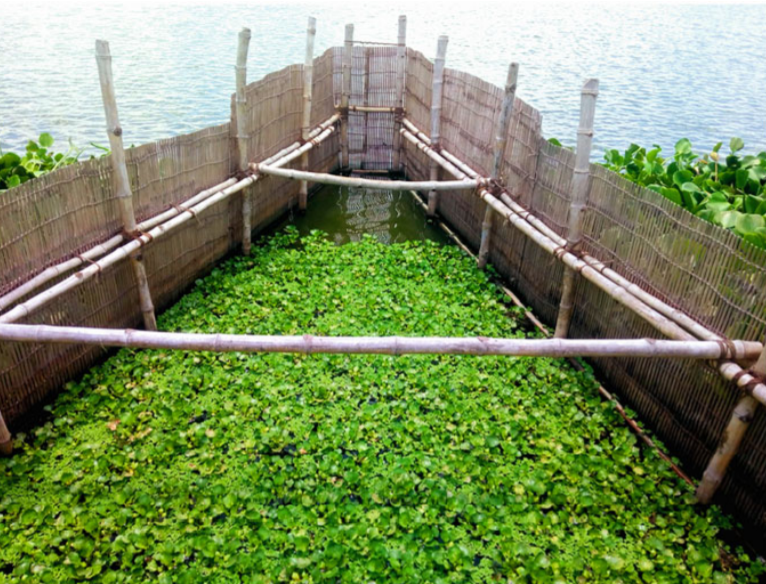 Since 1950, a range of prominent challenges in the form of “urban sprawl,” “mega-urbanization,” and “super-urbanization,” have transformed Asian cities into “consumption cities” expanding on and engulfing arable lands, wetlands, and orchards. Kolkata has not been an exception. Around 70 percent of the East Kolkata Wetlands have been sold to promoters and government and private agencies making way to concrete build space (Cover image). Such reclamations and the consequent emergence of a “manufactured wetland” overlap with the history of colonial urbanization during the nineteenth and twentieth centuries. Ecological attributes and wise use of recovery practices by wetland dwellers that earned the Ramsar Convention protection status for the EKW and the real estate conversions during the post-Ramsar phase are complex stories that deserve “thick description”. This means, they require a careful ethnographic work, that pays attention to different cases, discourses and practices and that enables an understanding of urban ecologies as inherently political spaces.

Mainstream scientific studies on the EKW overlook how specific urban ecological infrastructures are structurally and socially diverse: each bhery has its own “socionatural” narrative. Size, ownership patterns, location in terms of distance from the municipal canal -the principal artery carrying wastewater from the city to the wetlands- are significant variables determining different challenges and opportunities for each fishery. Through ethnographic research conducted on specific government, private and cooperative bheris, Mukherjee (2020) has shown that the two largest government bheris (Goltala and Nalban) are bestowed with locational advantages. The wastewater is led to the channels through pumping stations, connected to underground sewers. The bheris receive the pre-settled sewage from the primary dry weather flow canal through an intricate network of locally excavated secondary and tertiary channels. The distance between the primary canal and the location of the bheri is a key variable in the distribution of and access to wastewater. While the government bheris located nearest to the primary canal receives the maximum supply of wastewater, the bheris located at the secondary canals get a lower quantity of wastewater and those situated at the tertiary canals suffer from inadequate quantity of wastewater supply and distribution. Moreover, being completely state-owned, the government fisheries are entitled to additional incentives like generous funding to buy fish feed, direct network with auction markets, better equipped air-conditioned mobile fish carrying vending cars, etc. Government protection and good production rate make these the least affected against real estate and corporate pressures.

Along with rampant conversions, or the transformation of water bodies into real estate, at the moment EKW is facing a crisis in terms of distribution of wastewater and questions of safety related to the consumption of fish produced from effluents. Media has projected a lack of wastewater distribution in bheris as a deliberate government attempt to push out fisheries. Vicziany and colleagues (2017) depict the limits of traditional reuse strategies, questioning the safety of fish consumption. The debate on the safety issue is a manifestation of power struggle between big corporate fish lobbies promoting the use of artificial fish feed, antibiotics and additives and the traditional wetland fishers. Deficient wastewater distribution in bheris as a deliberate government attempt to stifle fisheries is a recent media projection drawing wide public attention. It centers round the mainstream narrative of hierarchical positioning between the State -with municipal and irrigation officials having the entire control of the effluent discharge and disposal mechanism through operation of pumping stations, lock gates, sluices, etc.- and the fishers at the receiving end, with no decision-making power and influence. However, key informant interviews with irrigation engineers, municipal officials, and fishers suggest that the Irrigation and Waterways Department (IWD) keeps open the regulator gate during the monsoons to lower the wastewater level in the main canal, which prevents flooding in the city, as per demand of the Kolkata Municipal Corporation. As a consequence, fishers complain about inadequate flow in feeder canals. The IWD faces a dilemma between the pressing needs of the Corporation on the one hand and the fishers ’needs on the other. Stakeholders’ meetings and discussions are held to ensure that varied needs and interests of the agencies involved in Kolkata’s drainage-sewerage-aquaculture business and enterprise are met.

We argue that the wastewater access scenario in EKW is a major provocation to capture the “plural” (and not solely the “political”) in the framework of political ecology by speaking about the range of clashing priorities, political compulsions and overlapping interests among the otherwise divergent sets of actors.

Our personal experiences in this contested space as our site of research for a decade enable us to employ historical lenses to the framing of political ecology. We complicate mainstream narratives with an overtone on the political interactions between the city and its wider ecological infrastructures. Deployment of the historical urban political ecology (HUPE) framework remains crucial to unravel and narrate micropolitical processes and the culture of indigeneity surrounding wastewater. Political ecology and hydrosociality have critically challenged the concept of “modern water” as it abstracts water(s) from its political, social and cultural dimensions. On these lines, our approach enables us to dig into larger and deeper questions surrounding wastewater: “Is waste (or wastewater) always toxic, polluting and hazardous?”

Within the course of an informal onsite conversation, a fisher explained:

“Laws of nature are always contradictory. The earth revolves around the sun, but to us it appears the opposite. Fish move in the opposite direction of the river current. Fish cannot survive on clean, transparent water; fish can grow by consuming sewage. Unfortunately, experts are now raising questions on the safety issues relating to fish consumption in EKW. Traditional knowledge systems, cultural perceptions and recovery mechanisms are being doubted. Though there has been an increase in inorganic particles flowing through the municipal canal during recent times, no single case of disease has been reported yet. The corporate fish lobby which uses chemicals in fish to incur huge profits on investments are victimizing us with the argument that wetland fish is unsafe to consume and might lead to cancer. And, this is the greatest irony disrupting our occupation and attachment to this enterprise since generations.”

The quote allows us to reflect on how wastewater is and is known differently by different actors: the fisher knows that these differences are political. Through a spatially-informed and politically contingent observation, we argue that within emerging urban and peri-urban political ecologies of wastewater, the non-modern, non-western ontological and epistemological departures should be accommodated. Multiple ways of knowing, experiencing and engaging with the wastewaterscape can forge more just, democratic and resilient axiologies of ecological futures.

Jenia Mukherjee and Amrita Sen are Assistant Professors at the Department of Humanities and Social Sciences, Indian Institute of Technology Kharagpur. Email: jenia@hss.iitkgp.ac.in and amrita.sen@hss.iitkgp.ac.in.