The photos you post of a park may hide clues about what leads to green gentrification in cities.

Editor’s note: This post is part of the series “Green inequalities in the city”, developed in collaboration with the  Barclona Lab for Urban Environmental Justice’s Green Inequalities blog. The series seeks to highlight new research and reflections on the linkages between the dominant forms of “green” redevelopments taking place in cities and questions of urban environmental justice, and the challenges and possibilities these imply for more just and ecological urban spaces.

A recent study published by the Barcelona Lab for Urban Environmental Justice analyzed 4320 geo-located photos shared on the social media platform Flickr to understand how Barcelonians perceived and valued urban parks over the years and to what extent this could be correlated with green gentrification processes.

Green gentrification is traditionally understood as the application of an environmental planning agenda associated with green spaces that generates the displacement or exclusion of the most economically vulnerable population from access to the localized benefits of urban greening.

Approaches to understanding green gentrification generally involve characterizing broad trends in the relationship between new green infrastructures and a posteriori socio-demographic changes in the area. So far, however, there is little empirical evidence of which specific characteristics of urban green spaces trigger the interest of residents in such a way as to spark or reinforce green gentrification processes.

In response to this, we considered the photos shared on social media as proxies of how visitors valued the parks and, beyond that, what particular aspects they valued the most—enough to take a photo and share it on social media. 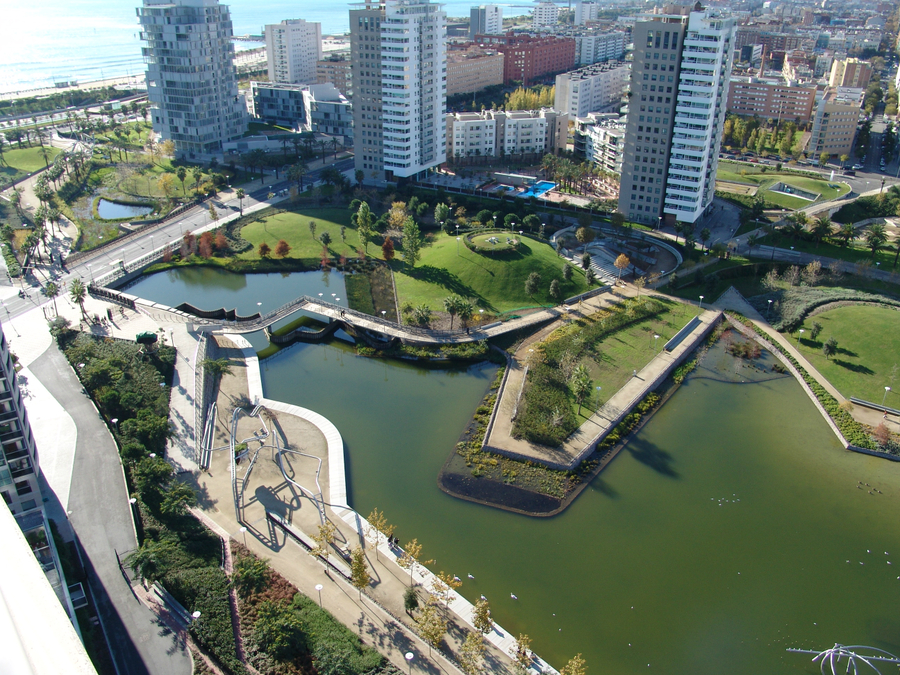 Lake and sculptures in Parc de Diagonal Mar, which was associated with green gentrification

To analyze the crowdsourced photos, the researchers used the framework of Cultural Ecosystem Services (CES). CES are defined as the intangible benefits derived from nature, such as knowledge systems, social relations and aesthetic values. In this study, the CES framework helped us understand the extent to and ways in which people valued ecosystem services provided by urban green spaces and how this related to processes of green gentrification.

To investigate that process, we worked with 4320 photos uploaded on Flickr between January 2004 and December 2017 that were geographically tagged within the boundaries of 18 urban parks in Barcelona. We assessed and classified the photos into 22 categories of CES to reveal people’s perception of aesthetic, recreational, social and cultural qualities of green spaces.

The research relied upon previously obtained results from an earlier study, which assessed through a spatial and quantitative analysis the green gentrification trends of 18 new parks built in Barcelona over a 15-year period. By examining the evolution over time of six socio-demographic gentrification indicators, that previous study identified 9 parks that triggered green gentrification processes in their surrounding neighborhoods. These processes were related to the context of creation of the parks, their location in the city and overall built environment.

Urban garden in Parc de San Martí, which was not associated with green gentrification

In order to examine the extent to which the CES values correlated with processes of gentrification, we ran cross tabulation and descriptive statistical analyses between the photo categorization and the results from the Barcelona study described above. We then correlated these findings with park size, greenness and topological features to understand how physical aspects in and around urban parks influenced processes of social change. We measured park greenness through the Normalized Difference Vegetation Index (NDVI), which is a commonly used indicator of the density of green. As for the topological features in the park, we obtained a list of park features and amenities from the municipal Barcelona database of parks and gardens.

These outcomes suggest that parks that produced higher aesthetic and recreational values were more exploited for new high-end real estate development and tourism—and thus associated with green gentrification—whilst parks that produced higher social and cultural values were not. By offering spaces that fostered social cohesion, place-making and cultural identity, such as sports facilities, resting areas and urban gardens, the latter type of parks allowed residents to appropriate the features and amenities of the parks for their own needs, which, in turn, might have mitigated green gentrification in their neighborhood.

Another remarkable result was that both groups of parks presented similar levels of low to moderate greenness (relative to a non-developed preserved natural area), and similar proportion of green and non-green objects portrayed in the photographs (81% non-green vs 19% green). This finding indicates that the focus of photos taken within the parks – regardless of whether they were gentrified or not – was on non-green aspects of park infrastructure rather than on ecological or nature-based features. This suggests that the level or quality of the green in a park did not seem to influence gentrification. Rather, it was the infrastructure in and around the parks that seemed to attract people the most and motivate picture-taking.

Rethinking the way we design parks

This tells us that green gentrification is not so much about the “green” contained in a park, but the multiple ways in which the green and the built combine to produce new cultural and economic values, which may then be exploited by planners and investors with inequitable outcomes for socially vulnerable residents, or reappropriated by the local communities, thus potentially strengthening social and cultural ties and nurturing sense of place.

This points toward an important policy implication: that not all types of urban greening generate gentrification, but rather, that inequitable socio-environmental patterns also depend on the features and amenities installed in the parks and their values and benefits for possible gentrifiers.

Thus, beyond location and greenness, urban planners and policymakers ought to consider the features and amenities offered in new and redeveloped green infrastructures, prioritizing structural and social elements that foster social cohesion, place-making and cultural identity over aesthetics.

Ana T. Amorim-Maia  is an environmental engineer from São Paulo, Brazil whose research explores how urban climate adaptation efforts can exacerbate or alleviate socio-spatial inequalities in cities and how adaptation planning and policies can become empowering tools for marginalized communities to build long-term resilience. At BCNUEJ she assesses the ways in which urban adaptation and greening initiatives can be more inclusive, empowering and just.