From the commons to extractivism and back: The Story of Mahakam River in Indonesia 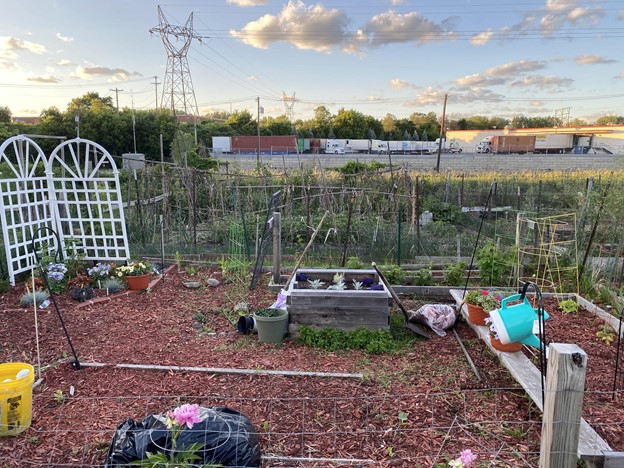 By Kelsey Poljacik and Rebecca Walker

A new project analyzes the complex relationship between community gardens and gentrification in Minneapolis, and the choices and tensions community leaders face in shaping the impact these gardens have on their neighborhoods.

Editors’ note: This essay is part of the “Green Inequalities in the City” series, a collaboration with the Green Inequalities blog from the Barcelona Lab for Urban Environmental Justice and Sustainability (BCNUEJ). It seeks to highlight new research and reflections on the linkages between the dominant forms of “green” redevelopments taking place in cities and questions of urban environmental justice.

“Is this a gentrified kind of thing?” That was the question Nancy* had been asking herself about the community garden that she leads in a disenfranchised neighborhood of Minneapolis, where food is grown to provide residents access to fresh, free produce. Though her garden felt far away as we chatted over Zoom, its effects on her neighborhood was the center of our conversation that afternoon.

“It can be a signal [of gentrification],” she said, “but I would say, [the garden] is also a means of access, trying to fill in the gaps…because we experience food apartheid over here.—I wouldn’t even just say food desert because we have grocery stores and corner stores—but it’s the quality of our food. For me, I’m privileged, because I have access to a car and I have the money, so if I don’t feel like shopping at Cub on West Broadway because their produce is crap…I have that choice.” 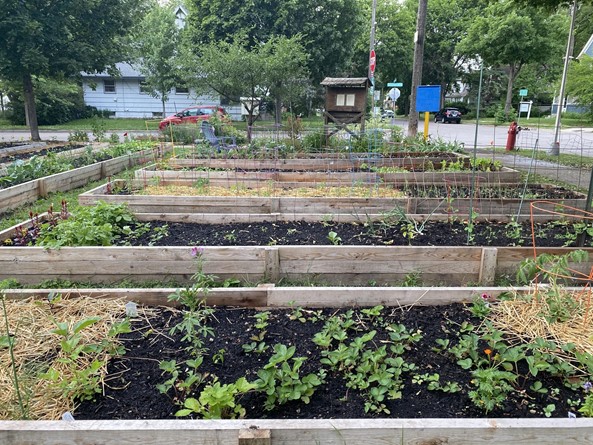 Community gardens can help counter the ‘food apartheid’ suffered by marginalized communities, but it can also bring gentrification. Source: authors

Nancy wrestled with the tensions she felt around community gardening. On the one hand, the garden, located in North Minneapolis, the city’s predominantly Black neighborhood, provided a valuable resource to the underserved neighborhood and its residents.

“My mom was getting help with food stamps every month, we couldn’t make a weekly grocery store trip, it was like once or twice a month… And we had to ride the bus…You don’t really have the choice in the quality of produce. But starting this garden over here… we are trying to create our own access to fresh, organic food.”

On the other hand, she worried about the changes her garden might bring.

“I’ve seen it in other neighborhoods in areas of North Minneapolis or even Northeast…these community gardens, you have your own little box and you pay for it…We don’t do membership stuff because…this is a bit more of a gentrified area and it’s going to get even more, so we’re trying to, in a way, keep it…If you want to grow something here, you better be willing to share it.”

What choices can community gardeners make to shape the impact their gardens have on the neighborhoods they call home? It was this question, and the underlying tensions it embodies, that we aimed to understand through our research project in Minneapolis, Minnesota.

Minneapolis is a city renowned for its outdoor spaces, including an award-winning network of parks embedded with lakes, rivers, and trails. In line with this, the city’s progressive politicians actively push an eco-friendly image of the city that includes support for community gardening, particularly during the pandemic. These progressive policies play out in the context of a city whose economy, population, and housing costs are rapidly growing. Indeed, the cost of living in Minneapolis now exceeds that of cities like Austin, Texas and Nashville, Tennessee, and is on track to rival the cost in Denver, Colorado and Seattle, Washington. 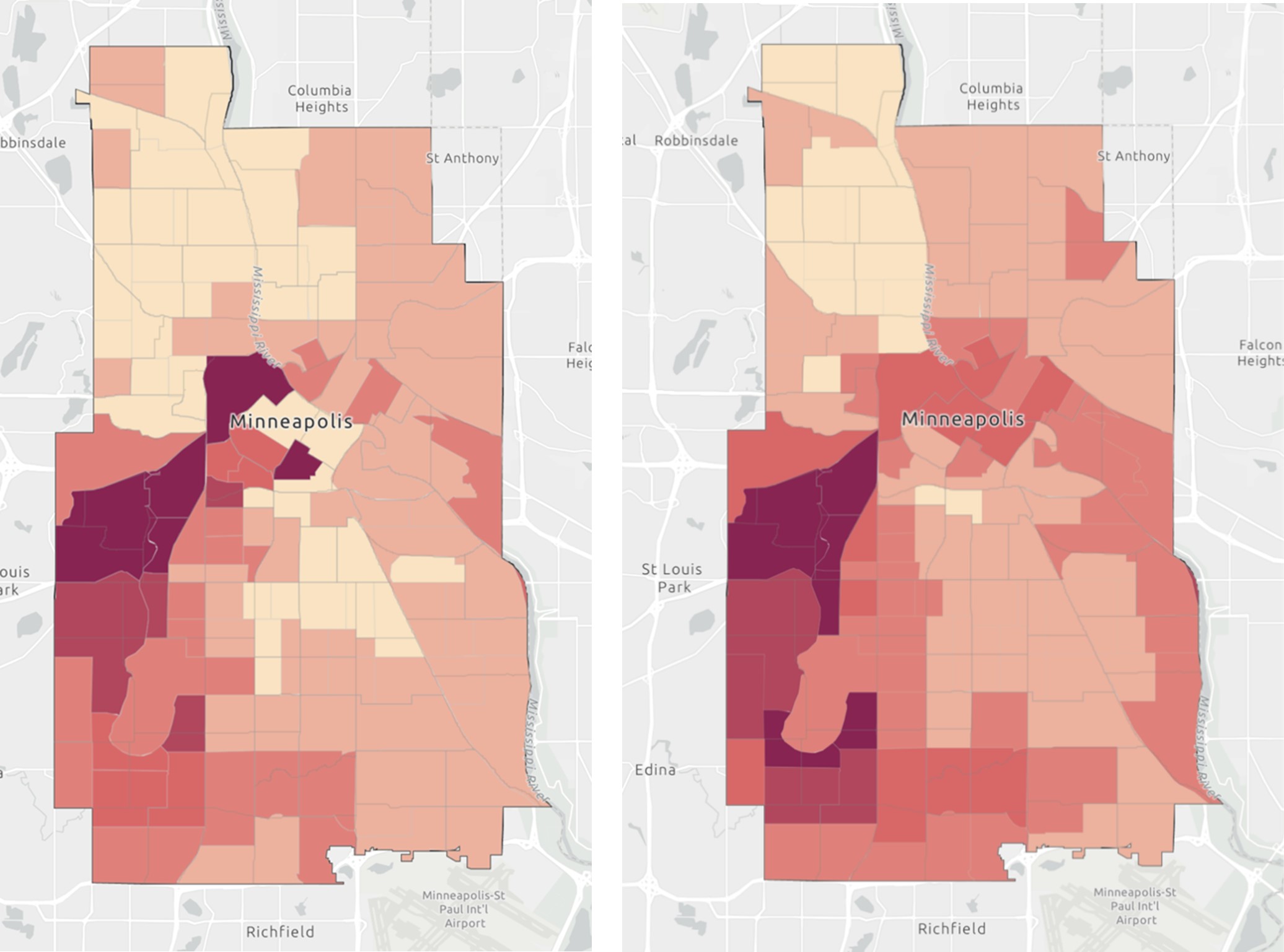 These rising costs correspond to widening disparities between rich and poor that manifest along racial lines in Minneapolis. A deeply segregated city in one of the most segregated states in the country (e.g., Minneapolis ranks 99th of 100 largest U.S. metros in the gap between Black and white median income; Minnesota ranks 45th out of 50 states when it comes to racial integration and has the 2nd largest gap between Black and white residents in home ownership), these environmental and social policies have profoundly different consequences for white residents than for people of color.

As graduate students at the University of Minnesota studying Natural Resource Management and Urban Environmental Planning respectively, we drew on the methods and theoretical backgrounds of each of our disciplines to understand the relationship between community gardens and gentrification. The result was a Story Map that integrates qualitative interview data with quantitative mapping in order to tell the story of this complicated process.

As we explain in the Story Map, urban community gardening is a broad category with a diversity of purposes and outcomes. Gardens may be fully communal, where everything is co-gardened, or take the form of “allotment” gardens, in which single plots are rented out to individual gardeners. In Minneapolis, as in other large cities in the United States, community gardens have been a part of our urban fabric for well over one hundred years. Today, community gardening is experiencing a renaissance in city planning for its purported social, economic, and environmental benefits. This is especially driven by the erosion of public services in our contemporary neoliberal era. 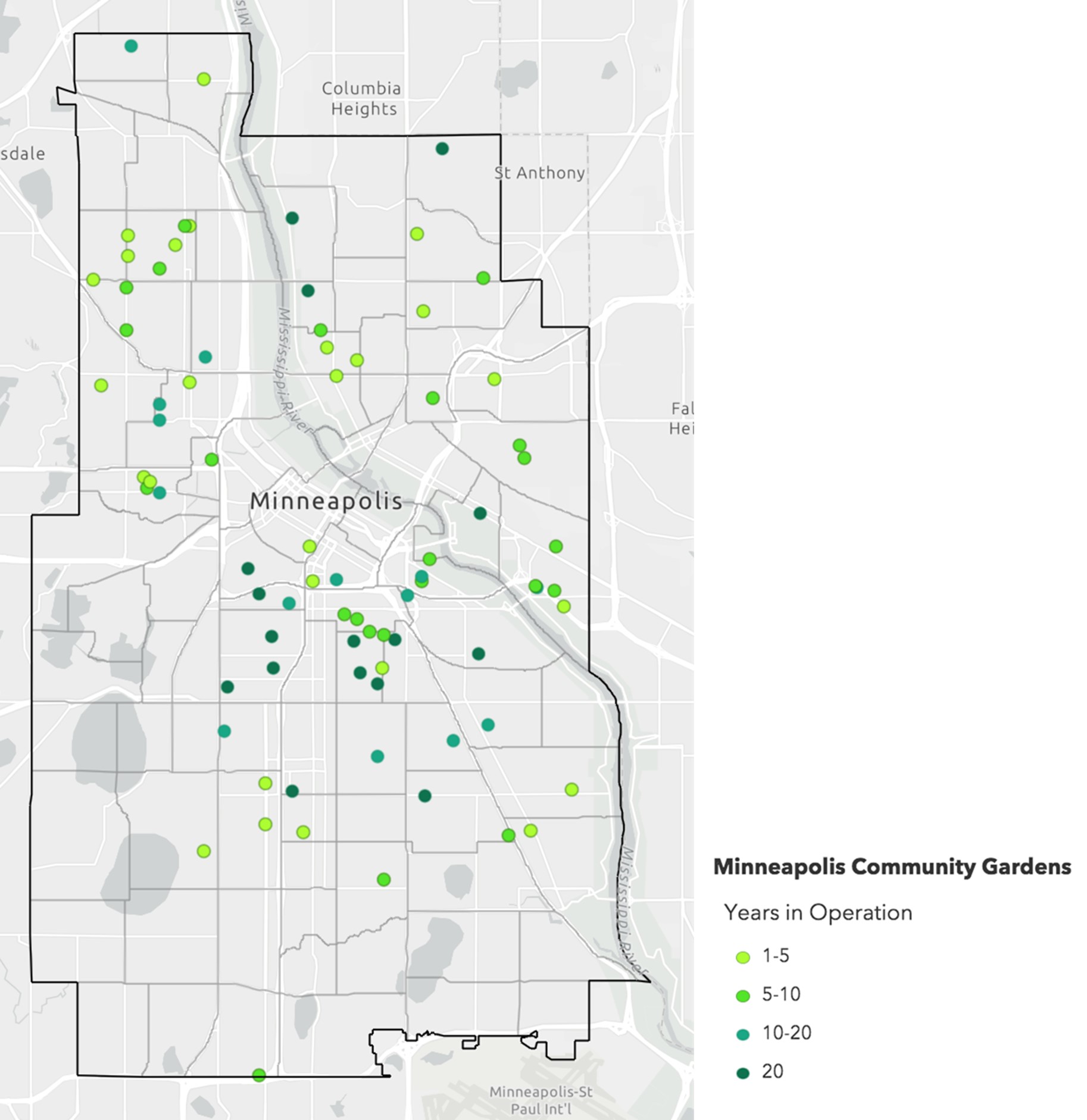 This renaissance in community gardening is accompanied by a growing concern over the role of gardens in driving the gentrification of low-income urban neighborhoods. This concern is part of a broader phenomenon known as environmental or green gentrification. Green gentrification describes the process through which “green,” or environmentally-friendly, amenities—things like parks, bicycle trails, farmer’s markets, and even LEED-certified buildings—increase the perceived value of a neighborhood. This drives up home values and rent prices, causing the displacement of low-income residents. Like other green amenities, community gardens are visible signals that a neighborhood is conducive to living an environmentally-conscious lifestyle, a perception that real estate markets capitalize on. In this way, gardens may contribute to rising costs of living, a shift in the social character of a neighborhood, and the displacement of long-time residents.

At the same time, community gardens are just that: driven by the community. These gardens have the potential to serve as spaces that reflect community needs and values, acting as a form of “place-keeping.” The idea of place-keeping is one in which residents actively work to preserve the physical and social fabric of a neighborhood by celebrating its history and affirming the rights of long-term residents to the future of their neighborhood. Gardens can serve as community gathering places, spaces in which neighbors meet one another, recreate, and form the bonds that enable mutual support. Gardens may also play a material role in slowing gentrification and displacement. As sources of food, gardens may reduce expenses for residents vulnerable to displacement.

Using interviews and quantitative spatial data analysis, we found that the relationship between community gardening and green gentrification in Minneapolis is a complicated one. 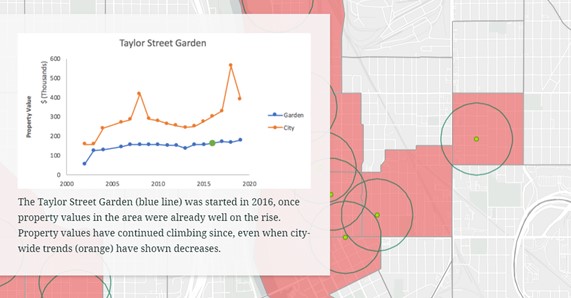 One interviewee in our study discussed the changes she observed in her neighborhood and wondered, “Am I gentrifying my own neighborhood?” But, she continued, “[I am] buying back into my own neighborhood. I think there’s a difference.” Because the garden is maintained communally and free for anyone to join or harvest from, it helps alleviate issues of food insecurity for the neighborhood’s most vulnerable residents. By creating and organizing a community garden, her garden might be a way to resist displacement while gentrification is occurring.

In contrast, another interviewee observed changes such as rising property taxes and transitional changes in her neighborhood, which she characterized as the process of bringing housing up to “‘middle-class taste.” But in relation to these neighborhood changes, she said,

“[Another garden manager and I] didn’t feel like gentrification was affected by the garden, but we may be wrong.” She continued, “Gentrification is sort of a buzzword, I think. I know my husband…he reacted negatively because he said, ‘Man, we’ve worked so hard over the years to build this…It’s not gentrification, this neighborhood is better because a lot of people have worked really hard.’”

Although some gardeners worry about the capacity for their community gardens to contribute to gentrification, others suggest that there is little connection between their garden and this phenomenon. 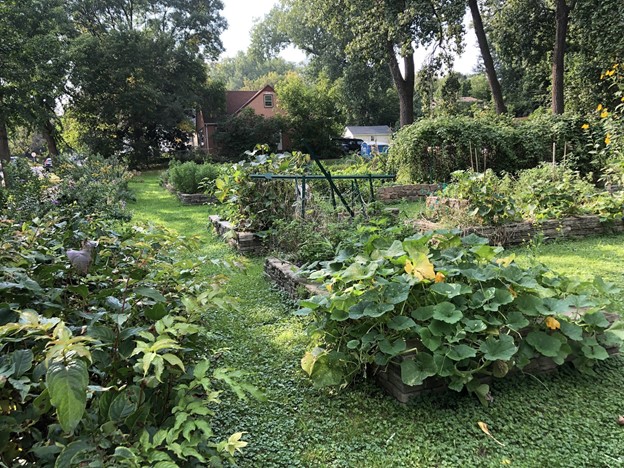 Community gardens can be drivers or side-effects of green gentrification processes, but also forms of resistance to these. Source: authors

What is clear is that community gardens are connected to the process of green gentrification, whether as drivers, as a form of resistance, or as a side-effect of the larger market forces that catalyze gentrification. Context is important. The relationship between community gardening and gentrification is underlaid by the history and geography of a neighborhood, the purpose of the garden, and its relationship with the community. Gardeners and garden managers can shape the impact of their garden through intentional management choices.

Check out our Story Map to learn more.

Kelsey Poljacik is a master’s student in Natural Resources, Science, and Management at the University of Minnesota. She studies community gardening in the Twin Cities Metro Area and the management of urban greenspace.

Rebecca Walker is a PhD student at the Humphrey School of Public Affairs at the University of Minnesota. Her research looks at the intersections between environmental planning and housing justice.

*Interviewee names have been changed to preserve anonymity.