Greening projects both large and small in the rapidly developing Saint Henri neighborhood are stitching together a post-industrial landscape to create new and exclusionary forms of urban living.

Since its days at the heart of Canada’s industrial revolution, Sant-Henri in Montréal’s Southwest borough has remained one of the city’s poorest neighborhoods. But since the clean-up of the Lachine Canal in the late 1990s, the historically French-Canadian, Irish and Black working-class area has seen the rise of private luxury housing development, uneasily coexisting with the poor-quality housing of long-term working-class tenants. A combination of both large and small-scale projects to green the city throughout the early 2010s have contributed to these growing tensions. With major green developments yet to be realized, most notably the removal of the Turcot multilevel highway intersection on the northern edge of Saint-Henri, it is worth looking at how current green inequities came to be in order to create a city that is both green and equitable for all Montréal residents.

The Lachine Canal cleanup and building boom
Saint-Henri was seared into the minds of many by Gabrielle Roy’s famed 1945 novel Bonheur d’occasion, which evoked the struggle and hardship that has long characterized the area. The closure of the Lachine Canal and the construction of the multilevel highway Turcot interchange dealt a heavy blow to the neighborhood fabric in the 1960s, when the once bustling canal became lined with derelict warehouses, abandoned malt silos and empty red-brick hydraulic energy stations. 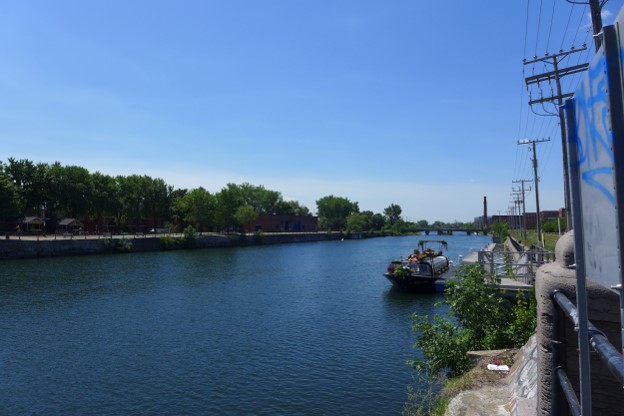 But in the late 1990s, the Lachine Canal underwent a dramatic makeover when over $100 million in federal and provincial funds were designated for its extensive decontamination. That was followed by the transformation of numerous brownfield sites along the Canal in the 2000s with existing buildings like the Chateau Saint-Ambroise converted into creative class commercial space and Le Redpath into luxury lofts. Today, the 14-kilometer long waterway offers one of the best bike paths in Montréal alongside green and blue amenities. As such, the Canal is an exemplary case of a large-scale greening project with visible landscape and neighborhood environmental changes, requiring significant funding that was largely delivered through a top-down process.

The luxury building boom that has since produced a crop of high-end privately-funded developments in the newly rebranded Les Quartiers du Canal has sparked gentrification concerns amongst local residents. Many community organizers believe that the Canal suffered a purposeful cycle of public sector neglect for decades followed by private capital capture of the improved environmental value, a process occurring in other similar urban redevelopments. One local housing organizer pointed out that access to the Canal in Saint Henri had essentially been privatized by new housing developments, given that the lack of low-income housing nearby inherently privatizes access to blue-green spaces. In some places access has been physically blocked through gates and fences.

New condo development along the banks of the Lachine Canal. July 2018. Photo by author.

The St-Pierre Woonerf, a Dutch “living street” concept for pedestrians, cyclists, children, and general green living, has added to Saint-Henri’s appeal. In the late 2000s the Southwest borough council pitched the idea to green a wide grey alleyway and received funding from the Quebec Public Health Agency to create the Woonerf. The award-winning new green infrastructure seeks to combat the heat island effect, an issue of concern in the city’s increasingly hot summers, and is viewed by the borough as a huge improvement in environmental and social terms. 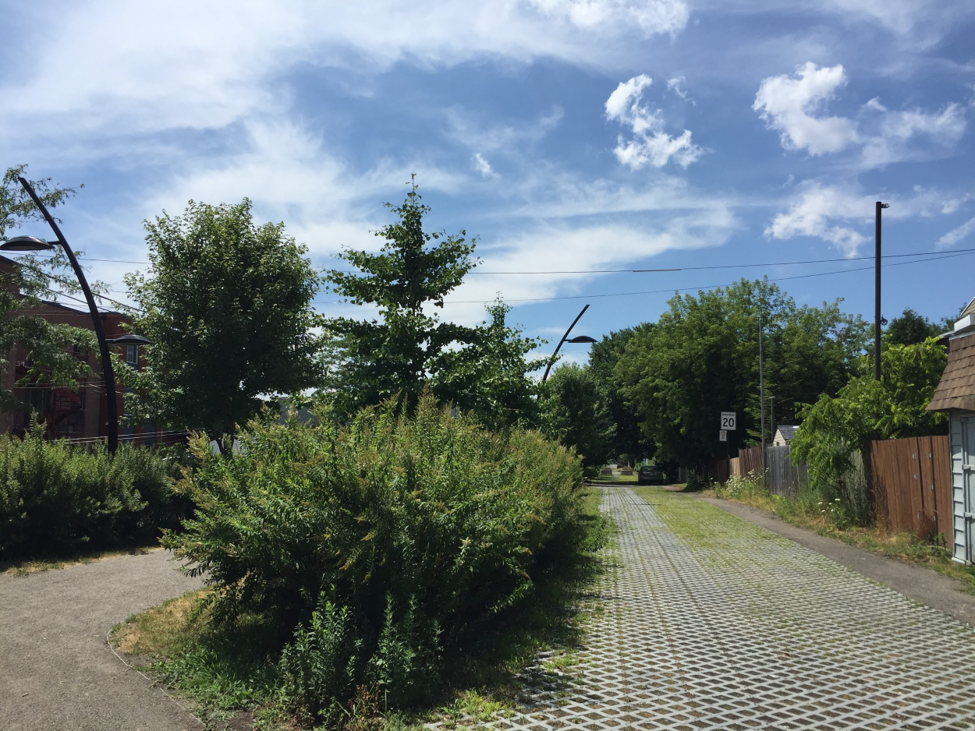 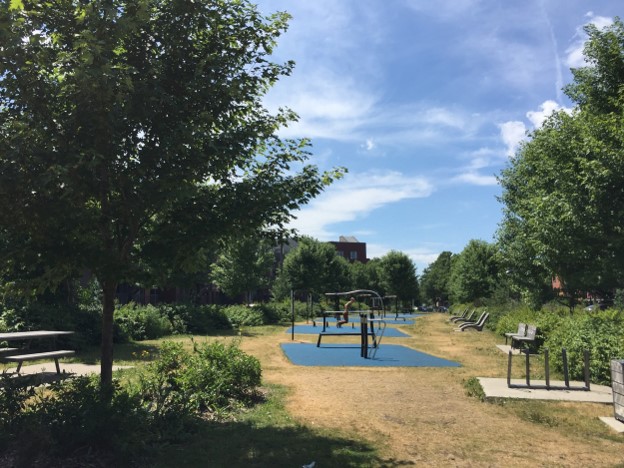 Exercise equipment on the Woonerf, July 2018. Photo by author.

Local housing organizers and community groups disagree with the borough’s vision. This pocket of Saint-Henri was the last frontier of gentrification, located in the most poverty-stricken sector of the neighborhood. While social housing exists along a small portion of the Woonerf, new condo developments have gone up boasting their location on the green street. Local housing organizers note that the new outdoor exercise equipment is largely used by white, middle-class condo owners. Local residents are also critical of the $1.5 million price tag, while the local schoolyard play space looks more like a prison yard.

The Woonerf has generated significant impacts on the surrounding housing stock. Many requests have been made for building demolitions, and several properties along the green street have been converted from multi-unit to single family condominiums. According to a recent article, green gentrification impacts show that 45 per cent of households along the Woonerf have lived there for less than one year. 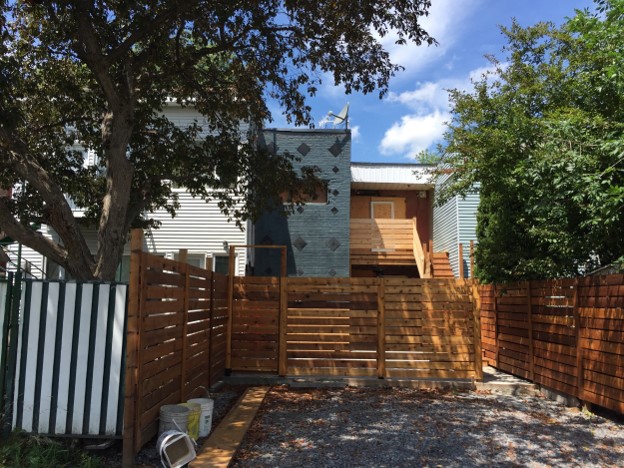 New fences and housing renovations along the Woonerf, July 2018. Photo by author.

Conflicts between grassroots greening and housing needs
These large-scale greening initiatives have occurred alongside more ordinary greening projects. A number of green alleys (Ruelles Vertes) have been developed as part of a citywide program that now totals over 700 alleys. Though such projects are funded by Montréal’s council boroughs, coordinated by local environmental organizations known as Écoquartiers, and implemented by local residents, they have nonetheless triggered tensions between housing rights advocates and environmental organizations over their association with large-scale projects as agents of gentrification. While both agree that real estate developers use green alleys to increase housing prices and market real estate projects, the local environmental organization points out critical differences between the two in process and outcome. According to the local Écoquartier, green alleys in Saint-Henri are driven by alley residents who want to create quiet, pedestrian areas and safe play spaces. It is largely working-class residents, not private condo owners or upper middle-class people in the neighborhood, who push for green alleys.

A Green Alley in Saint-Henri, July 2018. Photo by author.

Ultimately local housing rights and environmental organizations agree that the core issue is not greening per se, but greening with no limits to speculation. In other words, greening must be accompanied by actions to not displace residents and transform the character of the neighborhood.

Community efforts to build equity in Saint-Henri
Though attempts to counter gentrification have been made by the borough and broader city government, they have been largely ineffective. The inclusion strategy, which obliges developers of over 150 housing units to devote15 percent of the stock to social housing, has been ironically dubbed the exclusion strategy by housing activists because it binds social housing development to new speculative construction and displaces people that are not selected for social housing. New policies to include affordable housing exist, but definitions of “affordability” are questionable and penalties for non-compliance are not enforced. Despite increased funding for social housing development – from $1 million to $3 million per year, with a goal to build 12.000 affordable housing units in 4 years – many still feel this is insufficient.

The most effective tactics so far to address gentrification in Saint-Henri have come from local residents. A critical victory was the halt of the conversion of the abandoned Canada Malting Factory into a mixed-use condo development, thanks to mobilizations led by the community coalition À nous le Malting! (The Malting is ours!), who continue to campaign for the site to be used for much-needed social housing for the neighborhood.

Canada Malting, where redevelopment has currently been stopped. The other side of the building strategically gives onto the Lachine Canal. July 2019. Photo by author.

In addition, a coalition of over 20 community-based groups coordinated through Solidarité Saint-Henri, have created a popular development plan (PDPop) that contrasts to the city’s local development plan, as a truly neighborhood-based plan that focuses on securing residents’ right to stay in their homes. With over 2,000 residents involved in its creation, the PDPop proposes infrastructure that low-income residents actually need—a functional school ground, swings for kids, and social housing—rather than prioritizing the Woonerf, exercise equipment for the white middle class, or high-end condos.

More change is undoubtedly coming to Saint-Henri, with another large-scale greening project that will soon remove the multilevel highway Turcot Interchange to make way for a large green space on site. If the city does not listen to local grassroots movements or take greater steps to ensure equity for low-income residents, new greening projects like this one could perpetuate the growing urban (green) inequities that already exist in the neighborhood.

Melissa García Lamarca is a human geographer and a postdoctoral researcher at the Barcelona Lab on Urban Environmental Justice (BCNUEJ), where she explores the financial dynamics driving urban greening, the relationship between development and greening, and community resistance to greening projects.