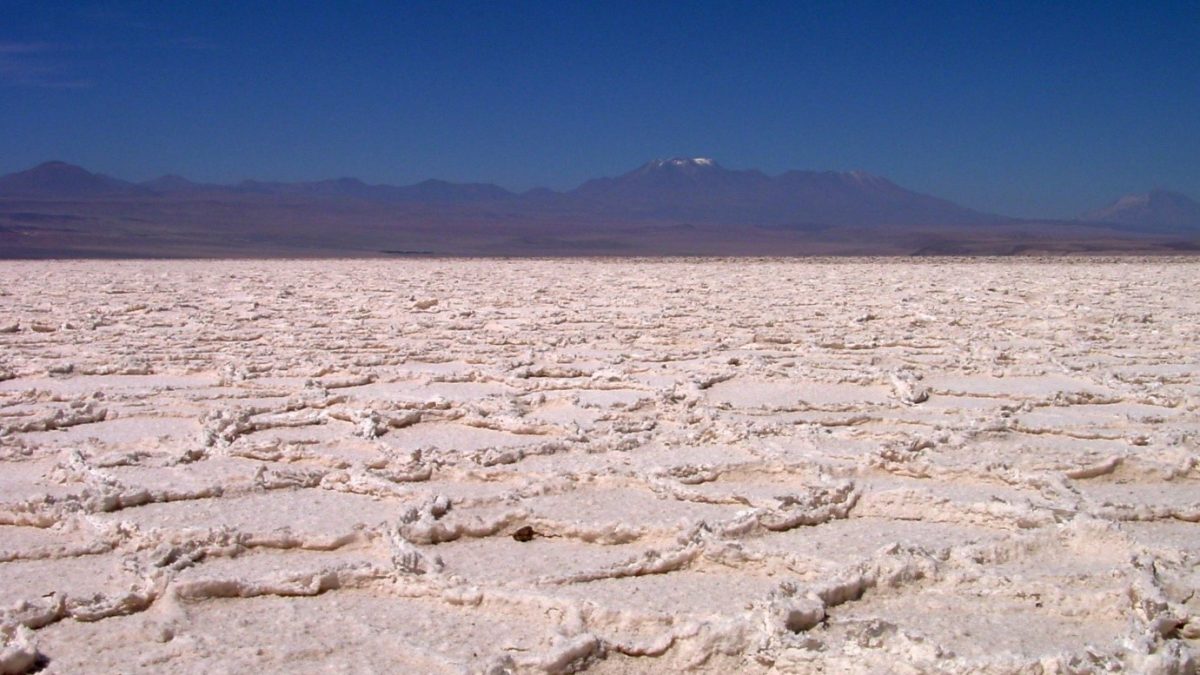 By Diego Andreucci and Christos Zografos

Mainstream climate change mitigation and adaptation policies are imbued with neocolonial discursive constructions of the “other”. Understanding how such constructions work has important implications for how we think about emancipatory and socially-just responses to the climate crisis.

In her 2016 “Edward Said Lecture”, Naomi Klein made the case that “othering” is intimately linked to the production of the climate crisis. Borrowing from Said’s Orientalism, Klein defines othering as the “disregarding, essentialising, [and] denuding the humanity of another culture, people or geographical region”. She argues that this is much needed for justifying the sacrifice zones necessary for fossil fuel exploitation, and for refusing to protect climate refugees. In these ways, othering permits letting off the hook the neoliberal and neocolonial structures of domination that are largely responsible for climate injustice.

Constructing people as not-fully-human, not part of “us”, or as threats—internal enemies, foreign agents, terrorists, obstacles to development, and the like—is a common strategy for legitimising repression against those who resist extractivism and dispossession. Indeed, compartmentalising populations into those who need protection and support, and those who can be sacrificed for the sake of the “greater good”, is what theorists from Michel Foucault to Achille Mbembe saw as the fundamental function of racism, originating in European colonialism. Similarly, Frantz Fanon defined racism as a global hierarchy based on the “line of the human”, which created a distinction between the zone of being (the human) and the zone of not being (the sub- or non-human).

At the same time, the workings and reach of othering go beyond what Naomi Klein suggests. Discursive constructions of populations or territories as “other” are also mobilised to include them within the reach of government action and control. This is typically the case with populations or territories that are constructed as “in need of improving” that, as anthropologist Tania Murray Li has shown, have long underpinned colonial and development interventions. These constructions are no less racist and colonial than those justifying the “need to sacrifice”, yet they are intermeshed with a humanitarian or humanist “will to improve” the other, a reactivation of the imperial discourse of the “white man’s burden”. 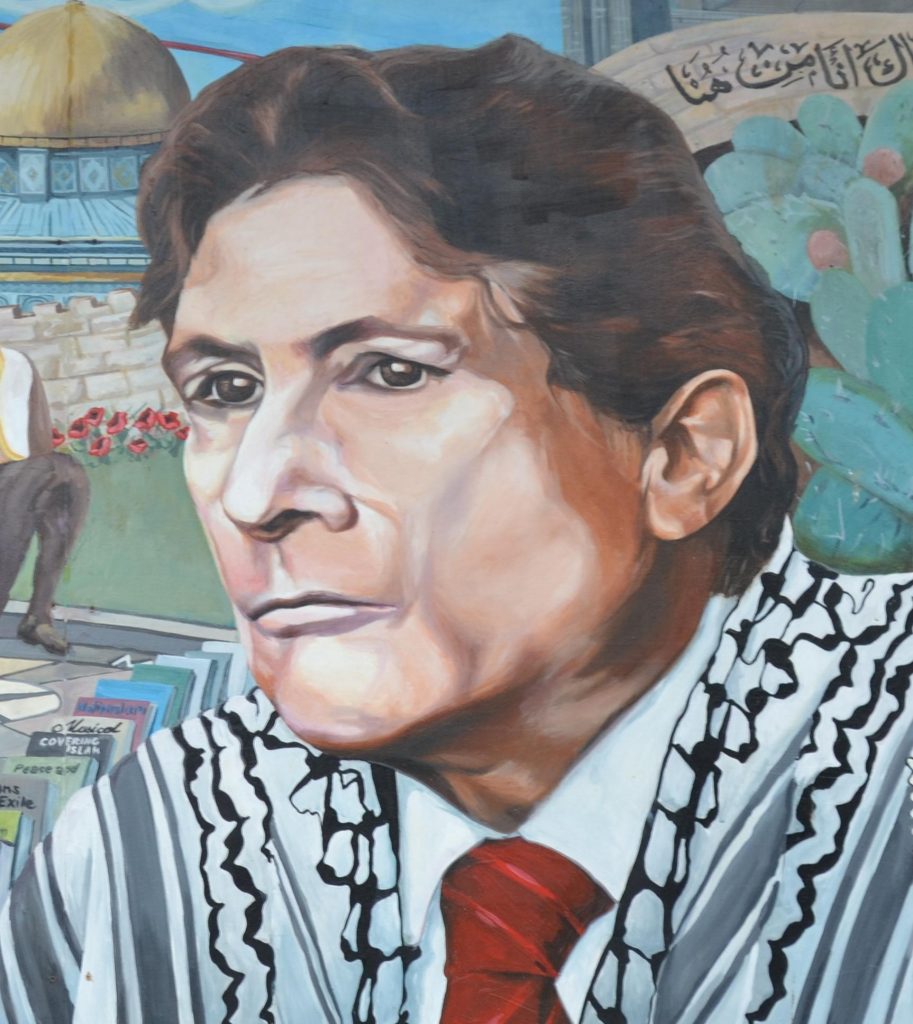 We claim that this ambivalent mobilisation of othering—oscillating between improvement and sacrifice—also characterises mainstream responses to the climate crisis, imbuing them with a neo-colonial and, at heart, racist ethos. Policies for mitigating climatic changes, adapting to them, or governing climate-induced migration, require prior discursive work to frame targeted populations or territories as problematic or deficient, through narratives that stress vulnerability, underdevelopment, and victimhood. At the same time, these interventions are associated with effects of dispossession, environmental destruction and the production of surplus populations and sacrifice zones, and must therefore rely on othering to justify letting such populations die.

Think of climate change mitigation, and its purported goal of shifting away from fossil fuels by aggressively expanding industrial-scale renewable energies and electric automobility. Environmental movements and researchers have demonstrated abundantly that this strategy is problematic. They denounced the dispossession effects of “transition mineral” extraction and large hydropower projects, and the “land grabbing” associated with wind and solar energy generation and biofuel plantations. Such industrial-scale solutions follow a “green extractivist” logic that aims to appropriate as much resources, energy and profits as fast as possible from a territory, irrespective of the social and ecological impacts. As such, they produce dispossession and sacrifice outcomes similar to those of fossil fuel extraction (and don’t fare a lot better in terms of CO2 emissions, as Alexander Dunlap has shown).

Compared to the old, “grey” extractivism of dirty coal and oil, such projects are cast as necessary not only for the improvement of otherwise “underdeveloped” territories and peoples, but also for saving the planet from catastrophic climate change—as research by activist and writer Daniel Voskoboynik demonstrates in the case of lithium. The more urgent and necessary the improvement, the more acceptable the sacrifice, and the more “selfish and irrational” the resistance.

Climate change adaptation is another case in point. While emanating from ostensibly disinterested concerns with the adverse effects of climatic changes upon “vulnerable” groups, it draws upon and reinforces images of the other as both in danger and potentially dangerous. This manifests itself in adaptation policy documents—for instance, by the EU—which construct Africa as a climatic “heart of darkness” of unruly environments, failed institutions, and backwards populations, ready to flood European borders with unwanted migrants.

This type of representations depoliticise vulnerability. They separate it from colonial histories and previous rounds of capitalist dispossession and neoliberal restructuring that created or exacerbated people’s “lack of adaptive capacities” in the first place; and obfuscate the historical responsibility of colonial states and capitalists in the global North for generating the majority of greenhouse gas emissions. Moreover, adaptation interventions seek to make “target” populations responsible for managing the adverse effects of climatic changes, receiving limited assistance (in the form of debt and corporate investments) conditional on their willingness to go along with a pre-packaged plan.

The “improvement” of populations and territories targeted by adaptation programmes has no room for redressing development-induced dispossession; rather, it is expected to work through the dispossession itself. As Markus Taylor shows in the case of adaptation policies in Mongolia and South Asia, urbanisation and proletarianization of rural populations, which result in poverty, indebtedness and loss of access to their means of production and livelihood, are framed by the institutions like the World Bank precisely as a way of reducing small farmers’ vulnerability to climate change, while also freeing up rural space for more mechanised and capital-intensive agriculture.

Discursive constructions of the climate migrant exemplify how the two forms of othering (to “sacrifice” and to “improve”) are deployed in overlapping and contradictory ways. A common way in which othering operates in this context involves the separation between “good” and “bad” migrants. For instance, Andrew Telford has shown how EU and US policy reports on climate-induced migration often represent Muslim and African migrant populations as threats, as racialised others with a potential for radicalization and terrorism.

At the opposite end of the “migrant-as-threat” trope stands the image of climate migrants as victims, which is apparently benign but nonetheless problematic. Victimisation involves representing those vulnerable to the effects of climatic change as powerless and resource-less. This disempowers communities by obscuring the adaptation strategies they already practice. At the same time, it bolsters neo-colonial imaginaries of a silenced other with no agency who, driven by desperation, “easily becomes the unpredictable, wild ‘other’ that threatens ‘us’”—in the words of geographer Kate Manzo. 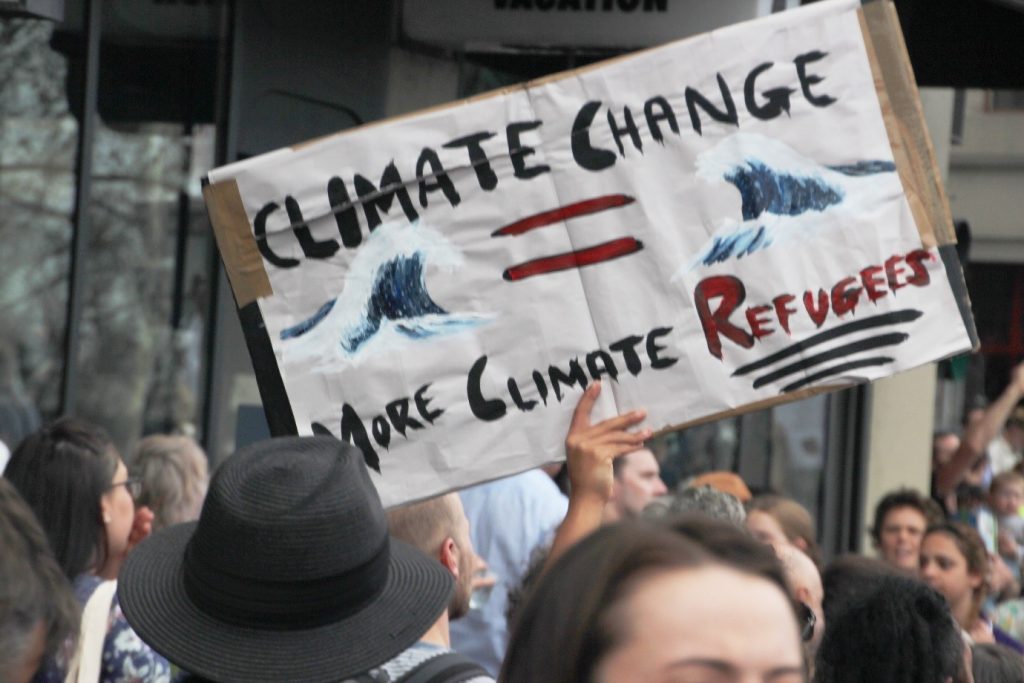 Othering and the Adaptation of Capital

Despite their stated aim to mitigate and adapt to disastrous climatic changes, mainstream climate policies are explicitly envisioned as avenues for furthering capital accumulation. This is obvious in the case of industrial-scale renewables, dominated by transnational energy corporations seeking to expand their markets and diversify their production. But it also applies to the increasingly privatised and financialised business of adaptation, presented as creating opportunities for profit-making and rent extraction. For instance, a report released in September 2019 by the Global Commission on Adaptation—a private-public partnership led by the UN, World Bank and Gates Foundation—calculated that “investing $1.8 trillion globally” in climate change adaption until 2030 “could generate $7.1 trillion in total net benefits”.

What’s more, climate policies are motivated by a geostrategic concern with security. This points to a continuation of the post-WWII “development project”, which was motivated by the threat that newly decolonised populations might turn to communism or Third World anti-imperialism. While the political coordinates have changed, “climate-related development” functions to a large extent as a way of containing the “excess freedom” of surplus populations: stopping them from becoming unruly, or migrating to rich countries (in larger numbers than capital needs).

Taken together, the current choreography of policies and interventions that make up the “climate action” framework can be seen as a way to preserve global capitalist class power in the face of the ongoing climate catastrophe. Othering in this sense is central to the “post-political” governmentality of climate change, a key tenet of which is, for Erik Swyngedouw, “the perceived inevitability of capitalism and a market economy as the basic organizational structure of the social and economic order, for which there is no alternative.”

A central implication of all this is that plans for radical socio-ecological transformation—including Just Transition or Green New Deal frameworks—should not reproduce a colonial logic whereby peripheries (primarily) in the global South are treated as pools for resource grabbing and carbon dumping, or as sites for salvation-type interventions that dismiss frontline community action and priorities. As climate justice activists advocate, there can be no decarbonisation without decolonization.

Challenging the neocolonial and neoliberal government of climate change entails affirming the ability of the subaltern to “speak”: recognising and reasserting the “pluriversality” of “non-Western” socio-environmental knowledges and praxes should be foundational to climate justice. We must be mindful, however, that—as the Aymara theorist Silvia Rivera Cusicanqui has argued—there is more to decolonization than discursive emancipation.

Recognising ontological multiplicity must go hand in hand with the critique of material power asymmetries and global unequal (ecological) relations. Decolonizing means, primarily, giving back the land to indigenous communities and reasserting the sovereignty of formerly colonized peoples, including access to and control over natural resources and other means of production and reproduction—as part of globally connected struggles attacking the material and ideological bases of racial-patriarchal capitalism and imperialism.

* This blog is based on a longer, open access article published in the journal Political Geography.

Diego Andreucci is a postdoctoral researcher at the International Institute of Social Studies, Erasmus University Rotterdam, the Netherlands, and a member of Undisciplined Environments. @diegoandreucci

Christos Zografos is a Ramón y Cajal Senior Research Fellow of the Department of Political and Social Sciences at Pompeu Fabra University in Barcelona. He is Vice-Director of GREDS (Research Group on Health Inequalities, Environment, and Employment Conditions), and Executive Board member of the Johns Hopkins University – Pompeu Fabra (JHU-UPF) University Public Policy Centre.

Featured image: The Atacama salt-flats in Chile are a hotspot of lithium extraction, a major source of conflicts with local indigenous communities over access to water. Credit: Bachelot Pierre J-P. Source: Wikimedia Commons.