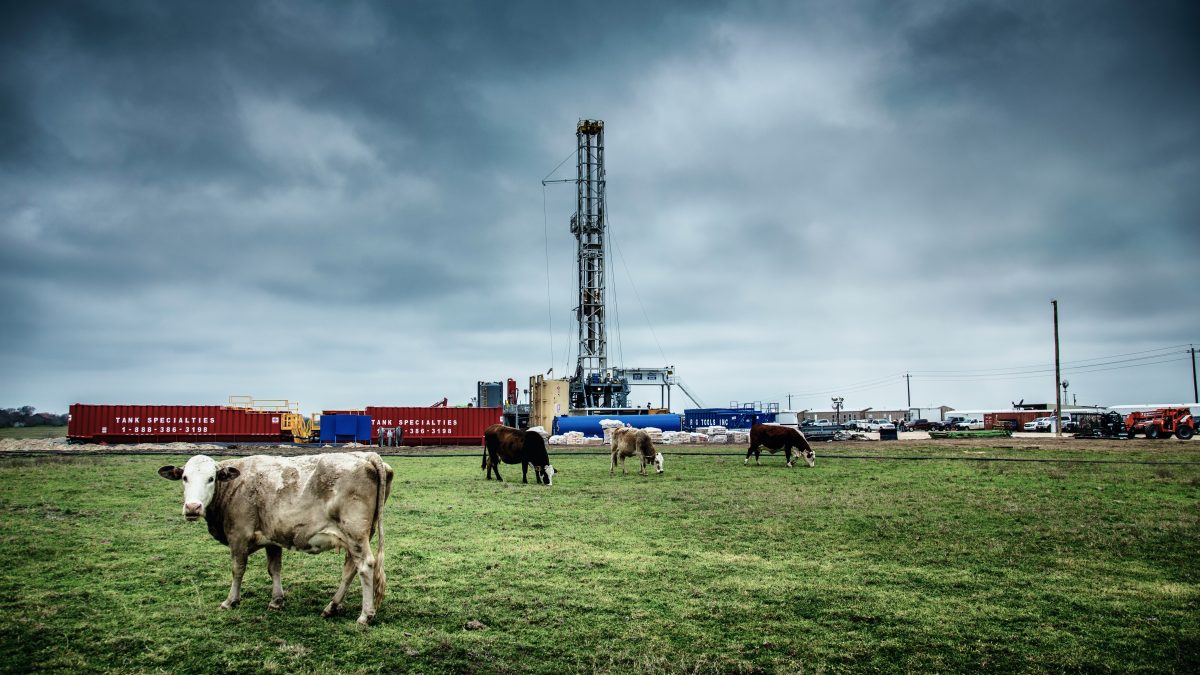 By Marta Conde and Diego Andreucci

Movements aiming to resist or reform resource extractivism are necessary, but they must converge with broader struggles to overcome capitalism and its entrenched patterns of class, racial and patriarchal domination.

Our economies depend on extractivism—an accumulation strategy based on the intensive extraction of minerals and other natural resources, primarily for export. Extractivism is intimately linked with imperialism and with global patterns of uneven development and wealth distribution, established since colonial times.

The plunder of colonies or former colonies allowed more industrialized, “core” countries, particularly in Europe and North America, to import “cheap” metals and materials they then transformed into high value-added products, achieving higher levels of wealth and avoiding some of the gravest environmental and social costs of intensive extraction. This has locked resource-rich countries in “peripheral” regions into a neo-colonial, extractivist path, often associated with high levels of poverty, conflict and environmental degradation.

Disguised under a narrative of (resource-based) “development”, extractivism has been aided by the imposition—on the part of imperial or core countries and international financial institutions—of lenient environmental legislation, favourable taxation, and low labour costs. These processes were associated with the global neoliberal restructuring that took place in the 1980s and 1990s, which increased investment in extractive sectors in the so-called global South substantially. Due also to increased demand from Asia and rising commodity prices, after 2000 many countries experienced an unprecedented extractive boom.

Extractivism is associated with harmful socio-environmental impacts, which are felt unevenly and intersect with—and reinforce—pre-existing forms of class, racial and gender injustice. Yet extractive frontiers do not advance unopposed. On numerous occasions, communities living near the projects react to the socio-environmental and cultural impacts on land, water, ways of life and livelihoods, as documented by collaborative mapping projects such as the Environmental Justice Atlas and others.

Political ecologists have dedicated much time and energy to discussing alternatives to extractivism and development, particularly in Latin America where this has been a central focus of debate and mobilization in recent years. Here we complement these discussions by offering some tentative reflections on (the connections between) four existing pathways for anti- or post-extractivist struggle: the “right to say no”; reducing demand; nationalization; and resource “sovereignty”.

The “Right to Say No”

A central demand put forward by indigenous and peasant movements globally is that communities should be allowed to decide whether or not they want an extractive project on their land or territory. The International Labour Organisation Convention 169 formally recognized this principle in 1989, providing indigenous groups with a legally binding tool for negotiating with their governments, in states that ratified the convention. This principle entails a collective right to “Free Prior and Informed Consent”; that is, to have clear information and to participate in decision-making processes, giving communities the right to veto extractive projects or set their terms for accepting them.

The application of the principle of Free Prior and Informed Consent, however, has presented many problems. Many communities claim that, even when recognized in national constitutions or legal frameworks, this principle is often ignored or misapplied. Industry and state officials often interpret this principle in diluted terms, not aiming to obtain consent but simply “performing” participation, and using diverse tactics for manipulating the results of consultation processes.

The limitations of such processes are pushing local groups to look for alternative ways to enforce the “Right to Say No”, an evolving idea put forward by members of the Umgungundlovu community of Xolobeni in South Africa. In order to challenge the colonial legal legacy that ignores their customary laws and practices, community members approached the High Court to avoid losing their land to an Australian mining company. The Right to Say No, which comprises diverse strategies and demands in different regions and parts of the world, places consent as a central aspect of intersectional resistance against capitalism and patriarchy, as well as challenging colonial views of nature as a resource for the market. This proposal also embodies a variety of alternatives that communities are saying “yes” to, for the construction of “post-extractive” societies.

Demand for resources from more industrialized regions is a key driver of extractivism. Reducing resource demand is necessary to give way to alternative modes of organising society-nature relationships. In the so-called global North, several proposals in this sense are emerging from “degrowth” movements, centred on promoting a radical re-organisation of the economy that includes a sharp reduction of material and energy consumption in industrialized countries.

A concrete proposal for reducing resource demand has been developed, for instance, by the Resource Cap Coalition, a network of more than 30 European social organisations. These organisations have been exploring the idea of limiting the use of certain products through setting “caps” on extractors and importers as well as quotas on fossil fuel use. A big question, however, remains: Who establishes these caps, and how? The coalition loosely proposed these should be decided using “multi-criteria”, bottom-up processes as much as possible. But the risk remains that one authority might end up having excessive control over who consumes what.

Democratic decision-making is a central concern. A central aim of degrowth is that reduction in material consumption is democratic and fair, promoting radical redistribution. This implies a commitment to global justice and the repayment of “ecological debt.” It is also accompanied by the recognition of the coloniality of development as well as its domination by Western science and ways of thinking and seeing, pointing to the need to recognize and give space to other knowledges and voices. Following ecofeminist ideas, degrowth also insists that decisions around resource use cannot be oriented to the need of the capitalist “market”, but should place life and social reproduction at their centre. 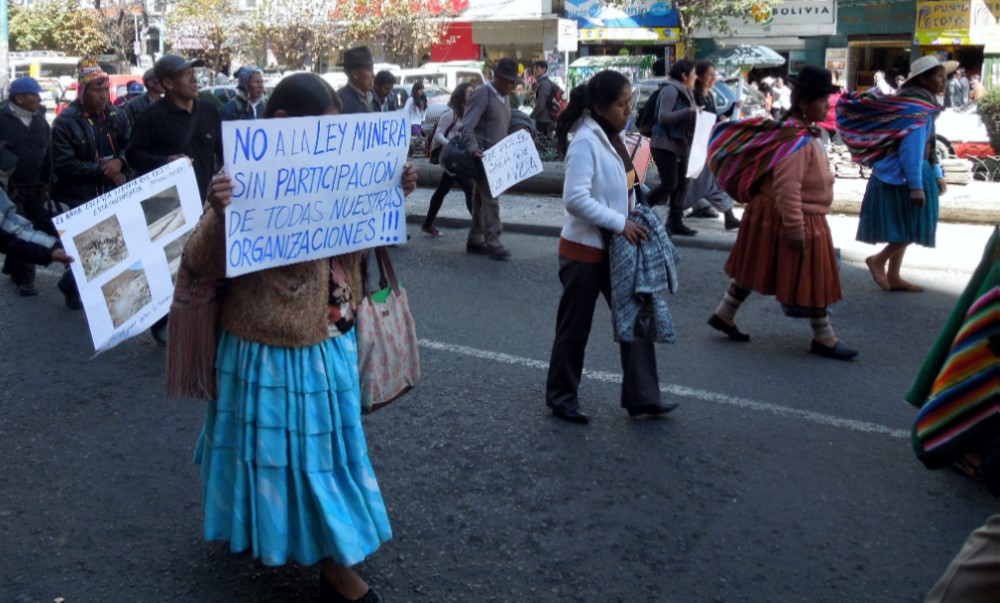 Nationalization has long been a keyword in debates around resource imperialism and resistance to it. Pushed out of the public debate during the neoliberal reaction of the 1980s and ‘90s, nationalization reappeared forcefully on the political agenda at the turn of the twenty-first century, thanks primarily to Latin American social movements. The progressive political formations that came into power in Bolivia, Ecuador and elsewhere placed resource nationalization at the centre of their reform strategy. This has been in many ways a historical achievement, showing the ability of organized mass popular movements to stand up to the dictates of imperial powers and Washington-based international financial institutions like the IMF and World Bank.

At the same time, some of the ambitions that accompanied nationalization—that it would allow a transition to industrialization and democratize resource governance—were clearly in conflict with internal and external pressures to deepen rather than reduce extraction. Paradoxically, the dependency of these countries on transnational extractive capital increased in the last 15 or 20 years. As extractive frontiers expanded, this became a growing source of socio-environmental injustice and conflicts, fuelling political tensions.

Many political ecologist in Latin America denounced these governments as endorsing a brand of “progressive neo-extractivism”, whereby social programs functioned as little more than a strategy for obtaining consent around a growing extractive imperative. Yet, despite their contradictory character, there are important positive lessons to learn from these processes. A nationalized sector can indeed still behave according to market logics of competition and externalization. But nationalization is also a step in the direction of asserting popular sovereignty over important “use values” and means of production and livelihood: in other words, towards “socializing” or “democratizing” natural resources.

This points to the centrality of complementing national scale nationalization processes with bottom-up struggles for democratizing resource extraction and management. An instance of this is the idea of “community mining” put forward by CONAMAQ (National Council of Ayllus and Markas of the Qullasuyu), one of the main indigenous federations in Bolivia. Involved in the collective formulation of an ambitious social movement proposal for constitutional reform in 2005-2007, CONAMAQ insisted for the recognition of the principles of “shared property” and “co-management” of natural resources.

According to this proposal, key resources, such as minerals in the country’s resource-rich highlands, would be owned and managed jointly by the state and community organizations, determining the extent and modalities of extraction as well as of the distribution of benefits and burdens. Communities would also be involved directly in the extraction process, building on a long tradition of small scale and cooperative mining in the Andes. This could entail that a part of mining would be community based, and another part would be state-owned, with a significant degree of worker and community control.

In many respects, this proposal resonates with the well-known principle of “food sovereignty” put forward since the 1990s by peasant organizations such as La Vía Campesina. Unlike the mainstream and depoliticized notion of “food security”, this principle asserts that rural communities who work the land should decide how to produce and distribute food.

This entails a strong critique of the commodification and privatization of land, labour and other use values, such as seeds or water. In short, food sovereignty posits that the main means of agrarian production and livelihood should be held and managed in common. Similarly, proposals like the one by CONAMAQ, and surely by many other indigenous movements, could be interpreted as reasserting and re-signifying natural resource sovereignty—as a bottom up, democratizing process.

The only way forward

As inspiring as the above examples can be, the principles and objectives they put forward remain very ambitious. Are we naïve in thinking that local or even national movements can overcome the power of corporations and big investment funds, and their grip over the state? Are we ignoring the structural power of capitalism, of imperialism and of global class and dependency relations established through centuries of colonial and neo-colonial domination?

These are indeed huge challenges. Some of the principles and initiatives introduced above are often formulated as policy proposals directed to the state, leaving to the latter the responsibility for their implementation. They assume, erroneously, a complete (rather than “relative”) autonomy of the state from both the pressures of capitalist interests and the dependency of the state itself on such interests (including, for instance, reliance on mineral rents).

Challenging extractivism needs much more than reform or wishful policy design. It also entails overcoming the moment of resistance to extraction and the pursuit of localised, “post-extractivist” alternatives. Getting out of extractivism means getting out of capitalism and its entrenched patterns of colonial, racial and patriarchal domination and oppression.

While all of these tactics are necessary and deserve support, they need to be accompanied by a shared vision for post-capitalist transformation, a universal horizon for radical struggle. Today more than ever, anti-extractivist movements of various kinds need to articulate with working and popular class struggles as well as with struggles against racial and hetero-patriarchal domination, through intersectional solidarities and alliances, and the elaboration of a renewed sense of comradeship.

This is no easy feat, as capitalism’s divide and conquer strategy constantly pits poor against poor, oppressed against oppressed. Yet all the exploited and dispossessed of the world have a common, objective interest in the same struggle: the democratization of the means of social reproduction; food, energy, water and resource sovereignty; and the centrality of production for need rather than for profit. This, incidentally, is also the only hope we have to stop “catastrophic climate change”.

Marta Conde is a postdoctoral researcher at “Pompeu Fabra” University in Barcelona, Spain, investigating social opposition to resource extraction, and the co-coordinator of the Recercaixa-ACUP project ‘Activism Mobilising Science’. @m_condep

Diego Andreucci is an editor of Undisciplined Environments and a postdoctoral researcher at the International Institute of Social Studies in The Hague, The Netherlands. @diegoandreucci