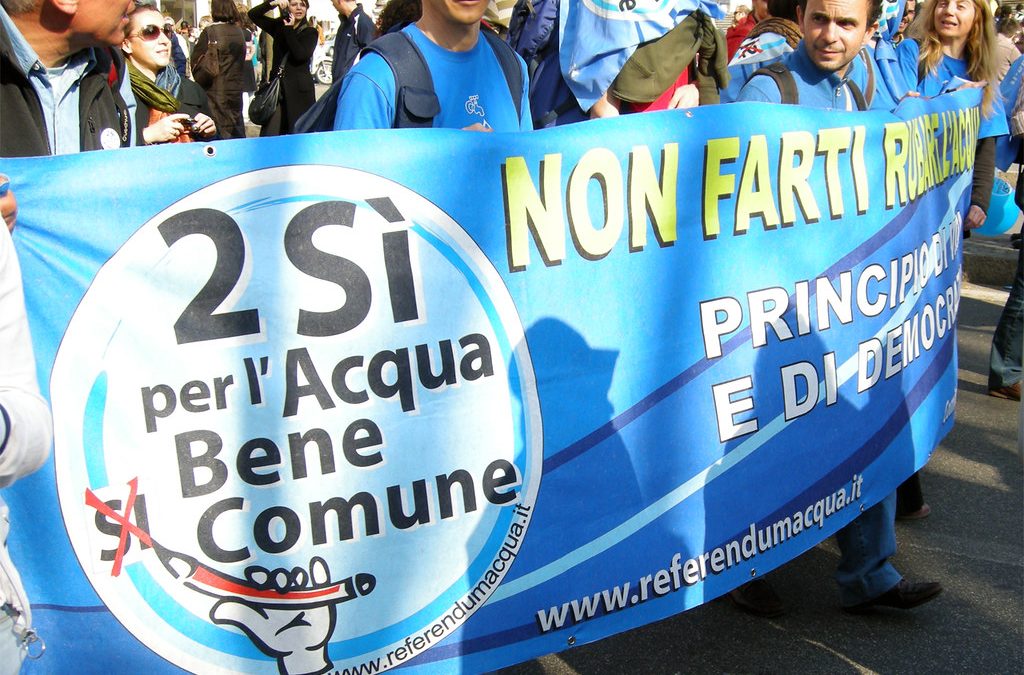 In Italy, the success of the referendum against water privatisation pushed many social movements to reframe their struggles – on labour, education, debt, land use…. – in the name of the commons. Emanuele Fantini explores the legacy of that season in a podcast, here presented for the series “Reimagining, remembering, and reclaiming water: From extractivism to commoning”.

Ten years ago, on the 12 and 13 of June 2011, the Italian water movement won, in the name of the commons, a referendum against the privatisation of water services. To many, that victory looked rather unexpected. In the twenty-four referendums held in Italy since 1997 the required quorum of 50%+1 of the voters had not been attained. During the electoral campaign, mainstream media neglected or explicitly silenced the information on the referendum’s topics. Nevertheless, the turnout reached 54.8% of the voters with an overwhelming majority (95%) of yes to the two referendum’s questions: the first asked to abolish the obligation for local authorities to contract out the local public services to companies (public, private or mixed); the second asked to abolish the 7% profit rate that was included in the water services tariff. Combined together, these two questions, according to the proponents of the referendum, would have put a halt to the privatisation and corporatization of water services provision in the country.

Different understanding of the commons

How did the Italian water movement manage to mobilise the majority of the voters on those rather technical issues? The symbolic value of water has definitely been instrumental in putting and holding together a vast coalition of actors under the umbrella of the Italian Water Movements Forum: alter-globalisation activists, local authorities, trade unions, missionaries and parishes, local civic committees, consumers associations… Such heterogenous coalition found common ground around the principles of water as human right and commons. However, the plurality within the movement also resulted in different meanings being associated with the commons. In a previous research with Chiara Carrozza, we identified at least three understandings of the commons coexisting and sometimes overlapping in the Italian water movement claims and practices: the universalistic idea of water as commons of the humankind; the localistic claim of water as commons of the territory; and the more radical approach of water as commons beyond the public and the private, emphasising people participation as an alternative to both the state and the market.

Water as paradigm of the commons 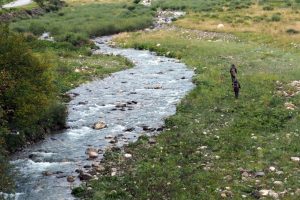 The Italian water movement motto “You write it water, you read it democracy” contributed to the transformation of the struggle for public water into a paradigmatic battle against the privatization and commodification of the commons. Thus, in the aftermath of the referendum, the polysemy of the commons and the will by other political actors to emulate the success of the water movement, paved the way for the commons to become a key word in the Italian public debate. Traditional struggles, like labour or public education, begun to be framed as struggles for the commons. Some were discussing the opportunity of creating a “commons party” to compete in national and local elections; others started to include explicit reference to the commons in the official programs of mainstream political parties. Several municipalities introduced the post of “councillors for the commons”. Theatres and other buildings were occupied and transformed into commons. Articles and books on the commons flourished in the cultural and academic debates.

Such a proliferation of references to the commons is stunning, particularly if one considers that the Italian water movement found it very hard to ensure the actual implementation of the referendum’s results: indeed, the obligation for local authorities to contract out the water services was abolished, but only very few of them initiated the process of transforming the water services companies regulated by private law into water agencies under public law.

Ten years after, what is left of that political season where the commons gained unprecedented popularity? I have asked that question to activists, journalists, representatives of local authorities and researchers. Inspired by the title of this blogpost series, the idea is to remember what happened ten years ago before and after the referendum, in order to reimagine the conditions, possibilities and spaces for similar mobilisations to reclaim water and other commons, particularly in the context of global crisis like climate change or the Covid19 pandemic.  So, I asked my interlocutors: what were they doing ten years ago during the referendum campaign? How did they pursue their commitment for water or other commons after the referendum? And finally, what has that experience taught them, and how can it be relevant for other struggles?

Some of the answers are presented in a new podcast, “Si dice acqua” (“You call it water”). The idea of podcasting as a research tools stems from my previous experience with the podcast The Sources of the Nile. It later developed through a reflection on three features of podcasting that revolves around voice. First, listening to the voice of your interlocutors as a way of practising active listening skills. Second, the ethical and political implications of editing the voice of your interlocutors into a publicly broadcasted podcast. And third, the practice of sharing the podcast as a way to create and nurture a community of interest and practice.

The first three episodes are already online and you can listen to them on the podcast blog, on Spotify or on Google Podcasts. The first episode sets the scene, recalling the success of the referendum stands on more than ten years of social mobilisations to promote a new water culture in Italy. The second episode explores how the movement connected different scales, the local and the global, thinking about water as commons of the humankind. Episode 3 tells the story of how the referendum campaign in several cases built on pre-existing mobilisations to preserve local commons, for instance mountain rivers against the proliferation of mini-hydroelectric plants. The next episodes will explore the idea of the commons beyond public and private, the role of knowledge and academic disciplines on the commons, Catholics and other religious groups in the mobilisation for public water, and gender issues in the management of water and other commons.

I am grateful to IHE Delft Water Governance Department that allowed me time and funds to pursue this research, to Daniele Madio who designed the podcast logo and to Maria Conterno – aka Kaleidoacustics – for the sound mix and editing, to the magazine Una Cittá that is currently publishing the full versions of the interviews, and of course to all the people to whom I talked for the podcast and the listeners who shared their feedback and ideas to improve it: keep doing it!

Emanuele Fantini (e.fantini@un-ihe.org) is Senior Lecturer / Researcher in Water Politics and Communication in the Water Governance Department at IHE Delft. He is the editor of IHE Delft Water Governance blog, FLOWs, and he hosts the podcasts “The sources of the Nile”, “Water Alternatives Podcast” (with Emilie Buist) and “Si dice acqua”.