In his new book “Fighting for Water: Resisting Privatization in Europe” Andreas Bieler analyses the struggles against water privatization in Europe since the early 1990s. In this post for the series “Reimagining, remembering, and reclaiming water: From extractivism to commoning” he explores to what extent these struggles point towards a potential future beyond capitalism.

To what extent do movements against the privatization of water services across Europe offer an alternative to the dominant neoliberal, capitalist model of water services management? This is the question that my book Fighting for Water: Resisting Privatization in Europe (Zed Books/Bloomsbury), published today, seeks to answer. Drawing on the cases of the Italian referendum in 2011, the European Citizens Initiative on water as a human right in 2012/2013, the ongoing Greek struggles against water privatisation and the successful Irish campaign against water charges from 2014 to 2016, the book documents alternative models which build on principles of water as a commons, a re-conceptualisation of the public, and participatory democracy.

Water as a commons

One of the key contributions of the Italian water movement in its referendum campaign against water privatization in 2011 is that it raised the issue of water as a commons: as jointly governed, jointly enjoyed and jointly preserved for future generations. This way of organising water management goes beyond the dichotomy of private versus public. It includes a direct link to forms of participatory democracy resulting in the movement’s motto: “It is written water, it is read democracy”, as put by Emanuele Fantini. It is this combination of a new understanding of democracy and a new way of how to run the economy and, importantly, of how these two dimensions are closely and internally related, which brings with it a transformative dimension beyond capitalism.

Exploring solutions around the notion of the commons combined with participatory democracy was also part of struggles against water privatisation in Greece. The activists of the group K136 in Thessaloniki devised a plan for joint ownership by all citizens in 2013. If every household connected to the city’s water services bought a non-transferable share in the municipal water company, the public could acquire this water and sanitation company. Collective management would be based on a system of neighbourhood cooperatives coming together in a single overall cooperative, administered through forms of direct democracy.

This focus on the commons, however, was not picked up by other activists across Europe. It is difficult to see, many pointed out, how the requirements of organising water services in a city of several million people can be met by community collaboration alone. What became more widely relevant, however, was the emphasis on direct, participatory democracy. As activists understood, public ownership and re-municipalisation in themselves do not signify that water services are well managed. Re-municipalisation can take different forms including public companies, which operate like private corporations focusing on maximising profits. Hence, public ownership needs to be democratised to go beyond the problems of public utilities in the past as well as commercialised public services in the present.

And there are progressive examples across Europe, in which such a democratisation of water management is being explored. The Italian city of Naples, as soon as it had transformed its water services into a fully public company in April 2013, embarked on experimenting with ways of bringing on board workers’ expertise and civil society’s voices in the running of the company. Other examples of experiments include the Spanish city of Zaragoza, where trade unions signed an agreement with other civil society organisations, political parties and the municipality for public water management in order to secure the human right to water in 2014. In Paris and Grenoble, ‘civil society representatives sit on the Board of Directors together with local government representatives, and have equal voting rights …; [moreover,] citizen observatories have been established to open spaces for citizens to engage in strategic decisions on investment, technology options and tariff setting’ report Lobina, Kishimoto and Petitjean. These experiments are not without difficulties. In Naples, for example, water workers have been sceptical whether social movement activists would have the necessary technical knowhow to participate in water management. Nevertheless, they are concrete attempts at democratising the running of public water services. 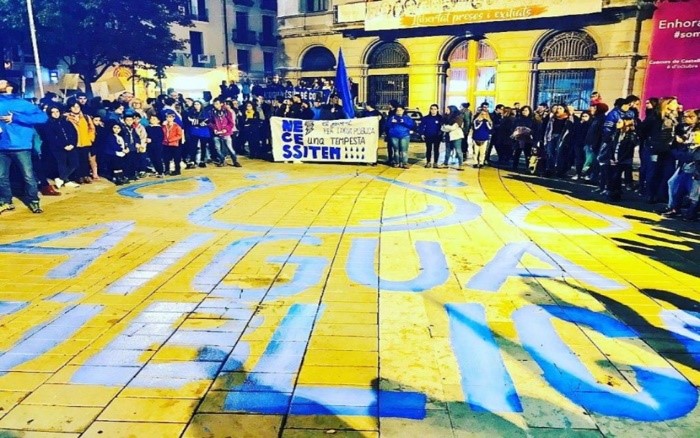 The democratisation of water services management was pushed towards new dimensions by a municipality in Catalonia, Terrassa.decided to bring water back into public ownership in 2016, which came into effect in December the same year after the end of the 75-year long private concession. The innovative moment of these developments is not simply the fact of re-municipalisation, but the way of how water activists and social movements have engaged in a process of designing a new model of managing the city’s water services.

Initiated by the Citizens Parliament of Terrassa, the Terrassa Water Observatory was established after lengthy negotiations in spring 2019. Its work consists in consulting, advising, deliberating and making proposals; the Observatory can also ‘carry out studies and produce reports and recommendations on water management’. This Water Observatory represents a space for co-producing political processes, creating a system of governance driven by the question of how one can guarantee the human right to water. Re-municipalisation in Terrassa, thus, is not only a technical issue, it is also a democratic one. Importantly, participation empowers citizens. Who knows, this may trigger a process, which could lead to similar development in other areas?

As I learned during my field research for this book, a well-structured, efficient public sector service such as water instils tremendous pride in one’s own profession. ‘I am proud to work for a company, which has as its main objective the provision of a high quality, affordable service to Naples’ citizens’ said an engineer of the water company ABC, whom I interviewed for the book. While showing me the wider infrastructure of water services in Athens, another interviewee casts his eyes over the large water aqueduct ensuring the supply of five million citizens in Athens with high quality drinking water. There is a clear sense of pride about what can be achieved from within a public company. It is this kind of commitment combined with social objectives, which public companies nurture and which makes public-public partnerships based on public sector values so important unlike the profit-driven public-private partnerships advocated by capital.

The shift from a focus on the commons to discussions over how to democratise the delivery of water as a public service should not necessarily be regarded as a move away from radical transformation. ‘Strengthening the democratic, public character of water services is fundamentally at odds with the currently dominant neoliberal model of globalisation, which subordinates ever more areas of life to the harsh logic of global markets’, concluded Bélen Balanyá and his colleagues already in 2005. 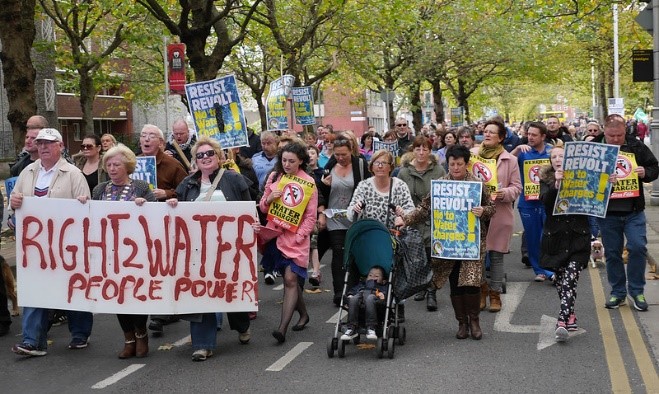 The Irish case of water struggles exemplifies best this transformative dynamic of democracy. As part of their struggle against the introduction of water charges between 2014 and 2016, Irish community groups questioned representative democracy and started experimenting with alternative forms of decision-making. They frontally challenged the nature of representative liberal democracy, which ultimately provides the political institutional setting that is internally related to neo-liberal economics and thus sustaining the dominant mode of exploitation and surplus-value creation. As always, experiments can work, but they can also go wrong. What remains important, however, is the realisation that working through representative democratic institutions is highly problematic, if you want to pursue fundamental change.

In short, when it comes to solving economic, political and social problems associated with global capitalism, there is a new political creativity related to experimenting with forms of participatory democracy in public water management, which has potentially transformative implications.

Andreas Bieler is Professor of Political Economy in the School of Politics and International Relations and Fellow of the Centre for the Study of Social and Global Justice (CSSGJ) at the University of Nottingham, UK. He is author of Global Capitalism, Global War, Global Crisis (together with Adam D. Morton) (CUP, 2018) and Fighting for Water: Resisting Privatization in Europe (Zed Books, 2021).