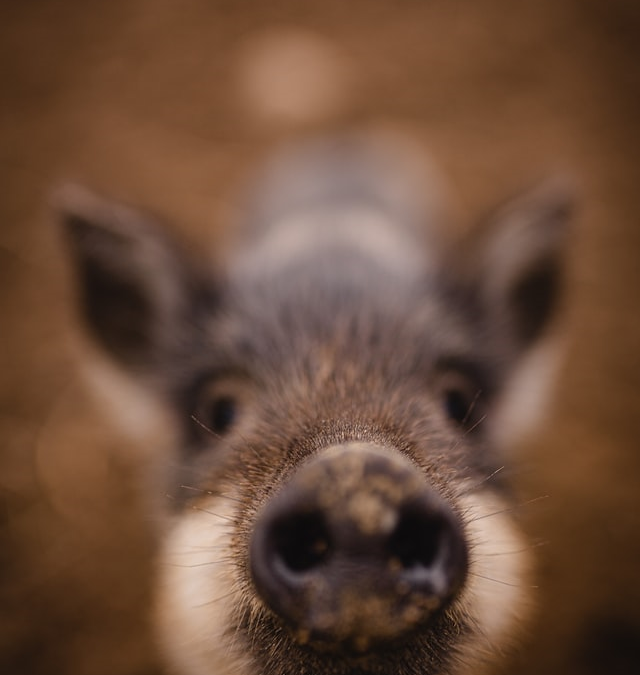 Is human speech a prerequisite to the ethical recognition of beings? The film about the life of a sow called Gunda, invites us to look beyond speech, into emotional, communicative more-than-human relations.

“My disbelief was not just existential but ethical—this wasn’t happening, couldn’t be happening. The world was not like that! The creature was breaking the rules, was totally mistaken, utterly wrong to think I could be reduced to food. As a human being, I was so much more than food. It was a denial of, an insult to all I was, to reduce me to food.”  – Val Plumwood, The Eye of the Crocodile, 2012, pg 12

The film Babe, based on the novel entitled Sheep-Pig by Dick King-Smith, and one of Val Plumwood’s muses in her philosophical writings on what it means to be food, brings to our attention a piglet as an emotional and communicative being. It tells an often dark yet romanticised story of the inner life of a family farm, where an exceptional ‘sheep-pig’ has gained a status as a communicative being in the eyes of the sensitive farmer. However, is the power of communication through speech itself the only marker of value in a ‘communicative model’ of ethical relations? Or as the Australian environmental philosopher Plumwood (2012) suggests in her posthumously published The Eye of the Crocodile: can we recognise the inherent anthropomorphic bias from which the idea of a ‘communicative status’ comes and be “sensitive to communicative capacities within species as well as to their capacities for communication with humans”?

Communicative status, Plumwood argues, is ambivalent. The power of communicative status, or in other words the recognition of other beings as ethical subjects, is not fixed and shifts across multiple intersections of human and non-human social categories. It can be given and taken away, and therefore, as a marker of legitimacy or recognition, can be both liberating and oppressive. Laden with anthropomorphic bias, Plumwood (2012: 65) argues, that these power arrangements criss-cross human-nature boundaries:

“Rationalist models which treat communication as an exercise in pure, abstract, neutral and universal reason, and which delegitimate the more emotional and bodily forms and aspects of communication, operate to exclude non-humans from full communicative status just as they exclude various human others accorded lower human status as further from the rational ideal.”

The experimental film Gunda, tells the story of a sow called Gunda and her life on what seems to be an idyllic Norwegian farm, but chooses not to comply with the anthropomorphic communication of human speech i.e. humans and their talk are almost completely absent. The film, released in 2020 and directed by Victor Kossakovsky, provides an intimate lens upon the life, death and struggles of non-human animal life on the farm, through which we witness curiosity, playful teasing, careful exploration, determination, ecstasy, mutually beneficial fly swotting and gleeful, frantic feeding. The daily life of Gunda and her brood of piglets is interspersed with the life of chickens and bullocks. Released from the cowshed, the bullocks leap and dance ecstatically as they race into the field. In a calmer moment, the camera focuses in on each bullock’s face, as the bullock quietly stares back, its eyes patiently moving with the camera. Chickens, arriving in a cage, are released into the meadow and we follow their tentative steps through the tall grass; through the hazy, summer light, filled with insects. We watch a lonesome one-legged chicken struggle along the uneven ground, in the shade of an old tree, casting dramatic shadows. These stories are interwoven into the narrative of Gunda and her piglets as they grow, forming personalities and friendships. Wallowing in the cool mud, Gunda rests. Too soon, human sounds enter the so far predominantly non-human animal soundscape, and you already know what is about to occur. The screaming piglets are carried away in a crate, Gunda rushes behind the tractor but cannot see the piglets, she can only hear them and is panicked and confused. Soon their screams can no longer be heard and Gunda can only circle the pen painfully looking for the piglets which only a few minutes ago had been at her side. Sometimes rushing in panic, to find some clue of their existence; sometimes stopping to listen, to sense their presence. Her anguish and desperation are powerfully conveyed through her movements and sounds of pain; through her, as a communicative being. The film didn’t need speech to bring this into our field of recognition. A close, slow attention upon the emotional and social lives of a family of pigs, a herd of bullocks and a group of chickens, enabled a consciousness of the sociality of non-human animals, as ethical subjects, individuals yet interconnected.

Throughout watching the film however, I noticed a compulsion in both myself and my mum, to narrate for the animals, to give voice to what we witnessed – the fear of entering into unknown territory, the joy of running and jumping, the playful wrestling with siblings – we couldn’t help ourselves but to narrate their emotions, thoughts and conversations, as if to make up for the perceived ’silence.’ Yet, as the film progressed we became quieter, as if the need to ‘give voice’ or ‘make legible’ the actions and behaviours we were watching, became less and less, until we silently, watched with horror Gunda’s loss.

Gunda’s life, unlike Babe’s, was not exceptional. She perhaps represents the more fortunate of sows who are bred to produce pigs for meat consumption. One who has the freedom to move, beyond the standard enclosed space of a gestation or fallowing crate, and one who can wallow in the mud and enjoy the sun and the rain. Perhaps, when these piglets become meat, they are labelled as ‘organic’ or ‘free range’ or given another ethical label reassuring the consumer of the pig’s welfare. Arguably, the emphasis this film placed upon the non-human forms of communication and sociality, enabled an interesting reversal of what the film Babe attempted to do. Instead of giving Gunda communicative status as prescribed by anthropomorphic ideals of speech, the film invited us humans into the euphonic, corporeal, subtle, watchful and communicative experience of Gunda’s life. Giving primacy to the more-than-human soundscape that encompassed the life of the non-human animals on the farm, allowed me to reflect upon both how much I looked for and depend on human forms of communication, and how much we might miss because of this dependency.

It is perhaps easier or simpler to ignore these deeply emotional forms of communicative being and imagine.  But as Plumwood elaborates, “This is the ultimate human supremacist illusion. The reality is we are both of us in both worlds at once” (Plumwood: 37).

Enid Still (enid.still@uni-passau.de) is a PhD student at Passau University, Germany, and a Marie Sklodowska-Curie Fellow as part of the Feminist Political Ecology network WEGO ITN, who has received funding from the European Union’s Horizon 2020 research and innovation programme under the Marie Sklodowska-Curie grant agreement No. 764908. Her research focuses on processes of agrarian transformation and water governance in Maharashtra from a feminist perspective.. Her research interests are in agricultural relations, colonialism and ecological ethics, specifically their entangled histories in Tamil Nadu, India.