Rural areas in Central and Eastern Europe have often been described as a bastion of right-wing populism as populist vote shares are considerably higher in the countryside. Is this the case, and if so, how did the right-wing parties win over the post-socialist village?

Right-wing populism has shaken and stirred European politics in an unprecedented manner. Populist leaders and parties come to power by claiming to protect the interests of “ordinary people” and return “the national glory” that was presumably lost due to the activities of “others” – migrants, minorities, cosmopolitan elites, supranational organisations like the EU, and so on. This political movement has a strong tendency toward authoritarianism and favours nationalist interests over cosmopolitanism, protectionism over cooperation across borders, xenophobia over multiculturalism, and traditional over progressive values.

The biggest advances have been made in Central and Eastern Europe, where right-wing populist (in some cases authoritarian) parties and leaders have been taking over political power since the early 2000s. They are now attacking core liberal institutions such as the independent judiciary and free press, re-defining national identities in terms of ethnicity and religion, and claiming to protect their homelands from an “invasion” of Muslim migrants and “destructive” politics of the European Union.

The village Jamel (municipality of Gägelow). It is mostly populated by ethnic settlers and members or voters of the National Democratic Party of Germany. Photo BBC.com

Central and Eastern European populists found great support in the countryside, as recent elections and referenda have made evident. Viktor Orbán’s pledge to preserve Hungary’s sovereignty and uphold Christian values, against the inflow of Muslim migrants, is wholeheartedly received in ethnically homogeneous rural communities. Poland’s “Law and Justice Party” has won more than 70 percent of farmers’ votes by promising cash handouts for children, pigs and cows. Certainly, not all rural residents support populists. In different countries, different initiatives have been undertaken to counter the right-wing nationalist sentiments and movements in the countryside (read about Eco Ruralis in Romania, for example). Yet, the political divide between metropolitan and rural populations remain visible: urbanites tend to support progressive leftist ideas, while provincial and rural residents lean towards regressive, conservative, authoritarian attitudes.

The current wave of right-wing populism is not new to this region. During the interwar period (1919-1938), radical political parties representing peasant interests held power in nearly every country in Central and Eastern Europe. This movement was called the “Green Rising” (not to be confused with today’s progressive green parties and movements). In fact, the interwar “Green Rising” was not “green”, but rather “brown” or “red” as it was characterised by ideological and political struggles between fascism, communism and capitalism. The “Green Rising” began with the rapid dismantling of feudalism in Eastern Europe after World War I, when about 100 million peasants acquired the right to vote. They were the backbone of the Peasant parties which formed governments in Bulgaria and Poland in 1920, in Romania in 1928, and which held power in coalition governments in Czechoslovakia and Yugoslavia. Although there are more differences than similarities between now and then, history seems to be repeating itself, albeit in a different manner with new actors involved.

Scholars used to explain the contemporary rise of right-wing populism in post-socialist Europe as a backlash against the liberal politics of post-communist transition rooted in unfulfilled promises of transformation and the humiliations associated with the uphill struggle to become an “inferior copy” of the Western (superior) model. Although Central and Eastern Europe has experienced virtually uninterrupted economic growth and soaring living standards over the past 30 years, the systemic transformation and Eurointegration have brought many challenges to the post-socialist region and its people.

The so-called “catching up with the West” and the “return to normality” of Central and Eastern Europe have been accompanied by the deep transition recession of the early 1990s, systemic corruption, a sharp increase in income and wealth inequalities, collective land and resource grabbing, and policies of extractivism that have severely affected rural areas. Mainstream politicians used to pay little attention to rural problems, while further “EUropesation” and neoliberalisation were considered as the only way forward. The EU’s Common Agricultural Policy, which is designed based on the western agricultural model, is unable to address the specificities of post-socialist agrarian structures. As a result, the CAP has deepened inequities between small and large farms. Many small family farms went bankrupt and ceased to exist. According to the EU Commission for Agriculture and Rural Development, during 2006-2017, more than 900 000 agricultural jobs have disappeared in Romania, 600 000 – in Poland, 300 000 – in Bulgaria (see figure below). Most of them are at small farms. Many villagers felt abandoned and forgotten, and feelings of despair and pessimism spread throughout the countryside.

Right-wing populists ardently exploit rural discontent for their own political ends. They make increasing use of themes around agriculture, rural development and land. In our recent collaborative research project, we examined the causes, consequences and cures of right-wing populism in rural Europe (see the Sociologia Ruralis journal special issue edited by Natalia Mamonova and Jaume Franquesa). We argued, to understand the varieties of right-wing populism in Europe, we need to understand the specificities of its countryside – its historical legacies, understandings of the peasantry and rurality, and specific class and political configurations (you can read our framing paper here).

Right-wing politicians typically refer to rural dwellers as “the true protectors of their nation’s culture and heritage” and promise to rescue rural communities from the destructive forces of “market democracy” or “globalized neoliberal capitalism.” However, these promises are often empty promises. In his study of populist demagoguery in Hungary, Balsa Lubarda has revelled that the idea of “homeland farming” plays an important role in Viktor Orbán’s political success. In his 2010 election campaign, Orbán appealed to rural voters and promised to support the Hungarian countryside and small-scale farming. However, this support has never materialised. Instead, Orbán’s party Fidesz became associated with representing the interests of big companies (such as Monsanto), oligarchs and land grabbing.

Certainly, Central and Eastern European populists do not have a monopoly on the rural theme; it is also used by right-wing politicians in other countries, for example, by Marine le Pen (see ruralisation of The National Rally) or Swedish Democrats. However, the rural theme is used more intensively by populists in post-socialist Europe. There are several reasons for this. First, there are significantly more people living in rural areas of Eastern and Central Europe, than in its Western counterparts. On average, about one third of Central and Eastern Europeans lives in the countryside, and even more people lead a lifestyle similar to rural.  Second, the majority of post-socialist villagers are engaged in farming. Lithuania, Latvia, Romania, and Poland have about 20 percent of their labour force employed in agriculture, while most of the rural population is engaged in subsistent (peasant-like) food production on household plots. This makes villagers very susceptible to any speculation about agriculture and farming. Third, urbanisation in post-socialist Europe occurred more recently and rapidly, and, therefore, peasant values and traditions remain deeply rooted in national identity and collective memory even in urban areas. Populists ardently employ peasant morality, imagery, and ideology in their political appeals and mobilisation. Slovakian anthropologist Juraj Buzalka called this phenomenon “post-peasant populism”.

Besides using the rural imaginary in their campaigns, right-wing populists frequently employ the theme of the “dying villages”, which is a critical topic in the post-socialist countryside. Since the collapse of communism, many rural settlements are being abandoned by the capital, the state, and people. Rural emptiness is the result of post-socialist restructuring and neoliberal capitalist development in the countryside. Former collective farm enterprises – which were the socio-economic backbones of rural regions – were dissolved, and their lands distributed to the rural population for private farming. Yet, family farms emerged on a limited scale; most of the land became accumulated by industrial agribusiness, often with oligarchic or international capital involved. Only a few countries – such as Romania and Poland – are still characterised by a large number of small farms (but land concentration also takes place there). Young and active people have migrated from stagnant rural areas, infrastructure has crumbled, and the popular narrative about “dying villages” has become ingrained in the social imaginary of the post-socialist countryside.

The rural emptiness argument has been used for years by left-wing groups in their criticism of the EU’s agricultural and rural development policies (see the EEB report “Is the CAP fit for purpose?”). However, it was right-wing populists who made this argument exceptionally loud and political. Thus, “Alternative für Deutschland” often refers to the theme of “dying villages” in eastern Germany and promises “not to let rural areas bleed to death”. Moreover, underpopulated villages of eastern Germany attract “ethnic settlers”, who buy abandoned houses, set up organic farms, and practice Blood and Soil-inspired ruralism. These organic “brown farmers” have become highly successful agricultural entrepreneurs who, in addition to selling “healthy” “local” milk and vegetables, are promoting their far-right political views. Recently, several organic associations and cooperatives in eastern Germany have raised concerns about the presence of neo-Nazi farmers and are urging consumers to boycott their products.

In Ukraine, regressive nationalist mobilisation has recently skyrocketed after Volodymyr Zelensky’s government announced the abolition of the moratorium on land sales. Until now, Ukrainian farmland was formally owned by the rural population, and land transactions were prohibited. The Association Agreement with the EU implied – among other measures – the liberalisation of the land market. The land reform has triggered various fears in the Ukrainian society. People were afraid that the open land market would lead to massive land purchases by foreigners, excessive concentration of land, and destruction of the Ukrainian villages. The societal resentment against the abolition of the moratorium gave a wide base of support for farmers’ protests, organised by farmers’ unions in the autumn of 2019. Farmers condemned the land market opening conditions and prophesied massive land grabs. Ukrainian populist and nationalist parties joined the protests and tried to exploit the discontent for electoral gains. They used highly emotional slogans such as “don’t sell the fatherhood” or “halt the theft of land!”. Some even brought a coﬃn with a pig corpse and funeral wreath ﬂowers in front of the Parliament to symbolise the approaching collapse of Ukrainian agriculture. However, while criticising the land reform, Ukrainian populists do not clearly formulate their own agrarian programmes or offer solutions to the land question. 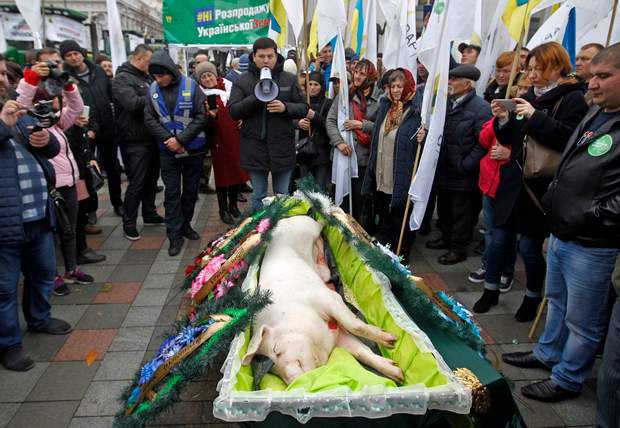 Framer’s protests in Ukraine in 2019 against the abolition of the moratorium on land sales. Photo by Pavlo Gonchar. SOPA Images_LightRocket.

The rise of nationalist regressive sentiments and political movements in post-socialist rural Europe is an extremely dangerous trend. However, this should not be blamed only on individual political leaders or parties that came to power by means of media manipulation, propaganda and disinformation. If propaganda did not resonate with the feelings and experiences of ordinary villagers, it would be ineffective. Thus, we need to assess critically the existing inequalities, socio-economic deprivation and perceived injustice in post-socialist rural areas and find solutions to these problems.

Natalia Mamonova is a researcher at the Stockholm Centre for Eastern European Studies (SCEEUS) and the principal coordinator of the European team of the Emancipatory Rural Politics Initiative (ERPI Europe). Her research interests focus on contemporary rural politics in post-socialist Europe.