As part of the current global trend towards the “museification” of water and processes of re-municipalization, the politics of memory of hydraulic infrastructures and water resources has become a key battleground between corporations and transformative socio-political movements. These struggles in cities such as Barcelona show the relevance of complementing the spatial turn in political ecology and urban geography with a temporal turn.

There is currently a global trend towards the memorialization and museification of hydraulic resources and infrastructure, reflected for instance in the recent creation of a Global Network of Water Museums. Yet such initiatives are often based on a sanitized approach to memory, which denies the ubiquitous socio-political conflicts over water resources. Battles over water have intensified in recent years in cities worldwide, bringing to the forefront questions about who is to administer water resources, how, and with what legitimacy? Transformative democratic movements have struggled to take gain control over water after decades of private or predominantly private management. In most cases, these attempts have been met with fierce resistance from multinational corporations turned into political and cultural-communicative agents fully engaged in the constructing narratives of public legitimacy. In these conflicts over the future of water governance, the past of water infrastructures and the very significance of water has become a key battleground, as actors on both sides lay claim to divergent water narratives and imaginaries.

In a recent article “The Political ecology of water memory: the case of Barcelona (2015-2021), we argue that political ecologists and geographers concerned with processes of remunicipalisation have largely been ignoring the politics of ‘hydraulic memory’ in the struggles over public legitimacy and imagination. Our article identified an embryonic subfield of political ecology, which would strive to understand how the entanglement of space and memory constitutes a discursive framework in the struggles for political legitimacy and the control of the environment. This ‘temporal turn’ in political ecology could usefully draw on memory studies to analyse the growing memorialization of water discourses, sites, as well as their political significance. Memory studies look at the co-dependence between the spatial and temporal dimension of societal practices by focusing on the lieux de mémoire (“sites of memory”, as Pierre Nora called them), and the relevance of memorialization for the construction of communal spaces.

Our case study is Barcelona, where the multinational Agbar, managing in different formulas the water service for more than 150 years, has been challenged by the city’s municipal government of Barcelona en Comú, a citizen platform led by the mayor-activist Ada Colau since 2015. Among others, the municipal government and allied social movements such as Water is Life have defended that the concession of the water services to Agbar was both illegal and democratically illegitimate, and proposed inter alia a referendum on how the water should be managed in the city. Eventually, the process of remunicipalization suffered a setback, and the referendum did not take place. The Supreme Court sanctioned the concession to Agbar and the proposal for the referendum was defeated in the municipal agora due to the divisions amongst left-wing forces. However, the “game” has changed: the government of Colau has managed to politicise water and put it on the public agenda as a core debate about democracy and the future of the city. In our research, we advocate combining memory studies and political ecology to look at the clash of memory narratives between the public and private contenders, and how this has contributed to a shift in public discourse and imagination. 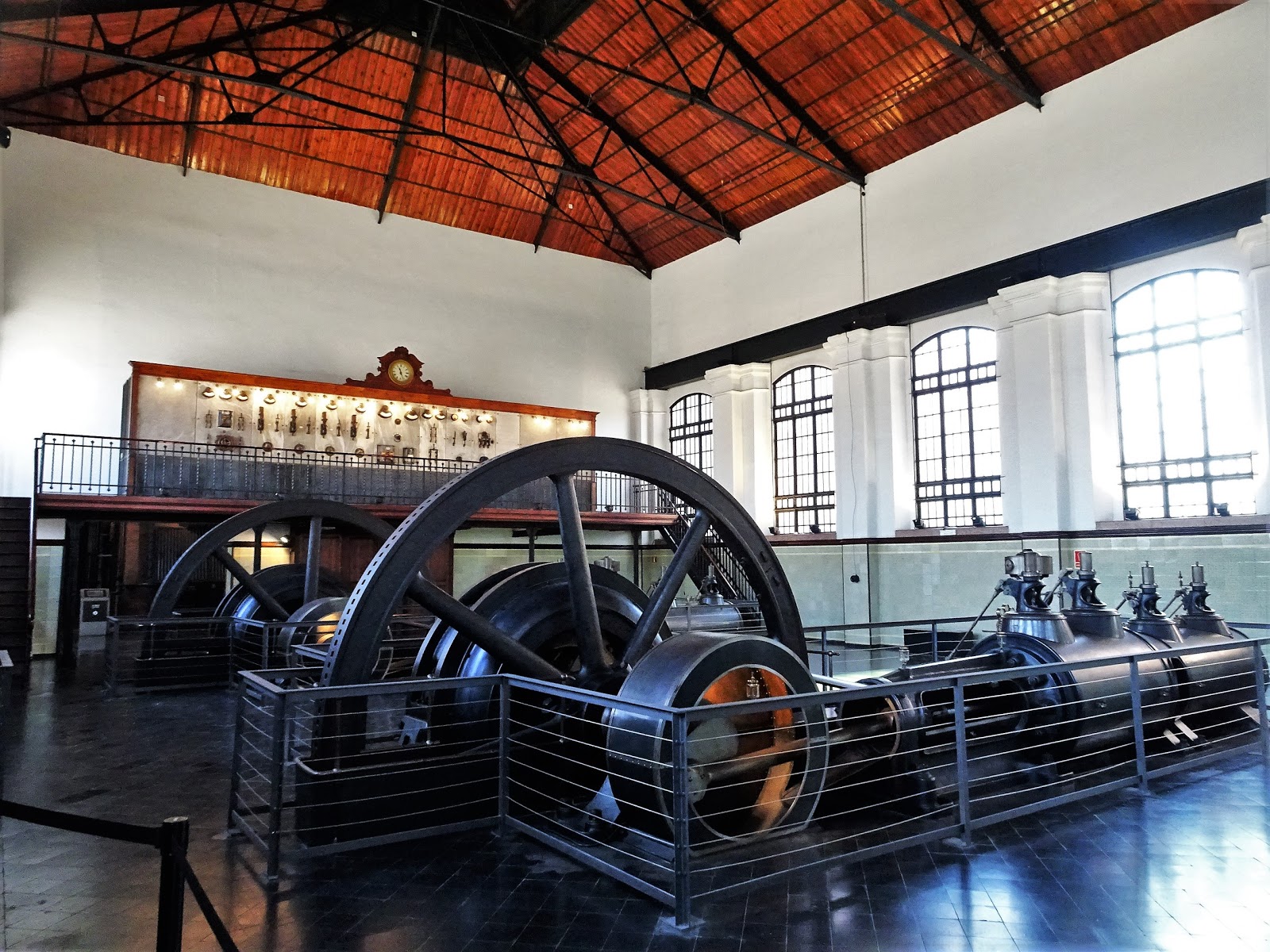 Inspired by the writings of Mikhail Bakhtin, we distinguish between a monoglossic and a heteroglossic politics of memory in constituting these divergent narratives: the former articulates and institutionalizes the space-time of memory through one unitary and totalizing voice or language (one “glossa”); in contrast, the heteroglossic politics of memory brings together a plurality of voices and discourses. The modern process of memorialization has been predominantly pursued in the context of nation-state building. Driven by a top-down interest in building a state-community bound in space-time, such politics of memory have been overwhelmingly monoglossic. As nation-states set up and institutionalized sites of memory, they tended to homogenize the plurality of local memories into one grand narrative of reconciliation between elite and people, capitalism and democracy, corporations and citizens, past, present and future, often erasing divergent trends, moral failures, ambivalences, and singular histories. Such a politics involved the creation of memory laws, archives, textbooks, museums, memorials, artwork, and civic and political rituals. Retrieving the historical heteroglossia can be part of an alternative political agenda (consider feminist and postcolonial struggles), which aims to counter the erasures of the hegemonic narrative and excavate marginalized narratives, ambivalent voices and forgotten sites of memory (see also Mihaela Mihai’s recent work).

In Barcelona, the official history of water has been linked to Agbar’s long-term monopoly over water management. The company has traditionally collaborated with public authorities and summoned experts to organize cultural undertakings dedicated to the hydraulic patrimony of the city. With the coming into power of the municipalist forces, the traditional collaboration between Agbar and the authorities broke down, and the company deployed a battery of communicational devices to defend itself. A monoglossic history of the water infrastructure became a key weapon.

As Agbar presented itself as builder of the modern city, it also co-opted the language of the ‘enemy’, littering its politics of memory with references to “people” and “participation”, and appealing to a communicative style based on affective proximity to commoners. This operation runs in the opposite direction to what Maria Kaika and Eric Swyngedouw (p. 120) consider as emblematic for the construction of modernity: “…urban networks in the contemporary city are largely hidden, opaque, invisible, disappearing underground, locked into pipes, conduits, tubes, passages and electronic waves.” Instead, Agbar displayed and resignified the underground waterworks to claim its role in the construction of modern-democratic Barcelona.

Images of waterworks being built in front La Pedrera (Source: Official Twitter of Aigües de Barcelona). The tweet reads: “The Casa Pedrera, Casa Mila, has witnessed thousands of people passing by. The same way, it witnessed how our colleagues have been working to improve the water service. 150 taking water to homes and businesses in Barcelona and its metropolitan area”.

In response to this campaign, Barcelona en Comú advanced its own memory narrative, aiming to bring to light alterative time-spaces obscured or ignored by the ‘official history’: they talked about decentralised water management sources – such as wells, streams, rainwater harvesting – and the extinct public water company of the city. By going back to the local and heteroglossic experiences of water management, the municipalist government projected a radically different image of progress as answer to the current socio-natural challenges: re-signifying water as life and common good, advocating for ‘people’s’ direct involvement in caring for and managing it. 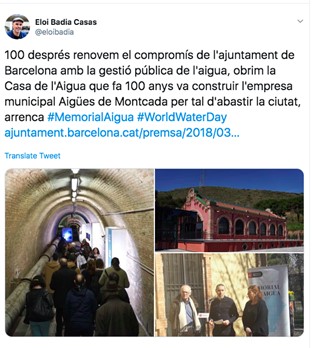 Figure 2. Images of the 100-year celebration of the extinct public water company Aigües de Montcada (Source: Eloi Badia’s official Twitter, 22nd March 2018). The tweet reads: “100 years later we renew the commitment of the city council of Barcelona with the public management of the water, we open the Casa de l’Aigua built 100 years ago by the municipal company Aigües de Montcada to supply the city, it’s the start of # MemorialAigua #WorldWaterDay

Pierre Nora argues that starting with the 1990s we have entered in the “age of commemoration” whereby society’s naturally integrated commemoration of history via oral stories and legends has disappeared in favor of artificially engineered narratives of collective memory (p. 609-610). Yet the clash between BeC and Agbar concerning the time-space of the hydraulic memory is not simply about two artificially engineered narratives: it is, we argue, about the fundamental political question of the type of society and environment in which we aspire to live in. As Scott Fitzgerald expresses it in The Great Gatsby, navigating the currents of the future brings us inevitably and “ceaselessly into the past”.

Lucia Alexandra Popartan is a political ecologist with a background in Political Science and a PhD in Water Science and Technology. She is a postdoctoral research at LEQUIA, an environmental science group from the Universitat de Girona, where she co-coordinates the Socio-natural Systems research line. Her research interests include water remunicipalisation, urban political ecology, populism, social movements, edible cities. She is currently co-editing the book Urban Natures: Making Visible, (Re)Connecting and (Re)Politicising (Berghahn Books, forthcoming).

Top/Profile Picture: Banner against the privatization of water in the demonstration convened by the Platform in Defense of the Ebro on June 5, 2016 in Barcelona / Aigua és Vida. Source: elcritic.cat