By Marcela Olivera and Stefano Archidiacono

Twenty-one years after the Water War in Cochabamba (Bolivia), we reflect on “autogestión” of water as a practical and cultural dimension of the commons. A new piece for the series “Reimagining, remembering, and reclaiming water: From extractivism to commoning”.

Although Bolivia was born as a centralist and unitarian state, there has always been a tradition of autonomy in water management (as well as in the management of other commons) called in Spanish autogestión. Autogestión is an everyday practice for many people and is ingrained in many Bolivian territories at the margin of the state (meaning separate from public institutions regulated by the state). These practices have endured from time immemorial despite their limitations and challenges – as we will elaborate in this article. Autogestión could be roughly translated into English as autonomy, self-regulation and self-management. Yet much is lost in translation. We hence want to keep the word autogestión in this article and explore, through three different stories, some of the practices and events that define the uniqueness and relevance of this concept as a way to organize around water.

We live in Cochabamba, a city in central Bolivia, known for the famous Water War that took place in 2000. Beyond the remunicipalisation of the local water company, SEMAPA, and the cancelling of the privatization contract, the Water War of Cochabamba triggered and still triggers multiple and sometimes contradictory reflections and interpretations. Meanings, impacts and significance that arose from the Water War are multifaceted and changing in time. If you talk to a protester from a popular neighborhood in Cochabamba, a scholar in a university in the north or an analyst of the World Bank, you can get very different perspectives on what happened and why.

The international water movement, those people and organizations that oppose neoliberal policies on water management and governance (that we consider ourselves proudly part of), framed the Water War as a protest against water privatization and for the defense of water as a fundamental human right. But was it really so? Were these the reasons people mobilized for? Reflecting with some of the leaders and participants twenty-one years after the revolt, we realized that the recognition of water as a human right and even the opposition to the private ownership of water and related services were not the claims of the people, nor were they the reasons that led them to take the streets and to fight against the military. Oscar Olivera, one of the leaders of the mobilization, during an event for the 21st anniversary of the struggle, recalls that “in 2000, we not only fought against water privatization. Privatization also means removing our history and memory from our hearts. The history of our people is of resistance and action.” In this statement and in the history of autogestión, we believe that resides an important aspect of the Water War. As a matter of fact, many protesters opposed first and foremost the expropriation of their ability and legitimacy to manage water according to their traditional and customary practices. Hundreds of community-based water organizations joined the protest even from areas that were not being affected by the privatization contract. Probably the international experts that designed the privatization scheme disqualified these forms and practices of water management as inefficient and informal. But the reaction was beyond their imagination. The people fought to defend their values and practices around water management and their capacity and legitimacy to decide how, when and where water should be flowing. Again, Oscar Olivera claims: “The defense of water and the territory goes through the defense of the dignity of the people, of our organizational forms, our worldviews and respect for our way of living and understanding life and the universe”.

Yet Cochabamba is not the only place where autogestión of water is practiced at the margin of the state. In many territories of Latin America (and the Global South), people relate to water in a very direct and unmediated fashion embodying different forms and practices of autogestión intimately related to their history, culture, tradition and socio-natural circumstances. We here present three stories related to the lived concept of autogestión of water to better understand what it means in practice.

Autogestión as thousands of community-based organizations

The first story relates to people’s access to water and related services in many rural and suburban territories of Latin America. A kaleidoscope of thousands of community-based organizations of very different types, shapes and dimensions grant material access to water to millions of women and men in the region. According to data collected by the Platform of Public-Community Partnerships of the Americas (PAPC), 50,000 organizations provide water to more than 30 million people. The Confederación Latinoamericana de Organizaciones Comunitarias de Servicios de Agua y Saneamiento (CLOCSAS) estimates that 145,000 community-based organizations provide water and sanitation services to approximately 70 million people. The real number is possibly significantly much higher, but there is not an official and ultimate figure because the vast majority of these organizations are informal and do not appear in the official records. They are invisible, yet they guarantee access to water and life to a huge number of communities. It is often mentioned that these community-based organizations emerged and continue to exist due to the inability of the State to provide access to water and related services. But, as the National Network of Community Aqueducts (Red Nacional de Acueductos Comunitarios) of Colombia claims, these spaces of autogestión of water exist because of the presence of organized communities with their capacities and histories to administer social ecoexistence, natural resources and life within a geographical, cultural and political territory. This brings us to our second story. 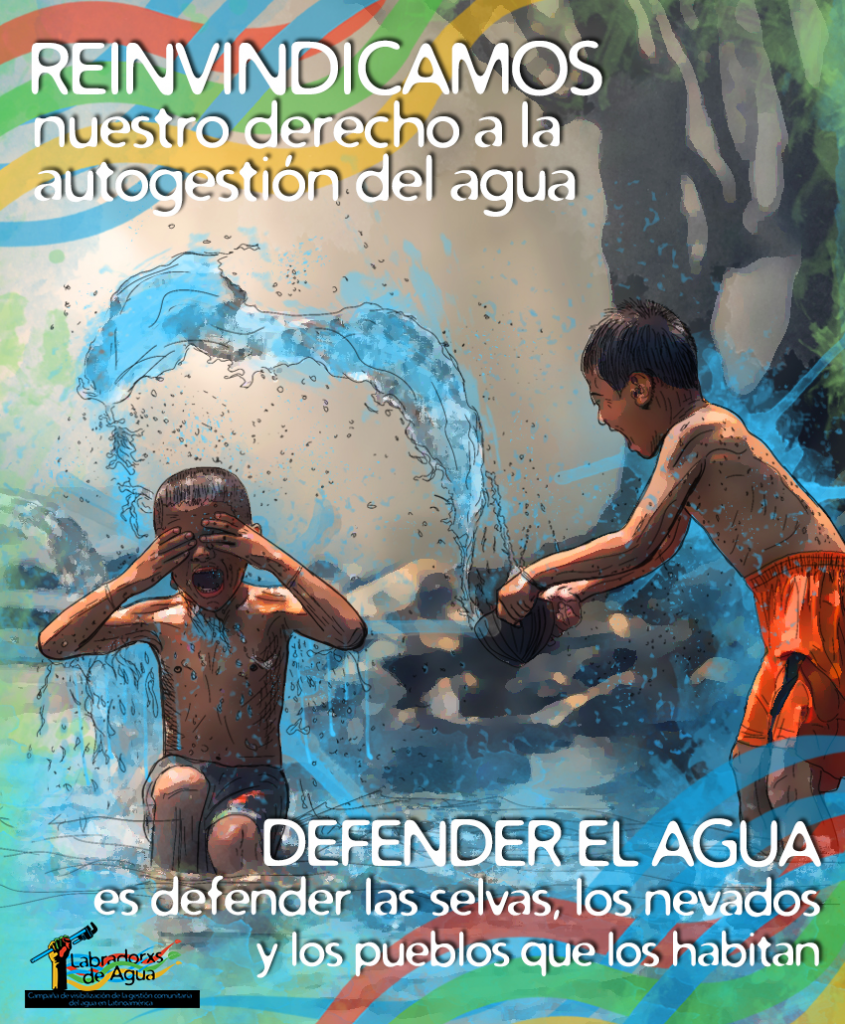 The right to autogestión comunitaria

This story tells how organized communities are developing and proposing legal frameworks that recognize and protect their practices and values. In 2016, in Colombia, the organized communities that make up the National Network of Community Aqueducts, started a process to share and discuss the proposal of the Ley Propia  (in a very rough translation: Our Own Law). The proposal of legislation talks about 3 dimensions of the Right to Water: the individual right to water; the collective right to water; and the right to autogestión of water. This last point is based on the general comment no.15 of the International Covenant on Economic, Social and Cultural Rights which affirms that peoples should have the right to procure and relate to water according to their customs and traditions. The Ley Propia makes a differentiation between autonomous community water systems, public companies and private ones, breaking up with the old binary identifying only two ways –public or private– to manage water. It also acknowledges solidarity as a central legal value. The organized communities in Colombia are also stressing the importance of the process through which the Ley Propia  was made. Javier Marquez, a Colombian organizer and environmentalist who accompanied this process beautifully explains how the development of this Ley Propia is, in practice, a process of autogestión:

“Our Ley Propia is a legislative initiative built by the National Network of Community Aqueducts. Its local networks and regional processes, during meetings, assemblies and workshops, shared their feelings and their desire to be recognized and valued in their ancestral historical work of managing and defending water in their territories. It is a collective construction in which we started identifying the failure to recognize our practices in Law 142 of 1994 on public services. From there, we decided that we needed our own law, which includes our ways of doing things, our political commitment to water as a common good and a human right, and our proposals on how to relate to public institutions”.

The third story illustrates the social construction of water technologies which connect with autogestión. We refer to the decentralized Brazilian program of rainwater harvesting titled “One Million Cisterns”, developed by a network of civil society organizations named Articulation of Semi-Arid (ASA), that has been propagated in other countries seeking to improve water security in semi-arid regions of Latin America. This technology consists of harvesting rainwater from rooftops into cement plated tanks and has two main characteristics. First, it is designed to save construction materials and time for its edification and second, it actively engages the recipients of the infrastructure. It is labeled “social technology” because, although it incorporates innovative technical and engineering elements in its design, it is largely supported by its social and organizational dimensions. It can be argued that these rainwater harvesting tanks are “filled” with politics: values related to autogestión of water are embedded in the infrastructure. According to their promoters, these tanks aim at encouraging community organization and reinforcing the social fabric; in other words, strengthening the capacity of local communities to work together to address their problems. According to Valquiria Lima, national coordinator of ASA, the centerpiece for this technology is the engagement and participation of the community: “the difference is that the families co-produce, through their participation, the technology of the rainwater harvesting tanks; they learn how to manage it, and the final results are the outcome of their work and effort”. These pieces of water infrastructure proved to have the potential to open up a space where communal organizational practices can be recognized and incorporated. These are places where people can get together, discuss and deliberate creating possibilities for alternative and autonomous circuits of water collection and distribution.

Water cistern built in the south of Cochabamba. Photo: https://www.fundacionabril.org/.

By acknowledging and recognizing the importance and relevance of autogestión of water in many territories of Latin America, we do not aim to romanticize this mode of water management and governance. As a matter of fact, these spaces of autogestión face several problems and challenges that are not only external (such as the constant menace that comes from centralized States, privatization or climate change), but also internal. Many community-based water systems lack monitoring mechanisms and water-purification technology required to guarantee a safe service. Few communal systems provide sanitation sewerage services, which are most difficult and expensive to build and manage. Inside the communities there are conflicts related to the use, allocation and distribution of water and the financial management of tariffs and funds. The role and work of women is in some cases undervalued and unrecognized, reproducing general gender stereotypes and inequalities.

On the other hand, what we would like to point out is that autogestión is not a marginal or residual practice, but it is a central one embedded in the culture, history and socio-natural relations of the people that inhabit our neighborhoods, villages and countryside. It is a practice that constitutes and defines identities and contributes to regulate social coexistence, meaning the capacity of people to live together (and together with the nature that surrounds them) in a geographical space sharing duties and responsibilities and taking autonomous decisions. Therefore, dismissing, dispossessing or expropriating these autogestión practices is equivalent to dismissing, dispossessing or expropriating ways of living, of being and doing politics.

Marcela Olivera is a water commons organizer based in Cochabamba, Bolivia. Since 2004 she has been helping to develop and consolidate an inter-American water justice network named REDVIDA. She is also a member of the Platform for Community Partnerships of the Americas (PAPC), an organization that promotes exchange among water utilities based on solidarity and horizontal cooperation. Since 2019, she has been working at the Blue Planet Project.

Stefano Archidiacono is an Italian activist, researcher and development practitioner. He has worked since 2007 in Cochabamba, Bolivia, with the NGO CeVI strengthening community-based water initiatives and management practices, and developing water technologies in rural and suburban areas. He is active in the Platform for Community Partnership of the Americas (PAPC) and the European Water Movement as an organizer and researcher.