Limity jsme my! (We are the limits!) The first International Climate Camp in Czech Republic, Horní Jiřetín

Climate politics in the long run 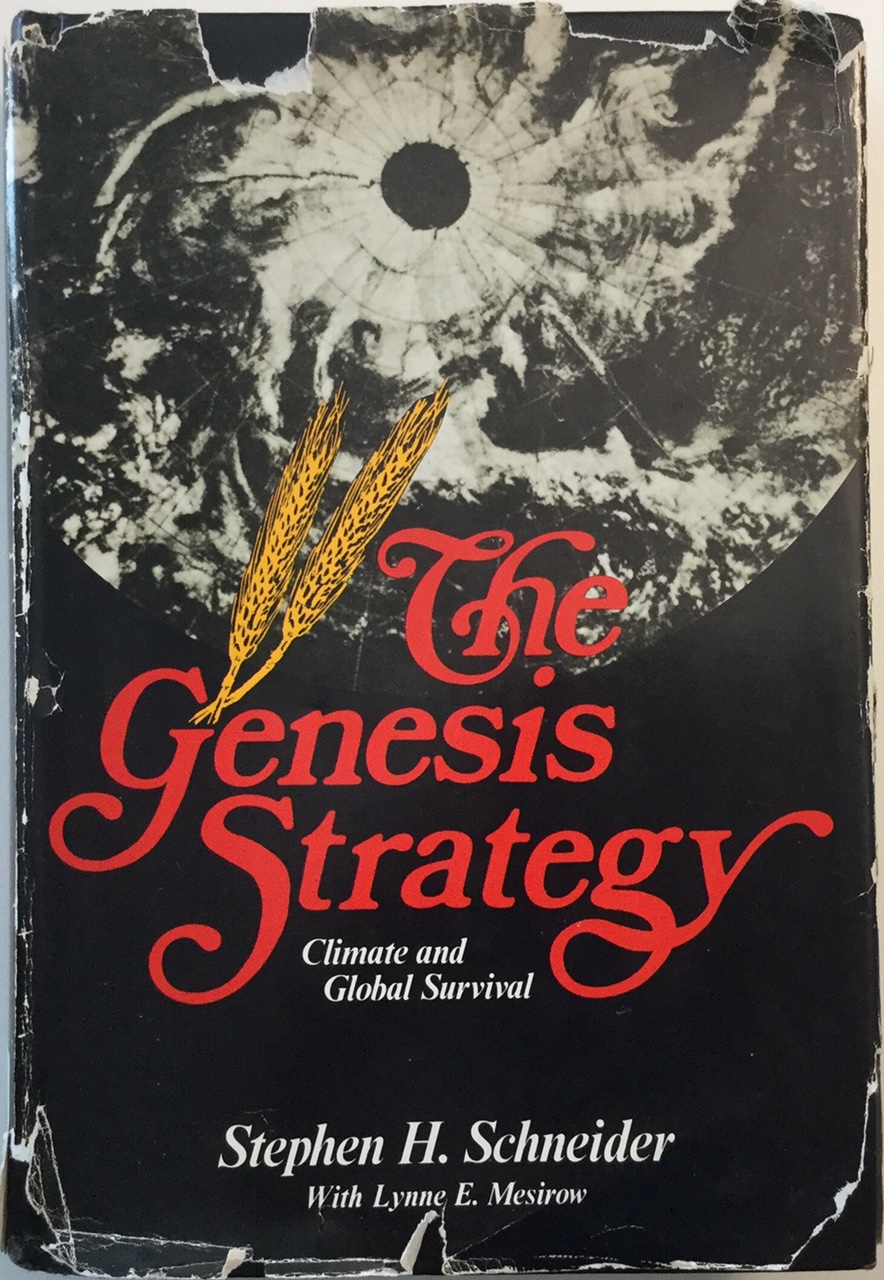 According to philosopher of science Bruno Latour, the rise of climate scepticism in public debates reflects the lack of political engagement from climate scientists. He argues that, having restrained themselves to a discourse of “facts” and “science”, climatologists have been toothless in the face of a growing opposition to climate science, which wittingly seeds doubts about the quality of expert knowledge.

However, climate science is no stranger to politicization. As noted by historians of the discipline, many early scientific contributions to the climate question were indeed quite political.

A prime example is offered by the respected and influential climatologist Stephen Schneider (1945-2010), the founder and first managing editor of the journal Climatic Change (and later a lead contributor to IPCC reports). In many ways, Schneider is a forerunner to the “unfree radicals” of contemporary geosciences lauded by Castree.

Forty years ago, in 1976, Schneider, then a young scientist at the US National Center for Atmospheric Research, published a ground-breaking book on climate change, The Genesis Strategy: Climate and Global Survival. He quickly became a recognised “spokesperson” for climate change.

The Genesis Strategy was a highly politicized scientific book. Schneider used his wide-ranging scientific and communication skills to summarize cutting-edge research on climate and atmospheric sciences, agronomy, energy and water, and translate them into a coherent and accessible narrative. He used his scientific credentials to offer analysis of the “human predicament” and possible solutions to it.

The text received good press coverage and was featured on prime-time television. The New York Times called it “a useful and important book”. Although Schneider’s expertise lay in the atmospheric sciences, his style of writing and the general tone of the volume were similar to that of other contemporary North-American scientists turned public intellectuals, such as Paul Ehrlich, Carl Sagan or Lester Brown.

Like his colleagues, Schneider offered a gloomy neo-Malthusian picture of the world, made of decreasing food production and reserves, dwindling water security, overpopulation in the South, mass migrations, environmental degradation, global terrorism and even the “collapse of civilizations”. The book was written in the language of the “crisis of Man”, the “world problématique” and the “human predicament”.

Indeed, these were testing times for United States, its hegemony in global politics (especially after the Vietnam defeat), and for global capitalism overall. A vast literature on upcoming catastrophe, upheavals, ecological collapse and unpredictable transformations emerged in those times. Schneider’s book differs mainly by its focus on climatic changes.

Schneider insisted that human beings had entered an ontologically uncertain world. The human capacity to predict future developments, especially in the natural world, he argued, was rapidly disappearing. And the growing variability of the climate was a major contributor to this increased uncertainty.

Interestingly, this very focus on risks, uncertainties, and unpredictability would later become strongly associated with the then nascent neoliberal political economic order—for which, however, Schneider seemed to have had little sympathy.

Let us remember that, as the Genesis Strategy was published, the scientific consensus on “global warming” had yet to emerge. Debates at the time revolved around climate changes and variations. Furthermore, the anthropogenic influences on those changes were not firmly established. The first culprit Schneider identifies in his book is the heat released in the atmosphere by energy production and consumption, though he later mentions the release of CO2 in the atmosphere caused by fossil fuels.

Because the anthropogenic causes of climatic changes were then not clearly established, Schneider had very little to say about reducing, or mitigating, human impacts on the climate. He merely discussed these issues in the context of deliberate “climate control”—what we would today call geoengineering.

Rather, the whole point of the book was that humans had better be prepared for an increasingly unknowable and uncertain world: “… there is a personal message here directed to everyone and I have tried to weave it into these pages: Most of the crucial issues of human survival that will confront humanity over the next few decades will call for ethical and political value judgements—decisions on how to act in the face of uncertainties. ” (p. xiv)

The advent of this ontologically uncertain world calls for a shift in thinking and in governance. Schneider insists on human societies—chiefly, the United States—choosing to act before certainty can be reached.

Long before the attacks against the IPCC style of doing science, Schneider argued: “My own feeling is that ‘consensus’ is an inadequate way to do science” (p. 10) and that “for the CO2 question, I feel that we cannot afford to risk waiting too much longer for scientific certainty before acting—and that is primarily a personal view of how society should act in the face of this uncertainty.” (p. 190)

This is quite a remarkable statement considering that a major criticism of IPCC-style policy advice is precisely its reliance upon a so-called “linear” conception of the science-policy process. In such a conception, a settled, clear, and consensual statement from “science” should straightforwardly lead to rational political decisions, such as a global agreement to collectively reduce greenhouse gas emissions.

Of course, the heated scientific debates in which Schneider engaged on the direction and causes of climatic changes were a far cry from the later climate “denial”, “scepticism”, and “wars”. He would become himself embroiled in those public debates and make ample use of the martial metaphors that have come to dominate climatologists’ engagements with adversarial publics, at least in the United States.

The tone of Schneider’s volume, however, mostly fits a technocratic understanding of politics, one that accommodates risks and fosters resilience. As in its eponymous episode of the Bible, the Genesis strategy recommends the creation of food reserves to sustain heavy production losses due to climatic and other fluctuations.

His is a “a call for prudence, negotiations, and margins of safety in all our future planning so that we are adequately prepared for such probable misfortunes as extended periods of bad weather and their harmful effects on crops” (p. 39). The more general principle however, one that should apply to “an entire spectrum of technological and survival controversies”, is “that future survival should depend on systems sufficiently flexible and elastic to sustain moderate failures in one or several parts without causing catastrophe.” (p. 39)

Schneider presenting the book on the Tonight Show with Johnny Carson in 1977. Source: simpleclimate.wordpress.com

This principle suggests to not just create food reserves, but to also conserve resources, mainly energy. The need for more “flexibility” points to creation of redundancies in systems fostering diversity rather than centralization. Such arguments feature prominently in more recent “resilience” thinking on climate change adaptation.

However, unlike neoliberal economists who started arguing also in the late 1970s that the market is the only institution that can deliver sufficient flexibility for climate change adaptation, Schneider offered a much more state-centred approach to implementing flexibility and suggested widespread economic planning.

Indeed, the book was derided—probably rightly so—for its naïve reform proposals. Schneider cast an unfavourable eye on the functioning of democracy, a political system supposedly out of synch with natural cycles due to “short-termism” arising out of elections and re-election cycles, and therefore he advocated eliminating re-election for politicians.

As a liberal, however, he did not suggest authoritarian solutions and actually castigated policy proposals of the likes of Garrett Hardin. He proposed different institutional reforms to better take into account the inputs of scientists in policy-making and to create an interest in the “long-term”.

His most spectacular idea was probably the creation of a “Fourth Branch of Government”. Besides the executive, the legislative and the judiciary, Schneider imagined the “Truth and Consequences Branch” (pp. 304-311), tasked with evaluating policy options and disseminating information to the wider public on the long-term consequences of various policy proposals.

He also pleaded for the introduction of other politico-scientific institutions such as an Institute of Imminent Disasters, an Institute of Resource Availability or an Institute of Policy Options. These would function as “planning bodies considering the environmental, political, economic, and social aspects of policy options from a global perspective” (p. 303). Schneider condoned this global planning vision, writing that “[n]othing short of a massive and immediate full-scale attack on the world predicament is likely to avert potential disasters; the requisite scale of efforts calls for a worldwide plan, a Global Survival Compromise.” (p. 312).

Yet, Schneider’s “global compromise” consistently puts the blame of looming catastrophes on overpopulation in Southern countries, their supposed inability to check population growth, and their harbouring of terrorism, rather than on runaway economic growth—as frequently done by radically minded scientists today. “President Macron’s latest utterances on over-population in Africa and on the link between climate change and terrorism, show that these narratives are still very much embedded in contemporary climate politics.”

In spite of these idiosyncrasies, Schneider’s Genesis Strategy offers a stunning preview of contemporary debates over climate policies. Indeed, the renewed catastrophic environmentalism grounded in “peak oil”, “planetary boundaries” and “collapse”, as well as the turn towards a politics and ethics of adaptation and resilience, feel surprisingly similar to the arguments put forward forty years ago in this book.

* Romain Felli is a lecturer in international relations and political science at the University of Lausanne (Switzerland), and he teaches at the Institute for Environmental Studies, University of Geneva. His work focuses on the cultural political economy of climate change, with a special interest on climate change adaptation and resilience. His latest book La grande adaptation. Climat, capitalisme et catastrophe (Paris, Le Seuil, 2016) will be published in english by Verso. e-mail: Romain.Felli@unil.ch. twitter: @fefelli