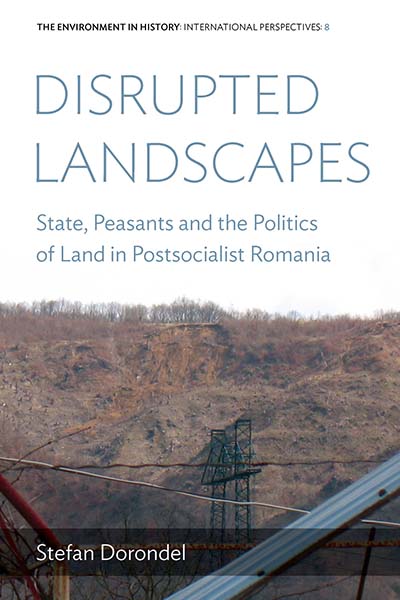 How many times have we repeated to each other that there is a need, an urgent need, for a political ecology of post-socialist countries? Thereby, we should warmly welcome Stefan Dorondel’s insightful ethnographic research on two villages in post-socialist Romania: Disrupted Landscapes: State, Peasants and the Politics of Land in Postsocialist Romania (Bergham Press, 2016).

First of all, let’s start with a disclaimer which I believe it is appropriate for the Entitle blog. In writing about this volume I do have a conflict of interest; I know the author well and we are friends. I have been following Stefan’s work since many years, always learning from him and enjoying the company of an acute colleague and a kind friend.

Academia is a strange planet, where we pretend to be blind, while we see very well and sometimes we believe we see everything while being rather blind. As a community of radical scholars, Entitle has been trying to experiment undisciplined ways of being into academia by disobeying to some of its rules. Therefore, here we have an undisciplined discussion of an wonderfully undisciplined volume within a scholarly/human relationship. Indeed, it is a mess, precisely as real life.

Disrupted landscapes is, first and foremost, a book about socioecological changes explored at the microlevel in two Romanian villages, Dragova and Dragomirești, in the transition between the socialist and the neoliberal regime. The author looks at the connections linking land uses, property rights, and state policies, especially in relation to forests and pastures.

As he writes, “as if Garrett Hardin himself had developed the land reform,” the post-socialist governments were eager to  restore private property on the basis of a “tragedy of the commons” agenda (9). Dorondel also points at the international interventions of the “econolobbyists” and experts who under the umbrella of expertise dictated the political agenda of transition (56).  However, as environmental historian Ted Steinberg once wrote, private property is not good for any kind of ecologies.

In the Romanian case, Dorondel explains that the privatization of forests pushed owners towards a more intensive exploitation rather than to a more sustainable use (90). But the story told in this volume is not just that of a gradual disruption (and actually the title of the book is probably the only thing which has not convinced me, though I would say that even the author himself does not seem to be extremely convinced by his title (xiii)). It is also a story of rewilding and conservationist policies, with the institution of national parks and the increasing numbers of wild animals, including bears and boars.

Actually, I have found Dorondel’s approach to wild animals – what in the environmental humanities would have called the more-than-human – one of the most intriguing and original of his contributions. Speaking of rewilding can foster a quite apolitical, if not even regressive, agenda. Dorondel, instead, is able to politicize the bear, the boar, or the snake, even if in this latter case perhaps more the imaginary animal rather than the actual reptile roaming around the houses of the most poor in the community.

The case of the Carpathian brown bear, instead, is the typical example of the conflict between conservationism and access to the forest; as Dorondel writes “Forest owners perceive the bear as a state instrument of forest control. Some of them interpreted this action as another mechanism used by the state to impede their access to the forest” (103).

The landscape analyzed in this volume is a blend of its very materiality, made of “forest, animals, waters, crops, pastures and land” (198), and its stories, made of land reforms, collectivization and reprivatization, tourist exploitation and ethnic tensions. What emerges, is that the landscape could not be understood without seeing in it the position that ethnic groups as the Rudari and Roma occupy in relation to the access to forest resources and to the wider society.

However, the reason why I believe that Disrupted Landscapes should be a must-read book for our community goes beyond the contents and the findings presented in the volume. Dorondel opens the volume with these lines: “This book is the outcome of my trespassing shamefully on several disciplines, some of them far removed from my scientific background” (xiii).

It might be just me, but I feel a fatal attraction for any kind of trespassing. Nowadays, this is the most radical of all possible disobediences. Forcing borders, ignoring frontiers, queering identities are revolutionary acts which, despite all the discourses about multidisciplinarity, are still extremely uncommon in academic practices. Dorondel proposes a forceful example of an undisciplined book, which blends history, geography, political ecology, and political economy upon a strong and rooted ethnographic basis. It is precisely this ethnographic basis what has allowed the author to deep-dive into the micropolitics of a postsocialist state, complementing the visions from above – seeing like a state – with the an embodied understanding of the abstract state into the particular gears of the bureaucratic machinery.

Marco Armiero is an environmental historian and political ecologist. His main topics of study have been environmental conflicts, uses of natural resources, politicization of nature and landscape, and the environmental effects of mass migrations. he is the director of the KTH Environmental Humanities Laboratory at the Royal Institute of Technology, Stockholm.
Share