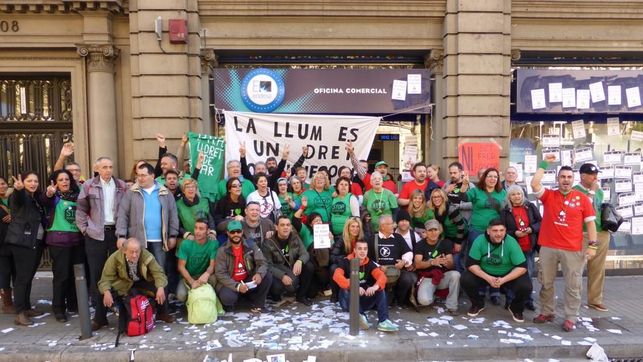 A diverse range of social and environmental collectives have come together in the past few years in Barcelona to form the Alliance Against Energy Poverty, successfully mobilising and fighting to stop energy and water cuts for families unable to pay their bills.*

Increasingly unequal distributional effects have become more visible as energy and water companies generate exorbitant profits due to deregulation, government subsidies and increasing prices. This model is based in the logic of the capitalist appropriation of nature, which results in energy poverty for the many and mammoth profits for a handful of companies and their CEOs and shareholders.

Spain is one country where energy poverty – understood here as limited or no access to basic services such as water, electricity and gas due to a person’s inability to pay – has increased dramatically with the crisis. 17% of the population have difficulties paying their electricity, gas or water bills.

Within the context of growing rates of energy poverty specifically in Catalonia, here I explore the energy struggles of the Aliança contra la pobresa energètica (the Alliance Against Energy Poverty – APE), focusing on their strategies, ways of organising and lessons learned. Their success is based on uniting historic and current street-based movements with technical entities to bridge social, ecological and political issues, creating social clamour and building solutions at grassroots as well as institutional levels.

A brief overview of energy inequalities in Catalonia is first outlined to contextualise the APE’s struggle. Based on an interview with two APE activists, attending a collective advising assembly in Barcelona, as well as the APE’s published materials and website, focus is then placed on APE and how they act on various fronts.

Why act? Energy inequalities in Spain, Catalonia and beyond

The Spanish electricity system is captured by a handful of powerful companies, which are impoverishing Spanish people, a situation that has become more extreme after eight years of crisis alongside increasing levels of unemployment and precariousness. The electricity oligopoly that operates in Spain – including Endesa (Enel), Gas Natural-Fenosa, Iberdrola, EON Espanya and EDP – registered €7.6 billion in profit during the first three trimesters of 2013, double that of other European electricity companies.

The University of Barcelona researcher Aurèlia Mañé Estrada highlights the depth of their power in stating that Iberdrola and Endesa control outright the legislative branch of the Ministry of Industry and Energy. Endesa alone, the main distributor of electricity in Catalonia, declared over €1.8 billion in profit in 2013. Such exorbitant profits are also fruit of a 60% increase in electricity prices since 2008.

Endesa and Iberdrola, furthermore, have their tentacles spread throughout Latin America (Endesa) and in investments in the UK, USA and Brazil (Iberdrola). But despite colossal profits, Endesa and Iberdrola cut electricity access to almost one million homes across Spain in 2013.

Poster against the entrance of big energy companies into Latin America: “We will not permit the new invasion. Let’s defend our water and energy! Out of America: La Niña Iberdrola, la Pinta Fenosa and the Santa Maria Endesa. Stop the looting of transnational corporations!” Source: chavelaatravesdelespeco.blogspot.com.es

As unemployment affects 22% of the population in Catalonia, and all members of over 200,000 households are unemployed, being able to pay water bills is also a concern for many households. The price of water has increased 65% since 2008 and the Spanish Association of Environmental Sciences notes that in the Barcelona metropolitan area alone, the number of water supply cuts rose from 27,359 in 2011 to 72,039 in 2012.

To combat and find solutions to these injustices, the Alliance Against Energy Poverty (APE) was founded in November 2013 to unite a range of entities to fight for the right of all to basic energy, gas and water supplies.

APE brings together various entities, diverse in their ideological positions and in their ways of organising, like street-based social movements, both recent and historic, and more technical entities, which have worked on electricity, gas or water issues for years. While such a strategy has its challenges, as each movement has many actions and some participants don’t have the energy to engage in everything, overall APE is made stronger through the complementarity of its groups.

The technical entities lack a movement vision, while the street-based movements lack a lot of information to really understand what is happening”, as one activist explained. In this way, “each component teaches each other and learns from one another. We are not two fronts; we work together.”

A process of mutual learning also emerges between movements in the APE that are more ecologically focused and those with a more social emphasis, illustrating the vital importance of an integrated approach. The two APE activists interviewed come from the PAH, a housing rights movement, and found that other groups held many misconceptions about what the PAH fights for. Similarly, one stated:

When I came to APE I had no idea about environmental issues…But now seeing all the work [the environmental groups in APE] do and it has completely changed my view….I think the opposite has happened too. People who have had no contact directly with people unable to pay their energy or water bills were blown away when they came to their first collective advising session.”

The groups that founded APE were pushed to come together as energy and water companies “are scamming everyone, with the help of the government: here in Catalonia and in the rest of Spain.” It was critical to give visibility to the movement in order for the administration to see people organising to fight for solutions to the situation. Creating this visibility is fundamental as energy poverty is very much a hidden problem, and the strategy of companies is absolute silence:

The aid provided by Social Services avoids electricity and water cuts. But if they permanently avoid cuts in Barcelona, it seems like there are none….The city government pays and there are no cuts. The companies…you call them and they avoid the cut.”

In other words it is easiest for the authorities and companies to quietly respond, resulting in an image that the problem does not exist.

How does APE give visibility to the problem? The core way is by interacting with and mobilising the people who are living the problem through collective advising assemblies. For example, one of the founding groups Aigua és Vida has been denouncing Agbar, Barcelona’s private water company, for many years.

But if there are not people whose water has been cut, who are living the problem, it seems that the media doesn’t pay any attention and that politicians are not interested in solving the problem. Because there is no social clamour.”

So creating this “social clamour” is an important objective for APE.

APE operates at both grassroots and institutional levels, and like most movements develops its strategy through trial and error. Certain movements, which form part of it, participate in local government organised third sector tables, specifically one on energy poverty, and with the ombudsman.

APE also collaborated with the PAH to submit a Popular Legislative Initiative (ILP) to the Catalan Parliament with housing rights and energy poverty demands. The latter include stipulations for people in a situation of vulnerability to have guaranteed access to electricity, gas and water for 3 years, paying according to their capacity, with associated costs and debt assumed by the companies.

Three times the required 50,000 signatures were gathered for the ILP, and it was unanimously approved in the final parliamentary session in July 2015. How and if it is implemented remains to be seen, depending on upcoming regional elections and future rulings from the Spanish Constitutional Court regarding competencies for the execution of the ILP, a reality that points to the need for continued struggle.

APE and PAH members deliver 140.000 signatures of the Catalan Popular Legislative Initiative to the Catalan Parliament in Barcelona in May 2015. Source: lamarea.com

The core grassroots element of APE’s approach is holding bi-monthly assemblies where people having trouble paying their bills or who have had their energy or water cut explain their problem to the group, and solutions are found among all. Such solutions can include accompanying people to the company’s offices, or suggesting they go to government social services; there is also direct contact with the main electricity and water companies in Barcelona and phone calls can be made in extreme situations. The idea is to exhaust all paths so that later a company or the local government cannot say all formal paths weren’t followed.

Notes from one of APE’s collective advising assembly. Source: APE

Assemblies are places where affected people come together with solidarity activists to fight for their rights and to collectivise problem solving, where it is underlined that this is a problem that goes beyond our own bills. The fact that this fight is against multinational companies is emphasised in the assembly, where it is underlined that it is not just about a person coming to solve their individual problem:

We have to know that these companies export themselves and extract natural resources, and leave massive amounts of devastated forests….At least when people solve their problem, they have a little knot in their stomach that says, man, this goes much further. I have solved my problem, but this company keeps doing what it is doing.”

At the same time, APE’s work is moving slowly, step by step. An activist reflected that perhaps it is not easy to mobilise people who are unable to pay half of a €100 energy bill, and scrape together money from wherever possible to avoid electricity cuts; others manage to pay and are motivated to complain and mobilise.

“Nor thirst nor cold nor darkness” protest at an energy supply company’s office. Source: El País.

When APE was first founded it had an action-based strategy, feeling that they needed to go and organise a macro protest. To this end – to chants of “Endesa steals and the government collaborates!” – Barcelona’s Endesa office was occupied by 300 people for over half a day in March 2014. This action achieved a meeting with the Director of Endesa’s Catalan Office and Customer Services, resulting in five specialised attention points for people who cannot pay their energy bills to be set up across Catalonia.

However activists left the meeting with the feeling that “we were speaking to a wall”, as they had very concrete maximum demands, which the company, evidently, was not going to meet. Perhaps “now if someone goes to Endesa in the name of the Alliance Against Energy Poverty, they are treated differently”, but overall there is a feeling that there is a long road ahead in terms of collective action, as the experience from other movements has shown that many actions are needed before concrete results are obtained.

The scale of mobilisation is also critical: one of the activists noted that until they have a critical mass, APE can’t spend all their energy doing something just to show the “enemy” that they can mobilise people. Overall, organisers are very optimistic, but move one step at a time. As one activist underlined, “we are working for a future, for a present and for a future.”

Alliance Against Energy Poverty’s Red Book: a basic guide to energy poverty and what to do about it in Catalan and in Spanish.

* This post is part of a series sharing chapters from the edited volume Political Ecology for Civil Society. Melissa García-Lamarca’s contribution is included in the chapter on “Social Movements”. We are eager to receive comments from readers and especially from activists and civil actors themselves, on how this work could be improved, both in terms of useful content, richness of examples, format, presentation and overall accessibility.