Whose game is it anyway? Critical reflections on anti-poaching narratives

Nancy Peluso on Maids and other Mobile Subjects: Remaking Forests and Agrarian Environments in Indonesia 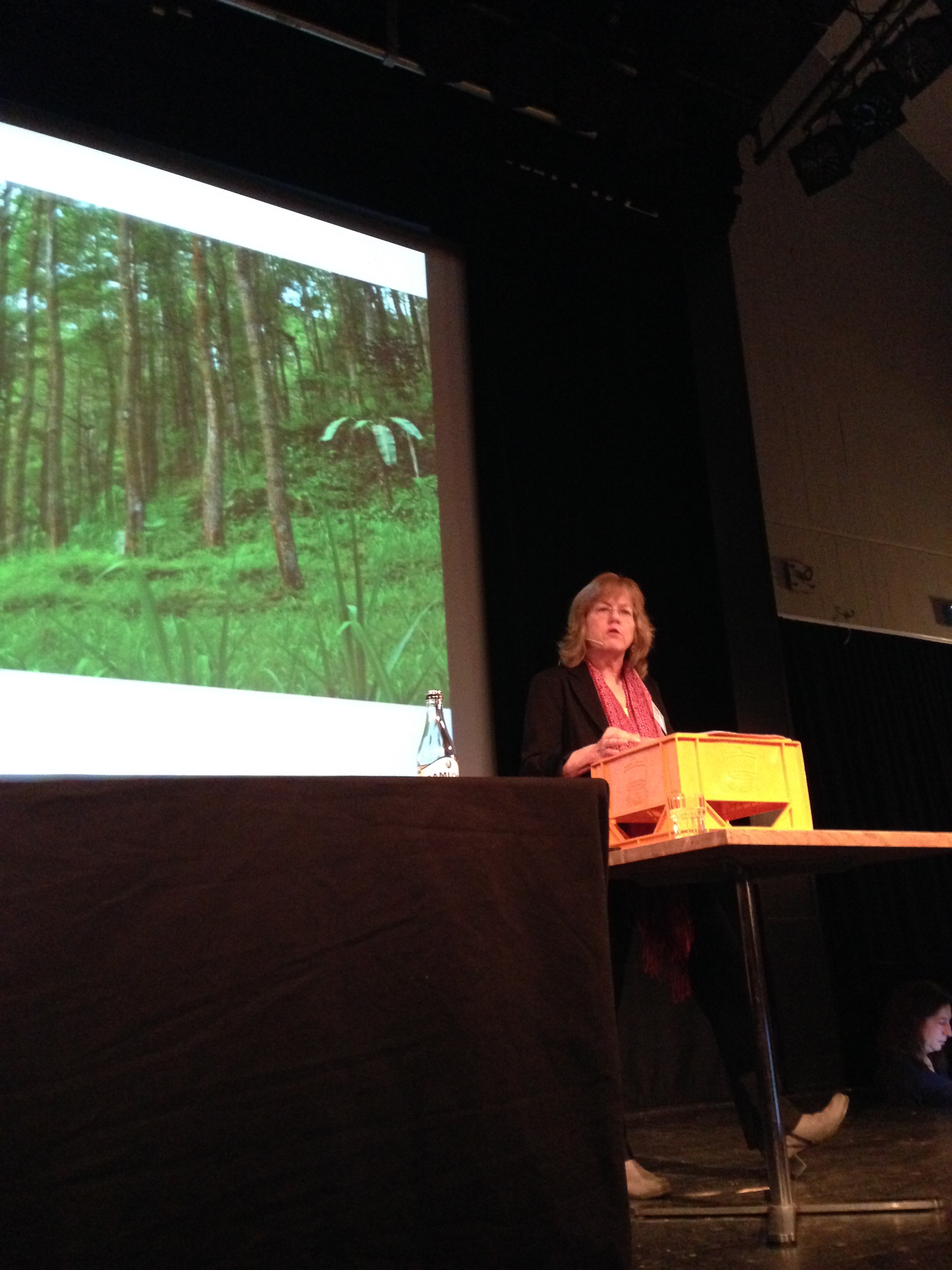 Reflections on the everyday dimensions of landscape production, agrarian transformation and the movement of capital that take place through the migrations and mobilities of landless women from the mountains of East Java.

This text is an abridged version of the keynote lecture given by Nancy Peluso at the Undisciplined Environments conference, organised by the European Network of Political Ecology (ENTITLE) in Stockholm, 20-24 March 2016. An extended version of this presentation was delivered by Professor Peluso as the annual lecture for the Singapore Journal of Tropical Geography at the 2016 Association of American Geographers conference in San Francisco. The entire piece will be published at the Singapore Journal of Tropical Geography in 2017.

Profesor Nancy Peluso at her talk at the Undisciplined Environments Conference, in Stockholm , 20-24 March 2016. Photo by Felipe Milanez

The ways that migrations and mobilities of people, capital, and resources articulate with the disruptive and undisciplined histories of capitalism, war, and environmental transformation clearly affect enclosures, commons, and other processes and institutions in agrarian and urban environments. Every year, tens of millions of new international labour migrants depart to work in different countries than their birth, and it is now well known that the remittances they send home are worth more than three times the value of all international aid (World Bank 2016). The International Labour Organisation estimates there are approximately 150 million transnational labor migrants worldwide, some 50 percent of whom are women (Hecht et al 2014). There has been some work tying together migration and agrarian change but nowhere near enough, particularly given the staggering size of those statistics (see e.g., McCay 2005; Rigg 2006; 2013; Kelly 2011; McCarthy and Ramesh 2014; Hecht et al 2014; Hecht, Kandel, and Morales 2012).

The Asian economic crisis, a global crisis in 1997-98, was both generative of massive change and part of a longer conjectural moment experienced in Indonesia; a moment that saw the converging of separate and often parallel historical threads and trajectories. At many levels and to much varied degrees, it affected the lives, land uses, and other dimensions of forested agrarian environments of sites across Southeast Asia, including Java, Indonesia.

One of the most immediate effects was that the demand for the mobile labour of rural Indonesian men in urban and industrial areas within Indonesia dropped radically. These men had left their villages to work in urban construction projects, factories, extractive industries, and other labour intensive projects. With the crisis, such development projects slowed down or closed entirely (see Breman and Wiradi 2002). A massive return of circular or labour migrants was forced on many villages that had been senders of this labour. As the crisis ended, labour migrations started up again, but opportunities for women to work transnationally also began to open up and to be regulated; new institutional mechanisms for movement arose.

I want to focus today on the quotidian / everyday dimensions of landscape production and agrarian transformation—especially in and around forests—that have taken place in a mountain area of Java as a result of labour migrations and other kinds of mobilities. These changes are being made through the practices and strategies of migrant labourers known as circular migrants. Some of the forests of montane Java are quietly and gradually becoming feminised spaces, as rural women migrating transnationally are transforming spatially socialised relations from a distance and eventually coming back to work there.

In the forest settlement area where I have initiated new research on the relations between forests and migration, poor landless women are providing micro-capital derived from their labour in global cities, investing it in their home sites and fostering agrarian change. Many of them leave their children with husbands, parents, and siblings, and travel to Hong Kong, Taiwan, and Singapore to work as domestic workers in others’ homes. From their work places across the South China Sea, they are radically transforming forest ecologies in Java, revamping their household and village economies, and financing family and village development. In the process, they are regendering forested agrarian landscapes. They are compressing time and space and environment in entirely new ways: through thousands of quotidian acts that are not part of a grand scheme or some kind of a resistance strategy. They are not attempting to build a commons on the slopes of the volcano. Moreover, not everyone involved in migration experiences positive results. But these acts, nonetheless, are collectively remaking both social and socio-natural relations on at least one volcanic mountain on Java.

For this forest settlement in particular, and in many other sites, the remittances from migrant labour are not enough to buy farmland, as land is far too expensive in Java. Rather, women are mobilising relatively small amounts of capital to buy dairy cows. The reproduction needs of these cows makes these forest settlement women responsible, arguably, for producing a majority of commercial resources on the forest lands where their settlement is located. People are planting elephant grass in every interstitial space they can find around their houses (built on specially designated forest land) and all over the forest floor below the primary, state-owned species of pine and mahogany. Elephant grass grows well even if just a little sunlight comes in through the forest canopies. The bulk of the resources coming out of these forests, therefore, are not timber or wood products, but grasses grown in and gathered from the forest to feed the dairy cows kept in pens next to their homes on forest lands. The cows also produce a great deal of milk, sold commercially to village and private milk cooperatives established only within the last decade or two.

Thus, the mobile people I am talking about today are not bosses, investors, or land grabbers. The mobile capital used to buy the cows is not corporate or state generated, but generated through the domestic labour of Javanese women working in global cities. The implications of urban domestic labour for forest ecologies and agrarian change in rural upland Java are profound.

This is not a story of simple rural-urban linkages. This is the linking of the megacity and the forest; a linkage being negotiated by landless maids, babysitters, and caregivers. These women have pushed a forest frontier of mountain Java to the global cities of Hong Kong, Taiwan and Singapore. They are in the vanguard of social and ecological revolutions at home, but not intentionally, not collectively, and not as part of any social movement.

This spatial or environmental regendering has come out of gendered patterns of and opportunities for accumulation; and these come from the conditions under which migration takes place. Regendering the landscape, in other words, has come from the differential capacities of men and women migrants to collect small amounts of capital: in the forest settlement site discussed here, these are not really differentiated by class but more gendered and spatialised positionings—in this case in specific relations of access to a government forest. We would expect this to vary, of course, in different sites with different political ecological circumstances. The result is that women who are landless by definition, living on borrowed forest land, are transforming and reproducing the forest’s understory as a new smallholder landscape.

The conditions of possibility were made by a millennial conjuncture—the coming together of moments in multiple parallel trajectories, each with its own historical importance, at the turn of the 21st century. These trajectories of relationships include, on the one hand, the forest–village relations; the relatively recent introduction of cows into this particular upland environment; the possibilities of feeding the cows from the forest–though not in the forest. On the other hand, is the development of legal institutions for women to migrate for work to Hong Kong, the conditions of work that allow them to accumulate what becomes micro-capital in Hong Kong and have family members buy and raise the cows in Java, and to have at least minimal protections in the course of that migration; and some luck in job placement. Men in the forest settlement were also tied in some ways to place: each household is required to have someone working for the government foresters and most local forest work is men’s work: collecting pine resin every two weeks, or occasionally engaging in logging and thinning. Men in the settlement were thus less likely to sign up for contract work requiring them to migrate for more than a few months’ work at a time.

These women remade the forest by making its most frequently harvested crop grass; the grass was to feed their investments–the cows. Dairy cows were a relatively new species in the forest settlement (though they had been brought into the adjacent village by other means during the decade previous to their arrival in the forest settlement). Forest worker families had to learn to take care of the cows and to connect to different markets for milk, or for selling the cows when they needed larger sums of money. For this, various cooperative arrangements came into being in the adjacent village that forest workers were able to access, including milk coops, collection points, cooling units, as well as those providing feed for the animals. Raising dairy cows is a practice that was not common here in the past. The practice has produced huge cultural and ecological transformations, as have the production, marketing, and drinking of milk. Women of the forest settlement are also engaged in shifting forest power relations, evidenced by the now dominant use of the forest understory for growing elephant grass, and the home improvements that nearly everyone with a migrating family member has made.

In some of Java’s mountain areas, remittances from women’s international labor is reshaping forests. Given the great increases in transnational migration and the numbers of migrants from forested and other agrarian areas, this case illustrates why we should not think about the political ecologies of forests and so-called commons without considering the roles of migration and mobilities. I would go so far as to say that we need to re-examine earlier analyses of forest-making trajectories and to ask explicitly how migrations into and out of forests have shaped them.

*Nancy Lee Peluso is a Henry J. Vaux Distinguished Professor of Forest Policy in the Department of Environmental Science, Policy, and Management at the University of California at Berkeley.