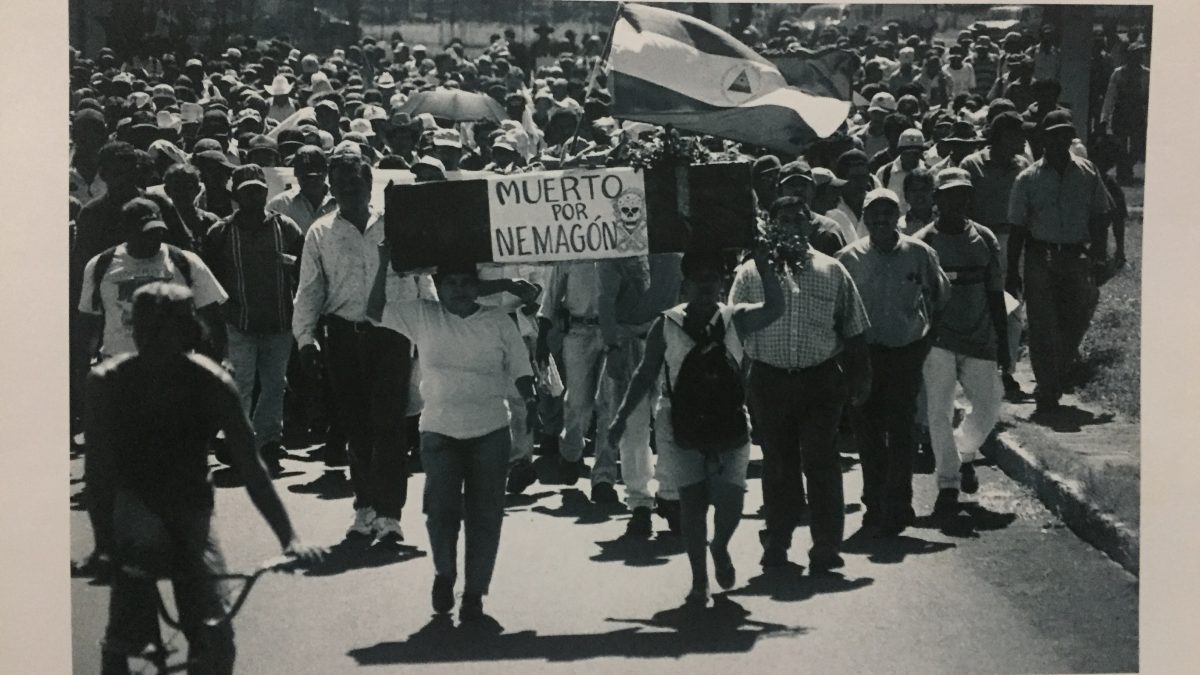 The impacts of the pesticide DBCP on women are largely understudied in comparison to infertility in male workers which is well documented. What are the gendered consequences of this ‘undone science’ and how are these shaped by ingrained power dynamics within local workers organisations?

The manufacturing, use and disposal of pesticide used in agricultural production is affecting the health of thousands around the world. According to the World Health Organisation, unintentional pesticide poisonings account for around 20,000 deaths yearly. This number might be higher. This is especially true for the Global South, where weak health care and monitoring systems often lead to underreporting. In Nicaragua, for instance, it has been estimated that only 1 of 22 cases of pesticide poisoning (around 30,000)  are reported. 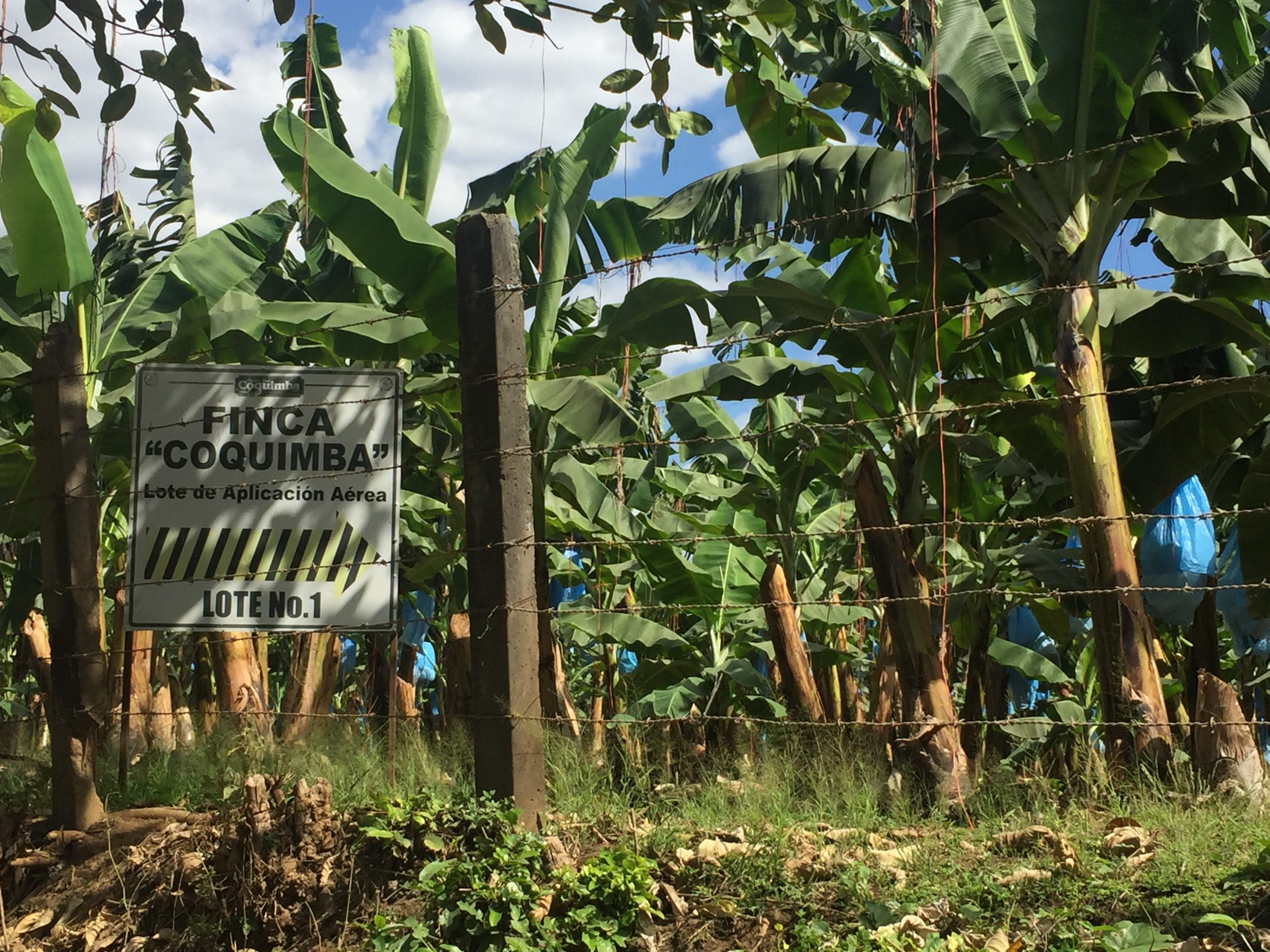 ‘Area of area fumigation’. Banana plantation in Chinandega, Nicaragua.[Picture by the author].

But pesticides not only cause acute poisoning. Some are associated with long-term effects such as chronic illnesses (i.e. Parkinson’s disease, cancer, and hyperactivity disorder, among other diseases). Pesticide poisoning is only the tip of the iceberg. Notwithstanding, there is a lack of knowledge and understanding of the chronic impacts of pesticides.

This can be explained because pesticides are complex and so are their unwanted health effects. For instance, different pesticides, quantities, forms, and exposure lengths can have different consequences in different bodies (see Barbour and Guthman 2018). Also, the same pesticide can have different results when exposure occurs under different conditions (i.e., humidity, wind velocity). Or, as Jill Harrison explains in her book Pesticide Drift and the Pursuit of Environmental Justice’ (2001), pesticides move through the soil, water and air, affecting not only the health of those directly exposed (such as farmworkers)  but also the health of communities living miles away.

Therefore, finding evidence establishing a causal link between a specific pesticide and a long-term health impact is a hard (if not impossible) task for local communities. In particular, communities that sue pesticide producers and user companies in trials aim to claim monetary compensation for the ailments suffered. The scientific evidence proving a causal link between pesticide and their health consequences is key in those procedures.

Unfortunately, pesticide producers and users’ companies often use the lack of scientific knowledge that proves these links to dismiss the affected communities. In other words: “If there’s no evidence, there’s no victim”.

In a recent publication in the Journal of Peasant Studies, I dig into this problem and analyse the case of the struggle of banana plantation workers who have demanded (and still do until very recently) redress for ailments caused by the pesticide Dibromochloropropane (DBCP). While DBCP was used throughout the Central American region and other places, I here focus on the case of Nicaragua.

Based on interviews with former workers exposed to DBCP and fieldwork carried out during 2017 and 2018, I show how, despite women and men having been exposed to DBCP and allegedly being affected, some of them (in particular men) have been acknowledged as victims while others (in particular women) have not. This, I find, is for two main reasons. First, the gendered consequences of the so-called ‘undone science’ and second, the gendered power relations within the local organisation created to claim justice and compensation in the judicial arena.

The toxic legacy of DBCP

DBCP is an organochlorine pesticide manufactured by Dow Chemical and Shell Oil Company in the 1950s. In 1977, in a DBCP producer plant in California, workers started to share with one another their inability to father children. Worker’s concerns led to an epidemiological study that revealed the relationship between the length of DBCP exposure and sperm count—the more exposed, the lesser or null the number of sperm leading to infertility. As a result of the study, DBCP was banned in the US in 1979; but continued to be shipped and used abroad (in Central America, Africa and The Philippines) with no restrictions nor warnings up until the late 1990s.

DBCP is not an exception but a common historical practice by pesticide producers and user companies. As David Weir and Mark Schapiro stated in their book  , “companies can play as they move their poisons from one country to the next, trying to maximise sales before their pesticides are banned again” (Weir and Schapiro, 1981, p. 22). Due to the poorer regulations, DBCP was sold as an efficient and cheap soil fumigator in Central America, including the province of Chinandega, where I carried out fieldwork. Quite predictable, by the end of the 1980s, Nicaraguan farm workers started noticing their inability to father children. Still, many other health problems were reported by women farmworkers such as miscarriages, cancer, disabilities in newborns, and skin disease.

When workers knew about the Californian episode, they demanded trials to claim monetary reparations for the health impairments caused. The evidence backed up by the epidemiological study in California, however, automatically minimized the chance of thousands of women farmworkers to pursue judicial activism to claim reparations. Only male infertility was scientifically backed up by then, leaving aside other health effects on women also caused by DBCP, according to women. As stated by a woman: “‘I know that this is because of the bananeras [and DBCP] because I was healthy when I started working there, but then I progressively became very ill’. 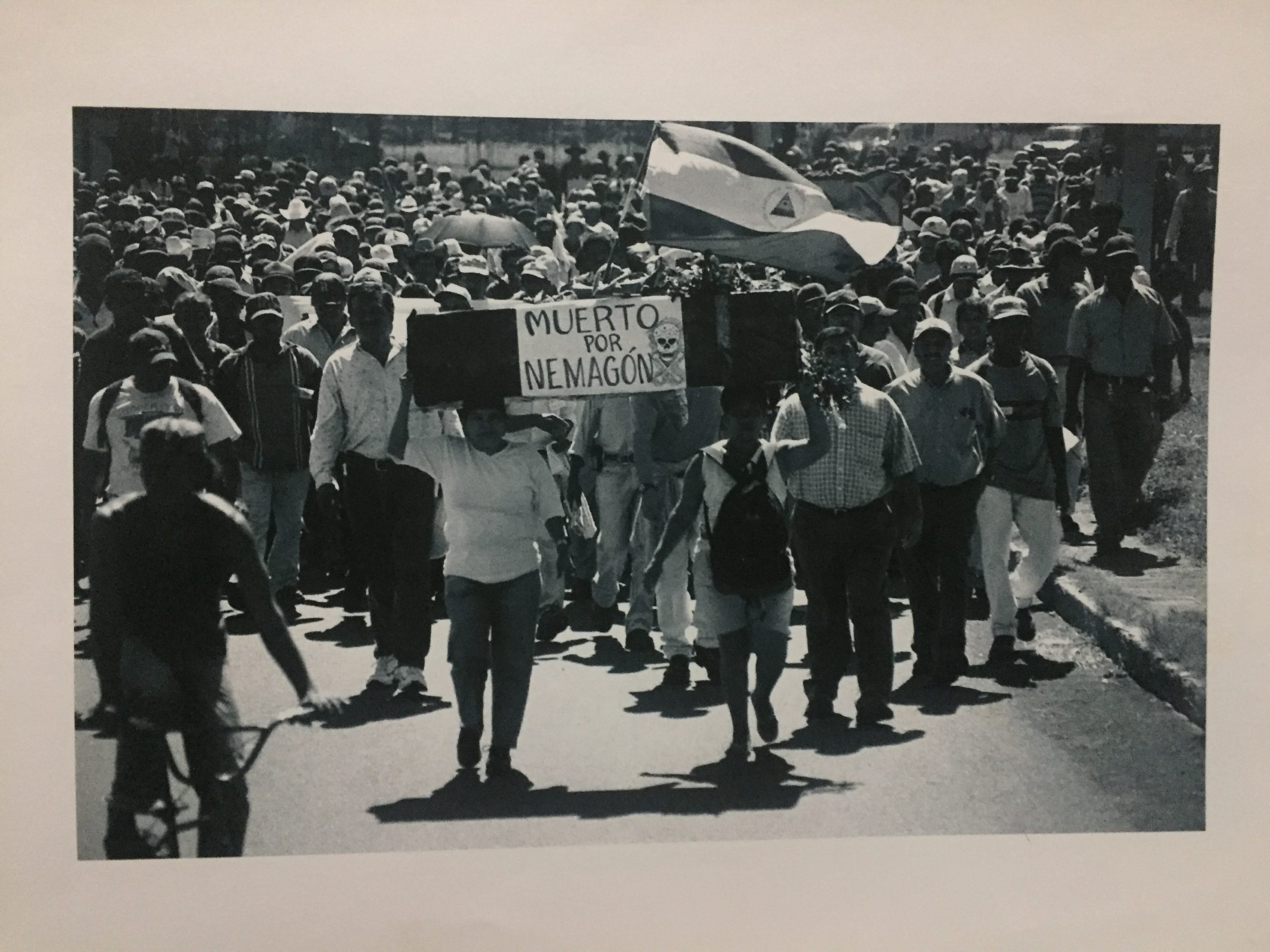 Protests of affected workers in Managua, the capital of Nicaragua [Source: courtesy of the National Movement of Workers affected by Nemagón and Fumazone (MNAN)]

The gendered consequences of ‘undone science’

Undone science refers to research that hasn’t been done. It is defined as an “area of deficient or non-produced knowledge but identified by civil society as worthy of more research” (see Hess 2016 for more details). The missing epidemiological studies on women’s bodies and DBCP can be framed as one example of undone science.

The problem faced by women in Nicaragua is, however, not an exemption in medical research, which historically has been focused on male biology. As Ana M. García points out, research on pesticide-related health effects has been historically focused on industrialised countries and men (see García 2003). According to García, this is most often because of the common perception that men are those directly exposed in the fields. Nevertheless, women’s exposures to pesticides are higher than is worldwide recognized through the Western medical scientific gaze.

As Julia, a former banana worker who I interviewed stated:

“We struggled a lot to be medically checked. We asked for medical studies in Managua and asked the government to help us in identifying DBCP-linked effects. But only men were tested. They argued that only men were directly exposed in the fields”.

Women were exposed to DBCP in the banana packing area (by inhaling the pesticide), in the fields when they used to bring lunch to their husbands, and even when washing their husband’s DBCP-soaked clothes. This, however, had not opened a research agenda on the issue.

The ‘undone science’ is not the sole reason women were disregarded as victims of DBCP. Nicaraguan women’s marginalised position in the decision-making processes within local organisations has also been a key factor in minimising their voice, interests and needs. As I describe in the article in greater detail, the local organisation in charge of demanding monetary compensation in trials was hierarchical and male-dominated.

Besides pushing for more studies that would consider the impacts of the pesticide on women (doing the undone science), the emphasis on male infertility left in a second-place the struggle for the recognition of the diseases suffered by women banana workers. Indeed, when women realised they would not be represented in court, many quit the organisation.

As mentioned by an ex-farmworker of the region: “In the beginning, there were a lot of women in the struggle. Now, they don’t come anymore. They are ‘hopeless’ and don’t trust the leaders anymore. My wife, for instance, she is also a victim. She worked in the banana-packing area, and she is ill, but she doesn’t come anymore. She says that this struggle is a waste of time and money.”

Today the case of DBCP in Nicaragua as well as in other countries, is widely known as a toxic injustice. It is important to stress that this injustice is gendered. Understanding how communities respond to toxic injustice requires understanding how these responses are mediated by the politics of knowledge production and the ingrained patriarchal structures at the most local and intimate scale.

Grettel Navas is a Researcher at the Institute of Environmental Science and Technology of the Universitat Autònoma de Barcelona (ICTA-UAB). Her research interests include Environmental Justice, Political Ecology, Toxic Pollution, and Public Health. email: grettelnavas98@gmail.com