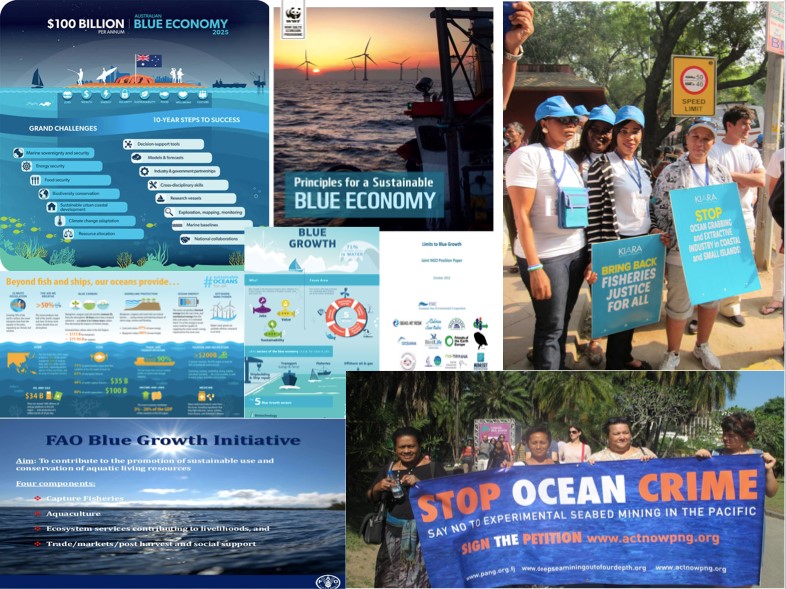 A recent special issue critically interrogates the rapidly expanding “Blue Growth” imperative – and proposes an alternative imaginary for the use of, access to, and social relations with the seas and oceans.

The publication of a “special feature” in Sustainability Science on Blue Degrowth and the Politics of the Sea: Rethinking the Blue Economy was mainly motivated by a deep frustration, a frustration that indicated the need to initiate such a debate. As (marine) social scientists and political ecologists, we have both been participating for a number of years in meetings on ocean governance and marine policies (such as for example meetings related to aquaculture, fisheries, marine protected areas etc.), organized by and with different actors such as the European Commission, Advisory Councils, and environmental NGOs, among others.

In all these events, what was striking was how the “growth imperative”, namely “Blue Growth” in marine discussions, was accepted as a given fact and as the discussion’s point zero. Even the most critical NGOs working on marine issues have been compliant to this narrative, promoted by powerful global actors (private, governmental or inter-governmental) as the “universal truth” and almost like a “common goal that unifies us all”. Though there has been some debate on the issue, it primarily focused on how to ensure growth in marine areas and how to make Blue Growth “sustainable”.

There was limited space to question the objectives of these policies. It rather seemed ridiculous and extreme to do so. It was more often than not, that we faced the shocked expression on the faces of politicians, policy-makers and private actors alike, whenever we suggested that seeking for continuous growth as a policy might perhaps be itself problematic, and that maybe the main objectives of the policies should be defined differently.

Since the European Commission’s Communication on Blue Growth opportunities for marine and maritime sustainable growth was published on 13 September 2012, Blue Growth has been the main header in almost all European marine circles. The Communication pointed out five main areas for Europe’s growth in the seas and oceans: (i) blue energy, (ii) aquaculture, (iii) maritime, coastal and cruise tourism, (iv) seabed mining, and (v) blue biotechnology.

Exposed to these debates, we felt that there was a need to have a serious confrontation with the Blue Growth imperative. As we discuss in the special feature’s editorial, Blue Growth has become an archetype among the different regional and international institutions and marine circles. However, there is not one agreed-upon definition. Some use the term to promote a new and more “participative” governance of seas and oceans, ignoring the failures of the extractivist mode of governance on land, whilst others take a more factual interpretation of the term, and focus on the profit-making potential of (new) marine sectors, and exploring further the potential of the marine space as an extractivist frontier.

Following the coining of the term in the 2018 article A call for a blue degrowth: Unravelling the European Union’s fisheries and maritime policies, we proposed to initiate this debate during the POLLEN18 Conference in Oslo, Norway. The conference became an important gathering with most of the authors of the special feature being part of a two-session panel on Blue Degrowth. It was evident that the critical marine social sciences were yet to engage the degrowth debates (and vice versa). Some panel discussions around the most common debates linked to degrowth (such as whether degrowth could be a useful term or slogan) were usually new for critical marine social scientists; conversely, engaging with the political ecology of marine issues was enriching for degrowth scholars and practitioners.

In the special feature, we argue that the Blue Growth imperative needs to be problematized and critically examined. Therefore, we use the concept Blue Degrowth, which emerges from (i) the need for confronting the new—but becoming rapidly dominant—“blue” growth imperative, and (ii) the quest for an alternative imaginary for the use of, access to, and social relations with the seas and oceans.

Blue Degrowth is thus a multifaceted concept, offering both a criticism to the Blue Growth imperative, and an umbrella concept to bring together the struggles of communities against concrete projects “on the ground”. It aims to guide the political discussions around the seas and oceans, as well as to uncover and contest its failures, injustices, and negative impacts, at different ecological, political, and social levels. While Blue Growth is at the centre of most current strategic and political marine discussions, Blue Degrowth intends to deconstruct the “win–win” argument of this imperative. It does so by building on degrowth debates and linking them with the element of the seas and oceans and by highlighting a range of struggles for social and ecological justice around the world.

The special feature brings together 10 articles written by authors from different social science fields (such as geography, STS, ecological economics, political science and political ecology) with critical perspectives on marine issues and on the recent debates. Drawing on case studies of Iceland, Namibia, Turkey, and Papua New Guinea, among others, the articles critically examine different dimensions and strategies of Blue Growth and make a call for alternative imaginaries related to seas and oceans.

Links to the articles in the special feature are provided below:

Editorial: Blue degrowth and the politics of the sea: rethinking the blue economy by Irmak Ertör and Maria Hadjimichael

Growth in the docks: ports, metabolic flows and socio-environmental impacts by Borja Nogué-Algueró

The paradox of sustainable tuna fisheries in the Western Indian Ocean: between visions of blue economy and realities of accumulation by Mialy Andriamahefazafy, Megan Bailey, Hussain Sinan and Christian A. Kull

“Re-grabbing” marine resources: a blue degrowth agenda for the resurgence of small-scale fisheries in Malta by Alicia Said and Douglas MacMillan

Blue Growth and its discontents in the Faroe Islands: an island perspective on Blue (De)Growth, sustainability, and environmental justice by Ragnheiður Bogadóttir

Designing sustainability in blues: the limits of technospatial growth imaginaries by Duygu Kaşdoğan

** Maria Hadjimichael is a post-doctoral research fellow at the University of Cyprus. Her main research interests fall within the scope of environmental politics and the commons.

** Irmak Ertör is a former ENTITLE fellow and a political ecologist working on marine themes, especially on aquaculture, fisheries and environmental justice. Currently, she works as an assistant professor in the Bogazici University, Istanbul.

Featured image: Collection of infographics on the Blue Growth and pictures of mobilisations for marine social and ecological justice, presented by Maria Hadjimichael and Irmak Ertör at the 2018 POLLEN conference in Oslo. Photo credit: Irmak Ertör.