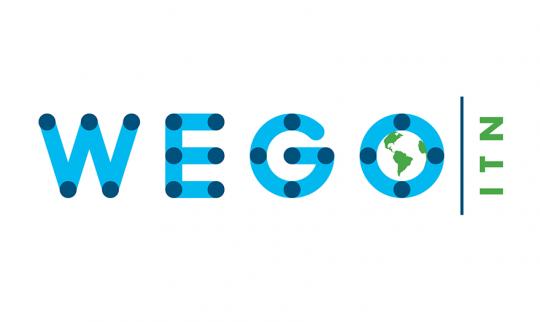 Wendy Harcourt shares snapshots of a feminist political ecologist’s life over the summer where she was able to reflect and think about different socio-natures together with colleagues/friends of the Well-being, Ecology, Gender and cOmmunity – Innovation Training Network (WEGO-ITN). Her light descriptions point to thicker moments of making meaning in conferences, courses and communities.

The events of the summer I want to write about are each marked by three very different images of socio-nature as I lived it over those months. One is a glorious sunset by a lake, sweeping those of us gathered together on the lawn into a sense of hope and wonder as we began a week together of making community in Bolsena, Italy. Another is a small, busy robot cutting grass endlessly in Oslo, which our study group sitting cross legged on the grass tried to ignore until it chomped up one of the student’s glasses. And the third is of a conference and my silent conversation with a tree through a large window beyond a room of full of puzzled conference participants. 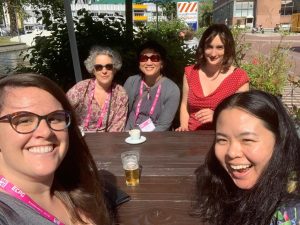 Let me start with this last image. Together with members of the EU Marie Curie Innovative Training Network Well-Being Ecology Gender cOmmunity (WEGO) I was attending a large European feminist political conference in Amsterdam.

Before going, I had envisaged a rather staid event but given its proximity to those of us based in The Netherlands and Germany we saw it as a chance to present some of our first feminist political ecology musings. Our panel, held early on in the proceedings, had gone well enough. The WEGO group stuck together and tried to navigate the scene. International conferences are all about who knows who and we all felt a bit out of our depth. I have no idea if I was following the right sessions, but in several I was surprised to find sudden bursts of rage across race, class and generations. There were even tears. Older white feminist academics were decrying students’ protests at the deep racism in universities, feeling such criticism was undermining their earlier struggles for recognition. The key note speaker, a woman of colour from the US, whom I recognized had come to our panel – spoke bluntly, albeit with humour, about eurocentrism, racism and white privilege. Her invitation of refusal and the intergenerational jolts which broke out in the sessions were ran like currents around the meeting. It was hard to know where to engage.

The last day, I joined a roundtable. It was a packed room. It was a heavily theorized discussion on materialism, and speakers spoke plainly about racialized generational schisms in universities. I found it insightful. But materialism, I thought, surely meant not only social difference in academic discourse? What about the reality of climate change, the fears and concerns we have about the impacts of a ruined environment in the socionatures we inhabit that inform our different subjectivities?

As I sat in the room, waiting to speak I looked out at a tree through the window. Here was another being dealing with years of change, living with humanity as it molds an urban environment. Its quiet presence reminded me of rooted and networked connections on which we and trees need to thrive. When I was called on to speak I tried to make the connections with feminism and the politics of climate change, of the need to think beyond humanity, of how we have to understand how the term ‘us’ can include not only other generations, other races, other genders but also other than human beings. My question, with its silent appeal to the tree, was met with polite puzzlement, what did a tree have to do with feminist politics? What kind of eco-feminist romance was this? 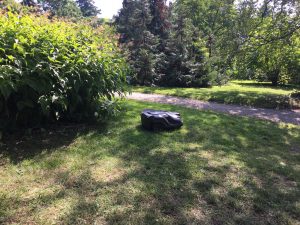 The second image, is of the little robot cutting the drying grass in the University of Oslo grounds, on a far too hot summer day. I was there as part of a summer school on feminist political ecology. I was again with WEGO colleagues and students. We were a small industrious group, but no one wanted to be in a classroom in these oddly hot days. Our thoughts were all about swimming in the fjords. Sitting on the grass under the shade was the compromise. But the little robot was not programmed to deal with people, rather with trees and the edge of lawns, so it kept coming back to cut the grass under us. It became part of our environment, until it attacked the student’s glasses and I picked it up. It switched itself off with a squeal. Nature and culture were trying to find ways to be together, in what seemed gentle, amusing ways, but what, I wondered would happen if this kind of summer, became the norm? Surely Oslo University would not need busy little robots to cut short, dusty grass. I later walked through the botanical gardens and watched as Norwegian families were out in hordes, sun bathing, playing frisbee, tossing balls to children, eating ices, drinking beer. The hot houses were steaming in the heat, along with the reddening people frolicking on the lawns. It was fun to watch, the lilies were wonderful, the people beautiful, but like the little robot there was a lurking sense of danger, of something not quite right in this socio-nature. 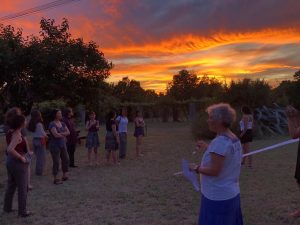 Sunset at the start of the Feminist Methodology retreat at the Convento S. Maria del Giglio

Finally, we come to the last image of glorious sunsets by an Italian lake. We were on the shore of the Lago di Bolsena beginning a feminist methodology retreat in the Convento of S. Maria del Giglio. Again, I was with some of my WEGO colleagues and students along with others for a week together. Unlike the other two events it was not an official academic meeting with papers to present, academic experience and credits to gain. We spent a week learning from each other, breathing in the history and beauty of the place, the food, the animals, the plants, the sense of quiet and the chance to reflect. We dwelt on our emotions, our fears and our hopes in this special socionature. It was also hot, but it was expected heat, mediated by the thick cool walls of the convent. We ate light, delicious food, aware of the cook Lorenza’s skills as she spun local produce into wonderful feasts. The difficult politics of the place infiltrated, the church, the local and national politics. Along with the impact of the tourism, and the fierce competition about which was the best ice cream. How did the local communities – peasants, entrepreneurs, migrants, families –  deal with economic crisis? With their growing dependence on tourists? Who produces the mythic Greco-roman pottery that decorates the castle area? Why are there shops full of Indian saris refashioned into European type wear?

These questions formed the backdrop to our discussions about how to deepen our feminist political ecological thinking. We discussed texts, asked questions in small groups. We came together in the evenings to drink wine and think what next. We played, we drew, we wrote poetry, we explored the boundaries of what knowledge counts. We felt blessed, but also uneasy, from where do we go with this privilege, these hopes and possibilities? The convent, a 17thcentury building owned by the Franciscan order, welcomed us, as did the goats, the olives, the shade by the vines and pear trees, the smell of lavender and the cool of the evening breeze that greeted us in the open windows, courtyards and cloisters. It was a retreat, it was not our every day, but it refreshed us, energized us to share, to laugh, enjoy and keep going.

Wendy Harcourt is Professor of Gender, Diversity & Sustainable Development and Westerdijk Professor at the International Institute of Social Studies of Erasmus University Rotterdam in The Hague. She is Coordinator of Well-being, Ecology, Gender and cOmmunity – Innovation Training Network (WEGO-ITN)