by Germán A. Quimbayo Ruiz

In Bogotá, urban nature suffers from pressures for urban development, profit-making and corruption. But it has also been mobilised as a legitime vehicle in pursuit of a more just city-region.
Bogotá is facing several environmental challenges, from air pollution and public transport to continuous pushes for profit-driven urban development, contested by urban nature advocacy groups. Struggles around nature and the urban are not a new thing in the Colombian capital. A new publication contemporary social movements and urban nature in Bogotá, Colombia, was recently published in the Journal of Political Ecology and this post summarises its main contributions.

The politics of urban nature in Bogotá: urban development versus trees and biodiversity

Recently, the current administration of the Capital District of Bogotá has been carrying out a massive process of tree-cutting in parks and public spaces across the city, not considering or differentiating the socio-economic condition or level of income of residents in these various neighbourhoods. In fact, it has approved the cutting down of over thirty-four thousand trees where a third of this has already been cut. The whole process of tree-cutting is justified by the District administration as a sanitary measure, or, due to the development of urban regeneration projects or the establishment of sports courts for public use.

Most of tree-cutting has been contested by citizen organisations and some politicians at the city council who claim a lot of irregularities in the way cutting down trees has taken place, including no prior consultation with residents or local communities, a problematic technical assessment for deciding what trees are cut, and the subsequent compensation process after cutting down. Moreover, conflicts of interest have been pointed out to exist behind such projects and private contractors related to the real state sector. Trees thus are being sacrificed for urban development.

But tree-cutting is only one in a series of measures taken by the current District administration headed by Mayor Enrique Peñalosa (second time in office) which jeopardize ecological values in urban protected areas such as wetlands or hills. For instance, large-scale urban development projects have been announced that threaten important ecosystem areas of the city-region such as the Urban Forest Reserve Thomas van der Hammen, parts of the Bogotá’s Eastern Forest reserve (Cerros Orientales), or local wetlands. Political tensions around urban nature culminate on the back of such, recent, policies. However, issues of urbanization and nature are not new in the recent history of urban planning in Bogotá.

In the article I wrote for the Journal of Political Ecology, I discuss how urban nature in Bogotá has been used as a vehicle by social movements to claim urban commons. In so doing, I explore the “environmentalization” of strategies and repertoires of social movements in urban struggles dating back to the 1980s, which developed in parallel with urban planning debates. In the contemporary history of the Bogotá-region, a process of political mobilization around environmental issues has been a way to contest unequal urbanization that destroys urban commons, such as urban development in protected areas or the unequal allocation of high impact activities (quarrying or landfills) in marginalized peri-urban and rural areas.

The emergence of environmental claims in the city

Since the late 1980s, a set of civil groups and organisations in Bogotá has been promoting urban nature, marking the emergence of an environmental claim and a movement. This movement comprises grassroots organisations, scholars, and practitioners, who formerly advocated for better urban services but later expanded their focus on urban nature. While social movements at the time engaged mostly in contesting state policies of repression over marginalised communities, and the eruption of paramilitarism, drug-trafficking, and crime in certain neighbourhoods of Bogotá, some legal measures were issued by the Colombian State regarding environmental management and the governance of natural resources, especially during the 1990s. This was the opportunity for the “environmentalization” of civil organisations and the beginning of a movement for the “right to the city” through advocacy around the protection of ecologically important areas, mainly, wetlands (one of the most relevant cases in Bogotá) or certain urban green areas.

In addition, such organisations have been building a territorial attachment with some elements of urban nature through the re-appropriation of the scientific-political concept of “Main Ecological Structure” (MES) (Estructura Ecológica Principal), developed by Dutch-Colombian ecologist Thomas van der Hammen in 1998, as a structural framework for environmental planning in the Bogotá region. The concept of territorial attachment refers to the multiple possible everyday “appropriations” of urban nature by people in their neighbourhoods. For instance, it can apply for articulating “right in the city” claims while also protecting an ecological area like the Cerros Orientales through the establishment of ecovillages (Ecobarrios). Likewise, it has served young activists in their struggle for the right to live in a worthy landscape affected by illegal quarrying activities and land speculation in a marginalised area, through the promotion of a protected area called Cerro Seco, southern the District in Ciudad Bolívar.

People have mobilized concepts related to MES, such as environmental territories (territorios ambientales), in order to address concrete socio-ecological inequalities throughout urban-rural continuums and in efforts to establish urban commons beyond jurisdictional divisions. Some of the strategies and repertoires of contention used by social movements include democratic participation and solidarity networks, engagement with allied experts in ecology, and the use of legal advocacy. More recently, several social organisations have also been mobilising participatory science projects in urban biodiversity in wetlands and urban parks.

What their struggle also puts forward is the legitimation of power beyond hegemonic expert knowledge represented by state institutions, and rather the legitimacy of knowledge and law co-created by communities. Social movements have contested the scattered and weak implementation of regulatory measures by using available legal tools. One such example is the implementation of urban planning measures such as the Master Plan for Land-use in Bogotá (Plan de Ordenamiento Territorial-POT), where situated knowledge is intertwined with scientific and legal languages.

This movement has not been without contradictions. Inequalities and power relations are shaping the actions of civil organisations and are to be found also among and inside such organisations. For example, some leaders and activists did note a level of disengagement among people involved, often shaped and conditioned by their socio-economic shortcomings, like don’t have enough money to “make a living” through the activism. In some other cases, people were accused of benefitting personally from doing politics with governmental agencies, and thus “betraying” the activist movement. Others were accused of exploiting their involvement to access resources or political lobbies. The case of Bogotá shows the myriad of different interests nuanced with class, gender, or privileged positions, which are converging in urban nature advocacy.

Pursuing democratization or urban commons contrasts with the idea of the Colombian “long-standing” democratic system and rule of law, which has been put in question by state corruption, a persistence of violence, and crime. When Colombian environmental struggles become globally known, unfortunately, there are consequences: the country is one of the most dangerous places to be an environmental activist. Although, figures regarding violence against activists in Bogotá are lower compared to other regions in the country, activists in the Capital District do suffer violence, stigmatisation and harassments.

While urban politics in Latin America have long related to demands for social justice, it is also important to document how such demands are articulated through environmental concerns. Colombia is one of the countries with the highest levels of biodiversity. Colombian cities and main urban areas such as Bogota-region can be also considered as biodiversity “hotspots“. However, the long-time constraints of the current institutional setting (and its entanglements) keep ecosystem protection, management, and related urban planning measures from being realised.

After the signing of the peace accords between the Colombian government and the Revolutionary Armed Forces of Colombia (FARC), in 2016, the implementation of such accords is at stake in the current political conjecture. Violence, corruption, and environmental destruction do not stop, on the contrary, are unfortunately increasing. Environmental concerns in the country are in the spotlight, and Bogotá as a political center is not detached of such concerns, but communities and stakeholders concerned are trapped at a (neoliberal) state bureaucracy.

Narratives of Colombian “urban miracles” are still common in international circles of urban planning, represented by so-called “best practices” carried mainly in cities such as Bogotá (see for example the long-praised Transmilenio-Ciclovía) and Medellín. But in these stories of urban sustainability, less attention has been paid to the urban nature embodied in hills, wetlands, rivers, streams, and green areas. In recent years, local administrations in Bogotá have addressed these issues ambivalently and the social movements promoting oversight and accountability of such environmental commons have to deal with such ambivalence.

Civil society organisations and citizens have had the opportunity to be part of “participation” processes, but final decisions were distant from their demands and views, even under District administrations with progressive political approaches (in the mid-2000s and the first part of the 2010s). Nowadays officers at the government agencies see the practice of urban planning as a technical matter, not a political one, even if such practices are favouring private interests (e.g. cutting urban trees or developing infrastructure, or constructing in protected areas). The political dimension of environmental issues in Bogotá is only understood by officials from the current administration as an opportunistic association with people of similar interests seeking power. But, in such a way, the essence of the political, aka the right to debate and even dissent, is denied. 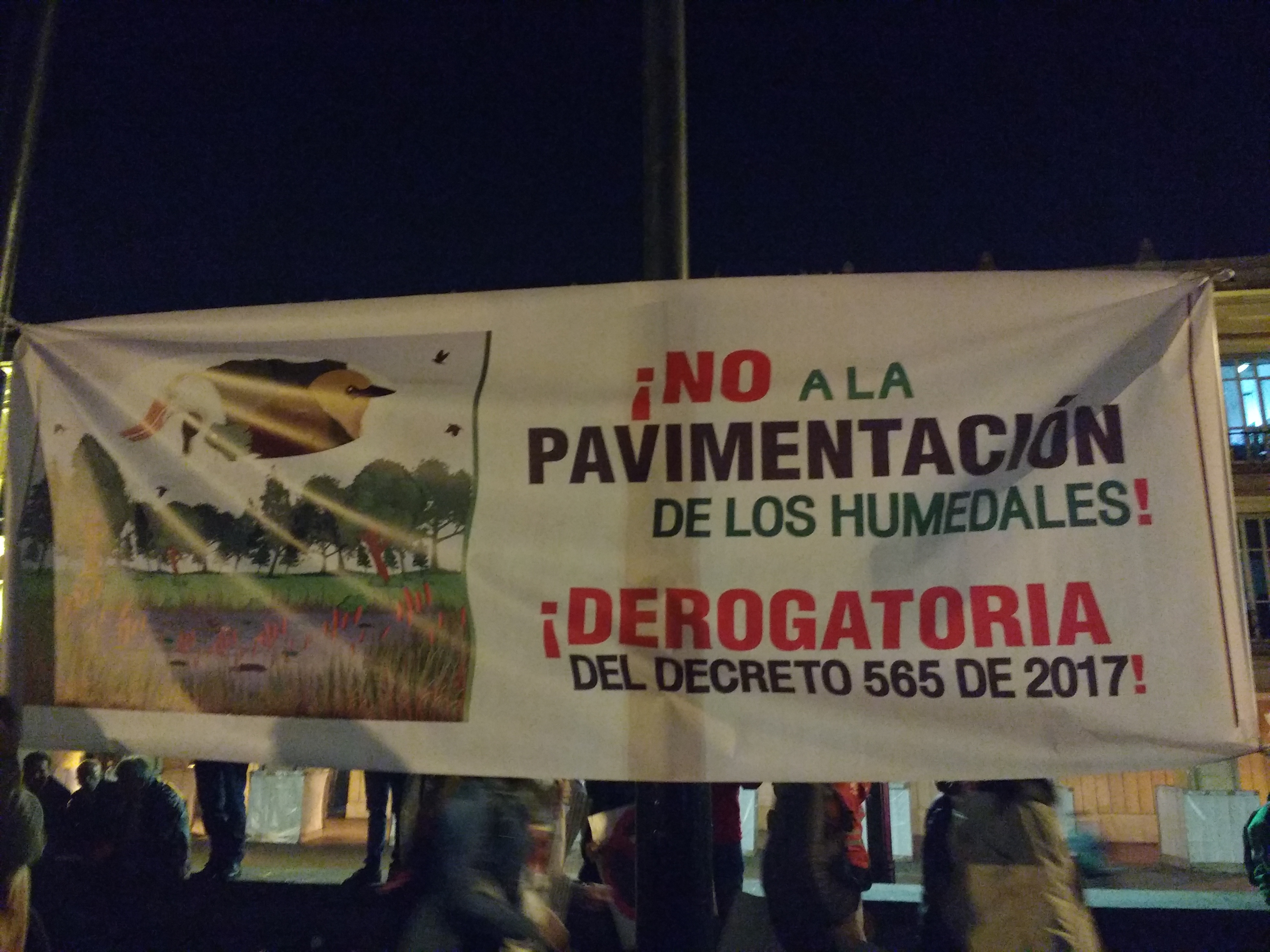 A banner in a demonstration in Bogotá regarding one of the recently issued policies, which is affecting wetlands. February 2018. (photo credit: Germán A. Quimbayo Ruiz)

The urban political process regarding nature in Bogotá has been embedded in a volatile political landscape marked by corruption and the lack of a long-term shared vision enduring from one mayor and administration to another. The successive administrations from the 1990s to the present day, regardless of political affiliation, have distinguished themselves (although with different approaches) by promoting urban transformations in a context of economic globalisation, and the influence of national and transnational capital flows. Thus, urban and environmental policies in recent years form a heterogeneous assemblage and an unstable combination of ideas and techniques of local governance, and would not have been possible without the everyday agency of people.

The role of environmental organizations is still present as a process of social innovation for urban nature advocacy through individual and collective actions of political mobilization addressing the question: urban space for whom? Likewise, another main input from this movement has been to keep the environmental concerns alive within local urban planning agendas and debates, such as the current drafting of a new Land-use Master Plan for the city for the next 12 years. So far, the lesson from Bogotá is that nature has been used as a legitime vehicle to pursue a more just city-region.

Germán A. Quimbayo Ruiz is an Ecologist and Geography MSc. Researcher and Ph.D. student in Environmental Policy at the Department of Geographical and Historical Studies, University of Eastern Finland, Joensuu. Previously, Germán has also worked with environmental state-agencies and local organizations in Colombia. His PhD research funded by the Rodolfo Llinás Founding Program (CEIBA Foundation, Colombia), analyses a set of contemporary environmental conflicts regarding urban planning and nature, in Bogotá, Colombia. Disclaimer: This text does not reflect the vision of CEIBA neither any other institution, just the author’s.