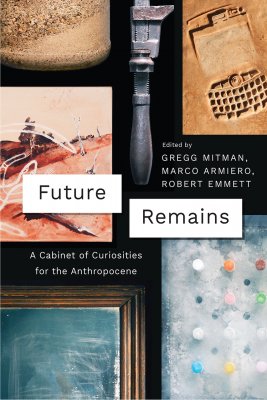 Daniele Valisena reviews the book Future Remains: A Cabinet of Curiosities for the Anthropocene, edited by Gregg Mitman, Marco Armiero and Robert Emmett (University of Chicago Press, 2018). If curiosity is insubordination, Future Remains elevates it to a key role in approaching – and hopefully changing – the “human epoch”.

“I don’t particularly like the term Anthropocene, but perhaps, with a little monkeywrenching it can be repurposed”.[1] The words of Daegan Miller (p. 147) pretty much summarize my feeling towards the term Anthropocene, which is at the core of Future Remains: A Cabinet of Curiosities for the Anthropocene, edited by Gregg Mitman, Marco Armiero, and Robert Emmett (University of Chicago Press, 2018). The volume is the result of a “slam”: an art and scholarly contest organized by the CHE – Center for Culture, History and Environment at University of Wisconsin-Madison in 2014, in collaboration with KTH – Environmental Humanities Laboratory and Rachel Carson Center. The book is conceived as an environmental humanities approach – and critic – to the Anthropocene, understood as a cultural, taxonomic, ecological, and political process. 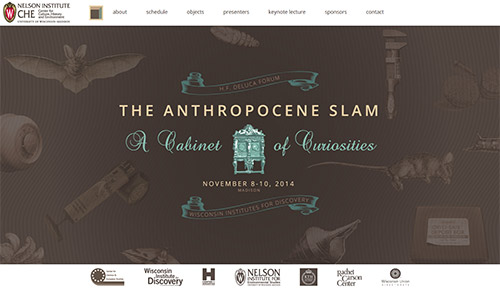 As the authors write in the introduction, the Anthropocene is a narrative about space and time (p. X), an ubiquitous syncretic time in which objects, scales, humans, living beings and non-human beings are all involved and exposed to. The book embarks into a critical challenge of a narrative that tends to obliterate differences and inequalities, as well as socio-ecological, racial, economic disparities and responsibilities. How? By monkeywrenching the core of the concept.

Against universalistic and de-politicizing analysis of climate change and the Anthropocene such as the one offered by Dipesh Chakrabarty in its Four Thesis (2009), the twenty-one essays that make Future Remains are all grounded in material objects. In their entwinement of matter, culture, memory, history, and moving geographical trajectories, objects can “bridge spaces and join times […] they can summon at once the past, the present, and the future, blending the global and the local, and thus they can disrupt linear narratives, such as the one of the Anthropocene” (p. xi).

Relational responses spur from material and emotional interaction with pollutants, geo-engineering interventions, de-extinction plans, everyday life experiences with coastal changes, or the simple ontology of a hand-pump filled with DDT herbicide. Those relationalities and stories, both common and intimate, empathetic and avversative, constitute the main thread across the 240 pages of the volume.

The objects, the stories, and the responses to the Anthropocene’s whimsical narrative are dissimilar and can lead to very different approaches and reasoning. As Marco Armiero writes, a political ecology perspective of the brief history of Titanic can mobilize mutiny as a way to sabotaging the Anthropocene unifying narrative. On a similar tone, skin color and the uneven geography of anthropocenic accountability and impairment are to be seen as one single process of primitive accumulation, as Laura Pulido reminds the reader. As Robert Nixon writes, “there is no transcendent “we” in the Anthropocene”. (p. 9).

Alongside with carbon dioxide and other pollutants that are spread daily and unevenly across the globe and contribute in sickening and poisoning human and non-human livelihoods, another seemingly naturalized casualty resulting from the Anthropocene is snarge. Snarge is a word invented in 2009 by a US ornithologist to indicate “the animal tissue that is left-over after a bird strike with a plane” (p. 81). As Gary Kroll writes, those hundreds of thousands of animal killings, which also include terrestrial fauna, are now an accepted consequence of the accelerated mobility facilitated by the ever-growing use of airplanes and automobiles.

Objects also embody, obliterate and/or reveal violence, such as the German calico described by Bethany Wiggins. The material history of the cotton, worked by enslaved black workers coming from Africa in the South of the Union, and the stories conveyed by such a simple handmade gift can be summoned to counteract and acknowledge the consumeristic and productivist ratio behind their global diffusion on both micro and global scale.

As Robert Emmet writes, objects are collectors of stories and “they are ubiquitous” (p. 166). Technological devices as a smartphone can be mobilized to reveal the inherent injustice of natural, economic, and human depredation that they concentrate in themselves both environmentally and politically. As Jared Farmer writes, “dead media are in fact undead […] in that they can outlive human time through their rare metal components. At the same time, those very metals result from a systematic spoliation of the Global South, especially Africa, so that the slogan “iPhone designed in California, assembled in China – could include an addendum, “extracted from Africa”” (p. 193).

The book also connects societal and systemic questioning to ethical and subjective responsibility through art and poetry, such as in the chapters by Sverker Sörlin, Rob Emmett, Trisha Carrol and Mandy Martin. Rachel Harkness, Cristian Simonetti, and Judith Winter have even created a play on the material and ecological relationalities of concrete, which “speaks” as from an interstitial techno-natural constituency.

Ruination and non-human temporalities are thus staged and problematized, although – as per quite a lot of environmental humanities works – there is sometimes a sort of agency gap between the aesthetic contemplation and the political activity and engagement which could result from the analysis of some scholars. One of the perilous tendencies of a certain strand of environmental humanities in fact is that the famous Donna Haraway invite to “being together with” (2010) can turn into a “contemplate whatever without doing anything”. To be clear, this is not the case with Future Remains.

Non-human voices – or to use Tom Van Dooren and Debora Rose words – and “storying” are also tackled by the chapters by Nils Hanwahr, Judit Hersko, and Juliane Warren. Nonetheless, animal studies, a growing strand of research within environmental humanities, is somehow under-represented in the book.

The material and more-than-human relational account presented in the edited volume powerfully tackles most of the key environmental, social, economic and political issues of the present time, be it called Anthropocene, Capitalocene (Moore, 2013), Teller-ocene (p. 48) or other terms from the plenty of words which have been coined to criticize the term proposed by Crutzen and Stoermer (2000). The genealogy of the Anthropocene, as well as the lack of ecological understanding of its historical developing is at the center of the analysis proposed by Gregg Mitman, while Rob Nixon evokes the power of storytelling against the technocratic hubris of hard sciences in dealing with present time environmental and social crises.

Such a vast and diverse approach inevitably leaves unanswered some of the critical questions relating to present-time socio-ecological inequalities. For instance, it is not clear whether some form of sustainability perspective or degrowth are part of the futures envisioned by the contributors. In addition, the book does not leave much space to non-western ontologies and forms of relationalities with the environment.

Nonetheless, the book constitutes one of the most effective contribution to the Anthropocene debate, politicizing it and bringing it back “on the ground”. If curiosity really is “insubordination in its purest form” (p. xii), the “lens of the world in its rupture times” (p. 206), Future Remains elevates insubordination to a key role in approaching – and hopefully changing – this “human new epoch”.

Daniele Valisena is a PhD Candidate at the Royal Institute of Technology within the Environmental Humanities Laboratory (EHL), at the Division of History of Science, Technology and Environment. His PhD program is part of the ITN – Marie Curie Network ENHANCE. He is working currently on his doctoral dissertation: Carbon lives. Italian migrants and coal metabolism. The case of Wallonia, Belgium.

[1] Degan Miller, On possibilities – or the moneky wrench, in Future Remains, p. 147