Heterotopias and a serious joke at IHE Delft library

'The Land Beneath Our Feet' – A Review 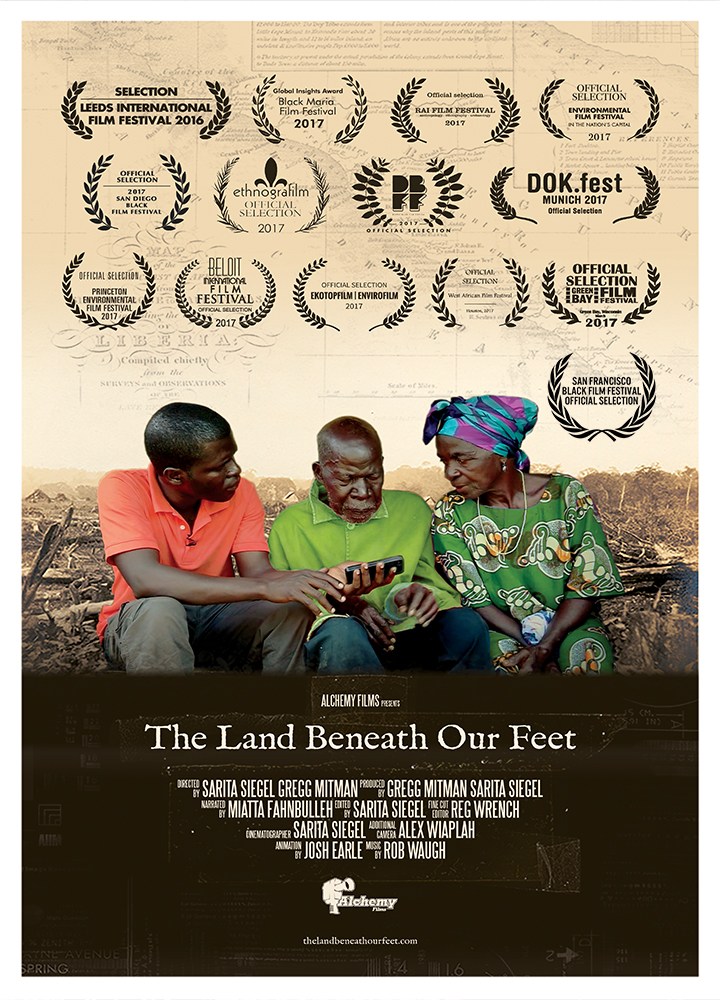 The critically-acclaimed documentary The Land Beneath Our Feet, produced by Gregg Mitman and Sarita Siegel (University of Wisconsin-Madison and Alchemy Films), is an in-depth ethnographic portrayal of processes of land grabbing and dispossession of rural communities in Liberia, which challenges the dominant narrative that depicts affected communities as passive victims.

Gregg Mitman, a History Professor at University of Wisconsin-Madison and Sarita Siegel a freelance film producer with Alchemy Films, teamed up to great effects to investigate, through an ethnographic research, processes of land grabbing and dispossession of rural communities in Liberia. The film follows a Liberian master’s student studying at the University of Wisconsin-Madison who returned to Liberia with an old footage of Liberia’s past. The uncovered footage depicted the Firestone Rubber Company 1926 corporate land grab, a reminder of how land rights had been eroded. Using the footage to initiate a national discussion on land grabbing, the film presents over four years of interviews with rural communities in Liberia and other key stakeholders.

The film was produced by Gregg Mitman (University of Wisconsin-Madison) and Sarita Siegel (Alchemy Films). It has been selected to, and received prizes in, several international film festivals. Source: San Francisco Black Film Festival

Following the discovery of a Harvard University expedition footage from a 1920s trip to Liberia, which coincided with a chance meeting with a Liberian student studying for his masters at University of Wisconsin-Madison, Gregg Mitman conceived the idea and designed the research project which formed the basis of this documentary.

The project’s attempt to ground its research work in the historical context of Liberia was evident from the opening scenes of the documentary, when pictures of Liberia’s first president and his wife were featured along with a narrative of the early arrival of freed black slaves from the United States (U.S.) in 1822. Continuous references are made throughout about the history of the arrival of freed slaves, their social, political and economic domination of indigenous Liberians and, how that contributed to the civil war which begun in 1989, with land being at the centre of it all. However, the passing mention of the activities that led to the acquisition of the first piece of colony land in 1822 by the settlers, supported by the United States Navy in what Neil Hahn referred to in his work as the first documented account of land grabbing in Liberia could have been examined in more detail and with more background information being provided.

Clearly the attempt was to portray the documentary as one driven by the voices of the locals, something a lot of previous and contemporary attempts at unpacking the impacts of land grabbing on rural communities in Liberia and elsewhere have failed to achieve. This is achieved in two ways. First, by enlisting the services of a Liberian (Emmanuel Urey) as the main character. Second, by documenting the narratives of over eight local communities affected by land grabbing in Liberia with the academic rigour employed, which provided the project with valid and reliable empirical data to support most of the narratives in their film.

The strategic trajectory of the land grabbing debate in recent years is suggested to have adopted a more colonial approach, where decisions on the tone and campaigns are decided exogenously in a kind of one-way internationalisation and then diffusing to local and national levels. In that light, the use of context-specific expert knowledge by Mitman and his team is another way that the documentary distinguishes itself from other attempts at de-colonialising the land grabbing phenomenon.

The documentary is more of an academic film than a media production and the use of local experts like renowned historian Professor Joseph Saye Guannu; 2006 Goldman Environmental Prize winner Silas Siakor; Philomeana Bloh Sayeh, Director of the Centre for National Documents and Records Agency; Dr Cecil T.O. Brandy, chair of the Liberia Land Authority; and Ali Kaba, a senior land researcher, all of whom are native Liberians, contributed to the potential decolonisation of the debate. Furthermore, in what can only be described as another attempt to cement the reliability and validity of the film, representatives from some of the concession companies were given the chance to add their voice to the narrative.

Michael Woods described globalisation as the ‘advanced interconnection and interdependence of localities around the world, reflecting the compression of time and space.’ (2005, pp33). Globalisation which includes capital, economies, politics, cultural, social among other factors, has brought new ways of doing things in localities across the world, including in Liberia. This is something that could have been utilised to provide further understand about land grabbing in Liberia. For example, the fact that we are talking about large scale land deals as land grabbing is as a result of the advanced interconnections between localities globally as a result of technological advancements within the framework of globalisation. Those advancements in technology has made the development of this documentary possible. That could have been given more attention. 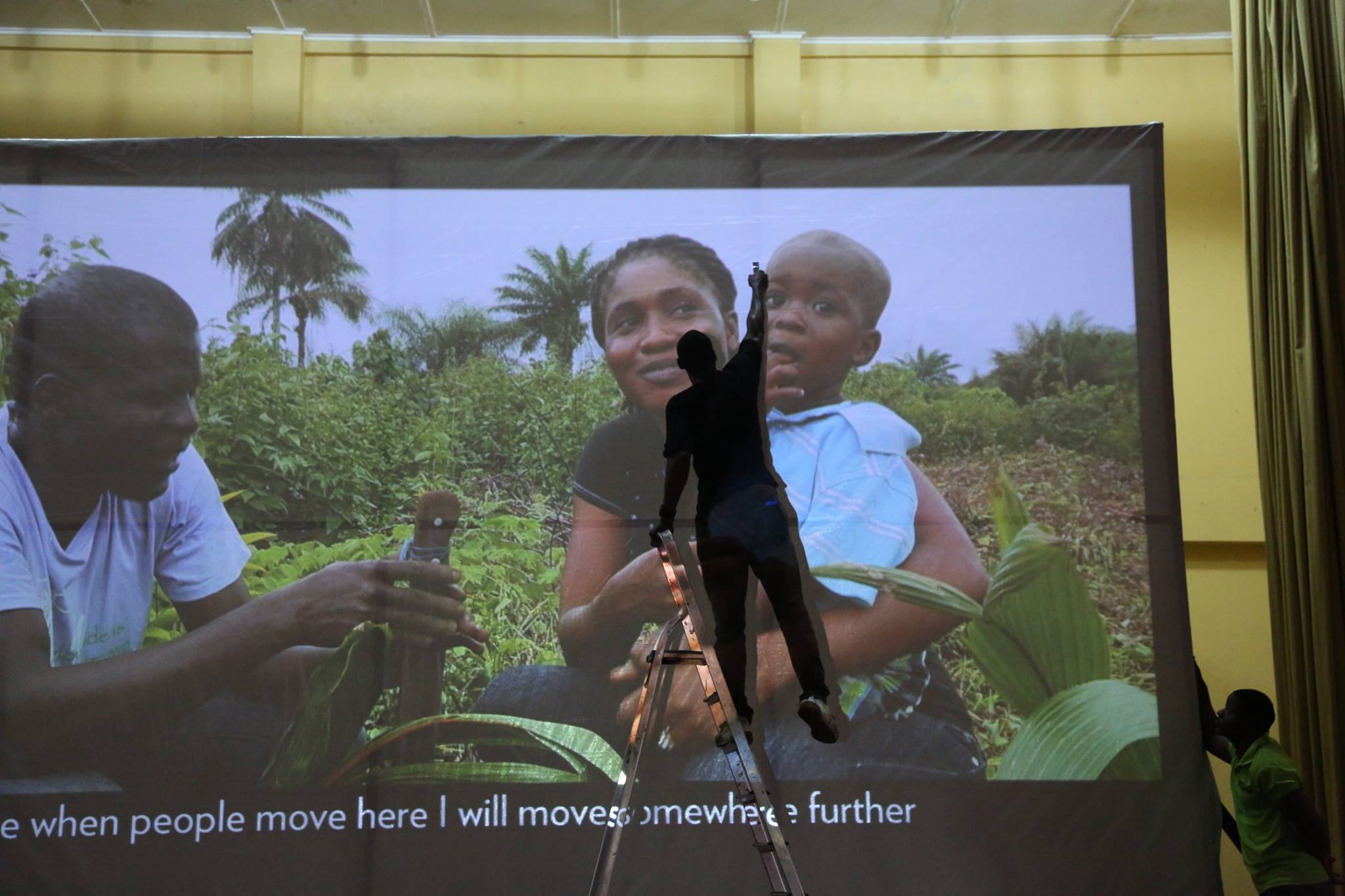 Picture of the presentation of the documentary in Monrovia, Liberia. Source: Gregg Mitman and Sarita Siegel.

The documentary was screened in communities in Liberia between 28th July 2017 and 4th August 2017 in five locations including three in rural parts of the country. This could be analysed under two separate conceptual lenses. The first is the ‘members check’ proposed by Lincoln and Guba in 1985. The essence of the ‘members check’ is to give research participants the opportunity to critique the findings and conclusions of the research in terms of whether or not the researchers’ interpretation represented what they actually meant. The second is about giving back to the research participants. Cindi Katz argued that it is inevitable that researchers will gain more in terms of their career advancements from the project. But, by going back to the participants and presenting them with the outcomes of their participation, it could give the participants some sense of benefiting from the project as well.

One of the major themes emanating from a political ecology conference which I recently attended in Oslo, Norway organised by the Political Ecology Network (POLLEN), was the trap that some political ecologist fell into, representing research subjects as experiencing the effects of a phenomenon homogenously. That is my main criticism of this documentary. Their presentation of the experiences of affected communities in Liberia suggested that all rural Liberians affected by land grabbing experienced the loss similarly. That cannot be entirely true. For example Knight and colleagues, reporting about their research experience in Liberia, suggested that women tended to be on the receiving end of discriminatory interpretations of land rights as belonging and social ties were redefined due to the squeeze on land as a result of corporate land grabbing. The documentary touched on the subject of the patriarchal process of inheriting land use rights within those rural spaces, but not so in terms of the everyday lived experiences of different individuals within those affected communities.

Overall, this documentary is of great value, as a point of departure, to researchers, educators, policy makers and rural development practitioners in sub-Saharan Africa and beyond. There is a lot to uncover – materials to reflect on in terms of evidence, concepts, power relations, local economic drivers and gendered concerns related to the process of land grabbing.

Fidel C.T. Budy is a PhD researcher with the European Research Council (ERC) funded Global-Rural Project within the Department of Geography and Earth Science at Aberystwyth University in Wales. His PhD research looks at the impact of land grabbing on rural Liberia through the globalisation lens.