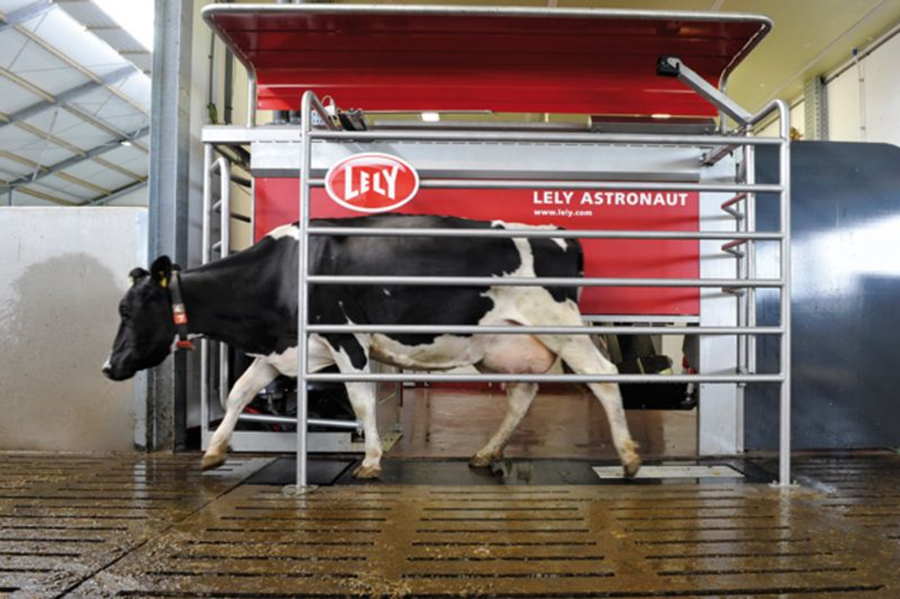 A political ecology of robots is due, one that is rigorously empirical, dedicated to justice and animal welfare, but unromantic in every regard.

I am standing amidst hundreds of milk cows in a vast dairy barn in central Wisconsin. In many ways, what I see reminds me of the dozens of other Concentrated Animal Feeding Operations (CAFOs) I have encountered over the years. The number of animals is overwhelming; rows upon rows of cows are munching away on feed and silage. The size of the animals, bred for explosive productivity, is incredible; each animal produces 23 thousand pounds of milk every year. The excrement from these animals is removed by machinery and funneled through sluices towards a perilously large nearby lagoon.

All of this is familiar to anyone who has spent time in rural Wisconsin, where the number of farms has fallen from 167 thousand to 9 thousand in the period since 1930, while production of milk has skyrocketed from eleven billion pounds annually to more than thirty billion. The shed I am in, with perhaps eight hundred milking head and run by a small single family, is actually tiny by regional standards. 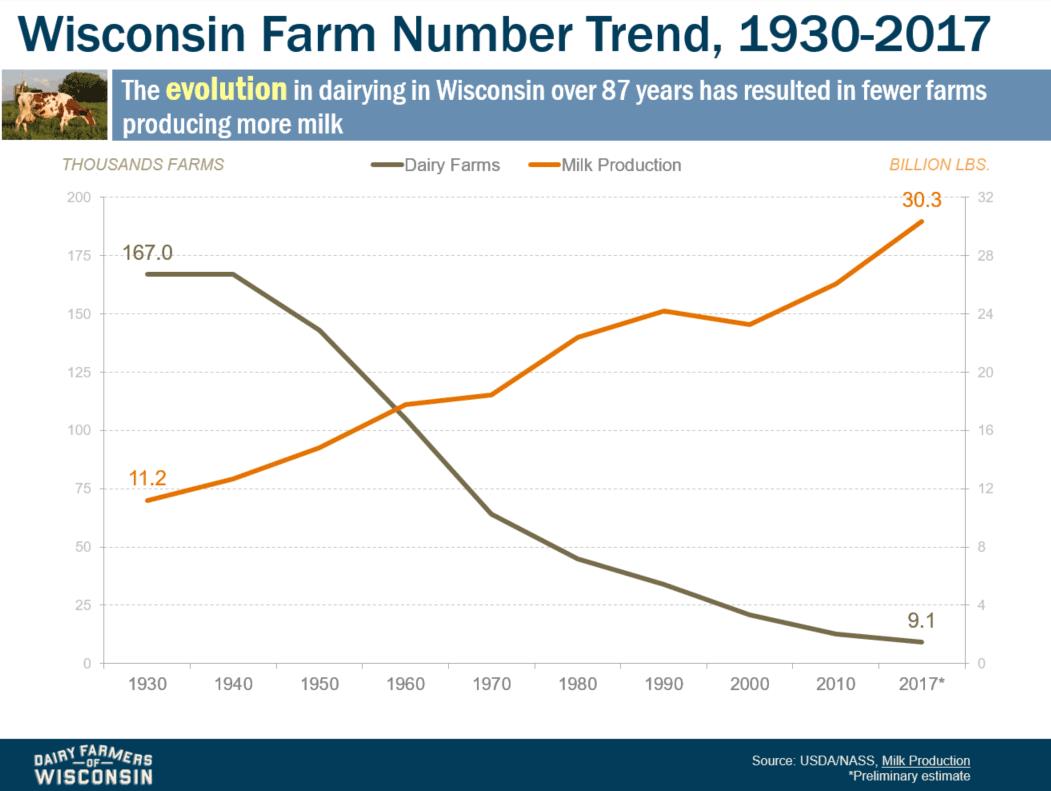 It is not difficult to mount a straightforward political ecological critique. The central cause of this race towards productivity comes from a crisis of overproduction. With more and more milk in constant circulation, prices have fallen, creating a treadmill of intensification. In the process, the human workforce is minimized. Given the high cost of labor (and the difficulty of finding anyone willing to do the backbreaking work), a mostly immigrant workforce has emerged in the sector: underpaid variable capital. This process, in turn, also undervalues the natural capital on which it stands, creating animal suffering and reckless nutrient overloading in the watershed in the form of cow feces loaded with nitrogen and phosphorus. Slam dunk: the second contradiction of capitalism.

Other things about the system are unfamiliar, however. First, there are no workers visible anywhere at all. The animals move freely around the interior space, queuing politely whenever they feel the need to for milking. At that point, robots do the work. Each giant red machine knows every animal and her unique physiology, and they relieve each cow until she steps away, making room for the next.

This is a surreal cyborg affair, but the animals are clearly experiencing less physical stress than their counterparts at dairies around the state. Equally, the owner tells me that this technological innovation has allowed him to maintain and raise wages for his very small remaining workforce and has freed time for him to see his grandchildren, and indeed spend more time attending to his cow. Rather than having to oversee an army of workers to march hundreds of animals to the milking parlor in the middle of the night in January, he can tend his animals directly.

Other technologies abound. The nutrient sludge from the dairy is actually funneled to a massive biodigester, which captures the methane and burns it to power the operation, which results in a significant net decrease in the farm’s carbon footprint. The liquid residue of this process is then applied to the dairy’s land, which produces the cow feed, all on site, in a closed agronomic loop. The owner tells me the farm’s soil quality has improved steadily since the machine was installed and his energy bills have evaporated; he no longer buys industrial fertilizer or power from the grid.

These facts do not obviate the need for political ecological critique, but they raise some questions that I simply cannot answer. Is there anything good about this Anthropocene dairy machine? Is it inherently evil precisely because it is a solution to the problems that capitalism has thrown in the path of this farmer? Are these kinds of technologies—or more radical uses of robot power in surgery, food service and sex work—only sensible in a contradiction-filled economy?

Put another way, in a just, democratic and sustainable ecosocialist future, will robots milk cows or will all production be on tiny family operations where humans toil at cows utters in the freezing cold at three in the morning. More radically, after the revolution will the cows simply be liberated and bring an end to milk? What does a good Anthropocene look like, does the road to that place run through an army of machines or do machines stand athwart the path, and what is the role of political ecology in charting the way there?

Clearly, we need to talk about robots.

Firstly, robots inevitably begin with the question of labor. The term robot itself, from the Slavic for worker (and in Czech implying forced labor), passed into common English parlance with the publication and performance of Czech playwright Karel Čapek’s 1921 play, R.U.R. (Rossumovi Univerzální Roboti—Rossum’s Universal Robots). In Čapek’s vision, robots are workers, but ultimately ones who rise up and murder their creators. Even so, from the very beginning the question has always been, do robots emancipate workers, replace them into poverty, or merely fill a gap where workers cannot? 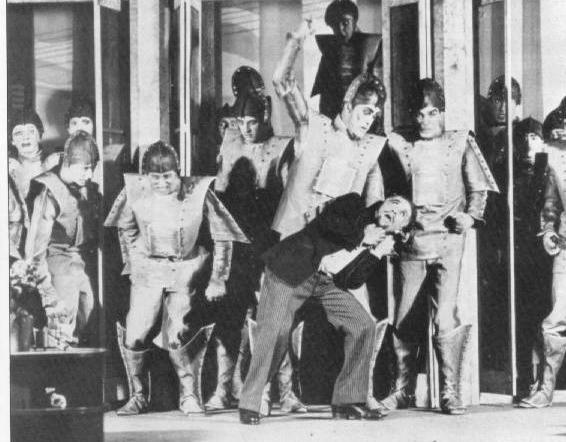 Those questions are quite abstract, and it would seem that each case might answer these questions differently. For our dairy farmer, it is clear that a key motivation rests is the rapidly declining availability of workers in the upper Midwest of the United States capable of, or interested on, milking cows. That sector has depended on migrant workers now for several decades, and even that work force is getting scarce, owing in part to right-wing anti-immigrant legislation/enforcement, but also the declining interest in agricultural labor even amongst new generations of migrants.

As the price of labor rises and its reliability falls, the front-loaded capital expenditures associated with dairy automation (each machine is roughly $200,000 US up front) look quite attractive to a producer operating with tight margins. It would seem, here at least, robots appear where workers vanish, and not the other way around. This may certainly not be the case in another industry or economic context, but it appears to be a complex dialectic.

A second battery of questions surrounds the experience of the worker/owner in the context of automation. Classically, robots are part of a sweep of automation that most critical observers associate with anomie and alienation. As “legitimate” labor—working with one’s hands—is offset by mechanization, it is imagined, the worker/owner is further alienated from production and the experience of making. Homo faber is ultimately reduced to tending infernal machines.

Such a perspective is congruent with a Heideggerian view of technics, which follows the urge to treat technology as “Standing Reserve”. That critique, while it has served a key role in rendering technology problematic, is not uncontentious. For Heidegger, after all, the technologies suspected most were not those of decentralized (and romanticized) agrarian life but always instead those of “sophisticated” modern industrialization. For Heidegger, the modern experience itself, less than the machines that embodied it, put humans at a reserve from more authentic experience.

For our dairy farmer, this question is complicated. As most have reported in the last few years, what farmers tend to appreciate about the machines is that they allow them to focus on their animals, rather than the human workforce. In other words, the long-term trend towards turning family dairy farmers into wage-paying, capitalist firm-owners has been, at least in part, reversed by the mechanization of the operation. It is now possible for the farmer to return to self-exploitation… or even peasantization, despite the incredible scaling of production. Moreover, when asked, farmers frequently respond that the affective relationship with their farm animals has improved through the rise of the robots.

What the animal’s experience might be is beyond our capacity to know. It is definitely the case, however, that the animals have increased autonomy and freedom of movement, less structured schedules, and lower stress, all resulting in higher yields. This may not compare to a pastoral ideal, but it certainly represents a radical change in trajectory from the massive and stressful milking parlors of past decades.

This case is only one, of course, in a world of automation, in which robots and artificial intelligence will play many contradictory roles. Capitalist firms will replace labor as best they can, of course, which might lead to immiseration and skewing of labor markets towards menial and service labor, although even there, robots are on the rise.

At the same time, however, this example hints at the way producers seeking autonomy, and even conviviality, may avail themselves of technical innovation. The specificities of the production system seem to matter a lot here, as do the aspirations of worker/owners in complex socio-ecological systems. To really understand robots, we would need to know a lot more about where they fit in emerging modes of production, as well as the experience of those who tend them and live alongside them.

What this means for political ecology is quite straightforward. A political ecology of robots is due, one that is rigorously empirical, dedicated to justice and animal welfare, but unromantic in every regard. It clearly would mobilize feminist theory, labor theory, and insights into affect and emotion, but it would also need to be impartial and careful; we really do not yet know what robots are doing to us yet, and answering the question will involve a number of material matters. These will include a firm grasp on the logistics of different kinds of production, a clear comprehension of energy and material flows, a deep understanding of finance in many sectors, and undoubtedly some rigorous partnerships with industrial and bio-engineers.

What this portends for social movements is less clear. Is there a role for robots in worker-owned factories in Argentina? Bicycle cooperatives in Barcelona?  New England Fisheries cooperatives? It is impossible to know before the fact.

But without experimenting with these innovations, we will never know, leaving the power of mechanization in the hands of monopoly capital, exactly where a progressive vision of the economy would least want to see it. We need to talk about robots.