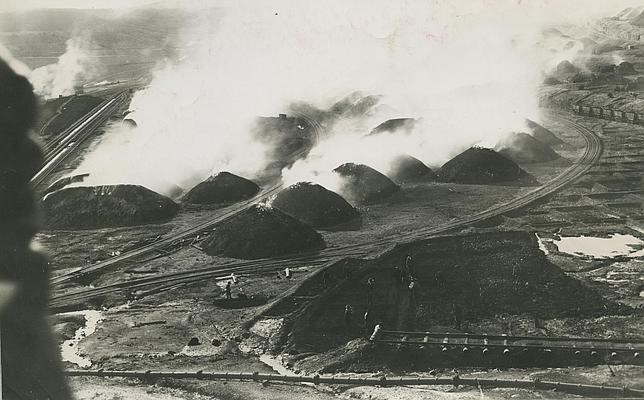 On February 4, 1888, a demonstration called by the “League Against Calcinations” to protest against acid rain ended up with a massacre of civilians by the Spanish army. Researchers Félix Talego and Juan Diego Pérez argue that the commemoration of this event is an opportunity to spread the message of social and environmental justice today.

“Down with the fumes,” shouted a crowd of some twelve thousand people who had gathered on the town hall square of Rio Tinto (Huelva, southern Spain), on February 4, 1888. It was a peaceful demonstration called by the “League Against Calcinations”. They were women, men, children, old people, peasants, miners, and local neighbours, accompanied by a music band. They came from all corners of the Huelva mining basin, which several writers called “the country of the Smokes”, and were organized in the “League Against Calcinations” and the incipient union organizations. They demanded improvements in working conditions and, simultaneously, the end of the acid rain (sulphur trioxide) caused by the open air calcination of pyrites on an unprecedented scale. The copper thus obtained nourished the worldwide demand of the expanding industry.

The peaceful protest, however, was met with harsh repression, and ended up in tragedy. Officially, the violence unleashed by the Spanish army caused thirteen deaths, although the actual numbers exceeded two hundred. The event, which made 1888 known as “The Year of the shootings” stands as the largest massacre of civilians in contemporary Europe during a period of peace.

The seriousness of the events led to an intense debate in the Spanish Parliament and great media coverage in the national and international press. It was the first media campaign on pollution in Spain, and one of the first in the world. And yet, no judicial or political responsibilities were derived. The crimes remained unpunished, falling into neglect.

The issue of fumes in the province of Huelva. Source: El Motín newspaper, October 16, 1887.

130 years after these events, we want to shed light on today’s relevance of the “Year of the Shootings” . The current significance of a past event is not determined chronologically, but whether its reasons and motivations are valid today.

We have previously mentioned that the protest was the result of an alliance of different actors alarmed by the deterioration of their health, their fields and their cattle. It is a grassroots, cross-class citizens’ movement, which explains why twelve thousand people came to Rio Tinto and joined what we now call an environmental justice movements. Therefore the “Year of the Shootings” constitutes an early example of what Joan Martínez Alier has called “popular environmentalism”.

And still, that tragic event has remained almost forgotten for a long century. The message of the 1888 “League Against Calcinations” disseminated through the bloodshed of miners, peasants and neighbours is a decisive historical fact. As it entered the kingdom of oblivion, it cleared the way for the almost uncontested dominance of multinational mining companies in the area, and of the large industry associated with the sulphur and copper that has been key to the Huelva industrial enclave: copper smelting, fertilizers, detergents, dyes, and later on refineries of petroleum, gas, etc.

This cuprous and chemical excess has been legitimized until today thanks to the hegemony of the theory of neoclassical economics — an ideology, which is sold to us as economic science and which José Manuel Naredo has so lucidly helped to challenge. It is the productivist worldview, which extended from the end of the nineteenth century to the left and the right of the political spectrum and made both sides blind and insensitive to the attacks on human health, the environment and the irreversible devastation of the landscape.

As other similar, later protests, the “League Against Calcinations” did not oppose mining but total domination by the mining industry, the complete subordination of a society to their demands without limit. They advocated mining on an appropriate scale to make it compatible with other activities, such as agriculture or livestock. Because today as then, mining continues to be, as Lewis Mumford called it, a “cut and run” activity, leaving a trail of devastated forests and soils.

That is why we have to keep asking ourselves today: How much mining? For what purpose? What will happen with the sulphur, arsenic, mercury, etc., which is extracted from the bottom of the earth? Because thanks to the intellectuals cited, we know that when it comes to mining, the less the telluric materials brought to the surface, the better.

The demand for environmental justice needs symbolic occasions, which spread this message, milestones that fix it in our memory. The celebration of 130th anniversary of the “Year of the Shootings” is a great occasion for it.

We are teachers and researchers, in contact with students who look out at the world full of curiosity, which encourages us to ask them, humbly, to study the appropriate scale of things, with the hope that they understand, as we understood one day, that the big is ugly and the small is beautiful.

Félix Talego and Juan Diego Pérez are professors of Social Anthropology and Economic History. This text is a slightly modified version of the text they read at the IV Jornadas Conmemorativas del Año de los Tiros, 4-6 febrero 2018, Huelva.