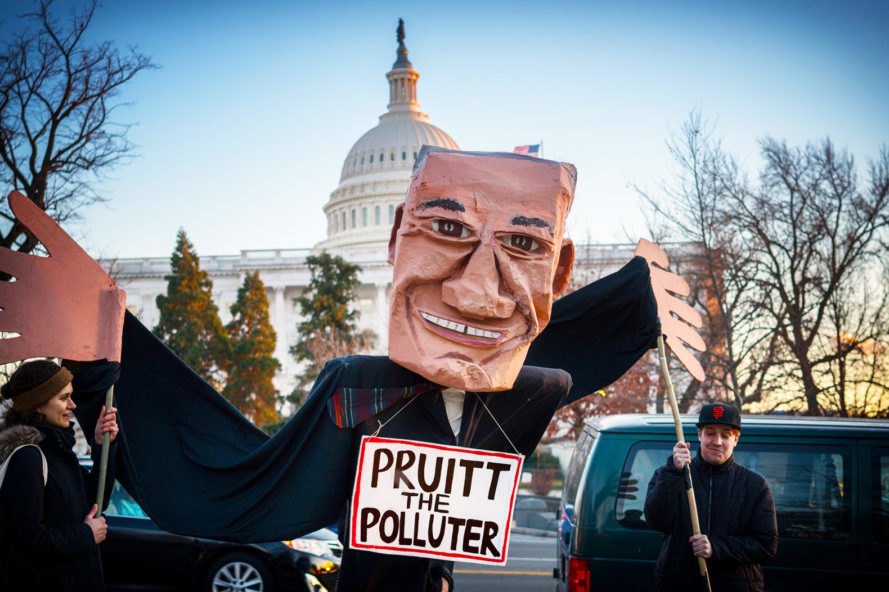 One year ago climate denier Scott Pruitt was appointed as the head of the Environmental Protection Agency, an agency Pruitt has sued numerous times and has promised to render toothless. (Source: inhabitat.com).

Current environmental policy textbooks are all stuck in a liberal narrative of environmental progress through political consent. But that era is over, and it has been for a while. What is missing from these narratives are concepts to explain now.

The book is in its ninth edition, covering up to Obama’s attempts to deal with climate change and the effect of his executive orders, which the authors describe as “the most far-reaching environmental policy changes since Richard Nixon.” According to Vig and Kraft there are and will continue to be “strong barriers to passing major climate legislation”, which they admit will be the case “even if an experienced Democrat like Hillary Clinton is elected President” in 2016.

What actually happened in 2016 has made this iconic book largely obsolete.

The problem is not that Vig and Kraft’s story is incorrect. It’s how they tell the story that needs substantial revision.  Their narrative is the march of environmental regulation as the rise of an environmental protection regime, a liberal progress narrative, which describes the rise of political consent to build governmental capacity to manage national environmental resources, particularly through the provision of greater protections against wily foes who try to exploit and degrade those resources.

Vig and Kraft do describe deregulatory administrations, for example the Bush Administration’s refusal to act on climate change despite court decisions. But the overall narrative describes a formulation and reformulation of policies to overcome barriers and obstacles through new strategies, which are more efficient or more acceptable to both the public and to the private sector.

There isn’t an environmental policy textbook out there that isn’t stuck in this progress narrative. But that era is over, and it has been for a while. In my class, I have to explain how and why.  Vig and Kraft won’t help me, not because their narrative is incorrect, in fact their book is stunningly accurate.  What is missing in their narrative are concepts to explain now.

Vig and Kraft’s analytical frame introduces only one concept to explain the obstacles to environmental progress: gridlock, that is, a stalemate due to disagreements between political parties and between Congress and the Executive. But gridlock as a concept is inadequate to explain what has happened to environmental policy, not just today but in recent decades.

One year ago climate denier Scott Pruitt was appointed as the head of the Environmental Protection Agency (EPA), an agency Pruitt has sued numerous times and has promised to render toothless. (Source: inhabitat.com).

The neoliberal era of environmental “governmentality” introduced systemic changes: public-private partnerships, dispersed governance and relocalization, tempered by attention to “stakeholders” and regulatory negotiation processes. But even the neoliberal regime of environmental governmentality is now on its deathbed, in part due to the rise of social media, which has torn away the veil of stakeholder civic engagement to show that, beneath the nativity play of neoliberal governmentality, the guys who show up at the negotiation table carrying gold and frankincense are really the ones in charge.

But the neoliberal nativity play of environmental protection was not entirely a Potemkin Village of false fronts hiding corporate control: the air had to look blue sometimes, the water had to be drinkable most of the time, and nations had to make some concessions to the global governance of climate. While not exactly achieving consensus, it was necessary to gain consent.

But we are now in an era of post-consent. At the end of their textbook, Vig and Kraft argue that “much of the pressure for policy reform will have to come from a more engaged public.” In fact, the public majority is currently massively engaged, calling, texting and tweeting their support for environmental protection.

This majority – quickly being disenfranchised by manipulations of voting and media – has been voicing their dissent to current moves to dismantle environmental protections, especially through the dismantling of the EPA. Instead, the current administration is playing to a minority crowd of global kings and local king-supporters, and the grassroot supporters of clean air, water and climate action are being ignored.

So, the challenge is not to explain to students a blip in the march of environmental progress but to explain why the neoliberal system — that relied on some sort of public engagement and consent — fell apart. Was there a counterpart to Earth Day, an event that led to this change of regimes? Yes, but that the event was political, an election, and not the slow-burning climate crisis that is lapping up against – and sometimes over – our shores.

So how might a political ecology approach explain our current environmental policies? Here are a few potential conceptual tools:

Scalar Warfare: In the neoliberal era, environmental protections increasingly became “multiscalar” and “joined up”: the public takes on some responsibility at the local level and the federal level supports them with subsidies, tax write-offs, or legislation that deregulates the federal rules. The Trump regime in fact dismantles the multiscalar system to pit the federal against the local, disallowing local tax write-offs, providing no federal support for taking on local responsibility, and representing local grassroots groups as dangerous radicals that need to be controlled, or at least ignored.

Deferential Populism: “Populism” has always been an ambiguous concept, especially now, when the word represents deferential support for an authoritarian strong-man government as “us” against them. But this is a different populism, which eschews voice and rejects engagement. Rather than the engaged crowds who filled the Mall at Obama’s Inauguration, we had the empty-Mall inauguration of Trump, a visible display of non-engagement.  The presentation of civic engagement as dangerous turns media thugs into protectors of the disengaged against civil society’s “voice.”

Gilded Governance: As many have noted, we have returned to governance controlled by Gilded Age elites, the golden gilding of Trump Towers representing those in charge. The neoliberal scramble to replace dismantled government social welfare policies with some sort of charitable non-profit sector have become targets of populist conspiracy theories, supporting scalar warfare and leaving the public with no trusted social welfare protections besides churches.

Re-veiling: The healthy civic discussion challenging science and the mainstream media for not living up to claims of objectivity have festered into a very different discussion that has made public institutions into a conspiracy target, delegitimizing science and public discourse altogether. Instead, civic knowledge comes through authoritarian statements of unsubstantiated fake facts.  The conspiracy narrative legitimizes the dismantling of support for educational institutions and government science agencies, particularly those which support environmental science research and policy.

Global Dealism: While abandoning the institutions of global governance, particularly the UN and global climate change agreements, Gilded Governance actors focus global connections on corporate deal-making.  In many cases, this involves lifting national protections on resources for the sake of making global trade deals, which sell these resources on the global market, while also opposing free trade policies. The opening-up of US natural gas resources to world trade is a prime example.

Clearly, we are only beginning to understand this new era. More analysis will be needed to understand the fate of the world’s resources in the hands of this new regime.  Will environmental protections die completely under the forces described above?  Or will a new crisis, natural or political — or combined — lead to a new system?

Stay tuned. Either way, we need environmental policy textbooks to go beyond the liberal narrative and use new frameworks that explain what is happening today.

E. Melanie DuPuis is an environmental sociologist who studies politics, governance and social movements around food, environment and sustainability. She is also Professor and Chair of Environmental Studies and Science at Pace University and has authored and edited a number of books, including Nature’s Perfect Food, Alternative Food Networks, and Smoke and Mirrors: The Politics and Culture of Air Pollution, and Food Across Borders.  Her newest book, Dangerous Digestion, looks at the history of American dietary advice as a mirror of the political ideas – and tensions – in American society.