The Damage Done and the Dams to Come 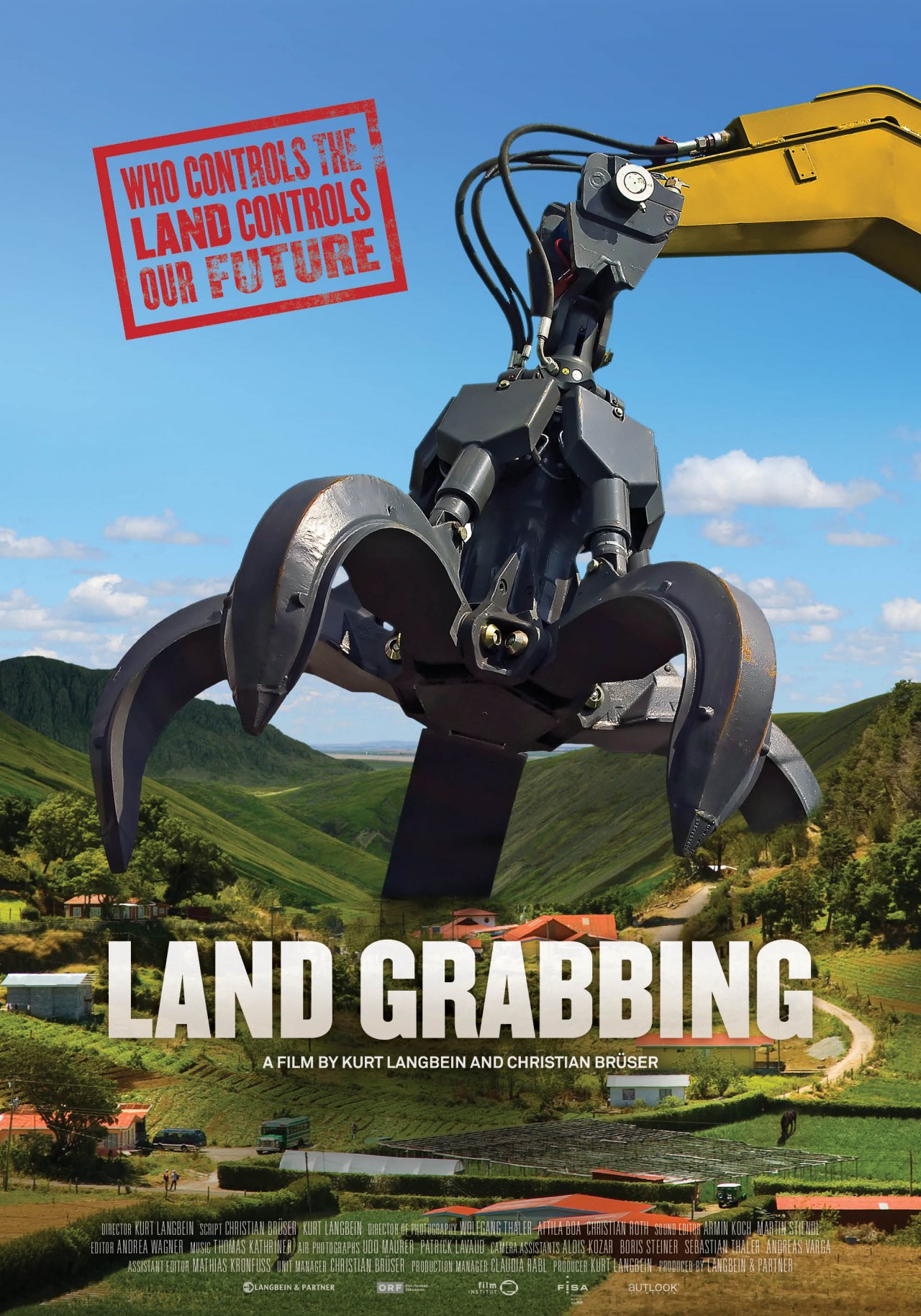 Land Grabbing by Kurt Langbein offers a razor sharp visualization of the tremendous drivers and tragic dramas of mega investments in land.

The documentary Land Grabbing (Landraub) by Kurt Langbein is in cinemas across Europe this autumn and winter. The rush for land took off years ago, with the food and fuel price hikes of 2008. Perhaps the topic of land grabbing has been somewhat over-reported in academia and media in recent years, but Land Grabbing is definitely worth a watch.

The documentary is on top of the most current events concerning land grabbing—and the photography of the film is breathtaking. The ferocious visual and analytical account of the ecological insanity of large-scale palm oil production in Indonesia—to use just one example from the film—comes timely. Vast swathes of Indonesia’s forests have been burning to the ground over the last months, while illegally planted palm saplings are already growing fast on the burnt forestlands.

As the camera work projects striking images of social and environmental injustice, the film does well to avoid excessive fault-finding narration and sweeping agitprop condemnation of big foreign investors and national political elites who evict farming populations from their land.

Instead, the pictures and protagonists of Land Grabbing speak for themselves. Unlike many popular media accounts, this film gives voice to the many different faces involved in the global land grabs—small, middle and large farmers, local and international activists, politicians, investors, financiers and speculators. It also pays particular attention to the many different ways in which small farmers loose their land.

How land is lost

The country the film starts with, Cambodia, is a striking example of how both the state and agribusiness use sheer violence to dispossess and displace rural villagers from their farmland to make space for massive mechanized sugar plantations.

This is a classical example of the tragic irony of primitive accumulation and proletarianisation—villagers are turned into landless peasants working as wage labourers for the investors, on the land they once owned themselves.

The film also shows that it is primarily the European Union’s (EU) “Everything but Arms” trading initiative which lowers Cambodia’s barriers to trade with the EU as well as it leads to a bittersweet rush to produce sugar for export to Europe.

The impressive photography of huge investment schemes for wheat production in Romania’s Banat region immediately dismisses the naive idea that land grabbing only takes place in the Global South. Land grabbing is a European problem too.

Romania exemplifies post-socialist countries where previously collectivized lands are still being privatized and concentrated into the hands of monopoly investors. Foreign investors backed by financiers are prioritized over middle-size Romanian farmers—via non-transparent land-bidding processes in Romania as well as “EU policies that don’t support farmers but hectares”, as the German Green Party MEP Martin Häusling puts it in the film.

The result is that Romanian farmers are compelled to compete with foreign investors and are driven out of business if they fail to expand the scale of production. This further aggravates already rampant post-socialist rural decay in Romania. 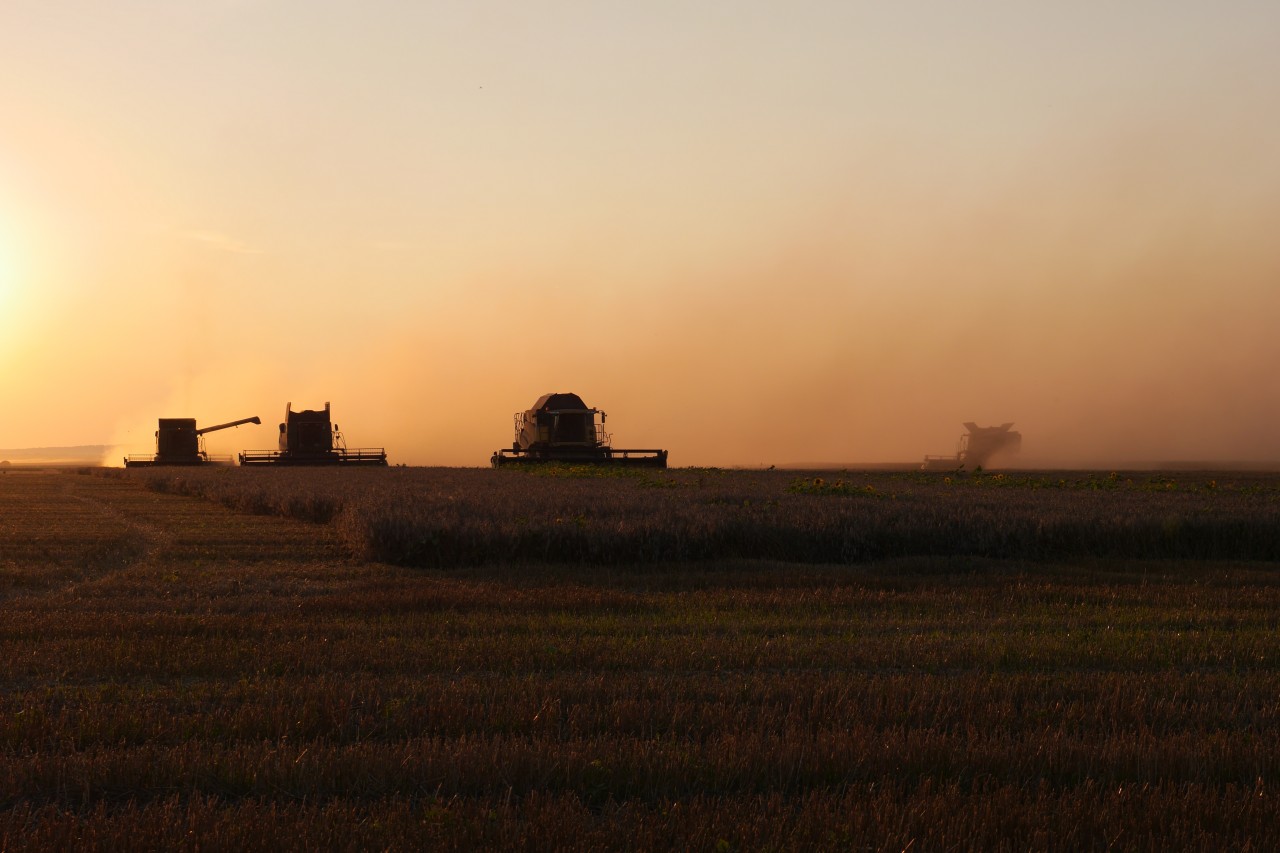 Even without immediate violence, the Makeni Project by Addax in Sierra Leone is an example of how investors can in some cases directly engage farmers into manipulative contracts that cause the farmers to loose their land over longer periods of time. The ecological impacts of the Addax bio-ethanol production project, additionally, deprives neighbouring farming communities of clean water supply for their households and farmlands.

Addax claims its legitimacy for being a sustainable, integrative and bottom-up development scheme. Yet, by offering unclear contracts to farmers who are represented by an unwary village-chief, and unstable jobs, which only some members of the community get access to, Addax unleashes a slow violence that over time undermines the social fabric of Makeni’s community.

These practices turn neighbour against neighbour, instead of farmers against investor. It is a “big big problem”, says a Makeni village-chief, who realized far too late that he was tricked into selling out his community’s land. “If we don’t get our land back, we have no future here … we will stop them and make them talk to us”, he says.

How land is won back

While the sense of hopelessness in the film is strong at times, so too are the examples of resistance against land grabbing and struggles to reoccupy land. One of the most impressive protagonists of the film is Venerable Sovath, a Cambodian Monk fighting against forced evictions and supporting landless farmers in their struggles to regain their land.

The film follows how Venerable Sovath uses his camera and film material to document the social injustices of illegal land evictions. His activism, however, is not without danger, as he lives under constant surveillance and threats from the state. 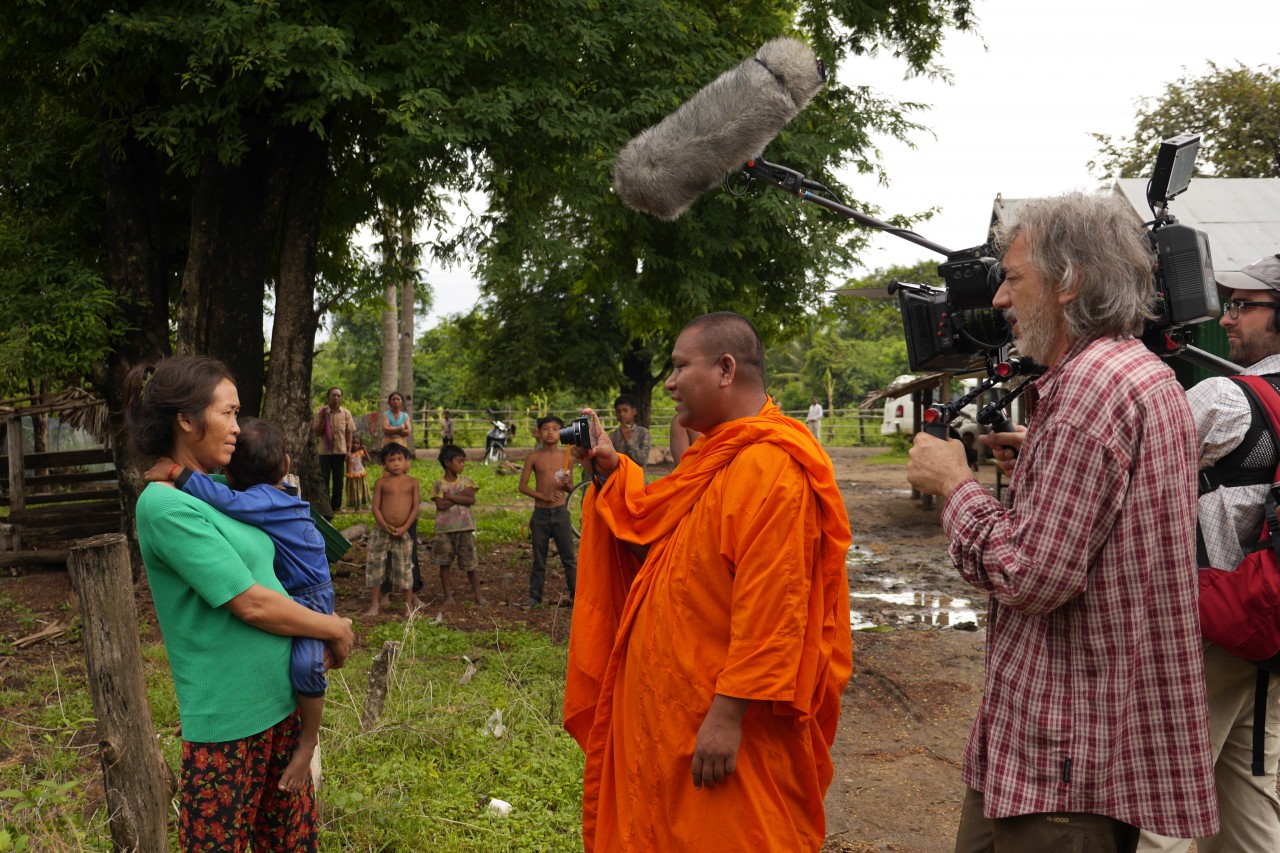 As a side note, it is sometimes neglected by foreign documentary film makers that although they raise very necessary awareness, their portrayal of local activists can also back-fire. By putting local activists into the media spot-light, they expose the activists to political dangers.

Another documentary on land grabbing—Dead Donkeys Fear No Hyenas by Joakim Demmer, set to be released in 2016—has already amplified political attention in Ethiopia on the environmental activist Omot Agwa, who features in the film. Last month, Omot was arrested for attempting to attend a conference on food security issues and now faces charges under Ethiopia’s anti-terrorism laws. It remains to be seen if the film will gain enough international attention to put sufficient pressure on the Ethiopian government to release Omot.

Back to Land Grabbing, Ethiopia also plays a (double) role in this film. First, it is used to show perverse socio-economic inequalities related to how vegetables produced by exploited wage workers in massive green houses one day, are consumed by the super-rich in one of Dubai’s Burj Al Arab restaurants the next day. Second, small-scale agro-ecological farming practices for food sovereignty in Ethiopia’s Tigray highlands are celebrated as an alternative to the craze for ‘food security’ based on large-scale industrial agriculture.

Food sovereignty as a political concept and agro-ecology as a farming practice do indeed need to be taken seriously as a way for farming populations across the globe to autonomously control their own cultures, practices and distribution systems of food production and consumption, rather than conventional measures to satisfy basic food security needs. I am however skeptical of the example of agro-ecology used in the film Land Grabbing.

I visited the research site of a colleague in the Tigray highlands just last month and saw that even with governmental support these farmers are currently facing a very serious struggle to survive droughts, as El Niño has striken Ethiopia and has made rainfall patterns highly unreliable. This is just to say that in Ethiopia agro-ecology has a long way to go, if is is to rival large-scale agro-industrial production in the lowlands—which is by far the state’s preferred strategy for agricultural transformation. 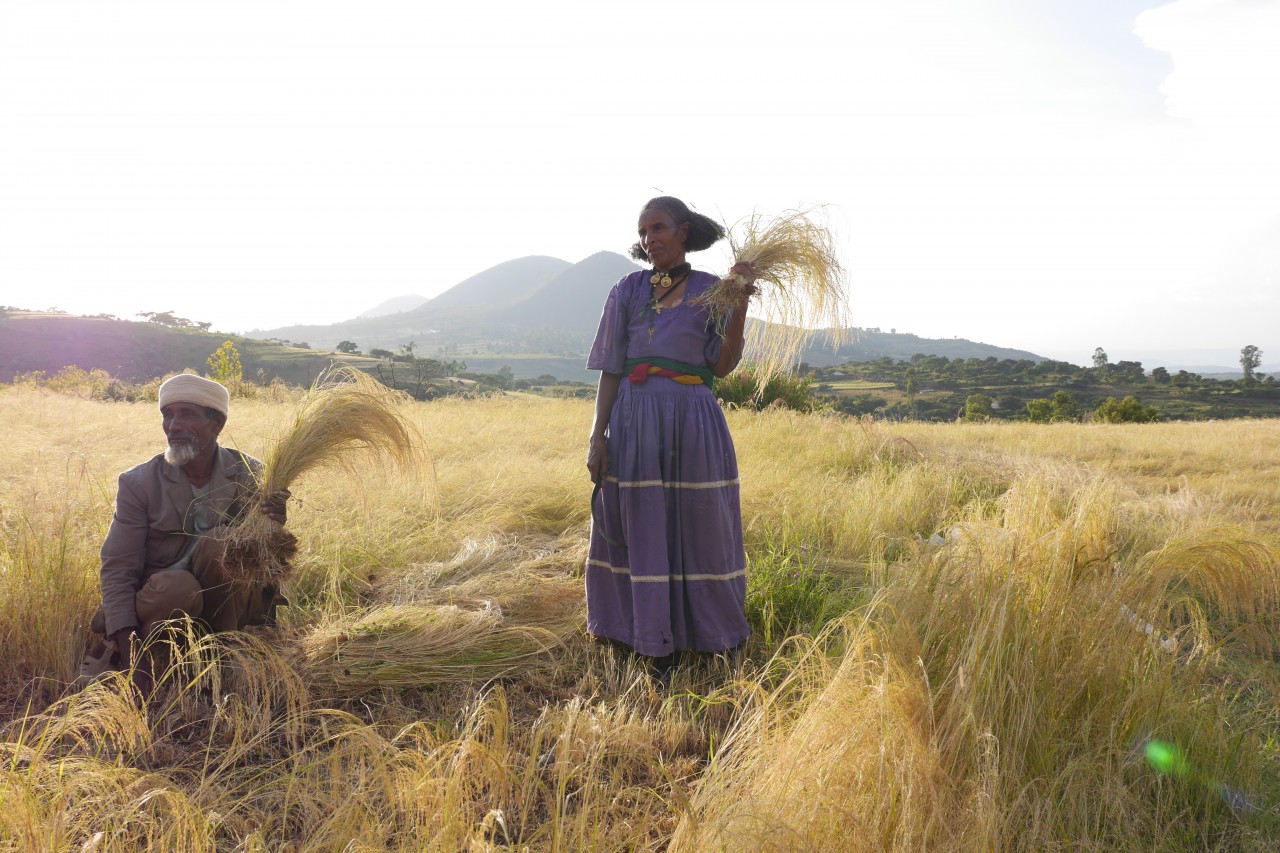 One of the main points which the director Kurt Langbein tries to get across in his film is that local political struggles for indigenous rights and responsible agricultural investments need to be scaled-up to higher levels—namely, to governance bodies like the EU or international financial institutions. These are political arenas which may often seem to exist somewhere up there ‘in the air’, although they are actually at the interface of politics on ‘the ground’.

Interviewed about his film, Kurt Langbein said that with Land Grabbing he wants “to show Europeans what is happening with their money, and in their name”. It is also a great way to get his audiences to first think hard about ways to engage with political struggles ‘from below’ and influence formal politics ‘from above’, rather than to unleash either a hysterical helper syndrome or absolute cynical neglect—both of which are tendencies that seem to be so very common in Europe today. 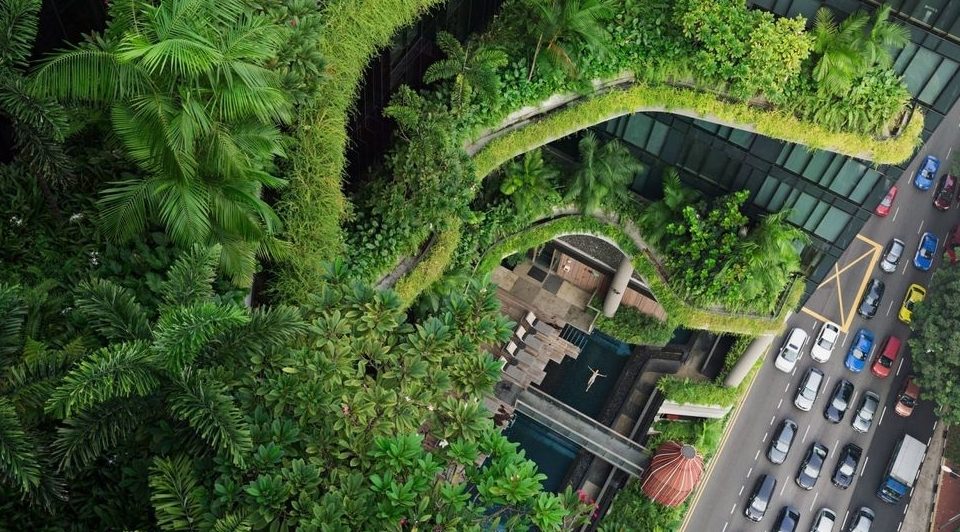