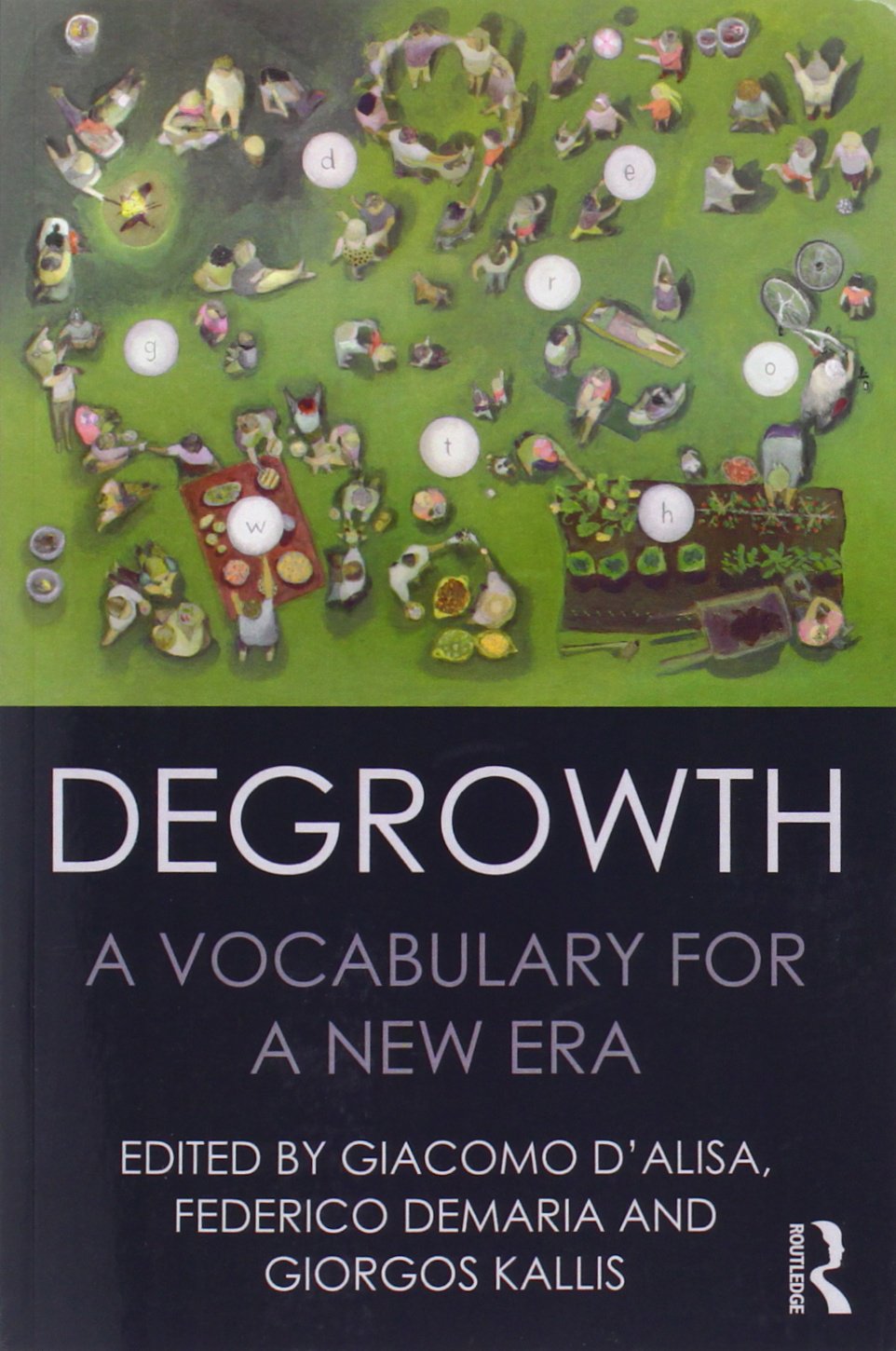 When the language in use is inadequate to articulate what begs to be articulated, then it is time for a new vocabulary.

Quote from ‘Degrowth – A vocabulary for a new era’

“Degrowth – A vocabulary of a new era” is the first English language book to describe and explain the lines of thought in degrowth, as well as to present alternative to growth imaginaries and bring together existing courses of (degrowth) action. Concepts such as “anti-utilitarianism”, “environmental justice”, “care”, “commons” and “conviviality” are, according to the editors,  not only key theoretical ideas in the book, but also elements of a degrowth society. The theoretical roots of these ideas trace back to the post-Marxist ecosocialism of Gorz, Castoriadis and Ellul, in the work of of Illich, Polanyi and Bookchin, in Arendt’s political philosophy and in Latouche’s critique of development.

The “vocabulary of a new era” is above all a dialogue about ecology today. This dialogue is compelling particularly because it is being held in a suffocating context. On the one hand, the current period shows that crises, both social and “natural”, are themselves the result of capitalism’s insatiable quest for accumulation, as it harnesses these crises to fuel its expansion. On the other hand, this same period requires that radical political ventures integrate the ecological dimension at the heart of their political praxis. Therefore, this book should be read as a canvas of studies, approaches and proposals which serve the common objective of creating radically different societies, geographies and patterns of production/consumption. This publication paves the way towards creating and continually developing a new analytical space for radical ecological thinking.

What are the main axes of this new analytical space?

The first one is the crucial issue of strategy. The book raises specific political demands, claims and suggestions for economy, social life, and ecology, at the same time it feeding theory and carving new strategic choices for radical ecology. A unifying line of all contributions is the claim that by focusing on the needs of the many and on active participation, the socioecological transformation of production is possible. In this framework the book proposes a new “geography of tools, methods and concepts” which is radically different from green capitalism and market environmentalism.

Capitalism and markets deal with nature, environment and ecological balance as a cost that needs to be paid (or not!) by capital. Drawing from examples of capitalism’s interface with forests, wastes and mining, we can easily document its expansion deeper into ‘nature’, spawning new forms of enclosures and new modes of realising higher profits. We can also clearly see the new socio-environmental crises and disasters that it generates. Take for example the case of the “economic miracles” of Latin American countries during the 90s and 80s, the expansion of extractive activities in Africa or the attempts to overcome “commodity frontiers” in Southern Europe during the crisis period. On the radically different (and foreseeably anticapitalistic) basis that the book stands on, environment is the core of a new project that is the social transformation of production and the economy of needs.

The second axis has to do with the “period-framework” of modern capitalism. In a previous period, neoliberalism seemed invincible and capitalism the end of history. Is this still  an unquestionable strategy? One can argue that despite profound protests the set of recipes to restore the existing financial-economic order was not at all challenged. This is true, but these very protests and movements have managed a significant change which is even more important: They are keeping democracy and “the political” alive. In the early 21th century the anti-globalization movement, the occupy movements around European cities, the Arab Spring and the many outbreaks of political upheaval in Latin America, put the foundation of capitalism under question.

The current manifold crisis relates to the unsustainability of the post-war consumption-based economic model, as well as to the exclusion of individuals, whole countries, or even continents from it. There is, therefore, need for diverse but radical political and economic actors to abandon their usual positions and radically question the present situation. In this new context, the radical ecological thinking and practice (and of course degrowth itself) has and still is playing a catalytic role: It unifies movements and struggles that before seemed isolated and local (see for example the different movements that today are consolidated under the umbrella against climate change), while creating a political framework where ecology is not a side issue but the core of anticapitalist politics.

Lastly, it is worth stressing the book’s stance on the production of new scientific knowledge. The vocabulary is important because it manifests the great breadth of concerns and proposals put forward by degrowth thinkers and actors through their involvement in many areas (arts, science, activism). Their work of developing imaginaries and concrete practices that are alternative to productivism, both locally and globally, takes place within and outside of major knowledge producing institutions. At a time when the world’s top institutions are working like gated communities with very high fees and private funding sources, this publication demonstrates the need for new public and open institutions (dmainly universities) that work together with (and not just for) social movements and activism. It is not by chance that the degrowth vocabulary includes terms, words and a new value framework that comes directly from social struggles.

Is degrowth the vocabulary of a new era? Its theoretical references and final claims can certainly be debated. Surely, however, this book encapsulates the questions of a new era and the main ways to answer them. It calls us to study it carefully and face up with the challenges posed.