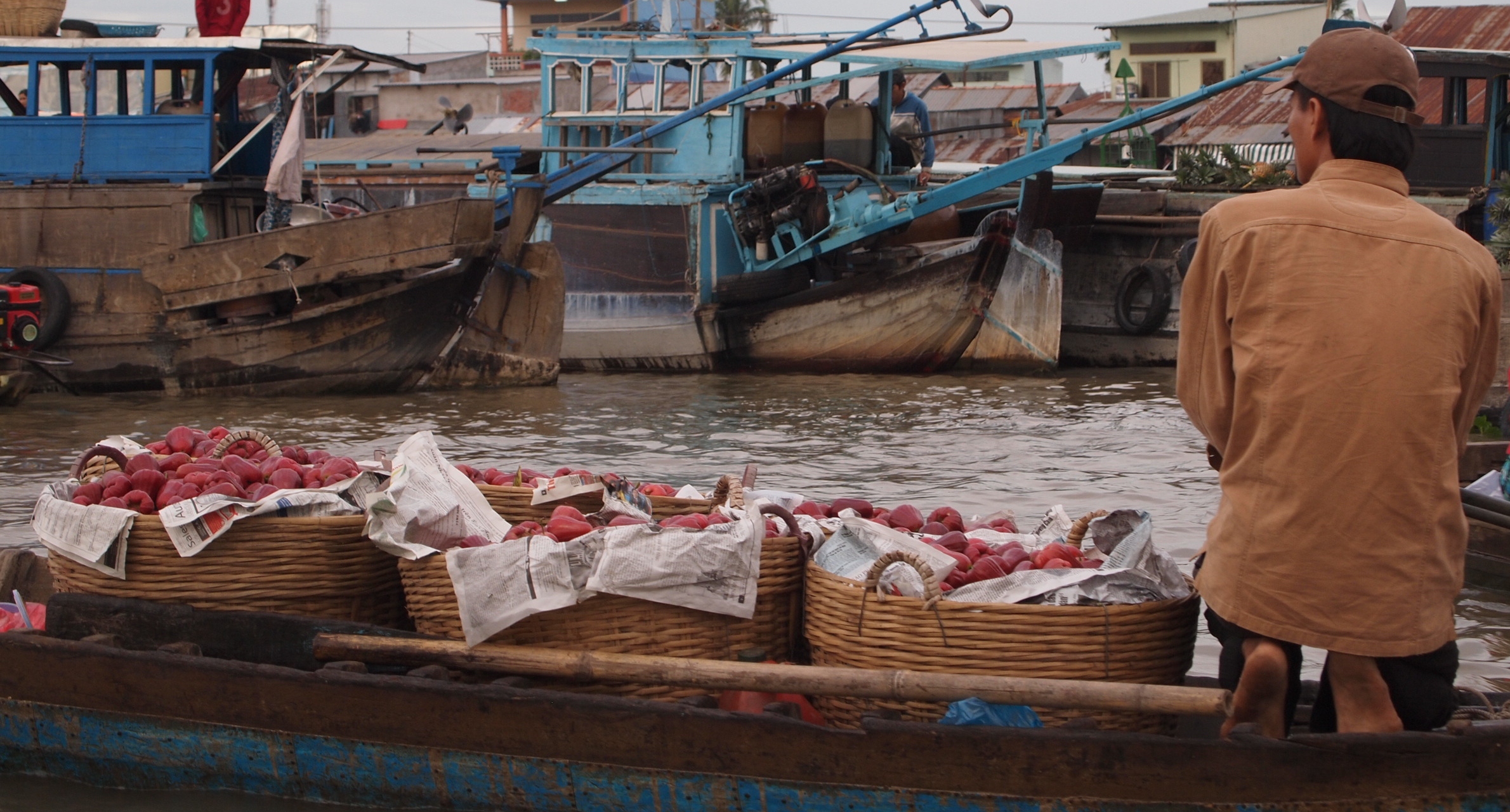 Fruit vendor in the “floating river market” in the Mekong Delta of Vietnam. Source: the author, 2011.

About a year ago, journalist Rose George gave a TED-talk about sanitation and diarrhoea in which she invited people to “talk crap, seriously” and got almost 1.5 million views. Today, after four years of researching this topic, I realize we need to question George’s speech. It is indeed a frustrating reality that she is drawing attention to: “diarrheal disease kills more children than AIDS, tuberculosis and measles disease do, together”. This is happening despite the fact that there exist ways to prevent and treat this disease and the global health community is well aware of them (see for example this booklet by UNICEF and WHO).

Even though the discussion opened by George is certainly important, many empirical studies (including my own) have shown that abolishing open defecation is not synonymous to eradicating diarrheal diseases. Construction of more toilet facilities is not necessarily going to help people develop healthy behaviours. In order to promote any kind of change, we need to consider and respect the realities and histories in which people’s knowledge(s) -about their bodies, their health and their environment- are situated. In illustrating this argument, I will draw on three points.

In the video above, George talks about toilets as a privilege to those in a position to attain it. Throughout her talk she draws an implicit line between sanitized and non-sanitized places, which is parallel – if not coincidental- with the line between rich and poor countries. Without wanting to disregard the global injustice in how wealth and poverty is distributed geographically, I would ask what defines vulnerable versus powerful, exposed versus protected, and wealthy versus poor people within such countries?

One of the arguments that emerge from George’s talk is that sanitation and health are principally matters which can be resolved by speeding up along a pre-defined road to development – with people discovering what the “wonderful Victorian engineers” discovered, and being convinced to build and use the flush latrine.

Findings from Vietnam, where I conducted my research, show how these types of approaches often fail to achieve their proclaimed public health goals. Vietnam officially exited poverty in the 1990s and has shown sustained economic growth ever since. However, there are still 1.5 million documented annual cases of acute diarrhoea, over the last decade; a figure not far from what was noted before the country’s economic upheaval of the 1990s. And this despite statistics that report a sharp rise in the percentage of people with access to improved water and sanitation. So, why hasn’t development prevented more people from getting sick?

A bust of Ho Chi Minh, the Vietnamese flag and the stick of a local officer placed on his desk in an urban commune of the Mekong Delta. Source: the author, 2011.

Access to resources and services are affected by power relations, which manifest in class, gender and ethnic inequalities. Judging by George’s work (see for example her book chapter on scavengers in India), she is more aware of the political nature of disease than her TED-self allows us to see. While she talks about the need to overcome the shame of talking about shit and about latrines, she does not discuss the need to question the socio-political systems that disallow free access to safe water and sanitation, nor the governments that disregard minorities and the bureaucracies that prioritise their own institutional power over public (health) concerns. (On losing the fear to open those kinds of questions, see this post by Erik Swyngedouw).

Comparing world budgets, George is pointing to sanitation as a comparatively under-funded sector in the global water and sanitation budget. This is irrational, according to her, because clean water is not enough to prevent disease occurrence, while good sanitation would. However, one needs to point out that clean water access is also still a desired future and not a lived reality for namely 780 million people in the world (for more detailed accounts, see the GLASS report 2012).

Living in a floating boathouse includes collecting surface river water and storing it for future drinking or daily use. Source: the author, 2011.

On the one hand, intra-household water contamination and digestion of diarrheal pathogens is more associated to people’s hygienic practices (manner of collecting and storing water, water treatment in the household, preparing food, cleaning utensils, washing hands), than the presence or absence of latrine. On the other hand, latrines without adequate collection and treatment systems do not help towards environmental sanitation. In the example of the Mekong Delta, many households simply redirect their sewage from their flush latrines into the river.

Point #3: Persuading is neither empowering nor sustainable

Whereas George admits to the social complexities of changing sanitation habits, she hints merely to the need for persuasion. “The idea is to manipulate human emotion”, she says. “It’s been done for decades. The soap companies did it in the early 20th century. They tried selling soap as healthy. No one bought it. They tried selling it as sexy. Everyone bought it”. In other words, let the educated and hygienic us, show them how to be clean and sanitary using the flush latrine.

The saying “old habits die hard” exists also in Vietnam (Đánh chết cái nết không chừa) and was often used by local officials to justify people’s use of contaminated water, open defecation and the incidence of disease itself. Indeed, much of the health education campaigns prioritise modes of persuasion, using feelings of shame, fear and guilt, without offering a relevant framework upon which local people can evolve their understanding of disease-causing factors and preventive measures.

But, in Vietnam there is also the saying, “she that knows nothing, doubts nothing” (Điếc không sợ sung). If one cannot understand the sources and cycles of local water pollution, they will not question why governments are reluctant to move towards wastewater treatment regulations. If one is also not aware of the safe way to construct and use low-cost household systems of water treatment or sanitation, they will not question the lack of such alternatives in official policies and discourse. Truly participatory, inclusive and contextualized health education is a tool of empowerment for communities and individuals.

A fishpond toilet over the water made of by bamboo sticks and metal scraps. One has to balance on the bamboo “bridge” to be able to use the toilet. Source: Dunja Krause, 2012.

If I hadn’t experienced some of the nuances behind the striking facts and numbers that George presents, I would have come out of her talk feeling upset. But the premise of my frustration would have been focused on the question of ‘why can’t we convince people to invest in, build, and use toilets’, and thus it would be a largely misplaced criticism. The message missing in discourses like George’s is that in a world of fast-paced and diverse socio-ecological change, health challenges need to be addressed through equally diverse and engaging ways of assimilating new knowledge into already existing systems of understanding.

The result of this work is a monograph entitled “Socio-political and Cultural Determinants of Diarrheal Disease in the Mekong Delta. From Discourse to Incidence”.