Unsettling (water) scarcity one raindrop at the time: Learning from the Revitalised Rainfed Agriculture Network in India

Rainfed areas of India, where agriculture is reliant on seasonal rainfall, are often associated with drought-prone territories characterised by endemic water scarcity to be fixed by expanding irrigation. Tracing the historical roots beneath these naturalised scarcity framings, Arianna Tozzi discusses how the work of a grassroot network provides a space to reimagine an alternative paradigm for rainfed regions that values their diversity and variability.

Over the past year I have been engaging with the Revitalised Rainfed Agriculture (RRA) Network – an Indian-based group of civil society organisations, researchers, practitioners working to create prosperous and resilient alternatives for rainfed regions of India. Their goal is to challenge the productivity oriented paradigm driving water and agriculture policies and give space to situated understandings of rainfed agrarian environments informed by what is happening on the ground. Policy, they argue, should reverse its gaze and learn from the activities, experiences, values, and relations of people living in these rainfed regions.

Despite contributing to over half of the cropped area of the country where the majority of nutritional food crops including millets, pulses and oilseeds are cultivated, these regions’ tremendous socio-ecological significance has been made invisible by policies privileging a irrigated model of commercial agriculture. It is in this context that guided by a vision of engendering social and environmental transformations, the Network uses grassroot-level mobilisation and action research to show policymakers a path for revitalised rainfed agrarian environments.

The roots of scarcity ideas in rainfed regions

At the heart of the Network’s objective is a call to redress the historical injustices perpetrated against rainfed regions, the roots of which – as I discussed elsewhere –  reach deep into colonial ways of partitioning and classifying the landscape. The very definition of rainfed areas adopted by public policy today (areas where secure irrigation is limited to less than 40% of the cropped area) follows a principle first identified during British colonial time. Driven by concerns over the recurrent famines that marked the establishment of the British Raj, this definition demarcated areas deemed to be ‘protected’ from famines by perennial irrigation from ‘unprotected’ regions prone to droughts and scarcities. Following a classificatory logic that ranked territories according to the share of dependable supplies of irrigation, this mode of geographical ordering excluded existing ways of valuing the landscapes and of engaging with water beyond its flowing form.

At the time of Independence in 1947, colonial understandings of rainfed regions as ‘unprotected’ (hence drought-prone) were brought forward into the national policy agenda. Concerned with achieving food self-sufficiency, India invested heavily in increasing the agricultural productivity of irrigated regions, promoting high-yielding varieties of selected crops (mainly rice and wheat) and the use of chemicals. Crucially this approach marginalized rainfed areas and their livelihood practices, creating a discriminatory policy environment biased towards production-boosting technologies and perennial irrigation.

To date, public investments to support rainfed agriculture mainly come in the form of watershed development programs promoting small-scale rainwater harvesting and groundwater recharge through percolation tanks to increase water availability locally. While undoubtedly a welcome alternative to large dams and centralised water control, watershed approaches have also been criticised for replicating a supply-oriented paradigm that discounts the influence of thirsty crop choices and groundwater over extraction in the uneven distribution of benefits locally. Weak links between water conservation and resource management reveals how the philosophy behind watershed efforts often replicate a mindset of ‘irrigation at all costs’. The aim being to overcome a seemingly natural condition of water scarcity by securitizing agriculture production, rather than making rainfed agriculture itself more prosperous and resilient.

As I write, the manifest impacts of climate change add to existing vulnerabilities that carry strong gender, caste and religious connotations. Policy response tends to be narrowly translated into ‘Climate-Smart’ and ‘Climate-Resilient’ agriculture, technical fixes to support an evergreen ‘rainbow revolution’ that will help rainfed regions catch-up with the rest of the country. These seemingly benign climate solutions are the manifestation of what Lyla Mehta called a ‘new politics of scarcity’, new configurations of power, authority and knowledge that, while presenting themselves as opportunities for increasing resource efficiency and ‘green’ growth, hide their inherently contested and political character.

“Forget about irrigation, you need to start following the route of the rainfall!”

Nothing better exemplifies the manufacture of scarcity than the way policies reduce water to irrigation. As Ravindra, the Director of the Network, explained to me, “the problem is that right from the beginning, the way you deal with water is by reducing it to irrigation. But water in rainfed regions is much more than that.” The result is a bias of data, numbers and parameters measuring the effectiveness of agriculture programs with a narrow focus on increasing supplies of irrigation to boost production.

Yet, as Ravindra explained, water in rainfed regions follows the route and timing of the rainfall. Rainfed irrigation requires attentiveness to make sure precipitation is stored across the soil profile, capturing it carefully by selecting a variety of crops with different root networks grown in combinations so that moisture is tapped at multiple depths, the mixed foliage of these different plants with their growth time covers the soil at all times, reducing evaporation and protecting microbial life. Irrigation only comes at a later stage, when moisture gets lost during a dry spell or early cessation of the monsoon and additional ‘protective’ watering becomes necessary to support crop’s growth at critical stages. To enlarge our understanding of water’s worth beyond its productive potential, the Network suggests shifting our focus from the perspective of the rainfall, its spatial and temporal dynamics and the interrelations that precipitation creates with other livelihood activities characteristics of rainfed regions.

“When you start from the rainfall” Ravindra says, “then the soil comes into picture, the crop system comes into picture, the root zone moisture and the organic matter comes into picture. You begin seeing farmers’ knowledges and ability to integrate farming with other livelihood activities. All these things would not have come to mind if you started thinking about water in the conventional way!” From fishery to pastoral and forestry activities and crafts, this perspective points to a series of ecological and economic relations that become visible when engaging with livelihoods that are timed to precipitation. 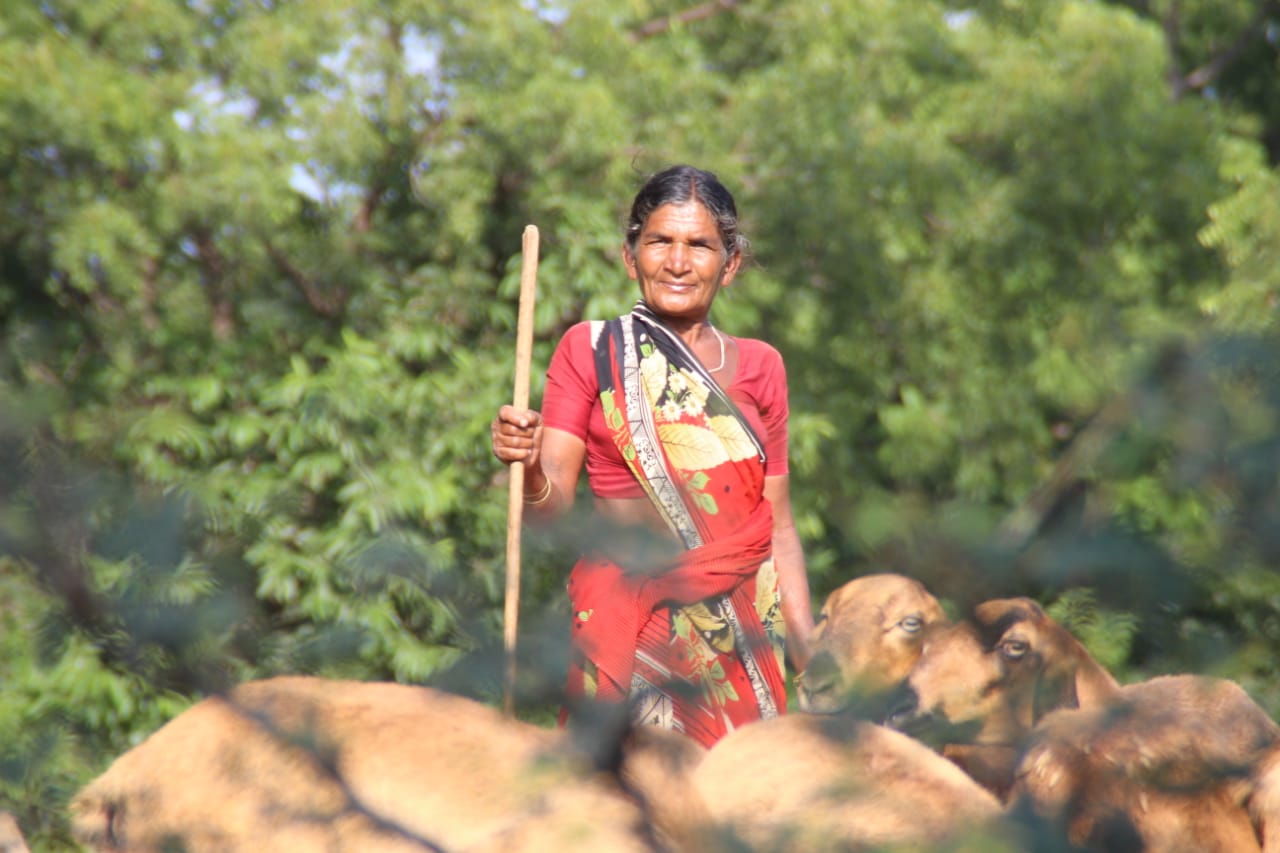 A shepherd in a rainfed region. Source: RRA Network.

Reflecting on my conversations with members of the RRA Network, I was reminded of a book titled ‘The Invention of Rivers’ by Da Cunha. In this book Da Cunha describes rivers as a feat of colonial design made possible by an act of drawing a line over the landscape, a line that neatly separates water on the one side and land on the other. Flowing along this line, water is rendered knowable, calculable, and put to efficient use to increase agricultural productivity. By contrast, all other waters tied to the ‘vagaries of the monsoon’ are too fraught with uncertainties to constitute an alternative for building prosperous rural communities. A decolonial society is one that is able to abandon this imagination of water as restricted to predictable and linear flows to make room for practices, knowledges, and relations that follow the ebbs and flows of life in precipitation. Wasn’t this, I wondered, what RRA members were trying to achieve?

“The opposite of scarcity is not some quantitative material abundance, but a liberation from the constraints imposed on our understanding by social, political and other factors”. To construct alternatives to naturalised scarcity framings, Zadek suggests, we need new ideas, metaphors, visions and theories. While some may seem strange, funny or utopian at the start, they could nonetheless spark our imagination away from gloomy prophecies of climate catastrophes leading to techno-economic preoccupations with efficient allocations of scarce resources.

Proposing the rainfall as a different point of departure, RRA Network suggests a vision for a revitalised understanding of rainfed landscapes where a plurality of ‘watery’ practices and knowledges find space. Abundance is made possible by acts of naming, giving space and recognising existing methods of cultivation, local plant varieties, and indigenous animal species with the hope that, by giving them new visibility, they will find a place in policy debates.

The ‘revitalised’ the RRA Network stands for should however not be confused with a call for going back to an idealised past. Aware of the many axes of marginalisation that marked societies across history, the ‘revitalization’ the RRA Network calls for speaks for a new imagination and enlarged sensitivity towards the interconnections that make humans part of a larger multi-species community. ‘We’ is larger than ‘us’ and we are to be cognisant of the ways our livelihoods and wellbeing are interdependent on and interrelated with that of many more others. This is not just a rhetorical shift, but a very material one. Calling on the state to take responsibility for today’s social, economic and political marginalisation of rainfed territories, the RRA Network asks for concrete forms of reparations in the form of increased investment to redress the injustices that emerged through old colonial patterns of social and ecological appropriation.

Engaging meaningfully with the reparative possibilities the Network proposes is a way to politically and ethically confront the overlapping crises of our time. From climate change to the pandemic, learning from their work indicates ways of reconfiguring future trajectories based on alternative and more just relationships with other beings.

Arianna Tozzi is a PhD researcher in Human Geography at the University of Manchester. In her research she uses feminist and decolonial approaches to unpack the intersecting impact of climate change, development policies and the processes of rural agrarian transformation in rainfed areas of Maharashtra.