Bolsonaro Calls for Carnage and Environmental Holocaust in Brazil 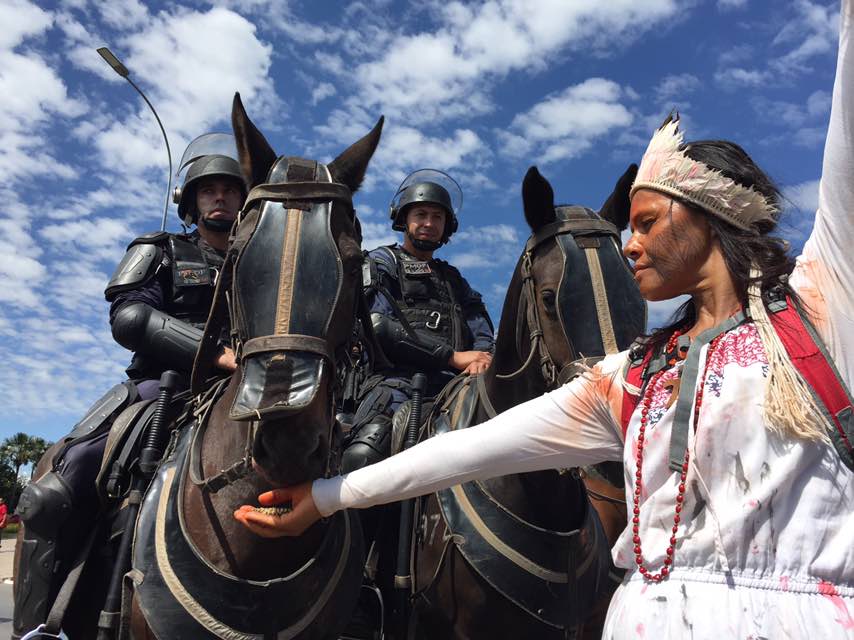 Brazil’s extremist candidate in the upcoming presidential elections feeds hate, promises to arm murderers, and plots a massive land grab in the Amazon ― one that would amount to genocide and ecocide.

This article first appeared in Carta Capital. It was translated and updated.

The assassination of peasant leader Aluisio Sampaio on October 11 by gunmen at his home in Castelo dos Sonhos in the Northern state of Pará, signals an explosion of violence in Brazil’s countryside, especially in the Amazon. As a member of the Federation for Workers in Family Farming, Sampaio led land disputes against grileiros (land grabbers). His contract killing was followed by the assassination of Davi Mulato, of the indigenous Gavião people, also in the Amazon region, in the state of Maranhão. The murder was denounced as a hate crime by the indigenous movement.

Also widely denounced was the killing of the capoeira master and artist Moa of Katendê in Salvador, Bahia, after he stated in a political discussion that he intended to vote for the Worker’s Party (PT) and against the fascist candidate Jair Bolsonaro. Moa was subsequently stabbed 12 times with a pexeira (a knife) by a supporter of Bolsonaro. And, in the city of São Paulo, Priscila, a transgender woman was also killed by knife by a group of men as they reportedly shouted “Bolsonaro!”. 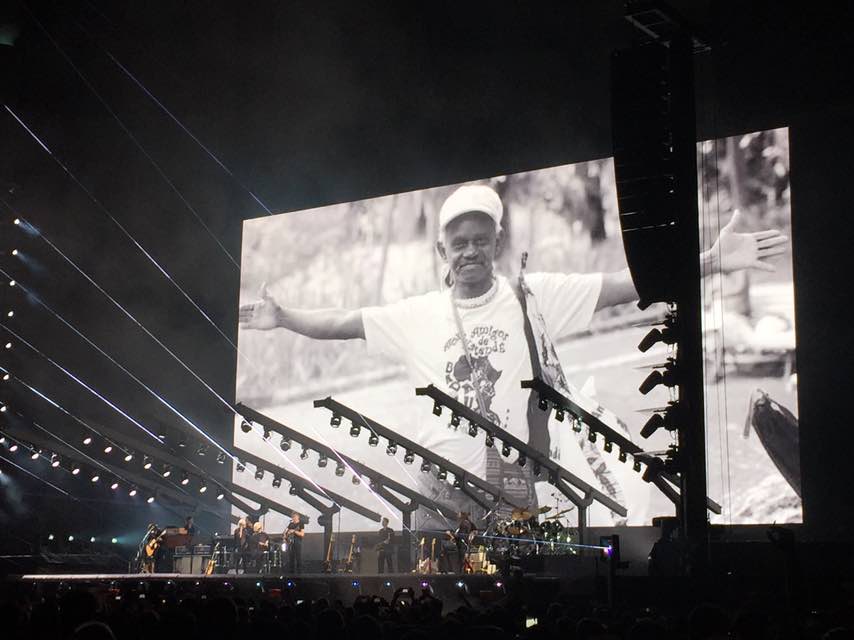 “A Tribute by Roger Waters for Moa in Salvador”. Source: Felipe Milanez

As hate crimes and fascism are spreading in Brazil, it is notable that Bolsonaro’s campaign is not marked by the usual use of election stickers, signs and shirts. A rather discreet campaign is proceeding, hidden in the chat-channels of social media. As a report by Folha de S.Paulo shows, the misuse of WhatsApp by wealthy backers of Bolsonaro to spread fake news amounts to a criminal manipulation of the Brazilian election.

The rich people of São Paulo remain discreet. They do not publicly give off any sense that they intend to vote for Bolsonaro. It seems as if Bolsonaro’s supporters are not voting for a candidate but hiring gunmen. This is similar to the ways things get done in the Amazon, where rich ranchers hire professional killers to execute political contenders ― discreet but determined, plotting the most cruel and violent ways of executing someone.

Through hate speech and the candidate’s promised government programs, many innocent people are likely to be added to Brazil’s darkest of statistics: the death list of environmental and human rights defenders. In fact, Brazil already is the world’s most dangerous country for defenders of the environment, according to Global Witness.

Gunmen and militias across the Brazilian countryside are now investing in guns. Their shady business is booming as they await new contracts to kill. Shortly after the first round of elections, Bolsonaro declared that he would end left-wing social and environmental activism in the countryside, inciting the assassination of militant members of the Landless Workers’ Movement (MST), trade unionists and indigenous people, as well as promising that ranchers will soon be allowed to buy rifles to kill. In his most recent video address he called for a purge of all ‘Red’ political rivals.

His promises, both in rhetoric and in his government programme are terrifying. I have read the proposed programme and compared it to his campaign speeches. The discourse can be interpreted as a call for ecological and human holocaust. Put into practice, the consequences of this programme would entail unprecedented rates of deforestation in the Amazon, invasions of indigenous land and destructions of peasant settlements, as well as the reversal of previous land reforms. In its totality this would amount to one massive land grab. Ecocide and genocide will materialize as a politics of death ― Bolsonaro’s necropolitics, as Achille Mbembe would call it.

In the candidate’s proposed programme, “private property” has no social function, in contrast to the definition engrained within the 1988 Brazilian Constitution. Judging by his programme, private property is just a euphemism to legitimize land grab, robbery, embezzlement, plunder and grilagem. The use of the word “freedom” in the programme, moreover, does not represent a guarantee of rights but exactly its opposite: the violation of rights. Freedom is morphed into the right to exercise violence against the ‘other’ and can be understood by some as a permission to kill at will. Private property and freedom are the two main pillars of Bolsonaro’s political programme which envisions the construction of a violent order of injustice.

While the Brazilian flag is inscribed with the positivist motto ordem e progresso (order and progress), Bolsonaro’s impending new order signals the progress of violence, of retrocession, and of blood. Once in power this new order is likely to be implemented by private militias and hate groups. Provisional measures will include the authoritarian control of Congress. The exception of the rule of law will be implemented by “law and order”, enforced directly by presidential decrees. This only adds to an ongoing project of law which seeks to render any ideological, political and social activities as “terrorism”.

For the countryside, Bolsonaro preaches the reversal of agrarian reform and demarcations of indigenous territories. He wants to legalise illegal land grabs of land inhabited and cultivated by indigenous peoples, quilombolas and peasants. The socio-ecological violence which Bolsonaro intends to use is so extreme that the more sensible farmers are seriously concerned about the impact this will have on business. The agribusiness sector fears his radicalism as there will be no market―neither in Brazil nor, hopefully, abroad―for the blood that will be dripping in the farmers’ fields.

The Brazilian Ministry of the Environment (IBAMA) will effectively become extinct. Bolsonaro wants to relegate it to the status of a secretariat under the Ministry of Agriculture. Its leadership, he promises, is to be assumed by the rancher Luiz Antônio Nabhan Garcia, the current president of the violent Rural Democratic Union (UDR). In other words, he is putting the Ministry under direct control of environmental destroyers ― ranchers, empowered by the state to promote ecocide. Nabhan Garcia openly declares that global warming is a myth and that climate change was created by the Left as a conspiracy to conquer the world. He also proposes that anyone who buys land in Brazil shall also have the right to deforest it.

With such measures, the public Chico Mendes Institute of Conservation and Biodiversity (ICMBio) could fall under the command of the head of the same organization that was behind the murder of Chico Mendes: the UDR. There is a history of involvement of members of the UDR in the assassination of rural leaders. Marcos Prochet, the former president of the organization, was convicted of the murder of the landless rural worker Sebastião Camargo, in Paraná, in 1998. In 2016, he was sentenced to 15 years in prison. Under the rancher’s command IBAMA and ICMBio will become a banquet for the foxes.

The Ministry of Transport is set to be led by Gen. Oswaldo Ferreira who would then take charge of infrastructure construction in the country. He prides himself with saying that during his previous term in office, three decades ago under Brazil’s military dictatorship, there was “no public prosecution, nor IBAMA to fill their pockets”. Of his past achievements he boasts:

“I cut all the trees that were in front of me, without anyone pissing me off”.

Without a Ministry of the Environment, without IBAMA and without ICMBio, he may soon be able to deploy armed militias and provide them with a free pass to “cut all the trees” that still remain in his way. “There is still space for deforestation in the Amazon”, Bolsonaro recently declared.

Their policies will add to the isolation of Brazil in the international community. International pressure was in the past responsible for national commitments to regulate deforestation in the Amazon which impacts the global climate. Bolsonaro further promises to leave the Paris Agreement within the UN Framework Convention on Climate Change, end the commitment to control deforestation, and exit from Convention 169 of the International Labour Organization, as well as the United Nations Declaration on the Rights of Indigenous Peoples. 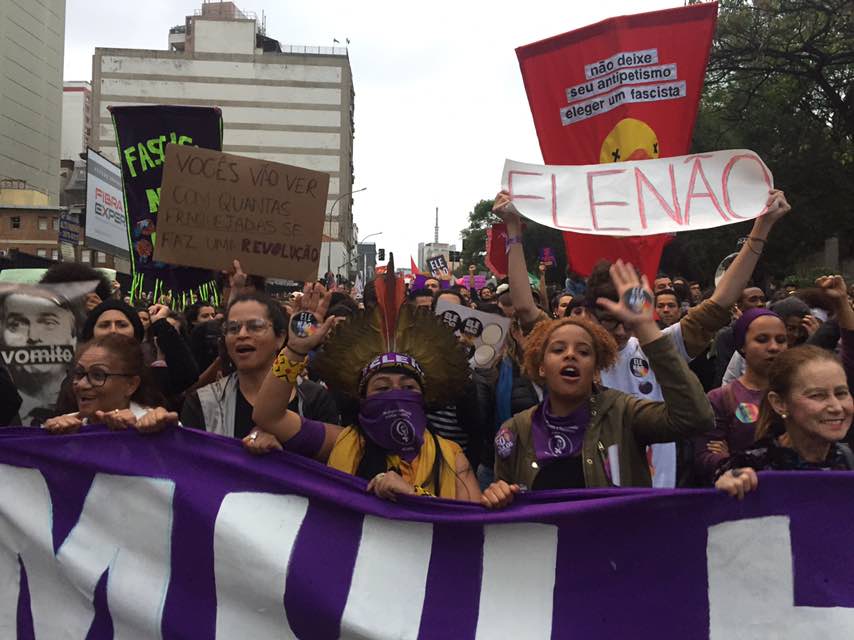 It was after the Second World War and the barbarism of Nazism that the UN approved the Convention for the Prevention and Suppression of the Crime of Genocide. And, it was only as recent as 1989 that the ILO approved Convention 169. Promulgated in Brazil on April 19, 2004, it has the same legal weight as the national constitution and guarantees the recognition of existence of indigenous peoples in the world and the responsibility of governments to defend their rights. In addition to Convention 169, Brazil was one of the main driving forces behind the Declaration of the Rights of Indigenous Peoples.

Bolsonaro wants an exit from Convention 169 so as to further encroach in on the Amazon. He wants to do so by implementing his famous promise of “not an inch more for indigenous lands”, by ending the title rights of rural black communities quilombolas, who he says “are not even able to procreate”, and by enforcing “environmental licensing within three months”, which implies the approval of investment projects without prior social and environmental impact assessments.

Regarding public concerns about the risk of genocide, Bolsonaro said that “minorities have to bend to the majority, adapt or just disappear”. Speaking at the National Congress, he attacked the UN Declaration on the Rights of Indigenous Peoples, repeatedly expressing his disapproval of the recognition of indigenous lands in Raposa Serra do Sol, in Roraima. Targeting the indigenous lands in Raposa Serra do Sol, Javari Valley and Yanomami for resource exploitation, he accuses the Indians of wanting to separate from the country and considers the land demarcations a “crime of high-treason”. And, in his most recent interview, Bolsonaro mocked that the real problem of the Amazon is “too much indigenous land”. 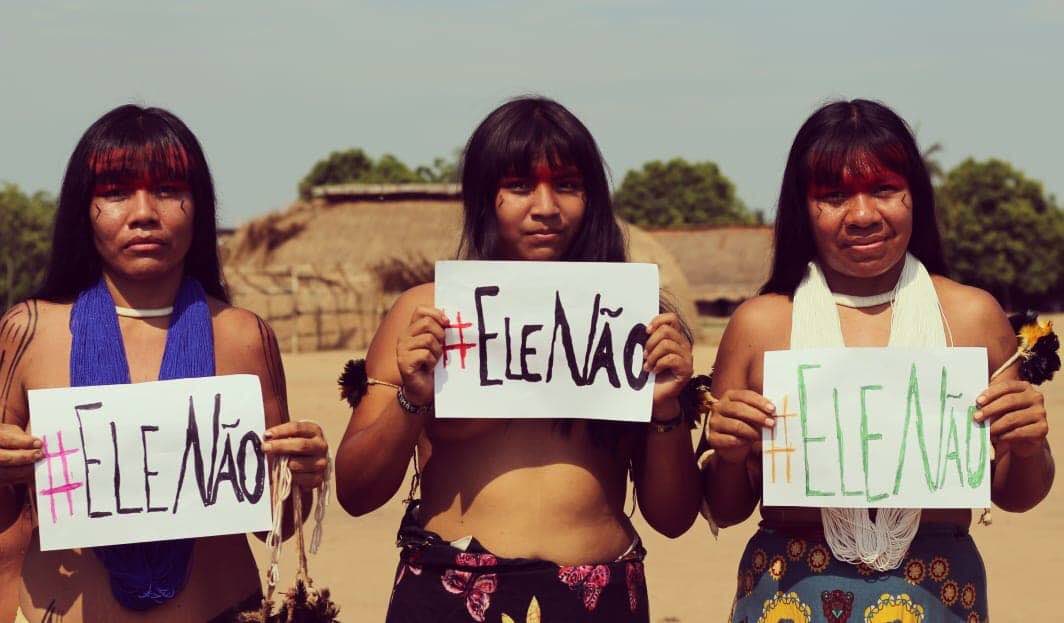 The election of Joenia Wapichana (REDE), the first indigenous woman to assume the role of federal representative in the Brazilian Congress, is indeed an encouragement for the indigenous movement and the resistance against Bolsonaro. In the past she gained notoriety as an indigenous lawyer who defended the demarcation of the Serra do Sol Raposa in the Federal Supreme Tribunal (STF). Yet, the future scenario is one of an explosion of conflict. Sonia Guajajara, the most prominent indigenous political leader in Brazil today, warns that Bolsonaro wants to “legalize the genocide of indigenous peoples in Brazil and set precedents for regression in Latin America”. As the distinguished indigenous intellectual and lawyer Eloy Terena recently told me,

“Bolsonaro represents everything that is a threat to the lives of indigenous peoples. In addition to being against our rights, he is the maximum expression of a significant part of Brazilian society that does not acknowledge human diversity. People who follow him revel in this opinion and all its racism”.

The damages caused by ending the safeguards of conservation of the Amazonian forest, the Savannah and other Brazilian biomes will be irreversible ― as will be the lives lost due to genocide.

Felipe Milanez is Professor of Humanities at the Federal University of Bahia (UFBA), a member of the ENTITLE collective and organizer of the III Latin American Congress of Political Ecology, to take place from 18-20 March 2019, in Salvador, Brazil. Follow him on Twitter @felipedjeguaka.