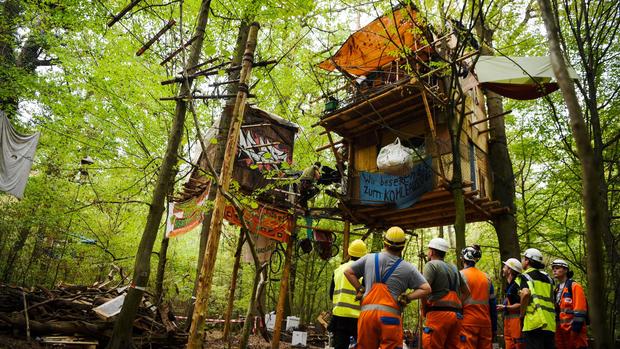 Activists have occupied Germany’s Hambacher Forest for six years to prevent the area being destroyed and mined for coal. This month the forest has been making headlines as police brutality, coorporate power and state violence combine to attempt ousting the occupiers for good.

This is a revised version of an article originally published on red pepper.

Employees of RWE in fron of the activists’ tree houses. Source: dpa/wiwo.de.

Yesterday, on 30th September 2018, 15,000 people came together to protest against one of the largest policing operations in the history of the German state: The eviction of the Hambacher Forest occupation in the German Rhineland. With water cannons, tanks, thousands of police officers, police dogs and brute force, police forces continue to evict hundreds of forest protectors. The government seems determined to facilitate the continuation of logging operations – scheduled to start mid-October – for the mining of lignite coal at all costs.

Ten days ago, on 19th September, the eviction claimed its first human victim. In a tragic accident, a forest protector and journalist died after falling off a tree bridge, whhen he was rushing towards fellow forest defenders who were being evicted by the police. After a mourning period of less than 24 hours, the eviction continued at full force – with forest defenders being dragged across the floor, many suffering injuries during the eviction.

Journalists have been banned from large areas of the forest, others physically assaulted. Dozens of forest protectors have been arrested, some continue to be imprisoned for 10 days or more. Meanwhile, state forces are spreading deliberate lies about ‘violent criminals’, ‘eco-terrorists’ and ‘Vietnam-like tunnel systems’. Police officers have been called out for presenting tools and other objects that had been found years earlier as ‘recent finds’ and evidence for forest protectors’ willingness to engage in violence.

But Hambacher Forest protectors are not giving up. With every treehouse that is torn down, it seems, solidarity is growing, more people are coming into the forest to re-build and to barricade. Hundreds of people continue to put their bodies in the way of German police forces to protect the ancient forest, which has become a symbol of resistance and of an alternative life of fighting patriarchy, borders and racism, and the capitalist industrial system of profit and domination. Despite best efforts to stop people, food and even large quantities of water from entering the forest, police lines are regularly broken, and many have managed to re-occupy trees or climb on machinery.

The 12,000 year old forest is home to 142 types of birds and 13 species protected under EU legislation – including the Bechstein’s bat, the endangered hazel dormouse and the middle-spotted woodpecker. But it has also been a home to many of the people who are currently being evicted – many forest protectors have been living in the forest for years. They first occupied the forest in 2012, building tree houses and barricades to stop the destruction of this unique ecosystem for the expansion (or ‘migration’, according to the mine operator) of the Hambacher mine – the world’s largest opencast lignite coal mine and ‘Europe’s biggest hole’. 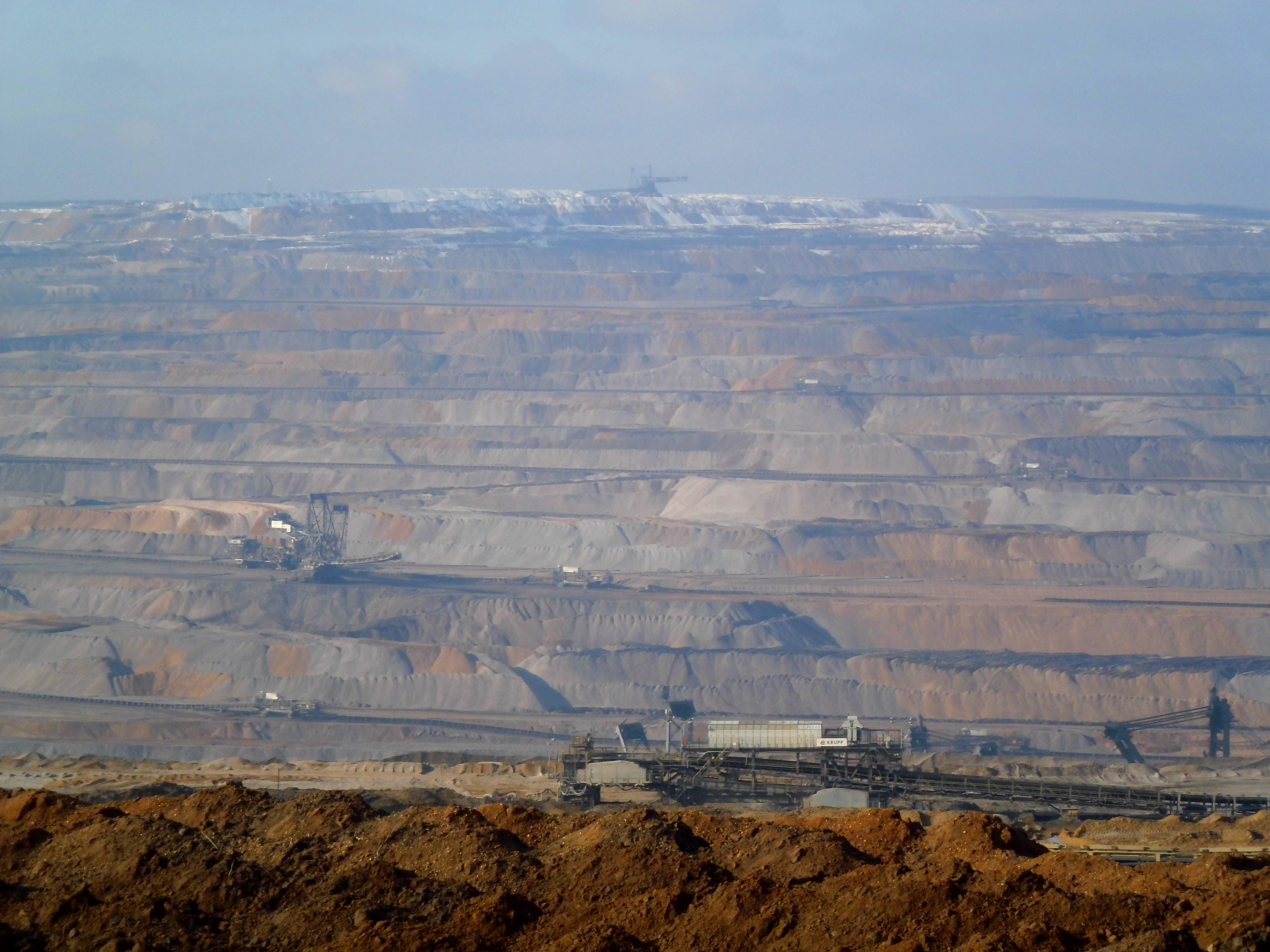 Since 1978, mining operator and self-proclaimed energy giant RWE – supported and subsidised by the German state – has been extracting and burning lignite coal, the dirtiest of all fossil fuels, in five power stations surrounding its three opencast mines in the Rhineland. The Hambach mine alone has required (and continues to require) the displacement and resettlement of 6 villages – over 5000 people – creating social tensions and trauma. By 2026, a planned total of 42,000 people will have lost their homes in the Rhinish coal region.

RWE is not only Europe’s largest emitter of CO2, but also a uniquely powerful company with close ties into the heart of the German state, structurally entrenched into the local political economy and historically able to exercise unparalleled political influence. In the UK, RWE operates Aberthaw coal-fired power station, the country’s dirtiest power station, responsible for an estimated premature 400 deaths per year due to nitrogen oxide exposure. 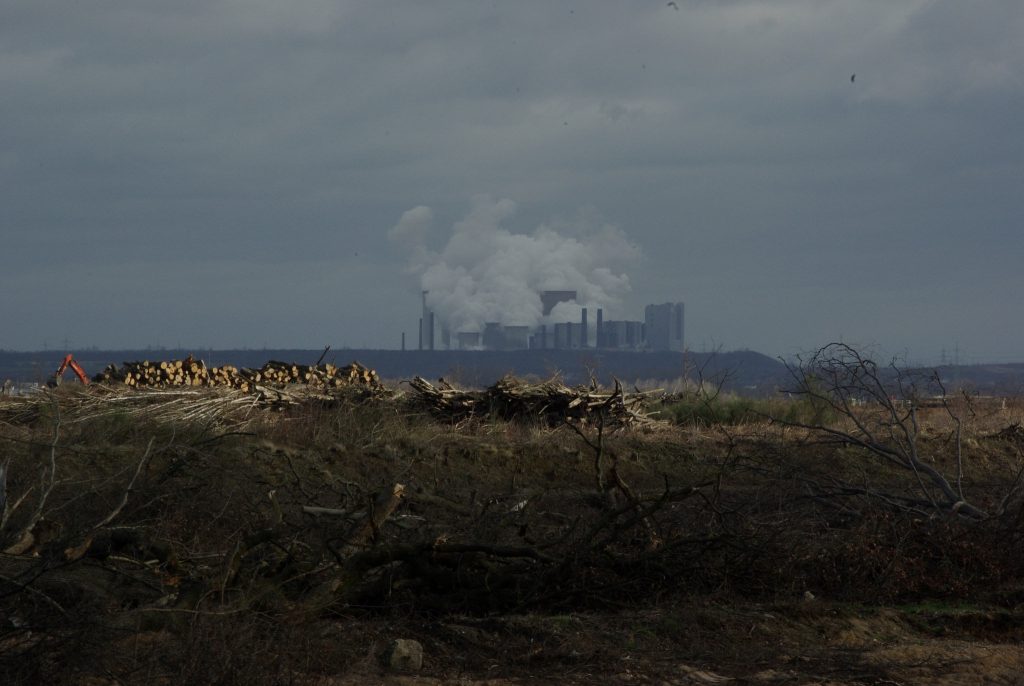 Already in 1979, the German news magazine Spiegel warned: ‘Unrivalled and barely manageable, RWE is ruling over one of the largest monopolies of the Western world’. The company has spent millions of Euros each year on lobbying in Berlin and in Brussels, to and in pay-outs to hundreds of local politicians (and state parliamentarians) through so-called ‘regional advisory councils’. Close relationships with politicians – who continue to be paid high salaries for being on the boards of the same company they are meant to regulate – have been documented across all political parties.

This has also led to close collaborations between police forces and RWE’s private security forces in what have been criticised as ‘public-private security partnerships’ involving the sharing of resources and vehicles, for instance. In 2016, it was revealed that at least one member of the state’s parliamentary Interior Committee, responsible for policing the Hambacher Forest, was also an RWE employee with an annual corporate salary of up to €120,000 – only slightly less than his government salary of €128.712 – and privileged access to insider-information which could affect the company.

While police and other state forces continue to criminalise forest occupation and stigmatise forest protectors as ‘violent’ and ‘eco-terrorists’, the situation on the ground shows a different picture: a government that – while celebrating its ‘green leadership’ – continues to protect fossil interests at all costs, laying bare its unconditional commitment to extractivist ideology and private profits at the cost of human and ecosystem health. 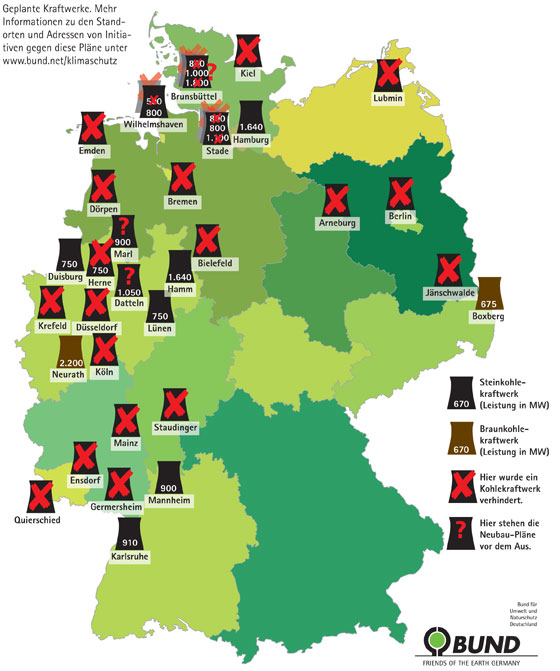 List of planned/under construction coal-fired power plants in Germany, though many of these have been stalled/prevented (05/2016). Source: bund.net.

For decades, state and corporate collaboration managed to suppress, divide and conquer resistance: through the stigmatisation of activists, intense lobbying efforts on part of RWE, the infiltration of decision making processes and community organisations, the establishment of fake citizens’ initiatives in support of coal mining (i.e. astroturfing) and Corporate Social Responsibility and Public Relations strategies which have included ‘omnipresent sponsorships’, according to residents, in primary schools, church choirs and football clubs.

Furthermore, the company engages in ‘environmental education’ and restoration activities that have been criticised as ‘greenwashing’, given their CO2 footprint and habitat destruction. Such initiatives maintained an image of RWE as ‘good corporate neighbour’ and ‘responsible corporate citizen’, supported by government efforts to position the ecological destruction and displacement and dispossession of local communities as unavoidable for energy security, fuelling fears of ‘black-out’, ‘de-industrialisation’ and dependence on foreign energy sources.

At the same time, repression, criminalisation, physical violence and divide-and-conquer strategies were used to manage more militant resistance. Forest protectors have reported countless examples of intimidation, threats of rape against female activists and beatings. RWE security forces have been documented chasing forest protectors and cutting tree house ropes to make activists fall six metres to the ground. They have been reported to use pepper spray; wearing masks, throwing rocks, intimidating and attacking people with vehicles, spitting on activists and letting dogs loose to follow them. Similar allegations have been raised vis-à-vis the police. Forest protectors have reported serious injuries and abuse by police forces during and following arrest, including sprained wrists, haematomas, broken noses and fingers, lost teeth and refusal of medical treatment. Others have reported that officers pepper sprayed and kicked people’s faces with boots and beat them outside and inside police custody. 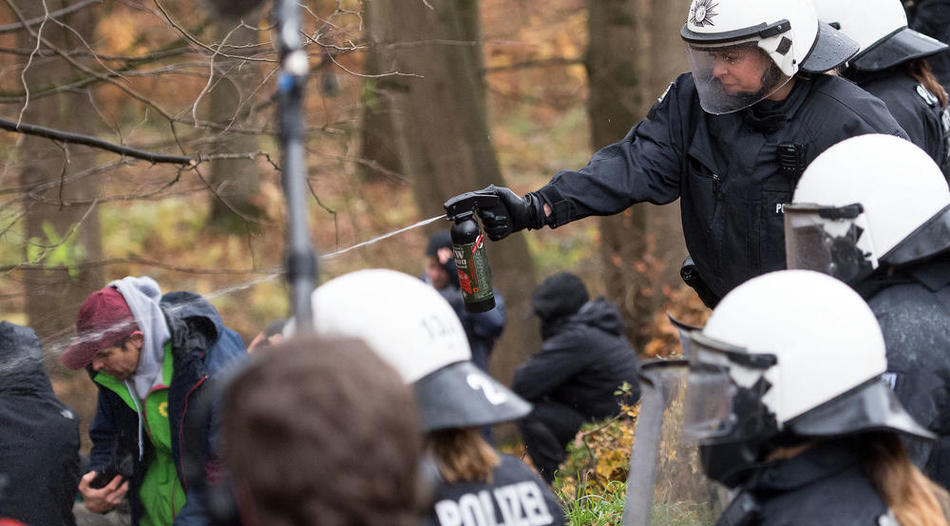 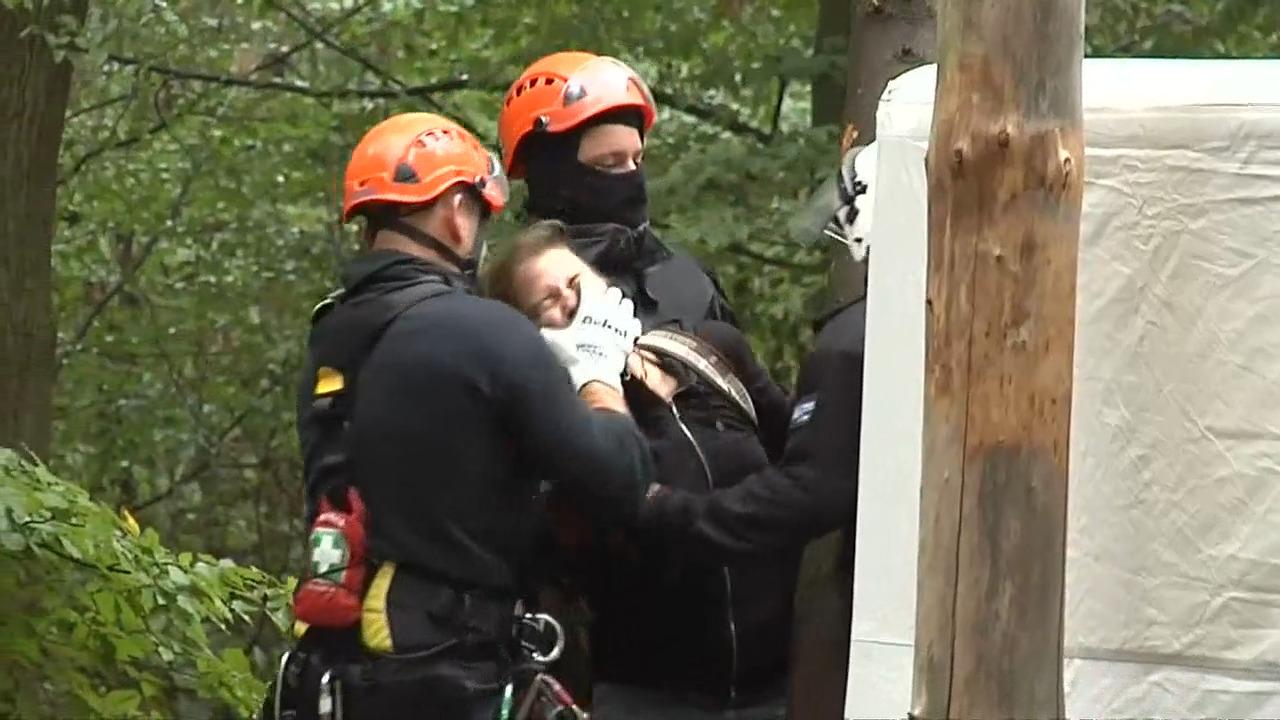 Only last week, the police drew their guns on activists and residents bringing a new field kitchen into the forest. In July this year, a 23-year old forest protector was sentenced to a 9 months prison sentence for breach of the peace and complicity in attempted bodily harm. This sentence was not for active participation or physical resistance, but for playing a drum in the presence of others who were alleged to have engaged in illegal activity. The judge herself acknowledged the “preventive character” of the sentence.

Close political ties and unconditional state support have enabled RWE to continue mining coal and destroying rare and ancient forest ecologies in the face of unprecedented resistance by forest protectors and public opposition to coal. The intensity with which the state is responding to the Hambacher resistance, and the determination with which it is evicting the forest, illustrates well what is at stake in this situation. RWE’s positive image has been crumbling, and the debate around coal – and the Hambacher Forest – has finally reached the mainstream media with daily – often critical – TV, radio and newspaper coverage. While on the national level, political negotiations, public and political debate about coal-phase-out continues, it seems like RWE and the state government are scrambling to create facts on the ground.

Solidarity with the forest has never been bigger. On 14th September, two dozen activists occupied the offices of the state of North Rhine Westphalia in Berlin. On 15th September, 20 people occupied the nearby Niederaussem power station, in which RWE’s coal is burnt, shutting down large parts of the power station. A few days later, others shut down the train tracks on which coal is transported. Every Sunday, sometimes in heavy rain, up to 15,000 people have been attending demonstrations near and in  the forest, with hundreds breaking police lines to join the occupation, and hundreds more taking direct action or civil disobedience to protect the forest. Elsewhere, protectors have occupied government buildings, organised sitting blockades and subvertising (placing fake advertising posters about RWE), and sending solidarity messages, photos and videos from across the country and beyond. A petition to stop the destruction of the forest has reached over 770,000 signatures. 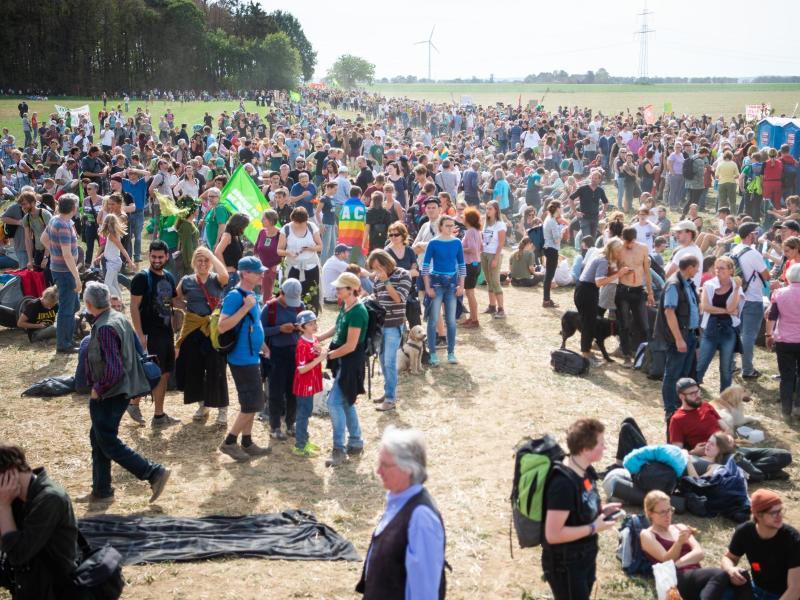 Thousands demonstrating against the destruction of the Hambacher forest for coal mining on 16 September 2018. Source: Christophe Gateau/maz-online.de.

Yet, the German state seems determined to present a fait accompli. Officials justify the eviction citing ‘fire safety’ (after 6 years of occupation and following a period of heavy rain) and ‘acute’ concerns about protectors. The footage and reports of protectors who are being cut out from their tree houses in violent manners only illustrate the hypocrisy of the situation.

While state and corporate forces allege that ‘violent’ behaviour on the part of the forest protectors merits a public hazard to be eliminated through force, what has become increasingly clear is that the true violence at play is that which is inherent to ecologically destructive and socially traumatic coal extraction. It is the licence to destroy nature, uproot families  and profit from it that the state and RWE are defending at all costs.

More broadly, this is the violence inherent in anthropogenic climate change and its disproportionate impact on marginalised peoples and communities in the global South, and the violence exercised by police and security forces that forest protectors are exposed to – and are actively resisting — every single day. 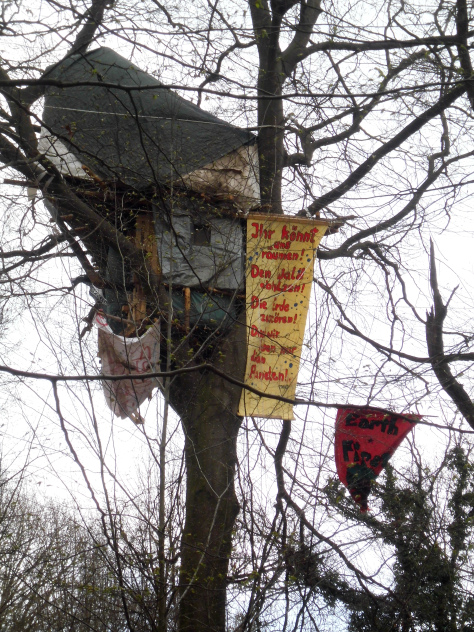 Want to know more or get involved? Updates on twitter #HambiBleibt and #HambacherForst, or online at https://hambachforest.org/

Or join the forest occupation, the many daily and weekly demonstrations and actions, or the mass action of civil disobedience in October (Ende Gelaende).

Andrea Brock is a Lecturer in International Relations at the Centre for Global Political Economy, University of Sussex.