Renewing cooperation on water: what hope for the two-state solution? 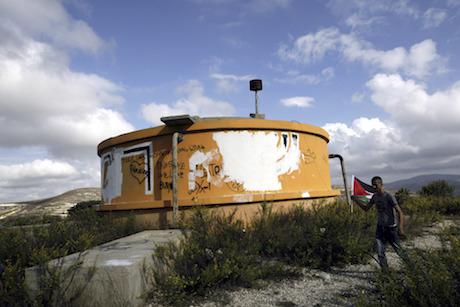 By Jan Selby*
A new agreement between Israel and the Palestinian Authority gives Israel carte blanche to expand water provision for illegal settlements.

15 January, on the very same day that diplomats from 70 countries were meeting in Paris to reaffirm their support for the two-state solution, Israeli and Palestinian officials announced that they were restarting cooperation on water issues after a six-year hiatus. The Jerusalem Post called this agreement ‘a shining example of how cooperation on issues of quality of life can build trust’, while the UN’s Middle East peace envoy, Nickolay Mladenov, proclaimed it ‘an important step towards preserving the two-state solution’.
Unfortunately, and as so often, the truth is rather different.
To see why, consider the reason for the six-year hiatus: a 2010 decision by the Palestinian Water Authority (PWA) that it would no longer be willing to approve projects for Israeli settlements brought before the Israeli-Palestinian Joint Water Committee (JWC). Under Article 40 of the 1995 Oslo II Agreement, which established the JWC, every new or expanded water facility in the West Bank – every well, pipeline and wastewater system – had to obtain prior approval from both Israeli and Palestinian representatives.
Article 40 was widely assumed, at first, to be just about Palestinian water needs in the West Bank. But in 1997, during Benjamin Netanyahu’s first stint as Israeli Prime Minister, Israel started making its approval of Palestinian water projects conditional on simultaneous Palestinian approval of settlement water facilities. Given the severity of the water shortages that were plaguing most Palestinian towns and villages, the Palestinians found themselves over a barrel. And they soon caved in.

The upshot was that between 1998 and 2010 the PWA gave its written approval to more than 100 major water infrastructure projects for settlements – every single project requested – despite the fact that the settlements and their infrastructures are illegal under international law and the number one obstacle to Palestinian statehood. This ‘pragmatic’ though little publicised policy was pursued with the full knowledge of Presidents Mahmoud Abbas and before him Yasser Arafat.
The quid pro quo that was at work is readily apparent from what subsequently transpired. When a newly appointed head of the PWA decided in 2010 that he would no longer be willing to approve settlement projects, Israel responded by refusing to approve Palestinian ones, and the JWC stopped meeting altogether. Even major private sector initiatives like the new Palestinian town of Rawabi found themselves denied permission for much-needed water supply infrastructures. Six years on, the PWA now has 97 donor-funded projects awaiting Israeli approval.
This brings us to the recent agreement – which has not been made public, but which I have seen. At first glance, the agreement seems innocuous enough. All it does is state which subjects will from now on require JWC approval and, by extension, which ones will not. For the Palestinians this means that, where previously they would have had to obtain JWC approval if they wanted to lay even the smallest pipeline to an isolated Palestinian village, or to build it a new water storage tank, JWC approval will now only be required for drilling or upgrading wells, or abstracting more water from them. In this limited sense, the agreement gives the Palestinians greater autonomy in water management.
The problem is that the agreement also does the same for Israel, allowing it to lay as many new supply lines for settlements as it wishes. A PWA official has admitted as much, noting that ‘there will be no discussion of issues related to the settlements anymore’ within the JWC. And given that the settlements get most of their water via Israel’s national water network, rather than from West Bank wells, this means that the new agreement effectively gives Israel carte blanche to expand water provision for settlements.

At the same time, the agreement does nothing to change Israel’s overall control of the Palestinian water sector. Though Palestinians will now have autonomy to lay pipelines, what they won’t have is any additional water to go in them – except with Israeli consent. Moreover, even this autonomy will be partial: in the 60% of the West Bank under full Israeli control, known as Area C, all new infrastructures will still require Israeli planning approval. Over the last 20 years the water inequalities between Israelis and Palestinians have grown ever wider, and the West Bank has become progressively more dependent on Israel for its water supplies. This agreement will do nothing to reverse these trends.
Nonetheless, for the PWA, the obvious benefits of this new arrangement are that they can start getting their backlog of water projects implemented, and that they will no longer be asked to approve settlement projects. The disadvantage, however, is that the one instrument in the Oslo accords which granted the Palestinians the right to veto a part of Israel’s settlement programme has been quietly relinquished. And given current Israeli settlement building plans, including plans for a doubling of water supplies to the West Bank, this is not without consequence.
It isn’t difficult, of course, to identify the forces behind this renewed ‘cooperation’: on the one hand the most pro-settler government in Israeli history, and on the other a weak and dependent Palestinian Authority, desperate for improved water supplies and rightly fearful of what a Donald Trump presidency might bring. What is more shocking, though, is that over the last six years, international donors have been more interested in getting the JWC up and running again so that their projects might be approved, than in pushing for reforms that would actually support Palestinian rights.
What hope is there for peace – or indeed for the UN – when the UN envoy views an agreement licensing illegal settlement activity as a step towards the two-state solution?

*Jan Selby is Professor of International Relations at the University of Sussex. This post was originally published in openDemocracy.