A participant-observer look inside the advocacy and activist efforts of the transnational environmental movement at COP21, reflecting on different forms of diversity within the movement.

For the past two weeks, Paris was a microcosm that showcased the power asymmetries and social group differences that characterise our world.

Coming into COP21, it was evident that the summit had drawn a very diverse conglomeration of people, including diplomats, intergovernmental and non-governmental organisation staffers, journalists, social movement participants, and the often-invisible workers that staffed and serviced the event. COP21 also drew a diverse population of environmental justice advocates and activists. Here I review the advocacy and activist efforts of the transnational environmental movement in the wake of COP21. Specifically, I share a reflection on my participant observation of COP21 as part of an interdisciplinary team conducting a collaborative event ethnography, led by Purdue University professors Dr. Kimberly Marion Suiseeya and Dr. Laura Zanotti.

I went to COP21 interested in assessing how the diversity of the environmental advocacy organisations and the social group differences between people participating in these groups would affect their influence over the international negotiations. Two particularly salient dimensions of diversity between and within civil society organisations were: 1) the different perceptions that the members of civil society organisations had of the their likelihood of being politically influential during the negotiations at COP21 and 2) the different identities of people engaged in civil society efforts for tactical diversity. Here I focus on how these differences challenge non-state actors throughout international negotiations.

Some organisations came into the process with a discourse that showed scepticism of the negotiating process and little hope for influencing the eventual outcome of the COP21 negotiations. At this end of the spectrum were those that were already prepared for what they thought this accord would amount to—a monumental failure to enact a policy framework to mitigate and address the impacts of climate change. Before the text of the accord had been finalised, there were already groups calling what is now the Paris accord, a human rights violation.

Various activists groups inside of the negotiations, and many of their allies, presented a narrative that depicted COP21 as a corporate controlled fiasco. One of these was the Indigenous Environmental Network, whose perspective was articulated publicly in a press conference held at the Conference site. These groups did, however, seem open to seeing a just accord come into fruition. In fact, some of them had adherents inside the negotiations, carrying out advocacy efforts, and holding meetings with national delegations that objected to the language corresponding to civil society demands, as well as with career diplomats of supportive national delegations.

On the other side of the spectrum were those that came to Paris with the resolve to push negotiators towards enacting a just agreement. One could see participants of these groups scrambling on a daily basis outside of the negotiating rooms to check on the status of the, sometimes open but mostly closed, negotiations. Various civil society organisations held daily press conferences to disseminate news on the status of the negotiations. Members of these organisations, however, faced challenges gaining access and were not able to observe multiple meetings. The chairs of the negotiations argued that it was logistically impossible to stream all negotiations. 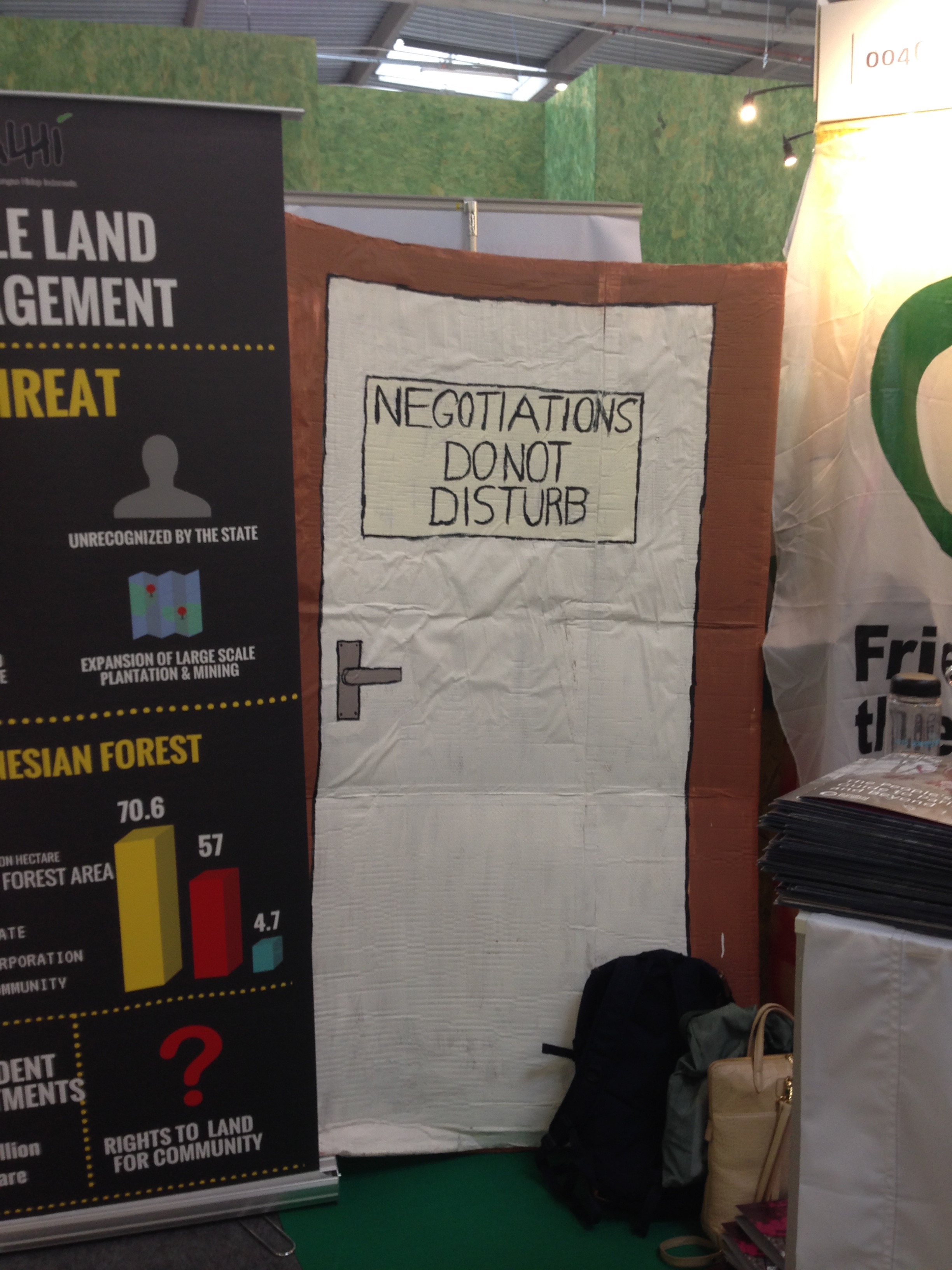 Friends of the Earth booth inside of the COP21 Blue Zone. Photo by Fernando Tormos.

Yet, the distinct perspectives on the likelihood of influencing the negotiations were not as challenging for civil society organisations as the social and political context that surrounded COP21. All public demonstrations in Paris were officially banned under a state of emergency. The reluctance of various members of civil society organisations to get arrested, be subject to house arrest, or get their conference credentials stripped, provoked lengthy debates during civil society meetings that aimed at coordinating direct actions. Under the declared state of emergency, the French government suspended the observance of multiple civil rights in the name of national security.

A second dimension of diversity within civil society that was salient throughout COP21, was the different identities of people involved in civil society efforts. Social groups, such as women, workers, Indigenous Peoples, faced questions of whether they wanted to cooperate with other social groups and how to coordinate their actions in spite of their differences. Throughout multilateral environmental negotiations, such as COP21, civil society groups often address their internal differences, but also leave some unattended or unresolved.

Political ecology approaches to the study of global environmental governance may provide a richer understanding of how the ongoing struggle of maintaining cooperative ties in a context of social group differences affects the political influence of non-state actors in world politics. It may also help to assess the importance of internal democracy and inclusion within transnational advocacy networks.

The collaborative ethnographic approach to studying the COP21 event gave our research team the opportunity to observe multiple spaces in which civil society organisations and their memberships interacted. The team is currently conducting its analysis of how social group differences affected the political influence of civil society groups in this international negotiating process. The team is also using the method of collaborative event ethnography to assess the politics of performance, translation, and representation at COP21. This work contributes to expanding analyses of multilateral negotiating processes beyond their policy outcomes to include assessments of the internal dynamics of civil society and networks of organisations.

* Fernando Tormos is a PhD candidate in Political Science at Purdue University (USA) with a specialisation in social movements and the politics of social groups. Specifically, his research is interested in how transnational labor, environmental, human rights, and student movements overcome internal divisions and gain political influence over global decision-making processes. Tormos is a member of the International Network of Scholar Activists (INOSA).

The research that the author draws on from for this blog was supported by the Purdue Climate Change Research Center, the Purdue University Department of Political Science, and it College of Liberal Arts. CEE relies on collaboration, in coordinating fieldwork, collecting and analysing data, and thinking through meaning, and this blog post reflects the efforts of the larger team working on site in Paris. The Paris-COP21 CEE team is composed of project leaders Kimberly R. Marion Suiseeya and Laura Zanotti, and researchers Scott Benzing, Sarah Huang, Fernando Tormos, Suraya Williams, and Elizabeth Wulbrecht.