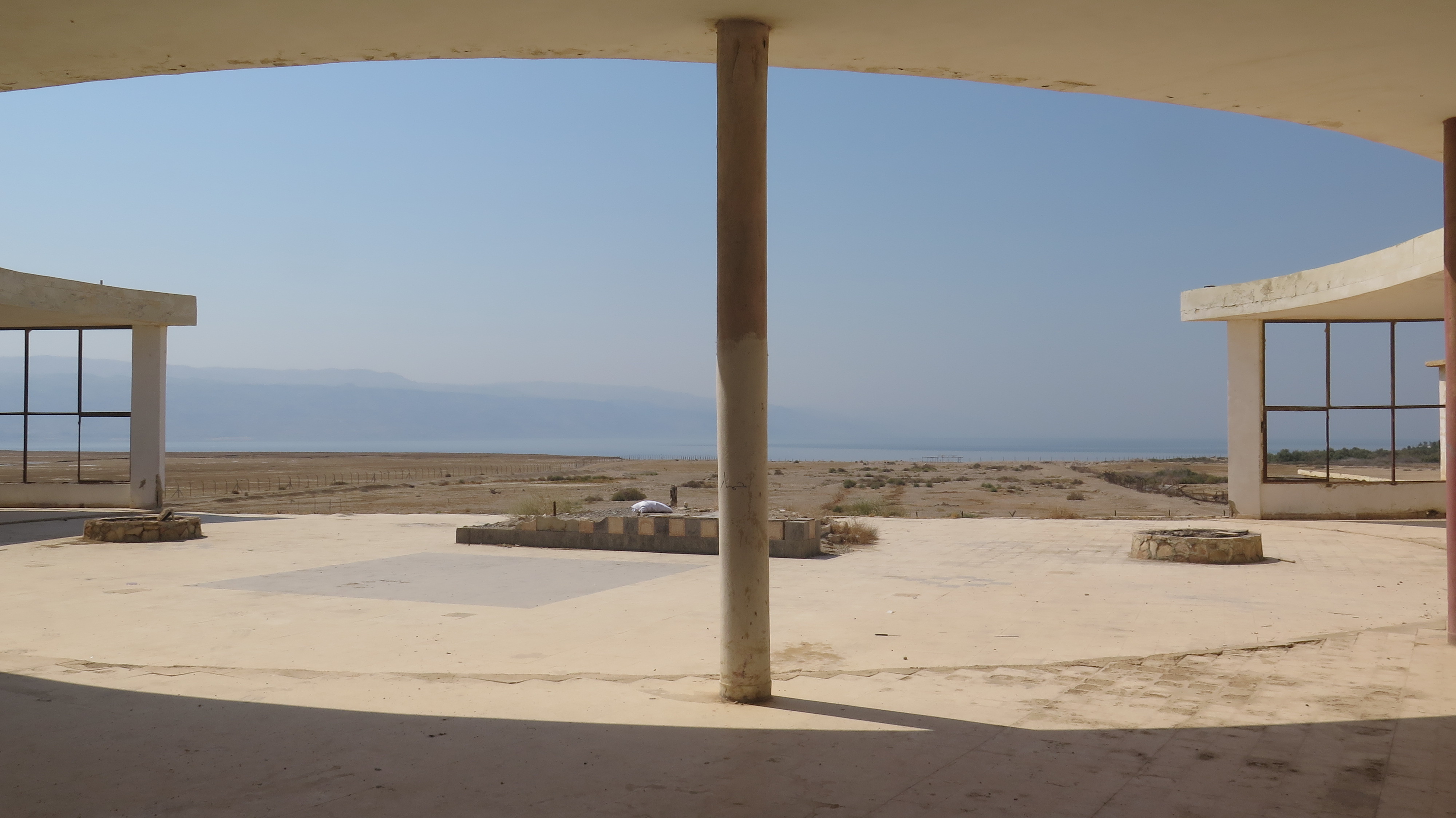 The Dead Sea wants used to reach to the steps of this deserted restaurant near Jericho. Photo by A. Huber

The Jordan Valley, in the northeast of the West Bank, is another area emblematic of the injustices Israeli occupation and settler colonialism are inflicting on Palestinians. It also showcases the dramatic extent of Israel’s water enclosures. This is the third part of a series by ENTITLE fellows on our experiences during the International Conference of Critical Geography in Palestine. Previous contributions can be found here and here.

The Palestinian town of Jericho with the Jordan River in the background. Photo by A. Huber

The Demise of the Dead Sea

As it enters the occupied Palestinian territories in the northeastern West Bank, the Jordan River has already lost more than half of its original flow. Much of it is diverted north of the Jordan Valley, by dams and infrastructure projects in Israel, Jordan and Syria. In the 1950s Israel’s ambitions to make the desert bloom led to the construction of the National Water Carrier, which from 1964 onward transported 500-600 million cubic metres of water from the Sea of Galilee to the Negev. Within the Jordan Valley excessive extraction of spring- and groundwater for exclusive use in Israeli settlements and plantations adds to falling groundwater levels and drying springs.

Nader Khateeb of Friends of the Earth Middle East estimates that today less than 50% of the Jordan’s original flow find its way to the Dead Sea, which is rapidly drying up: “It has been receding ever since 1967, in recent years on average one metre annually. While before 1967 the Jordan River used to carry about one 1300 million cubic metres of fresh water every year to the Dead Sea, today it receives less than 150-100 million cubic metres – 5-6% of its historic flow, and that too of very poor quality.”

The Dead Sea once used to reach to the steps of this deserted restaurant near Jericho. Photo by A. Huber

ENTITLE mentor Nader Khateeb (Friends of the Eaerth Middle East) is explaining the water situation in the Jordan Valley. Photo by A. Huber

The desert-like landscape of what is also called the “Jordan Rift Valley”, much of which lies below sea level, may at first sight not be a particularly desirable place to live or occupy. The heat at the height of the summer is excessive. And yet it is a highly strategic area. As the only non-Israeli foreign border (with Jordan) and potential exit/export route for Palestinian people and goods, it is a crucial border for Israel to control to advance its expansionist occupation project.

It is also one of the most agriculturally productive areas in the West Bank, making up 28.5% of production. With warmer temperatures, a year-round agricultural climate, abundant water supply and fertile land, the Jordan Valley used to be the “vegetable basket” for much of Palestine. But Israel’s grab of nearly 100% of the valley’s water resources and much of the arable land have severely limited the agricultural capacity of Palestinian farmers in the Jordan Valley, further compromising food security in Palestine.

Israeli date plantations in the Jordan Valley. Picture by A. Huber.

Water enclosures in the Jordan Valley

As Palestinians we don’t control the water. We’re not allowed to drill water wells deeper than 90 metres. If you drill deeper you can get fresh water, which is suitable for cultivation. We’re not even allowed to rehabilitate our old water wells without permission. But for the Israelis and the settlers there are no controls. (NGO worker from the Jordan Valley)

The Jordan River, which marks the border with Jordan, is off-limits to Palestinians. Water availability from other surface water resources, such as springs – the only water source available to Palestinians – has decreased too, as a result of Israeli over exploitation of water resources. Climate change and lack of rainfall further add to increasing water scarcity.

And yet Israel’s water policy cannot be justified with arguments of water scarcity. According to Nader, Israel has doubled its water resources recent investments in desalination facilities, actually producing a water surplus, and the ability to sell water to Palestinians through the national water company Mekorot. The reasons why Israel does not want to grant Palestine control over its own water resources – or much of the land – are clearly political, with disastrous consequences for Palestine’s economy.

We think that a water deal between Palestine and Israel could have been signed yesterday, as Israel does not need water. But because Israel would ask for something in return, something for the settlements, or giving up the right of return of refugees, it doesn’t happen. And the politics of the last 15 years has been either we agree on everything at once or nothing. That’s why everything is stuck. (N. Khateeb, Friends of the Earth Middle East)

What is left of the spring of Ras ‘Ein al ‘Auja, near its source. As there are repairs going on in the nearby Israeli water pump, this is more flow than usual. Photo by A. Huber.

Israeli water pump next to the spring of Ras ‘Ein al ‘Auja. Photo by A. Huber.

Control over water resources allows Israel to expand its own agricultural holdings, thereby fuelling the settlement economy, and consolidating its occupation of the West Bank and its most strategic areas. Water for Israeli agricultural industries in the Jordan Valley comes at almost no cost as the Israeli government subsidises over 50% of its price. Moreover, following the signing of the Oslo Accords in 1993, Israel gained control of 94% of the land in the Jordan Valley, which was declared as Area C (land under full Israeli control over security, planning and construction). Initially confiscated for military purposes, 50% of the land in the Jordan Valley has subsequently been transferred to settler families and industries (a population of less than 6,000). The remaining 44% of the land is declared to be either military zones or natural reserves. The roughly 60,000 Palestinians who live in the Jordan Valley control only 6% of the total land area, classified as Area B.

As a consequence, Palestinian farmers cannot compete. Due to the lack of access to water and land, and price dumping by Israel, Palestinian agriculture in the Jordan Valley (and much of the West Bank) is almost not viable. Israeli products are crowding out Palestinian ones on the Palestinian market. At the same time, Palestinians become a cheap labour force for the settlements, while their land slowly degrades. This in turn is used by Israel as a justification to confiscate Palestinian land and expand the settlements, on the grounds that it is not used by Palestinians, and that Israel can put the land to better use, by creating jobs and improving the local economy.

Nader Khateeb explains that recent studies have estimated Palestinian control over the land and resources of the Jordan Valley could create more than 100,000 jobs and increase the GDP of Palestine by more than 12-15%, 5 billion dollars per year.

New land concessions for plantations have been allocated to Israeli settlers in the ‘security’ buffer zone adjacent to the Jordan River (yellow area). Photo by A. Huber

The Bedouins – Marginalising the most marginalised

Among the communities that suffer most under the Israeli occupation of the Jordan Valley are the Bedouin communities, a population of 15,000, many of whom have migrated to the Jordan valley after the war in 1967. A recent plan by the Civil Administration, the Israeli military authority that implements the occupation in the West Bank, foresees the expulsion of Bedouin families from their communities, and their relocation in so-called ‘development towns’ near Jericho and Jerusalem. This plan is threatening the existence of 46 nomadic Bedouin communities and their traditional lifestyle, which is based on extensive land use through pastoral migration. Already today, the persistent seizure of land and water resources by the Israeli authorities for exclusive use by settlements is imposing harsh restrictions and criminalizing the movements of Bedouins and their cattle in search of scarce fodder and water for animals.

A Bedouin camp near Ras ‘Ein al ‘Auja. Photo by A. Huber.

Palestinians living in Area C are not allowed to build anything, including houses, schools, water and electricity connections, or communications facilities, among others, without permission from the Israeli administration – yet most of the requested permits are refused. As is the supply of even the most basic infrastructure services – water, electricity, medical services. The electricity wires installed above the Bedouin villages are for use by settlers only. Due to such restrictions on building activity and infrastructure, the Bedouins already precarious camp-like living arrangements are made even more precarious. This entrenches the poverty and vulnerability of the already marginalised Bedouin population, and enhances the impermanence of their livelihoods.

It doesn’t take much analysis or a conspiracy theory to understand the aims behind Israel’s settlement policy. The strategy by which the Jordan Valley, like much of the West Bank, and its resources are being occupied, was clearly spelled out by Ariel Sharon himself, during a speech in 1988: “You don’t simply bundle people onto trucks and drive them away. I prefer a more positive policy. To create in effect a condition that in a positive way will induce people to leave.”

* More information on the occupation of the Jordan Valley, development projects and civil society initiatives of solidarity and resistance can be found among others from the following organizations: The Jordan Valley Solidarity Group, MA’AN Development Center, and Friends of the Earth Middle East.