The Anthropocene debate: Why is such a useful concept starting to fall apart?

Solidarity needed: Stopping the eviction of the PAH's BlocLaBordeta in Barcelona 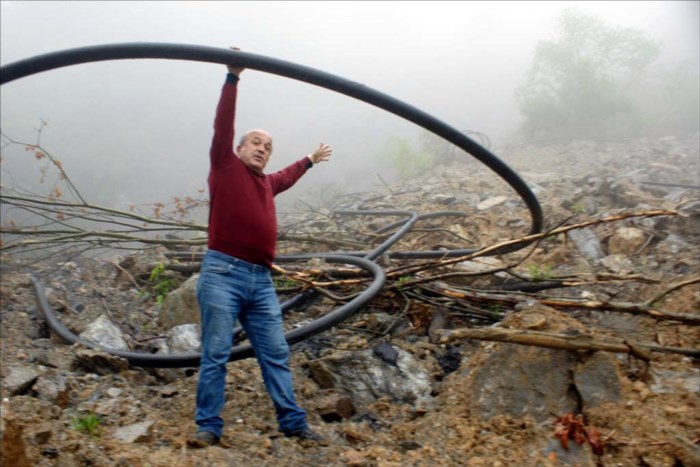 Sapanca, a case which clearly illustrates how the water that should be primarily used for basic human needs falls prey to economic activities of industry; including bottled water.

A landslide hazard on 30 May 2015 in the Lake Sapanca basin revealed the uncomfortable truth about the scale of illegal water grabbing in Turkey. Hundreds of buried pipes used by various water bottling companies for illegal extraction of water from Lake Sapanca were laid bare. However, the problem of water grabbing in Sapanca is neither new, nor limited to illegal water extraction. Not only water bottling plants have been grabbing both Sapanca’s water and the rivers that feed it for two decades; also industrial organizations such as the Turkish Petroleum Refineries Corporation (TUPRAS) have been legally drawing excessive amounts of water from the lake. In addition to growing water demand from these sectors, the drought last year put people’s drinking water at risk. Sapanca is a case which clearly illustrates how water that should be primarily used for household consumption (basic human needs such as drinking, cooking and cleaning) falls prey to industrial economic activities.

Sapanca is a fresh water lake with a catchment area of 251 km2. It is fed by 18 rivers and water sources within the lake. Sapanca used to be one of the few lakes in the world that provided potable water without any treatment. Surrounded by the metropolitan municipalities Kocaeli, with a population over 1.7 million, and Sakarya,  with almost 1 million people, Lake Sapanca is today under growing pressures of heavy urbanization and industrial expansion. The droughts that hit the area every 4-5 years make the situation even worse. Last year, the water level in the lake dropped to a critical level of 29.90 meters, as a result of which water in the lake got highly contaminated.

Lake Sapanca’s water is known for supplying some of the best quality drinking water in Turkey. Water bottling plants have therefore historically accumulated in this area. Today there are 16 water bottling companies, 11 of which are public enterprises. These companies have legal permission to extract 1 million m3/year of Sapanca’s water (equal to one percent of the total water drawn from the lake), yet actual withdrawals by water bottling plants are estimated to be at least 5 times higher. Other common methods  used by the companies to grab water is to open illegal wells, or to draw water from rivers that feed the lake. Monitoring of such activities does not take place on a regular basis and penalty fines are relatively low, considering the damage they cause.

The Sapanca basin is an industrialized area. TUPRAS is one of the main industrial organizations based near the lake. As a state-owned company TUPRAS got free water from Sapanca. When it was privatized in 2006, TUPRAS retained the privilege to extract lake water free of charge. However, during a year of drought, when the water level decreased as a result of low precipitation, unpaid for water extraction by TUPRAS became a public point of controversy. TUPRAS officials indicated that the company had signed an agreement with the Kocaeli metropolitan municipality in 2008, to finance investments for environmental protection  in the basin, and that it had pay 18 million Turkish Liras until February 2014. Yet this amount is disproportionally small when considering the amount of water used in 6 years.

Problems with Sapanca are not limited to water bottling plants and industry. The Lake has a capacity of 136 million m3 of potable water per year. 100 million of it go to household and other uses. The two metropolitan municipalities together have a population of 2.7 million. The household water use of Sakarya is met entirely from this lake, while Kocaeli has another water source: the Yuvacık Dam. However, last year the Yuvacik dam failed to meet Kocaeli’s water needs and had to be fed with water taken from Sapanca Lake. Another issue is that these municipalities use the potable water of the lake for the irrigation of parks, traffic islands, roundabouts and other urban green spaces. The grass covering these spaces requires excessive amounts of water, and the irrigation technique used  causes tons of potable water to be wasted.

Sapanca is not the only case of water grabbing in Turkey. In fact, this phenomenon has many forms, such as in Bickidere (Sakarya) where both a thermal water spa hotel and a water bottling factory grabbed the communities’ water, while a copper mining company contaminated the groundwater. Another case is Alasehir (Manisa) where natural water springs were leased to a private company for the next 30 years without informing the public. Yet another example is the Ilisu Dam, which will inundate around 200 villages and towns, including 12,000 year ancient city of Hasankeyf, while leaving the Ilisu village completely dry.

What should we use water primarily for?

All these examples of water grabbing beg for the question what should we use water primarily for? In countries such as Turkey, where water grabbing has been a serious public concern, the priority of water use is not well-defined. The draft Water Law in Turkey, which has been on the public agenda since 2012 is a clear example. It considers  all uses of water (industry, intensive agriculture, domestic, etc.) as equally important. However, in practice, as the Sapanca example shows, when domestic water use and subsistence agriculture are not given priority, they end up falling prey to more powerful economic sectors. Yet life on earth cannot be sustained without securing drinking water.

The global struggle for reclaiming our commons: Water for all!

The World Social Forum 2015 in Tunisia made it clear that people all around the world suffer from similar examples of water and land grabbing. This is why there is a need for global convergence for a common struggle. The ‘Dakar to Tunis’ Declaration of the Global Convergence of Land and Water Struggles (Tunis, 28 March 2015) made a call for all activists, concerned citizens and governments to come together for reclaiming our commons: land and water. The declaration underlines that water, land and seeds are basic human rights, and not services or goods to be bought or sold.  They are commons, not commodities. With the Committee on the Environment of the European Parliament voting for the recognition of water as human right on 25th June this year, we might be a step closer to reclaiming our water commons, but the global struggle for reclaiming the water commons must continue. Water must be used primarily for life, and people should be put before profits.

*Akgün Iİhan holds a BSc. in Landscape Architecture from Ankara University (Turkey), an MA in International Environmental Science from Lund University (Sweden), and a Ph.D. in Political Ecology from the Universitat Autònoma de Barcelona (Spain). Her doctoral research was about social learning and movements in sustainability transition in the water domain in both Spain and Turkey. She is the author of Towards a New Water Policy: Water Management, Alternatives and Recommendations (2011), which was published in Turkish. Akgün has represented the Initiative to Keep Hasankeyf Alive – a social platform that defends the rights of local people to be affected by the Ilısu Dam on both national and international platforms. She is an activist with the “Right to Water Campaign” based in Istanbul since 2010, and moderates a radio program called Right to Water (Open Radio) since 2012.