Chronicles from an eternal present. A review of "Critiquer Foucault", edited by Daniel Zamora (I) 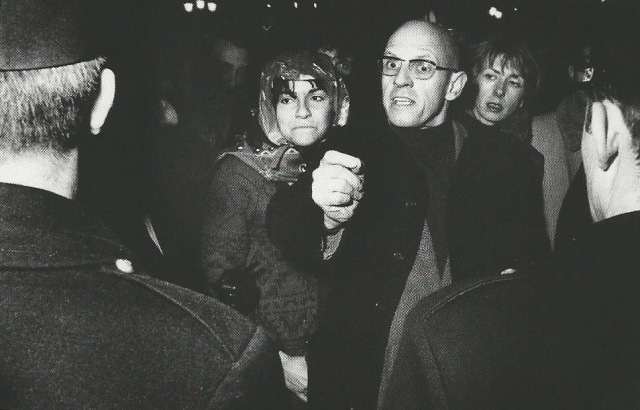 “Adieu au proletariat was not a critique of communism, quite the contrary. I was criticizing Maoists and their primitivist cult of a mythical proletariat, their pretentious idea of practicing the strategy of land conquest as invented by Mao for Chinese peasants in an industrialized and urbanized country. It was also an immature critique of capitalist social-democratization – to which vulgar Marxism was reduced – and of the glorification of waged labor. ‘Beyond Socialism’ – such was the book subtitle – there is communism which is its fulfillment. Alternatively – if there is no communism – we have our current, disgusting situation. But communism is neither full employment nor wage for all; it is the elimination of labor in the socially and historically specific form it assumes under capitalism, namely labor-employment, labor-commodity”.

In other words, theories as well as practices of self-management are critical of a certain Marxism exactly because it is perceived as an obstacle to social struggles. It is possible to conflate self-management onto free trade, as both Behrent and Zamora do, only under the condition of abstracting the former from its proper context to subsequently inscribe it on our present, marked as it is by the domination of the latter – a tangible proof of the defeat of a cycle of conflicts which was traversed also by self-managerial instances. A failure, however, does not erase a complex and articulated historical process: it is not only a matter of elaborating a correct analytical framework, but also of politically re-appropriating fragments of the past in order to reactivate them in our contemporaneity, to think and organize resistance against an unfettered neoliberalism. Gorz himself, in an essay titled Ecology and Freedom (1977), conceived of self-management a convergence point between conflicts for the liberation from hetero-directed labor and ecological movements. Given the elective affinities which link economic and environmental crises, my impression is that such a connection is all but irrelevant for the struggles we fight, here and now.
* Emanuele Leonardi  is a Post-Doc Researcher at the Center for Social Studies of the University of Coimbra (CES/UC). His research interests include the intersection between the Foucauldian notion of biopolitics and the field of political ecology, the financialisation of the environmental crisis, carbon trading and climate justice movements, and job blackmail and working-class environmentalism.
**The Italian version of this review has been published on the international journal Materiali Foucaultiani and is freely available online. Many thanks to Yari Lanci for revising the English translation.

Leave a Reply to Chronicles from an eternal present. A review of “Critiquer Foucault”, edited by Daniel Zamora (I) | ENTITLE blog Cancel reply