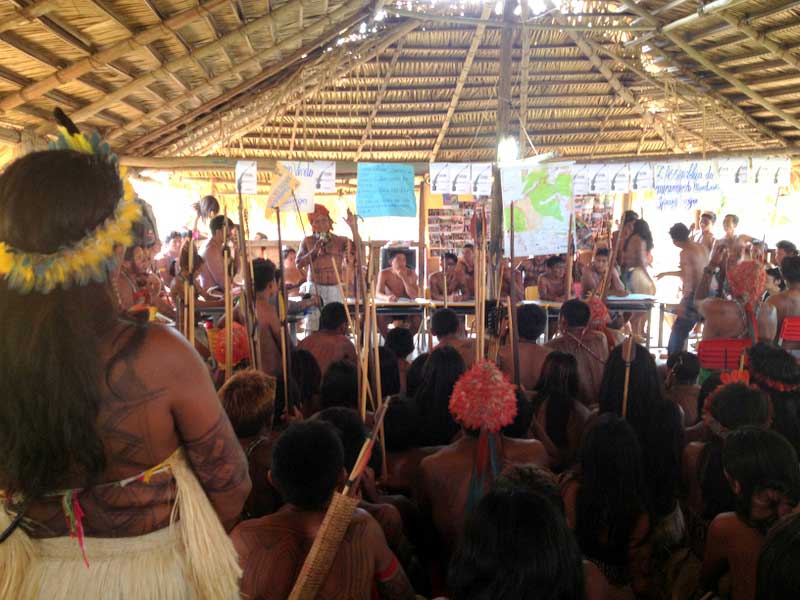 International conventions, in particular the International Labor Organisation Convention 169 (ILO169), establish that local communities should be consulted when a planned project will affect their territory. Consultation with indigenous peoples, as written in Article 6, should be undertaken through appropriate procedures, in good faith, and through the representative institutions of these peoples. This statement is followed by the article 7 that protects their right to “decide their own priorities for the process of development as it affects their lives, beliefs, institutions and spiritual well-being and the lands they occupy or otherwise use, and to exercise control over their economic, social and cultural development”.
This is quite easy to understand: “we” are planning a project and therefore “we” must consult “those” impacted by the project before proceeding. This is especially relevant when the project could destroy the means of subsistence and have a direct impact on the territory and resources that “the community” – the “other” – needs to survive. And let’s take it seriously: an effective consultation, following ILO169, is one in which those concerned have an opportunity to influence the decision-making process.
This basic standard through which modern business should be conducted did not come about by chance, or because investors are kind. It resulted from social struggle. It is premised upon the violence and brutality that occurred in the past. Genocide. Ethnocide. Destruction. Extermination. Various forms of violence were inflicted against vulnerable populations. This happened all over the world: in China, in India, in Asia, in Africa, in the US, in Canada, in Europe, and in Latin America.
Decolonisation, as states Eve Tuck and Wayne Yang (thanks my friend Silvia Rodriguez Maeso who introduced me to this paper), “is not a metaphor”, but, as they argue, offers a different perspective to human and civil rights based approaches to justice:  “Decolonisation is accountable to Indigenous sovereignty and futurity.”
Looking to the past to review how we arrived at this point, we could start with the process of colonisation. There was a huge debate within the Spanish Crown concerning what to do with the indigenous people who occupied the continent they believed to have “discovered”. We could say that this was the first time a sort of capitalistic “consultation process” took place.
The debate between Bartolomé de Las Casas and Ginés de Sepúlveda, known as the “Valladolid Debate”, posed the central question on the Just War against Indians, the use of violence, the legitimacy of the war and the conquest of their lands by the Spanish Crown. While Las casas defended Indians from the war, Sepúlveda sought to justify brutality towards indigenous peoples through the Requerimiento. Indians were seen, in Sepulveda’s vision, as criminals against natural law, and violence was necessary to be used against them, to conquer their souls and territory. But, following a sort of authoritarian “consultation process”, the Requerimiento, this meant that before slashing and conquering and enslaving, the Spanish military would read a requisition to the Indians, who understood nothing. Sylvia Wynter explains, it was “a hybridly theologico-juridical document, written in Latin, supposed to be read out to indigenous group by a notary”. This was done to make sure the Indians were “aware” of the situation:

The document proclaimed to the indigenes that Christ, who was king over the world, had granted this sovereignty to the pope, who had in turn granted the lands of their “barbarous nations” to the king of Spain, who had sent the expedition members as his emissaries. The expeditionaries had been sent to give the indigenes the choice of accepting the King of Spain’s sovereignty over their lands, together with their acceptance of Christ’s Word and, with it, of conversion to Christianity. If they accepted the king’s sovereignty together with conversion, they would be unharmed. Should they refuse (thereby making themselves Christ-Refusers and Enemies-of-Christ), they would be attacked, captured, justly enslaved—their lands justly expropriated.” (excerpt from: Unsettling the Coloniality of Being/Power/Truth/Freedom by Sylvia Wynter)

According to Rolena Adorno, the Requerimento was a sort of “war ultimatum” that the Spanish colonisers, “on behalf of the King and the Queen, subjugators of barbarous peoples,” had to read to the Indians. The document demanded that they recognise and subjugate themselves to the Spanish Crown’s sovereignty and the Church and Pope’s authority. If there was no opposition, they could remain free in their lands — although the lands would belong to the king. Otherwise, they would be killed and enslaved. This was a sort of legitimisation of the colonial violence. No matter the real will of the Indians, just to legitimise the colonial project. Decolonise this process, and so, take very seriously the opinion of the groups affected, as writes Tuck and Yang, should not be seen as a metaphor.
I raise this example because it was during this time that modern racism was created with the slavery, along with colonialism and the expansion of capitalism. As such, the expansion of capitalism may employ these two forms of domination to justify and legitimise its needs: (neo)colonialism and racism. Therefore, international agreements like ILO169 are supposedly enshrined with a post-colonial mentality. They are meant to provide legal protection over this dark past.
During Brazil’s Military Dictatorship (1964-1985), Indians were the victims of the economic miracle. According to a report published by Brazil’s National Truth Commission last December, at least 8,000 Indians were killed during this period. Many of these killings were due to indigenous resistance to infrastructure projects such as roads and dams. That is one of the reasons why the Brazilian Constitution of 1988 enshrines the right to protected indigenous territories, and why the country signed ILO169. One of the worst examples surrounds the construction of the Balbina hydroelectric dam, which flooded at least three of the Waimiri Atroari’s villages. It is estimated that 2,000 Waimiri were killed during this period, during which they also had their territory segmented by a road and occupied by a mining company.
And today, yet again, Brazil’s dam projects target indigenous lands, threatening to not only to directly affect three Munduruku villages – Dace Watpu, Sawré Maybú and Karu Bamaybú – but to displace them entirely.
The Brazilian Constitution forbids the displacement of any indigenous group from their territory, unless in case of a natural disaster, and within this scenario Congress must approve this displacement and guarantee that the displaced people be allowed to return to their lands as soon as possible (Article 231). Additionally, any local group – whether indigenous or traditional populations like rubber tappers – that will have their territory and life affected by any project, especially by hydroelectric dams, must be consulted before the project is approved (Article 231, paragraph 3).
But how?
Although Brazil is a signatory to ILO169, there is no formal procedure to ensure this consultation process. Should consultation take place through the Old Spanish method of Requerimiento, the Requisition, allowing the “just war” to bring legitimacy to the mega-project as defended by Ginés de Sepúlveda?
Or could we follow a post colonial system, based on respect for the law and for the rights of humans and nature, by sincerely informing and listening to the ones who could be affected?
Brazil is planning dozens of dams in the Amazon basin, such as Belo Monte, on the Xingu River. The newest case is the São Luiz do Tapajós mega-dam, which could directly affect the Munduruku and riverine communities. The Munduruku have demanded to be consulted, recently publishing a protocol that stipulates how a consultation should take place.
Jairo Saw, a Munduruku teacher, wrote a letter to Brazilian and international civil society last year, in which he states:

White man invaded our land, many of our relatives were slaughtered, murdered, tortured and used in forced labour, serving as slaves. They call us lazy because we don’t destroy as much as them! (…) Now the “civilised” write laws and do not respect them. They use the power to oppress people who they think have less knowledge than them. They do not recognise our rights. The right is only given to wealthy individuals or upper class with more economic power! (…) We are treated as obstacles to development. But we are not against development, what we want is to be respected and have our rights as indigenous people recognised.

The Munduruku Protocol on consultation procedures, published couple of weeks ago and presented to the Brazilian government, is the first protocol of a consultation process proposed by an indigenous nation that I have ever seen. It is very well written, closely following international and national law.

The Munduruku are very clear and precise on what should be done: they must be taken seriously.