Making ourselves indigenous: on conservation ethics and the commons 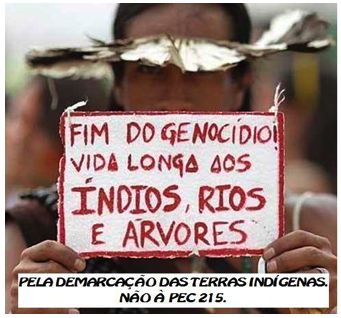 Stop the genocide! Long live the Indios, rivers and trees

Stop the genocide! Long live the Indios, rivers and trees

Last October, the journal Environmental History published a special section to commemorate 50 years of the USA Wilderness Protection Act (3 September 1964), and organized an online forum with commentaries by seven scholars. Though not an expert in the history of natural parks, I welcomed this opportunity to discuss some key ideas of the debate informing environmental politics and ethics more in general.

In his opening piece, ‘The higher altruism’, renowned environmental historian Donald Worster argues that ‘the moral vision behind nature conservation (aka preservation) is getting squeezed to the margins’ of the political debate in the USA, where utilitarian reasons prevail both on the Right and on the Left. Albeit humans have a right ‘to appropriate enough resources to live in modest numbers and with modest consumption’, he writes, the real question about preservation is ‘how far can we or should we go in protecting the autonomy of life beyond people?’ Worster suggests that an international court might be created and ‘charged with distributing fairly the costs of preserving the world’s wild places and threatened habitats’.

The language of ‘altruism’ recalled in Worster’s article has been widely used to critique ‘tragedy of the commons’ thinking, especially through Elinor Ostrom’s work and that of the common property school. Scholars have demonstrated that humans are capable of seeing nature as a common resource to protect. But a higher altruism, Worster tells us, would be that of protecting non-domesticated species and their habitat for their own sake. Give them a chance to survive us – one might say. This is a contested proposition, as the debate in the EH forum has shown. What is more controversial is not the idea of protecting some form of life for its own sake – which is of course legitimate – but the correlated aspects: what to protect, from what, and from whom? If the alternative is between a natural park and oil drilling, as in the Yasuni case of Ecuador, then the stakes are clearly defined as good vs evil. But things are often more complex than this. Fossil capitalism does not represent humanity. Peasant, fishing, and indigenous communities have lived on and from ‘wild’ areas for millennia. Millions of rural people have demonstrated to be capable of caring for and protecting their land from ‘development’, if only given a chance. People are not as Garrett Hardin depicted them in his infamous article – which so many conservationists are still eager to assume as a valid scientific argument.

This awareness has been around for a long time, and in fact, as the second article in the debate, by Emily Wakild, points out, in the Latin American context conservation and justice have been historically articulated in several ways. After 50 years of experimentation, she argues, protecting nature now appears to be much more connected with protecting humans and their cultures. We don’t need a special international court with the power of deciding over national conservation policies, she argues, for each country has had its ‘cadre of politicians as well as able and eager bureaucrats and technicians committed to conservation. Denying the national autonomy and the individual agency to develop park systems reinforces and perpetuates a perceived power differential between the West and the rest.’

The Brazilian Amazon’s “extractive reserves” (RESEX) come to mind as a relevant example of conservation cum social justice experiences originated in Latin America. Passed into law in 1994, the RESEX are protected areas destined to preserve both the forest and the people who live in and of it. The “extractive reserve” idea was inspired, on one hand, by indigenous people’s relationship with the land and, on the other hand, by the 1988 Brazilian Constitution that acknowledges and protects “traditional” populations’ rights to their ancestral lands. The RESEX put together the defense of different non-capitalist forms of the work/nature relationship: collective use rights (as opposed to individual property rights); land-based cultural identity and livelihoods (as opposed to forest encroachment and forced evictions); and wild-fruit gathering and biodiversity conservation (as opposed to monoculture and resource exploitation). In all cases, the forest gets to be preserved not as a place for leisure or for scientific investigation, but as a place for working and living—indeed, as what allows the local human communities to survive and maintain their culture. The extractivistas (rubber tappers but also wild fruit gatherers and fishers) are those who actively protect the forest from encroachment and destruction; the forest needs those people as much as the people need the forest.

It is important to remember, however, that the RESEX institution did not come out of enlightened bureaucrats and governmental agencies, but out of people’s willingness to fight and even die to protect the forest from which they and their way of life depended. It became law after many years of struggle of the rubber tappers’ movement and the assassination of several of its members, including their founder Francisco ‘Chico’ Mendes in 1988. And today’s extractive reserves continue to be threatened by opposing forces representing powerful economic interests, often strongly backed up by governmental politics. Depicting ‘humans’ as the natural enemies of wilderness, with the exception of a few enlightened experts, is thus irrespective of the history and struggles of the many indigenous and peasant communities that have long fought to protect the ecological integrity and sustainable use of their lands, while being victims of enclosures and ‘improvements’ – a neverending historical process that four decades of global neo-liberal politics and trade have reinvigorated.

What could help, I think, is to (re)introduce the idea of the commons in our minds, de-colonizing them from mainstream political-economic and much of conservationist narratives. I would call it a process of intellectual re-commoning. The aim, clearly, must not be that of romanticizing and reproducing past social arrangements over nature, such as those of peasant economies under feudalism. Rather, we should remember that people have for millennia co-evolved with and taken care of the land – until western colonization and a variety of State-led high modernist schemes came about.

The third article in the EH forum, by Libby Robin, is of great interest in this respect. The author reminds us that non-Anglophone cultures have different ways of conceptualizing nature conservation and ‘wilderness’: Aboriginal peoples, for example, use the word Country to signify ‘nourishing terrains, evoking the idea of places that care for people and where people reciprocate that care. Country is not land to be owned and transacted through a market system. Country owns a person and is part of personhood’. Conversely, Wilderness for them ‘means Country that has lost its stories, that has not been cared for with fire’.

I believe that similar ideas can also be found in most peasant cultures elsewhere: one example that comes to mind is that of the Galician forest commons, the Montes Vizinhais, which local people understand as ‘not that which belongs to us, but that to which we belong’. A new conservation ethic could thus be based on the search for current and possibly future ways of belonging to the non-human natural world. Far from an archaic and marginal reality, the commons should be seen as the way forward. But this would require challenging mainstream ideas of individual freedom, as well as moral dichotomies between altruism and utilitarianism, and making ourselves indigenous to the worlds we inhabit.

It is not by chance that Indigenous peoples of different Nations are – and have been for decades now – at the forefront of struggles to defend that global commons which is the Earth. They have shown an extraordinary capacity for resilience, against genocide, ecocide, and cultural annihilation, and are still talking to ‘us’ about how we belong to Country, the Pachamama, or the commons, and not viceversa. Perhaps it is time for the rest of us to take them seriously.

*This guest post is by Professor Stefania Barca, a mentor of the ENTITLE Network, and Environmental Historian from the Center for Social Studies at the University of Coimbra (Portugal). Her post argues that “Depicting ‘humans’ as the natural enemies of ‘wilderness’ (an exclusively Anglo-Saxon concept) is irrespective of the history and struggles of many indigenous and peasant cultures. Conservation politics should be de-colonized and informed to an ethics of the commons intended as ‘that to which we belong’”.