By Bram Büscher and Rosaleen Duffy.

The big biodiversity conference in Montreal from 7-19 December was described as the event that will decide on the ‘fate of the entire living world’. Its outcome to protect 30% of the planet by 2030 is regarded by some as ‘historic’, but in reality promotes more business-as-usual. Have global environmental meetings reached the end of their usefulness? Or is hanging on to them worth it in the face of worsening environmental crises?

These are busy times for conference-of-parties-goers: the traveling circus of policymakers, researchers, activists, lobbyists, and many others that attend major global environmental meetings. In November 2022 alone, we had the Climate Conference-of-Parties (CoP) in Egypt, the Convention on International Trade in Endangered Species (CITES) CoP in Panama and the Ramsar wetland CoP in China and Switzerland. Last month, the circus was in Montreal, Canada for the Biodiversity CoP. Despite difficult progress, the conference was finally hailed as a ‘paradigm-changing’,‘once-in-a-decade’ deal that will bend the curve of biodiversity loss and lead to a ‘nature-positive’ society.

Given the current state of multilateralism, coming to a deal at all seems a major achievement. But how hopeful should we be that this will change the fate of many species on the planet? How paradigm-changing is this deal really? Looking at the history of conservation as well as the actual impact of global environmental meetings, we should not be too hopeful. In fact, we argue that this deal may signal the end of the usefulness of global environmental meetings altogether.

Let’s first look at the history of conservation. More protected areas may be hailed as historic and paradigm-changing. But if there is anything that defines the history of mainstream conservation it is precisely the steady rise of protected areas over the last decades: from about 2% of the globe in the 1960s to around 17% now. And this progress was incredibly difficult and contentious, to put it mildly, leading to many ineffective ‘paper parks’. Worse still: it led to major human rights abuses and even increasing acts of ‘green violence’ to ensure adequate ‘protection’.

The recent Kunming-Montreal deal now states that we have to move to 30% in just eight years. But if it took 60 years to get from two to 18% of the planet protected, how realistic is this target? And how will it, despite the rhetoric to place indigenous peoples at the centre of conservation, ensure that the violent mistakes of the past are not repeated? All this is, as usual, left to ‘implementation’. Given the pressures of the extinction crisis and the highly problematic recent wave of militarised protection of protected areas, we have little faith that history will now suddenly work out very differently than it has over the past decades.

But even if this 30×30 miracle unfolds, how effective will it be to address the extinction crisis? Again, history does not give much hope. It shows us that the proliferation of protected areas across the globe happened at the exact same time as the intensification of the extinction crisis. Why, then, should this most recent enlargement of global protected areas have any different outcomes?

Perhaps it can be said that without these conservation efforts, things could have been even worse. But this is hardly something to celebrate. It could equally be argued that mainstream protected area efforts have blinded us from the true causes of the biodiversity crisis and that, as a result, we are less well equipped to deal with them than we might be otherwise. 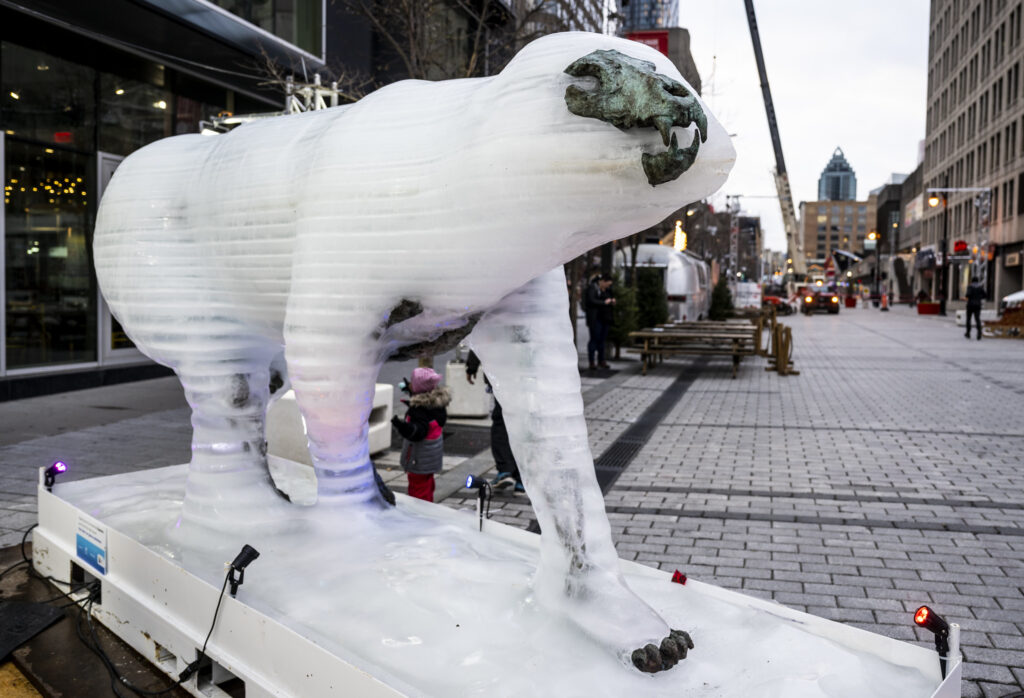 Clearly, the transboundary and planetary scale of negative environmental change requires cooperation at all levels, including the global. Hence the emergence of post-World War Two multilateralism, and its younger sibling: post-Cold War global governance. In this wider historical context, global conventions developed out of a sense of hopefulness. The meetings they organised where seen to serve a bigger purpose and held some promise. We may remember the positive outcomes of the 1987 Montreal protocol when it comes to closing the hole in the ozone layer. Or the CITES ivory ban, which in part succeeded to reduce pressure on African elephants since 1989.

But that time is now over. CoPs seem to have become little more than traveling circuses filled with desperate hopes but no meaningful real-world impact. Their core is comprised of increasingly trivial language games, empty promises and inward-looking nondecisions – many about the functioning of the convention itself. Clearly, CoPs themselves and the actors that depend on their success argue differently. After every CoP, small and sometimes major wins are celebrated as the breakthrough the world has been waiting for. But what have they actually done for the problems they are supposed to address? 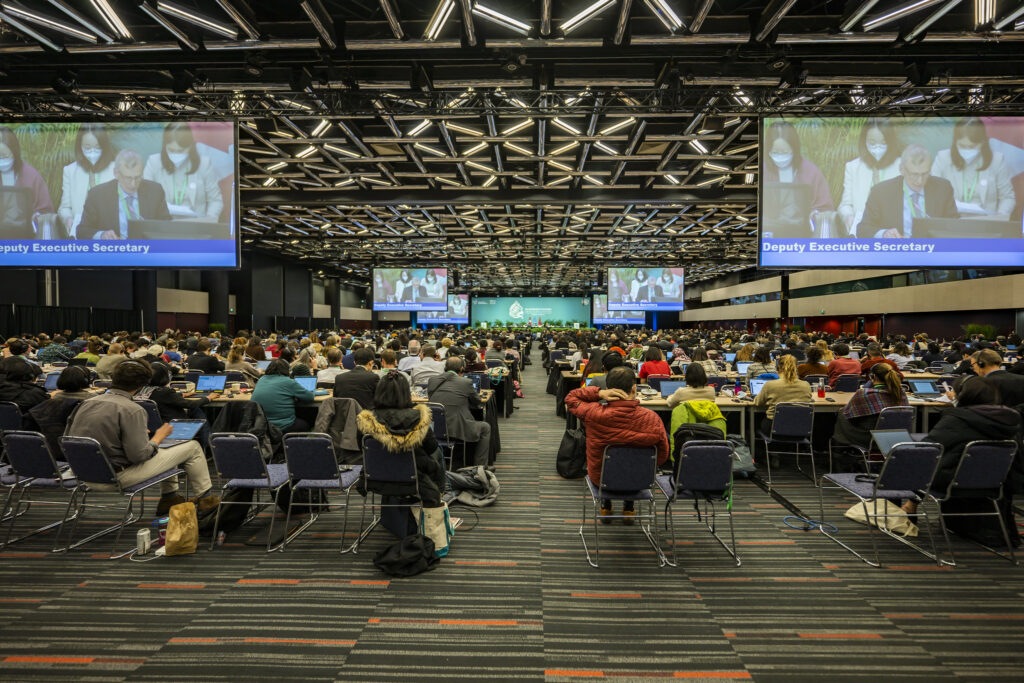 Let’s look at the two most important ones: climate and biodiversity. The sad conclusion is that CoPs have not only failed in their own terms, but that climate change and biodiversity loss have accelerated over the past decades. Even worse: we must conclude that the regimes have been part of the problem rather than the solution. The UNFCCC (United Nations Framework Convention on Climate Change) and CBD (Convention on Biological Diversity) have overseen an irresponsible and highly environmentally damaging process of distracting from the difficult and transformative work that needs to be done to create a genuinely sustainable world. They have been central to continuing business as usual and upholding a fundamentally unsustainable capitalist order. We should, of course, not be surprised if we look back over the history of multilateralism and then global environmental governance: upholding the existing capitalist order was (and is) its purpose. And so, the dire results are as expected.

Regarding climate change, a stark image recently made the rounds on social media (see Figure 1). It shows that from the 1960s all major global accords have made no difference in even slowing down rising levels of CO2 emissions. The latest CoP in Sharm-el-sheik, Egypt, is widely regarded as a failure also. Incredible as it may sound, it was already very difficult to, for the first time, even mention fossil fuels in the decision text. 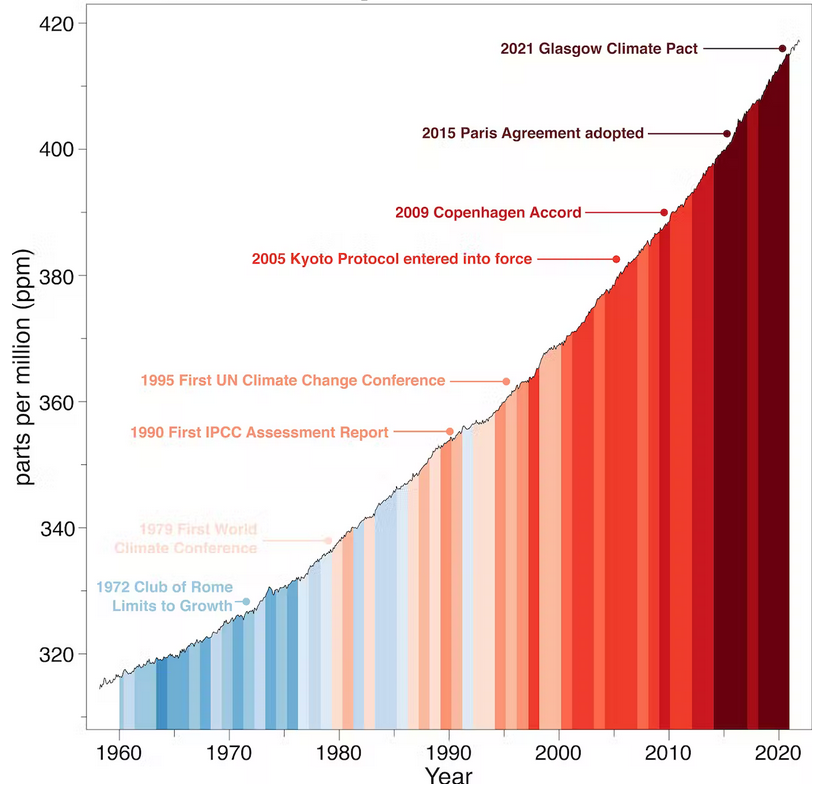 They are in the text now. But that is hardly a breakthrough. The parties could only agree on a vague call for “accelerating efforts towards the phasedown of unabated coal power and phase-out of inefficient fossil fuel subsidies”. The current efforts that need to be accelerated, however, are hardly worth mentioning. Cynically this line could also be interpreted that slightly-less-unabated coal power and efficient fossil fuel subsidies are all ok. Even the fund for compensating poorer countries for climate damage, widely described as ‘historic’, has no concrete teeth for implementation.

A similar picture arises for biodiversity. Yes, the CBD has put the importance of biodiversity on the global map. But as mentioned, it has done little to halt the global extinction crisis from rapidly getting out of the hand over the last decades. A key problem lies in the CBD’s origin story. In Rio in 1992, it was decided to split climate change and biodiversity across two conventions – fundamentally placing them on two different tracks when they need to be addressed together. It was also decided to turn biodiversity, especially genetic resources, into ‘natural capital’ that could be traded internationally. This further entrenched capitalist ways of thinking about the environment and thus the logic that is the problem in the first place.

The outputs of the current biodiversity CoP are in line with this same logic. The main results are around ‘Nature-Based Solutions’ that do not tackle the root causes of biodiversity loss, nor tell us how we can build an economy that accepts ecosystemic limits to destructive growth. Several new slogans around 30×30 have arisen – Nature Positive, Net Zero, Nature Based Solutions – but none of them think outside of the capitalist box. Indeed, no structural, systemic changes to the current system are even mentioned in the deal. 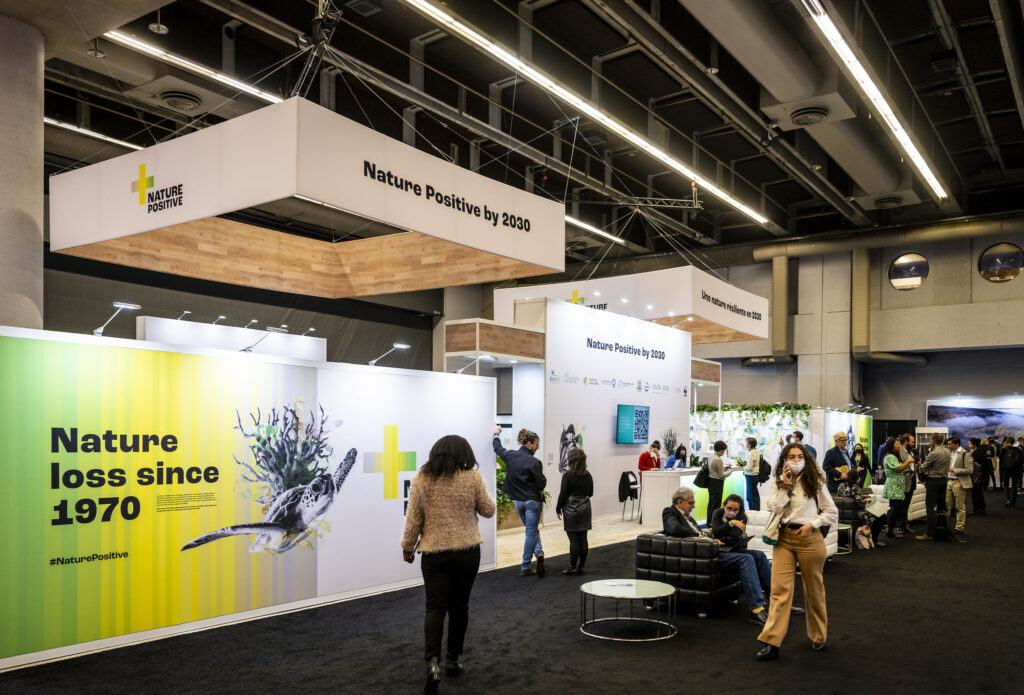 Global environmental treaties are thus far from transformative. They have tinkered around the edges at best; at worst they have dragged us deeper into an unsustainable system that makes things worse. There is, we argue, a solid case to be made that they have actually facilitated and deepened ongoing environmental destruction – by making us think environmental change can be tackled without challenging a deeply unsustainable global economic system, via carbon offsets, biodiversity credits, No Net Loss, geoengineering, genetic engineering and other non-solutions.

More protected areas may save some ecosystems and species in the coming years. But given their actual historical inability to prevent the sixth extinction crisis, we think there is little hope that things will suddenly turn out very differently in the coming years. We may still celebrate the fact that the international community came to an agreement. But high expectations, major promises and negligible actual impact has become the hallmark of global environmental meetings.

Going forward, this raises some pertinent questions: are global environmental meetings increasingly becoming empty institutional hangovers of a lingering status quo that we desperately need to move beyond? Or is holding on to some last shreds of increasingly strained multilateralism worth the effort, even if in the bigger picture they are becoming little more than extravagant witnesses of the road towards environmental disaster? 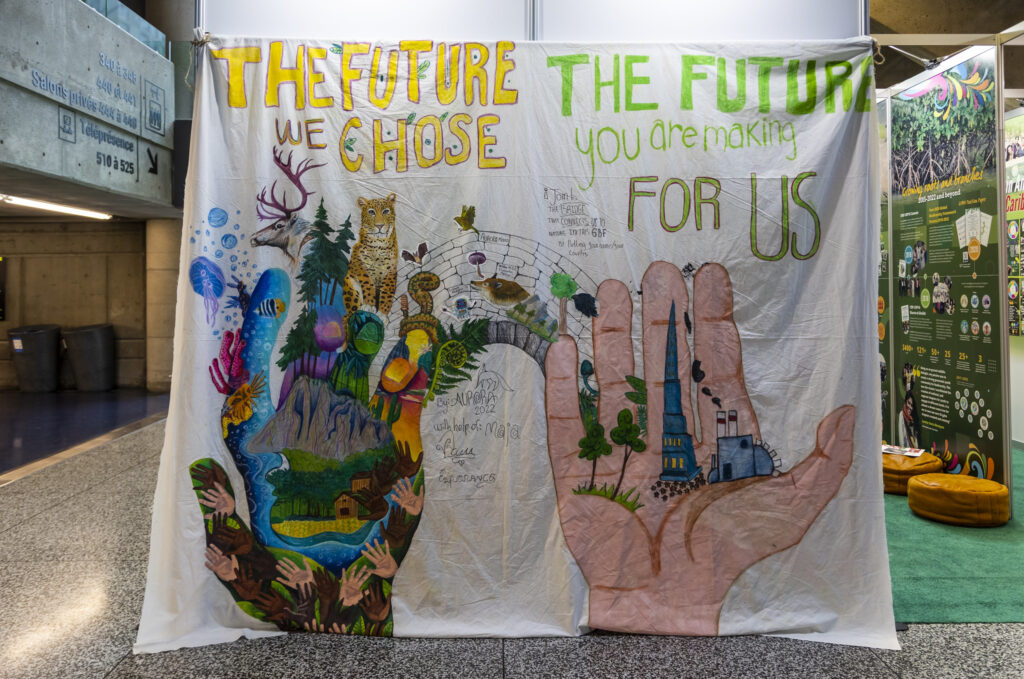 Bram Büscher is Professor and Chair at the Sociology of Development and Change Group at Wageningen University and visiting professor at the University of Johannesburg. His most recent book The Truth about Nature. Evironmentalism in the Era of Post-truth Politics and Platform Capitalism was published by University of California Press.

Rosaleen Duffy is Professor of International Politics at the Department of Politics and International Relations at the University of Sheffield. She is the author, most recently, of Security and Conservation. The Politics of the Illegal Wildlife Trade, published by Yale University Press.

A shorter version of this piece has been published by The Conversation. 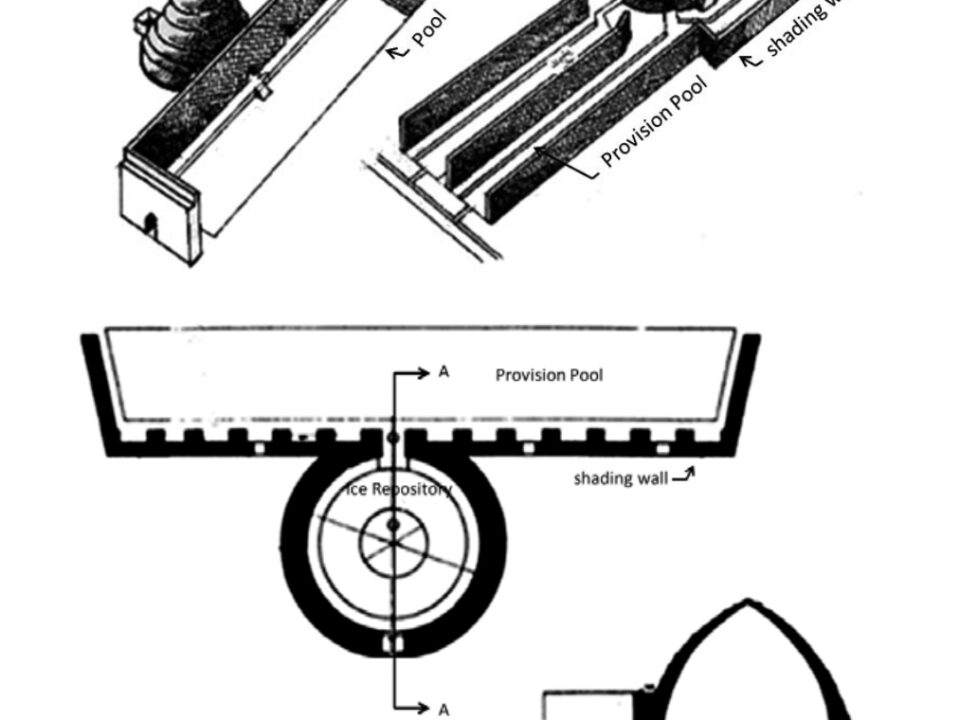