The unequal university will never be ‘sustainable’

Exposing eco-nationalists with premodern ecologies: a medievalist approach to the French far right 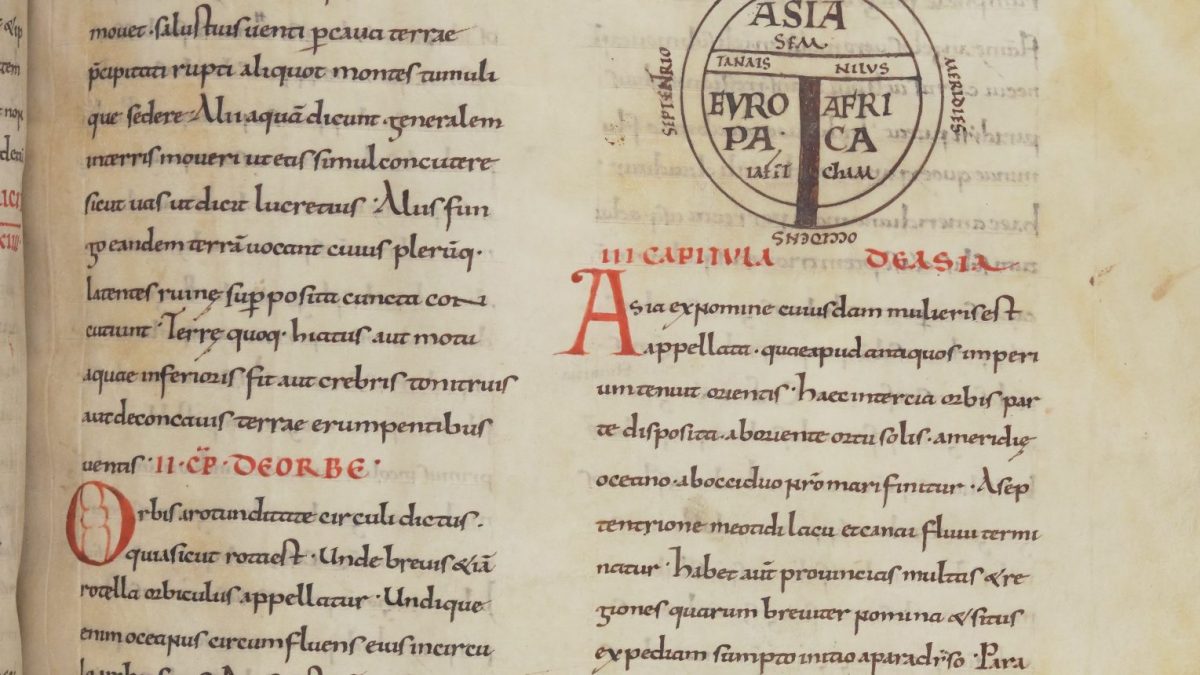 Scratching the surface of contemporary French far-right manifestos, we find superficial reproduction of medieval ideas about geographical bio-determinism and ethnic identification with nature. Ironically, when theorizing their version of “patriotic ecologies”, the far-right steps into a tradition that says exactly the opposite of what they would like to say: in relation to the environment, all humans are migrants.

What can medieval literature teach us about the exploitation of environmentalism in today’s far-right discourse? Because of their distance from the present day, pre-modern texts allow us to take a step back from the urgency of these matters and our own personal implication in them, to learn how we, as humans, use language and ideas about nature to deal with territories, group identity, political authority, oppression, resistance. Contemporary eco-nationalism identifies the natural environment with nation, and often equates nature preservation with a “nativist sentiment” and a fantasy of ancestral ethnic purity. The statements of French eco-nationalists, in particular, capitalize on the identification between nature preservation and control over a territory enclosed by national frontiers.

Eco-nationalism is a type of ideology that identifies the natural environment with the nation, and often links the preservation of nature with a fantasy of economic self-sufficiency and ancestral ethnic purity. A form of eco-nationalism was already observed by Jane I. Dawson in some of the former republics of the Soviet Union, where the rise of anti-nuclear activism was entangled with a nationalistic, anti-Soviet political effort during the 1980s and 1990s. The connection between ecology and nationalism has a far longer history in the far right: prominent theorists in the Nazi party argued for a mystic connection between nation, land, and ethnicity, a “unity of blood and soil”. Whether described as ‘ecofascism’ or as ‘fascist ecology’, these alarming connections have been examined by environmental historians, but mostly in relation to the 20th century. How far do they go back?

As a medievalist and a specialist in French literature, my interest in relations with non-human life in human cultures of the past brought me, in the last three years, to interrogate the roots of exploitations of the environment as an instrument of discrimination and nationalism. I decided to investigate what I know best: medieval scientific and literary texts. Although often left aside by environmental humanities, these texts provide a rich repository of ideas on how migration, political shifts and ethnic identities are influenced by or have effects on the environment. But the quest had to start from the present day, and from a very different type of text: political manifestos and interviews. That is how, in preparation for the conference Political Ecologies of the Far Right in 2019, I started to hunt down the tracks of French political spokesmen of “far-right ecologism”. 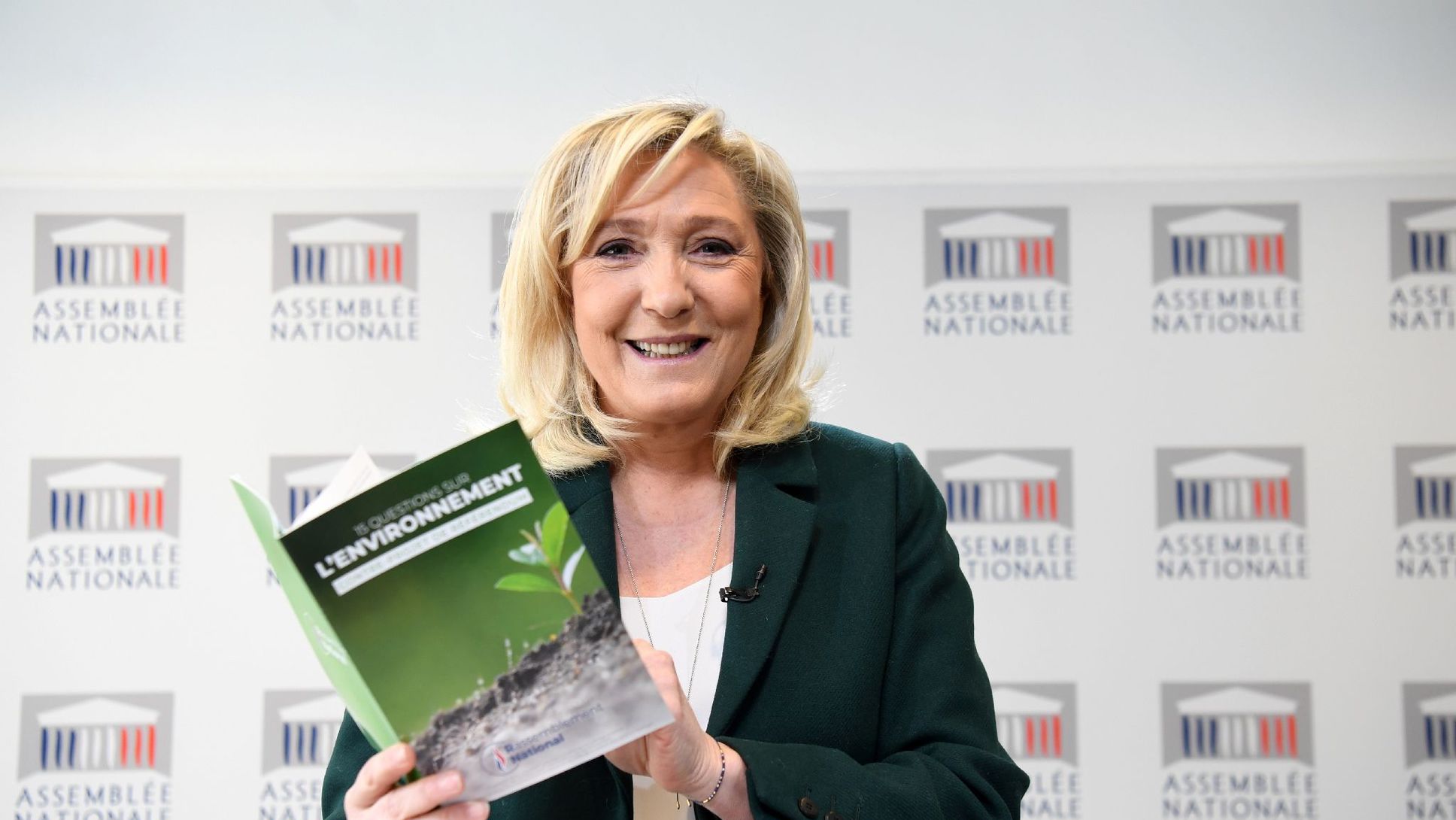 Marine Le Pen, the president of the Rassemblement National (RN/National Rally) during her press conference on ecology, on 9 March 2021 in Paris. Source: afp.com, Alain Jocard.

The Nature of the Nation

Far-right ecologism has several faces. Environmental groups branching from neo-fascist parties pair a sentiment of preservation of nature with a longing for an “old world” and a “pure nature”. This nature ­– only apparently neutral – is used to foreground a localism that mostly entails a naturalisation of nationalism and the exclusion of different ethnicities and cultures.

In France, the Rassemblement National (RN, former Front National) has been an important incubator of more overtly political eco-nationalist groups. In 2014, a movement called Nouvelle Ecologie (NE, New Ecology) was born with the double mission of preserving the environment and supporting Marine Le Pen for president. Since 2017, NE has declared to have moved towards stronger anti-European Union positions than Le Pen’s party, and sided with Florian Philippot, former RN, when he founded the more radical Les Patriotes.

Since its foundation, Nouvelle Ecologie claims to promote a “patriot ecology” and roots its environmentalism in the alleged defense of national interest: “we have to be closer to our people and not against our country’s interests”, their website recited. Like other far-right environmental groups, NE’s program never challenges the productivist logic of capitalism, and social and environmental justice is not their concern. They agree with traditionally Green-party claims such as reducing consumption and preserving wilderness, but only insofar as they can rant against their political opponents.

However, if we want to have a more in-depth idea of the philosophy and cultural references of French Eco-nationalism, we should turn to the environmentalist platform of Le Pen’s party after 2017. RN’s manifesto for 2019 EU elections claimed to strive for an “ecological France”. In this document, the fight to reduce the carbon footprint is used to justify economic protectionism and, with a convoluted logic, anti-immigration policies. The manifesto, therefore, moved seamlessly from preserving nature, to controlling the entry of people and goods from abroad, and to preserving a fictitious monolithic French cultural identity.

After the COVID-19 hiatus, Le Pen has continued the greenwashing of her party’s positions by proposing a referendum that once again uses the pretexts of the environmental crisis to foreground a protectionist and nationalist agenda. Promoter of the referendum is the MEP Hervé Juvin, spokesman of the ecological wing of the party. In the last years, he has proclaimed himself a champion of the far-right version of localism, which opposes globalism and the environmental impact of international trade, by emphasizing the need for national protectionist policies and exploiting regional and national pride. In this regard, Juvin stated in 2019:

“The treasure of human cultures is their adaptation to the natural environment, which is going to disappear with our migration policies”. 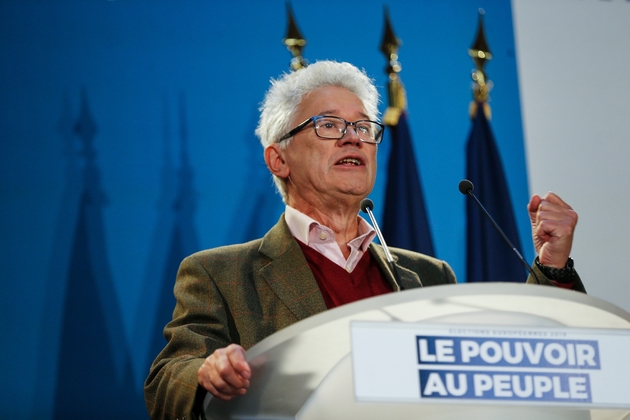 Hervé Juvin speaks at a meeting of the RN in Saint-Ebremond-de-Bonfosse, on 9 February 2019. Source: AFP/Archives.

RN’s eco-nationalism cries for preservation as a response to a pretended endangered state of the white population in Europe: “if we leave things the way they are, we will end up being a minority on our own land”, Juvin said the same year. This is a notorious leitmotif of the global far right. What’s interesting, though, is that this argument is introduced by defining culture as the result of how human beings adapted to their environment.

As I will detail in the next section, his definition of culture, which he uses as a basis for most of his environmentally-related arguments, is an illustration of pre-modern geographical biodeterminism and entails two main points. Firstly, cultural identity includes or is tightly related to inherited bodily markers of ethnicities, such as skin color and facial traits, which, according to evolutionary biology, are determined by an ancestral adaptation of human bodies to the environment. Secondly, culture as a whole (including religion, ethical values, political and social structures) is determined by a specific natural environment.

Both concepts stem from a long tradition in European history of culture. In order to understand the possible pull of a statement like Juvin’s, it is useful to understand how its premises are rooted in pre-modern European culture – as well as identify some significant differences.

According to the pre-modern theory of climates, climatic regions (cold, temperate and hot) determined physiological and psychological differences among human populations. This theory circulated in the West since at least the 5th century BCE: Hippocrates, Herodotus, Aristotle, and later Pliny discussed it in their works. In the Middle Ages, the theory of climates was revamped by the work of scholars like Isidore of Seville (7th century). In his Etymologies, Isidore insists on the impact of the climate on the mind and body of humans:

“People’s faces and coloring, the size of their bodies, and their various temperaments correspond to various climates. Hence we find that the Romans are serious, the Greeks easy-going, the Africans changeable, and the Gauls fierce in nature and rather sharp in wit, because the character of the climate makes them so.” (Etymologiae, XI.ii.105) 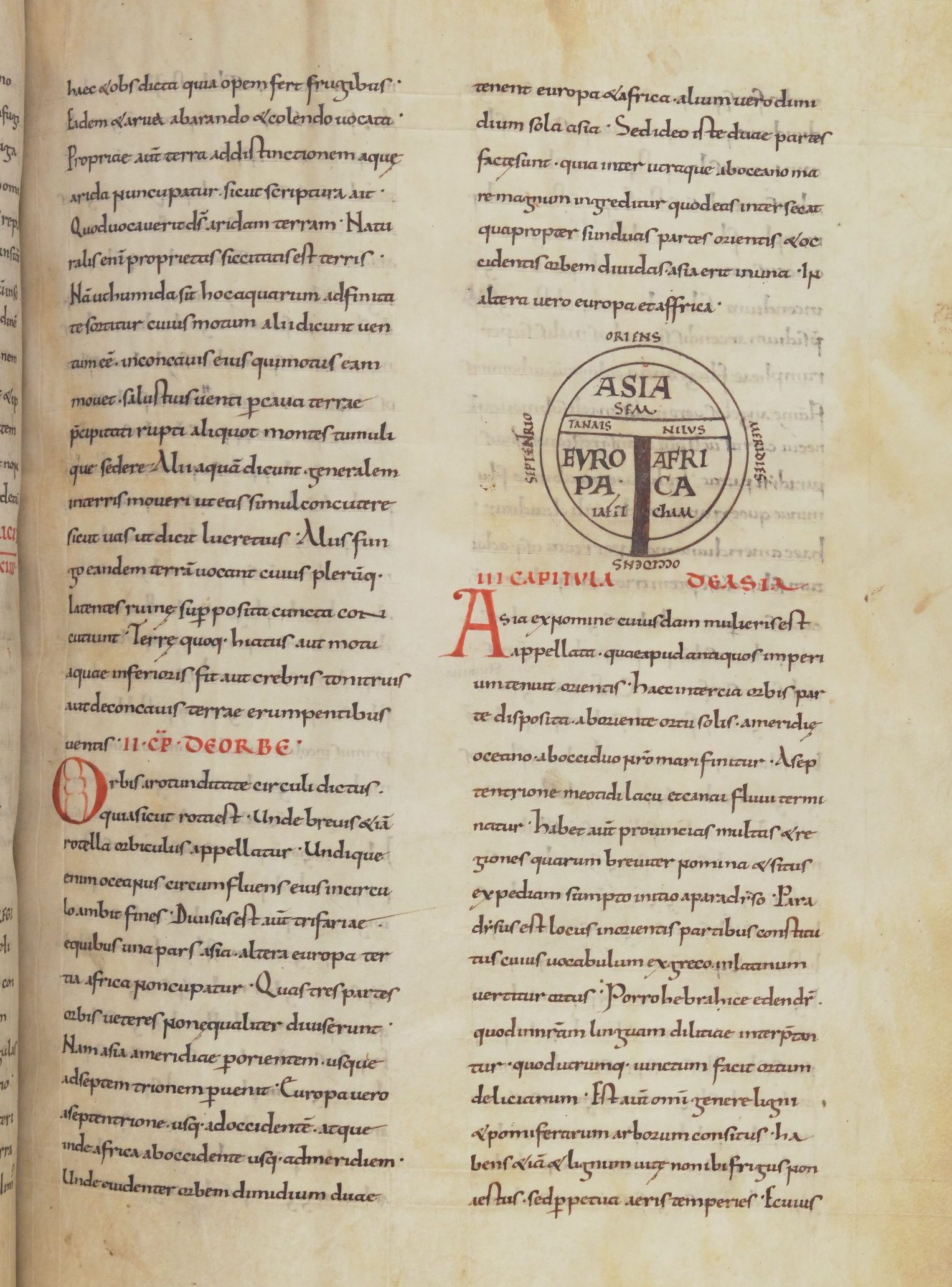 Although geographic determinism did not link cultures with human responses to the natural environment, it implied that extreme weather conditions generated drastic bodily deformations in the humankind, which medieval geographers frequently associated with extreme or somewhat “deformed” customs and laws (e.g. cannibalism).

Geographic determinism survived across the centuries and transformed. As it is often the case with medieval knowledge of the world, the Aristotelian/Plinian theory of climates was still going strong in the 18th century, when the French philosopher and jurist Montesquieu (1689-1755) adopted it as the grounds for his own theory of climates. In his De l’esprit des lois (1748), Montesquieu broadened the medieval definition of the theory, by stating that world climates also determine cultural aspects of human populations, such as social and political structures. This environmental anthropology is Eurocentric: according to Montesquieu, the climatic variance is on a scale that goes from better to worse, with France having the best climate – and consequently the best culture and laws (III.14). The environmental determinism of the French far-right environmentalists, therefore connects to the 18th-century version of the medieval theory of climates.

But there is another point of difference between the medieval theory of climates and the 18th-century version: in the latter, the natural environment has the power to change the culture of individuals that live in it. In the same book, Montesquieu brings the example of a child of European parents born and raised in India: due to the influence of the natural environment, the young human soon acquires the psychological traits and customs of India’s climate (III.3). As the scholar Jean Ehrard has noticed, Montesquieu’s theory positions humans in a passive role in relation to nature: the bodies, souls, customs, and society of human beings are molded by the natural environment. In other words, the environment seems to be such a powerful force as to overrule human cultures. This comes, of course, in contradiction with the far-right views on migrants being a threat to local environments.

To sum up, once we scratch the surface of French far-right manifestos, we find a cherry-picked adoption of 18th-century climate theories, rooted in premodern biodeterminism. The very theoretical basis used by eco-nationalism makes evident the fragile intellectual logic of environmental-based anti-migration programs. Ironically, when theorizing their “patriotic ecologies”, Juvin and his counterparts mobilize a tradition of thought that says the opposite of the far-right xenophobic discourse: in relation to the environment, all humans are migrants.

Antonella Sciancalepore  is a researcher (F.S.R.-F.W.B) at the Institut de Civilisations, Arts et Lettres of the Université Catholique de Louvain (UCLouvain, Belgium). She holds a joint PhD in Interpretation, Philology of texts and History of Culture (University of Macerata) and in Medieval Studies (University of Edinburgh). Her research specialisations include animals, human-animal hybrids, and environment representation in medieval textual culture (1200-1450).