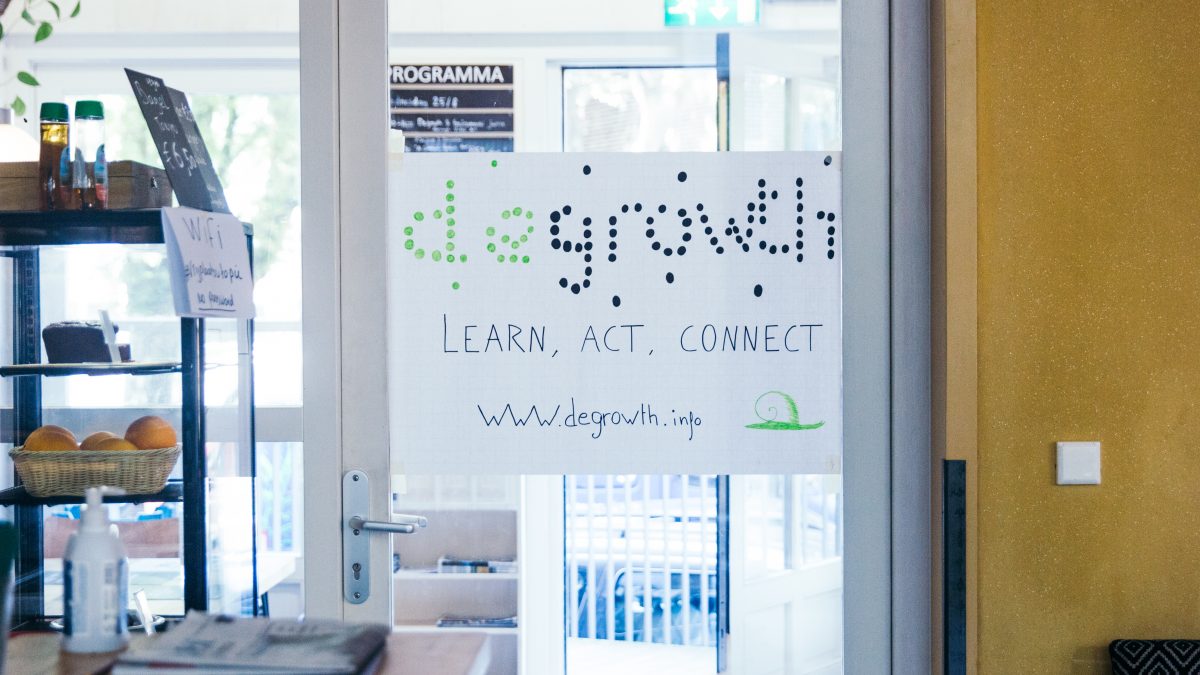 This summer, the 8th International Degrowth conference took place in The Hague. This short text provides reflections on some of the important themes, lessons, and points of contention of the event.*

Born in Europe but with roots across the world, “degrowth” confronts economic growth as societies’ primary indicator of progress, and interrogates the economic, sociocultural, environmental, and political ramifications of a shift away from it. The conference that took place in The Hague, “Caring Communities for Radical Change”, served as a gathering space for the degrowth community and a host of allied movements, frameworks, and initiatives, to meet and debate. It focused on counterculture, anarchism, and the humanities, and was structured around eight core streams, illustrating the thematic breadth of the wider degrowth community.

This is a brief overview of some of the questions and themes explored in the conference. It is based on my reflections and exchanges in the organisational process leading up to the event, the conference itself – both in the formal presentations and during informal discussions and debates – as well as follow-up interviews with several of the organisers.

The conference was a multi-dimensional community-building effort. The first dimension was the organisational process itself, which strove towards a conscious degrowth politics, working in accordance with the principles of horizontality, democratic decision-making, and building relations of care. Through close cooperation with food coops, autonomous spaces, and community gardens, the organisers embedded the conference in local activist structures.

Secondly, while international in nature, the conference was grounded in the Netherlands, aiming to introduce the term ‘degrowth’ into debates already taking place locally, thus making it more visible. The plenary of the Dutch Social Movements thematic stream, for instance, provided a space for exchange between several initiatives ranging from permaculture, to repair cafés, and campaign and strategic litigation organisations.

More broadly, the conference brought degrowth into conversation with different frameworks, political movements and initiatives, and fields of research. These differed in nature, including academics, activists, and practitioners, as well as in their relationship with degrowth, displaying synergies as well as tensions with it.

The workshops and plenaries of the conference unpacked the diverse approaches, tactics, and political orientations of the various movements and initiatives represented and explored how they might collectively form a whole greater than the sum of its parts.

During the conference, degrowth exhibited two predominant dimensions: as an analytic framework, and as a network or community of aligned initiatives, causes and struggles. Thereby, it gave a glimpse of both the complexity and the possibilities of building a wider movement for degrowth within a national and international context.

However, some core constituencies were not represented at the conference, such as representatives of political parties, larger Dutch social movements, trade unions and workers’ organisations, migrant organisations or other groups representing minorities and/or marginalised members of society. Social, racial, and other injustices were at the core of many sessions and debates among participants. Yet, those affected by such injustices were largely not present.

The relationship between degrowth and “a broadly defined global working class” has been the subject of discussion before. Degrowth, it is argued, lacks a “positive promise of human improvement and liberation.” Put differently, what specifically degrowth has to offer to working classes and those whose lives are most precarious is not (yet) clear.

This question remains pertinent. At the same time, the conference as a gathering space remained somewhat exclusionary. Many sessions, including some plenaries, were quite academic in style and content. Besides, taking a week off to attend a conference is impossible for many. Future events need to both consider content as well as the material conditions that would allow for participation by more diverse groups, including marginalised groups within society.

The conference provided a fertile ground for the broader community to explore diverse visions of socio-ecological transformations. Thematically, for instance, the Urban-Rural Dialogues stream investigated how degrowth can heal the antagonistic relationships between the city and the countryside produced by capitalism.

Sessions within the Cultural Politics and Embodying Degrowth thematic stream discussed the role that spirituality, culture, and psychology play. Some provided an interactive space for participants to explore together how and on what levels change is felt and experienced. Others investigated the role of hegemonic culture in the creation of consumer imaginaries and means of emancipation.

To transcend the academic roots of many degrowth discussions, the conference organisers collaborated with artists and activists to build an inclusive space that avoided prioritising a single way of knowing. Artistic events and activities took place all throughout the week, such as the collective building of a mycelium pigeon tower (inspired by the Mycelium Mandala, a symbol of the conference), visual installations, and movie screenings. 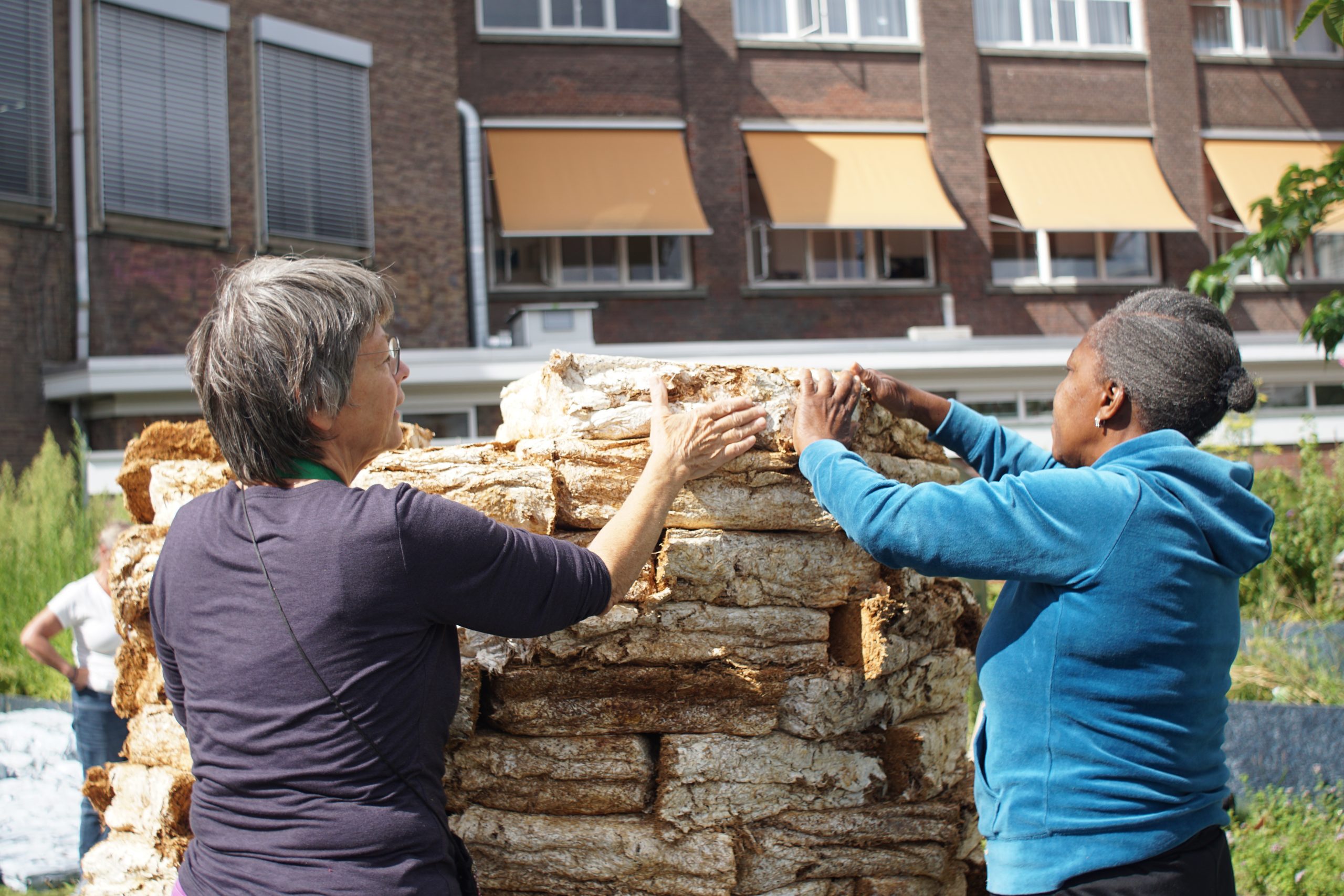 On politics, participants and presenters engaged on matters such as the agents and location of change and the role of the state. Will change come from the margins, brought about by people building alternatives and mobilising in opposition to the state? Or will it come from within institutions, accruing through an increasing pressure to reform, influencing decision-makers at all levels, and mobilising people across all backgrounds who are slowly waking up to the realities of the approaching socio-ecological collapse? What are the risks and pitfalls of the respective approaches? Where are the spaces for mutual learning?

Rich, lively, and sometimes heated debates at the conference show that these two approaches are both very present in the degrowth community today, without a clear synthesis or consensus in sight. To be sure, there exists broad complementarity overall and these debates are a sign of health for a political community. But they nonetheless represent the endpoints of a wider political spectrum, mirroring and hinting at present and future political debates in degrowth.

The degrowth community is expanding. Yet, to consolidate itself more strongly as an organised movement, it needs to connect to wider social forces. Besides the points made above, some also advocated for more inclusive formats than a conference, providing more informal spaces for mingling and exchange.

Others advocated for mobilising on issues such as debt, land appropriations by business and local governments, rising rent prices, the “crisis of care,” the right to healthy and locally produced food, or visions of meaningful and dignified work for those currently employed in environmentally destructive sectors. These may be ways to connect with other struggles and broaden the groups involved.

As the degrowth community grows, and deepens its analysis through conferences, workshops, and other spaces, these questions could provide a meaningful focus for future conversations.

Daniel Boston is a research master student of International Relations at the Rijksuniversiteit Groningen. His research focuses on alternatives to development and the (geo)politics of the socio-ecological transformation. He was involved in the organisation of the 8th International Degrowth conference.

* This post is a summary of a reportage written for the Transnational Institute and Ontgroei – two co-organisers of the conference. It is the last of three essays in Undisciplined Environments with reflections on the 8th International Degrowth Conference. The first essay, Degrowth and Feminist Political Ecology and Decoloniality, and the second, Green New Deals: Beyond growth?, were published last week.