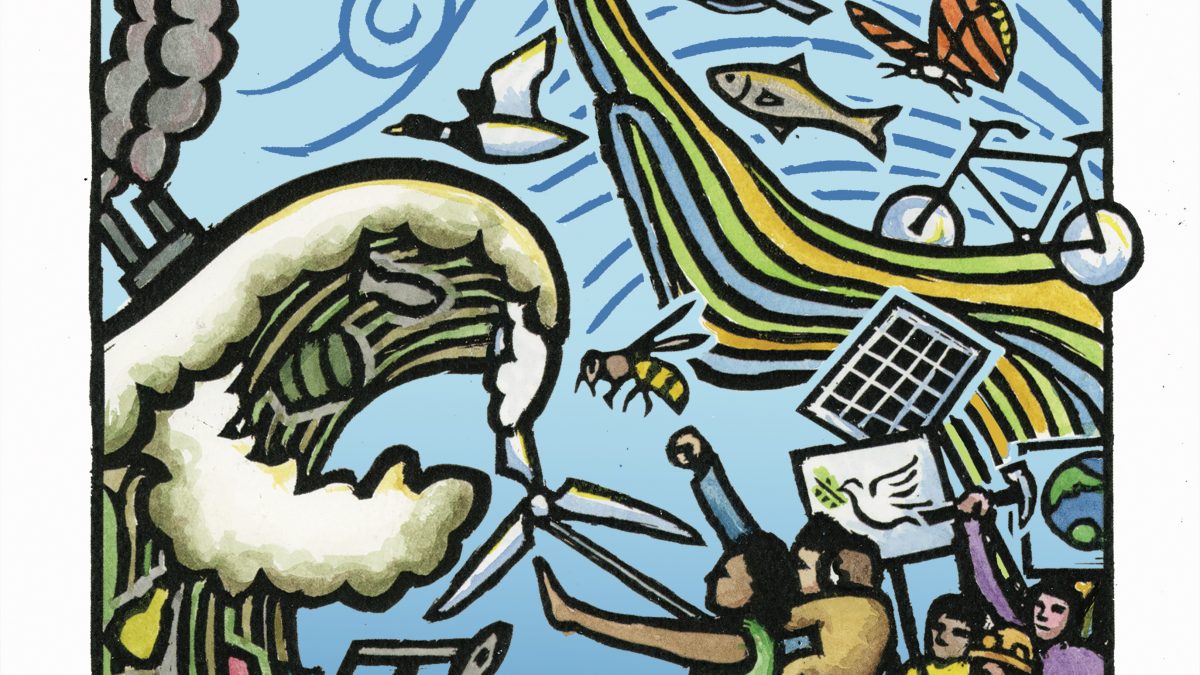 Can Green New Deals foster the deep eco-social transformations beyond capitalist growth needed in our society? And what are the tensions, convergences, and mutual learnings with Degrowth?

In the past few years, the Green New Deal (GND) has increasingly attracted attention from various eco-social movements around the globe – anti-racist, indigenous, climate justice, ecosocialism, ecofeminism and degrowth – as a programmatic framework for a rapid and comprehensive transformation of our societies that simultaneously addresses the climate crisis and systemic social inequalities.

As part of the 2021 International Degrowth Conference (24-28 August), we organized a thematic stream on Green New Deals, as a space to critically engage with this framework in conversation with degrowth and to explore tensions, convergences and spaces for mutual learning and allyship between these.

The panellists agreed that a GND is an insufficient but urgently necessary measure that pushes the boundaries of the current capitalist growth system. A transformative GND should centre social and environmental justice from local to global levels, and have community-organizing as the basis of political power.

The history of the GND shows variegated ideological underpinnings which persist to this day. The term has been embraced by neoliberal and neo-Keynesian forces, as in the European Union’s ‘Green Deal’, focused on ‘green growth’. Yet scholars and activists from different movements are appropriating the concept and making their own variants for ‘no-growth’, ecosocialist, feminist, indigenous, frontline community and grassroots GNDs. The panellists began by reflecting on their vision for a truly transformative GND.

‘Inspired by a photograph of a woman working in a factory during WWII. This twenty first century Rosie the Riveter harkens back to both the magnitude of the obstacles we have faced and our ability to overcome them.’ © Molly Crabapple

Kaur Paul pointed to environmental and climate justice, as well as anti-globalization struggles, as inspirations for her work on GND. Against extractivist visions of the GND, the 1.5°C target should be met with fairness and equality within and between countries, and through alternative value systems to fulfil basic needs within planetary boundaries. For the UK, this would mean rapid decarbonization coupled with trillions for climate debt payments, moving from the logics of competition to cooperation, lowering levels of consumption and developing systems of health, care and housing that can manage the impacts of climate change now.

Hirsch argued that, however incomplete, the GND could be a necessary instrument to reduce emissions as quickly as possible. She called for pragmatism, recognizing that we may not like some elements. The GND demands eliminating public subsidies for fossil fuels and perverse incentives in agriculture, coupled with ecosystem restoration and community-based green infrastructures. She advocated for other measures to evaluate progress: for instance, the percentage of women and people of colour employed, and the ecosystem benefits of practices such as agroecological farming.

Kallis highlighted that the current, progressive version of the GND has been a significant advance in the public discourse, linking the climate crisis to social justice; but that this will not be enough without systemic reductions in consumption and production. He reflected on how the urgency of immediate transition calls for more radical responses. We need to put the GND in place now, and for that we need to emphasize fossil fuel divestment and phase-out. The challenge is combining urgent action with the ‘slower’ deliberative and accountable processes of direct democracy.

Yeampierre stressed the intersectionality of climate justice and just transitions. Questions of who leads, who speaks, who sets the agenda, are crucial in a justice approach. She observed that, in the US, the GND was initially a ‘grasstops’ effort that did not include grassroots climate justice movements. The GND must be centred on those frontline communities which are impacted, not those which can profit from it. The just transition framework proposes a shift from an extractive to a regenerative economy – stopping the current economy while building the new. This transition demands relocalizing production, democratizing wealth and the workplace, advancing ecological restoration, revaluing indigenous knowledges and traditions, and rejecting false solutions such as carbon sequestration.

Critical commentators have asked important questions about whether the GND is ultimately capable of overcoming the colonial and growth-fixated tendencies of capitalist development. Panellists reflected on the convergences and tensions between GND and degrowth frameworks, the possibilities for GNDs beyond growth and the potential for mutual learning between pro-GND and degrowth movements.

Hundreds gather in San Francisco with the youth led Sunrise Movement to call on House Democratic Leader Nancy Pelosi to support the formation of a Select Committee to advance a Green New Deal to address Climate Change. © Peg Hunter

Kallis argued we should be careful not to shoot down potential allies: there is a political constituency for a GND without growth, yet a lot of intellectual energy is wasted on hypothetical debates while the fossil fuel industry still rules the day. Most economists posit that growth is necessary for decarbonizing and reducing inequities, yet growth is central to the climate and inequality crises. Questions on how to pay for the GND are politically more difficult, as this requires taxation, redistribution and reallocating significant funds from, for example, the military. Degrowing here may be easier to agree on, but talking about other sectors, aviation for instance, is trickier.

Hirsch argued that it would not be that difficult to finance a GND. In the Netherlands, for example, subsidies for fossil fuels amount to €17.5 billion per year, while the transition to a fossil-free system is estimated to cost €6 billion, including compensation schemes. She stressed that the way we value things also defines what we mean by growth; thus, creating alternative metrics can help to shift away from the growth imperative.

For Yeampierre, the challenge of overcoming the (growth-based) capitalist system is committing to a longer-term transition when you cannot guarantee ‘bread on the table’ and when you cannot show what the alternatives look like. If you want workers’ support, for example, you need to ensure their survival with a concrete vision.

Kaur Paul stressed the need to look at this question at the global level: 50% of emissions come from 10% of the world population, and this stark inequality fundamentally needs to change. We need a positive vision of degrowth in the global North that makes space for ‘growing’ livelihoods and improved wellbeing in the global South. This demands redefining ‘a good life’: sharing of essential services, having more time to connect and enjoy a good quality of life, rather than an exploitative job.

Fighting for GNDs beyond growth confronts us with important challenges related to vision, strategy, positionality and scales of action: for instance, tensions between changes within the system, versus changing the system; and between national and transnational scales of action in the uneven playing field between ‘rich’ and ‘poor’ regions. The panellists thus addressed shared strategies for enacting a transformative GND that transcends colonial and growth logics.

Yeampierre argued that climate change will disrupt governance, so we need to imagine what co-governance looks like. Direct action and protests need to be combined with education, arts/culture and learning resilience to help people make connections and uplift the movement. Frontline communities are leading with solutions, and Yeampierre stressed that this needs public investment at a local scale. Also, the white descendants of privilege need to step up, as many white allies did by putting their bodies on the line during the Black Lives Matter uprisings.

‘This image illustrates the relationship between creating alternatives, aligning with nature and opposing the forces of oppression and destruction.’ ©Ricardo Levins Morales

Along similar lines, Kaur Paul added that centring those communities at the frontlines of the climate crisis means recognizing that we – the people – have the power. We need to build solidarity across sectors, for instance, demanding just compensation for workers in a soon-to-be-closed factory.

Hirsch emphasized the need to walk the corridors of power and engage with policy-makers to achieve reforms. A key strategy for Hirsch is transforming financial infrastructure with more democratic decision-making and shifting money to the right places, with public financing setting the tone.

Kallis argued that we need to use direct action to stop new fossil projects and start closing existing ones. We need to build power and support for direct action and civil disobedience, and the right to protest. Yet while society at large is worried about the climate crisis, there are too few people mobilized and it is not clear where the tipping point for mass popular support will be.

Beyond the plenary, several conference sessions engaged with the GND. These included political ecology perspectives outlining new energy and extractive frontiers born out of mainstream GNDs; discussions around the current EU policy landscape in sectors ranging from agriculture to finance and aviation; novel legal approaches to affect change; and workshops on re-thinking the labour market and envisioning designs that are not dependent on ‘the endless jobs and growth treadmill’. This showed the diversity of approaches to GND-degrowth linkages. At the same time, there was a shared vision of alternative GNDs based on solidarity, operating from the grassroots, and in alliance with climate justice and other movements, to build the political power needed for transformative change.

Gustavo García López is a Researcher at the Center for Social Studies, Univeristy of Coimbra, and member of the editorial collective of Undisciplined Environments.

Diego Andreucci is a Postdoctoral Researcher at the International Institute of Social Studies in The Hague, and member of the editorial collective of Undisciplined Environments.

Corinne Lamain is the new Director of the Center for Unusual Collaborations, and a PhD candidate in Political Ecology at the International Institute of Social Studies.

Daniel Boston is a research master student of International Relations at the Rijksuniversiteit Groningen, and was an intern with the Agrarian and Environmental Justice team at the Transnational Institute.

Selj Balamir is a postcapitalist designer, commoning researcher and climate justice organiser. He is among the initiators of the social housing projects NieuwLand and the Nieuwe Meent cooperative, and a PhD candidate in Cultural Analysis at the University of Amsterdam.

Julia Karch is an Intern in the “Integrated Implementation of the Agenda 2030 in Cities and City Regions” Sector Programme of the German International Development Agency GIZ.

* All the authors were involved in the organisation of the 8th International Degrowth Conference 2021 in the Hague.

** This essay was first published in the DevIssues, Vol. 23, No. 2 (November 2021). It is the second of three essays which we will share over the coming weeks in Undisciplined Environments with reflections on the 8th International Degrowth Conference. The first essay Degrowth and Feminist Political Ecology and Decoloniality, was published last week.