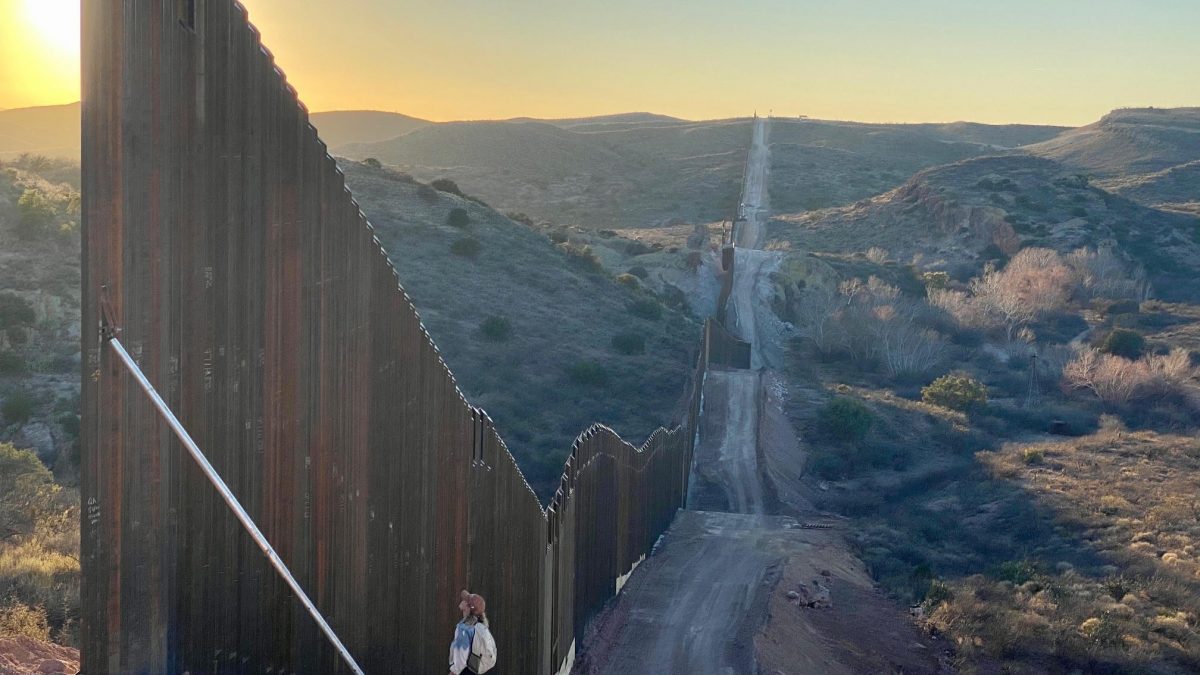 By Paige Torchio and Kimberley Thomas

The environmental crisis along the United States Southwestern border and borderland region is the result of legislation passed in 2005 aimed at bolstering national security.

Media coverage of the U.S./Mexico border has overwhelmingly focused on the social and political dimensions of unregulated migration. Much has been made, for instance, of the threats that such migration poses to domestic jobs, public health and safety, and, of course, national security. Far from mere rhetoric, claims of public risk have been vividly invoked in widespread calls for construction of physical barriers along the border. Conversely, critical perspectives on border security reveal numerous injustices and failures. These include the ways that border walls materialize racism and xenophobia, redirect precious funding from social welfare programs, fail to address the structural drivers of migration, and violate human rights. While these concerns undoubtedly demand redress, there has been noticeably less coverage of the environmental impacts associated with border wall construction. Nor, we argue, are these separate issues. It turns out that social marginalization and mistreatment are intimately linked to ecological destruction along the U.S./Mexico border.

For years, scientists, scholars, and environmental organizations have sounded the alarm about the ecological damages and impacts of the border wall. The National Wildlife Federation, for instance, has deemed the creation of the wall “one of the biggest potential ecological disasters of our time.” The border wall threatens wildlife in a myriad of ways. Activities such as groundwater pumping, mountaintop removal, blasting rock, and impounding water dramatically alter habitats. This in turn poses additional risks, including threats to species’ mobility, biodiversity, gene flow between populations, population decline, extinction, habitat fragmentation and impairment. Despite these well-known threats, there remains a gap between policy and science to produce effective strategies for protecting endangered species, animal habitats, and biodiversity across the borderland region. One reason for this curiously lies with a federal law on “identification (ID) security”.

The border wall has effectively evaded and bypassed environmental laws and regulations because of the 2005 Real ID Act. This legislation provided the Department of Homeland Security (DHS) the authority to bypass environmental laws that would slow down barrier construction. More specifically, it allowed DHS to disregard the Endangered Species Act (ESA) and the National Environmental Policy Act (NEPA). Circumventing these laws and regulations means that DHS can skip environmental impact assessments (EIA), which would otherwise require the agency to develop less harmful alternatives. The Real ID Act also allows border wall construction to bypass additional EIA safeguards, such as post-construction environmental monitoring, public input, and mitigation. 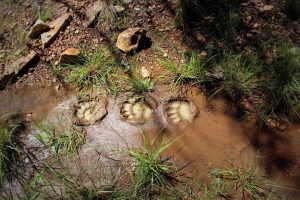 Bear Tracks in mud in the mountains just north of the border. Source: The Center For Biological Diversity

“[Authorizes] the Secretary of Homeland Security (the Secretary), in the Secretary’s sole discretion, to waive all legal requirements as necessary to ensure expeditious construction of certain barriers and roads at the U.S. border. Makes the Secretary’s decision effective upon publication in the Federal Register. Gives U.S. district courts exclusive jurisdiction to hear causes or claims arising from actions or decisions by the Secretary pursuant to this section. Limits such causes or claims to those alleging a violation of the Constitution.”

There is no mention of the borderland environment or any mention of species that could be impacted. By limiting the causes or claims to only allegations of a constitutional violation, it effectively blocks any claims pertaining to the ecological impacts and damages produced by the border wall. Given the environmental impacts produced by the border wall today, it makes the Real ID Act inadequate and frankly dangerous for guiding decision making around border security.

Scientists are warning that if nothing is done with the built sections of the wall, then the United States and Mexico will face the extinction of multiple endangered species. Roughly 100 endangered species are at increased risk of extinction, including jaguars, ocelots, and the Mexican gray wolf. The border wall also stands to devalue millions of dollars in conversation initiatives and scientific research by effectively weakening the objectives of conservation efforts.

To understand why, we must understand the history of the border wall and how border legislation changed in the wake of the attacks on September 11, 2001. Prior to 9/11, there were waist-high barbed wire fences along some sections of the border, which were mainly used to contain livestock.

After 9/11, national security, terrorism, and anti-immigration became dominant issues in the political agenda. In that context, Congress passed a set of measures to strengthen border security, which resulted in a change to the physical border and bordering practices. This included the Real ID Act, which enacted the 9/11 Commission’s recommendations to improve national security. Accordingly, the Bush administration authorized a 700-mile expansion of the border fence, and in some areas the barbed wire fence was replaced with a 20- to 30-foot-high concrete wall. It appears that DHS was authorized to bypass federal environmental laws to expand the border wall as quickly as possible.

The Real ID Act has been controversial since its inception for many reasons, including being passed without Congressional hearings. After stalling in the Senate, Rep. James Sensenbrenner (R-WI) inserted the Real ID Act as a rider on the 2005 Emergency Supplemental Appropriations Act for Defense, the Global War on Terror, and Tsunami Relief, 2005. Hence, this controversial legislation was not passed through traditional democratic processes and instead was forced into enactment through emergency legislation aimed at combating terrorism and strengthening national security.

Of course, the harms of the Real ID Act and related border policies extend to the social realm as well. Ostensibly intended to boost national security, such legislation rests on the legal designation and social construction of a terrorist. Yet, the anticipatory identification of terrorists—for what is the point of these measures if not to prevent attacks?—is highly subject to racial and religious bias. Border security policies codify the presumed status of Black, brown, poor, and/or Muslim migrants as illegal or criminal and thus justify their inhumane treatment once they encounter a border patrol agent, outpost, checkpoint, or crossing.

The ecological destruction caused by the border wall also carries associated social impacts for marginalized communities living along the border region. For example, the wall has been shown to exacerbate flooding along sections of the border wall that places residents and sensitive habitats at risk. Physical barriers also make border crossings more dangerous by forcing migrants to traverse more hazardous terrain, like deserts, steep cliffs, and swift rivers. It becomes clear that environmental injustice cannot be decoupled from social injustice.

Unfortunately, the shift in administration earlier this year augurs only modest change. On January 20th, President Biden signed an executive order that immediately ‘paused’ border wall construction for the next 60 days, and in late April, he announced the cancellation of any future construction. President Biden has also vowed to not build another foot of the border wall. However, his intentions with sections of the barrier already built during the Trump administration are decidedly more conservative. In August, he told NPR that he had no intention of taking down the sections of the border wall that were previously constructed.

So, while the new administration has stopped any further construction, this raises questions of what to do with built sections of the wall that continue to threaten human and non-human lives. While stopping construction is a step forward, there is still a lot that needs to be done. This issue has garnered mainstream attention with many scholars and activists calling for “Mr. Biden to tear down that wall!” Demolition would certainly alleviate some of the environmental impacts associated with the border wall. But recognizing the fates of migrants, borderland communities, and ecosystems as intertwined means that achieving justice will require far more than simply breaking down walls and fences. It will also entail dismantling the racism and xenophobia that put these barriers up in the first place.

Kimberley Thomas is an environmental social scientist and Assistant Professor in the Department of Geography and Urban Studies at Temple University. She takes a political ecology approach to questions about environmental justice, human vulnerability to hazards, and the multi-scalar politics of resource governance.