On the destructive forces of the capitalist mode of production: Or, how to counter corporate violence with degrowth 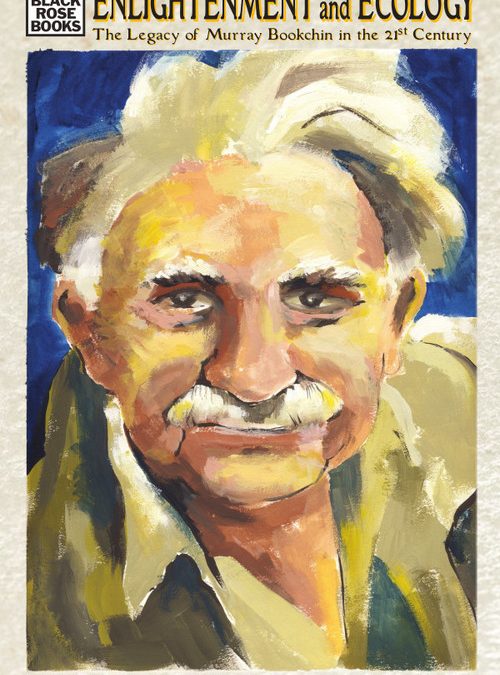 The recent collection edited by Yavor Tarinski explores the contemporary influences of Murray Bookchin and the recent resurgence of interest in the theory of social ecology.

It is not an easy task to compile a book in such rapidly changing times. The editor of the collection, Yavor Tarinski, writes: “It took us over a year to prepare—a period in which we faced many difficulties.” Indeed, we are living very troubled times, considering, for instance, the questionable ways different governments act in times of COVID-19 and the institutional racism that has sparked in the context of many protests in the US but also in other countries. According to Tarinski, “It is in such difficult times that you have the time to reflect on the ills of the current state of our societies and see that things can’t return to the way they used to be. Something must radically change.”

When it comes to radical change, Murray Bookchin is a central reference, and social ecology is something one needs to engage with. In fact, Bookchin is a pioneer in the environmental movement, and one of the most well-known representatives of social ecology, a school of thought that has had a remarkable impact on the Left.

Although the meaning of “social ecology” is not always made explicit by the contributors of this book, one gets the impression that it must entail something close to what Bookchin and the North America-based Institute for Social Ecology have envisioned: “Social Ecology advocates a reconstructive and transformative outlook on social and environmental issues, and promotes a directly democratic, confederal politics. Social Ecology envisions a moral economy that moves beyond scarcity and hierarchy, toward a world that re-harmonizes human communities with the natural world, while celebrating diversity, creativity and freedom.”

This institute, with its many forms of education, has been very influential in and outside North America. Perhaps the book could have delved deeper into the influences of social ecology on the North American Left, although much has already been written about it. The strength of the collection, and what makes it very valuable for the international social ecology movement, is that it focuses on the impact of social ecology in countries like France, Germany, Bulgaria, Greece, Turkey and Kurdistan.

The first part of the book, “Bookchin’s Theoretical Legacy” analyses the main ideas of this ground-breaking thinker. It presents how Bookchin thought about politics, city life and ecology. Yet, for those who are new to his ideas, it might not be the best introduction: perhaps better to first read some of his texts, or the excellent biography Ecology or Catastrophe: The Life of Murray Bookchin by Janet Biehl. She is one of the main experts in this field of thinking, and also one of the contributors to Yavor Tarinski’s edited volume.

Murray Bookchin was responsible for the renewal of libertarian socialism that started in the sixties. Drawing on some of the ideas of social thinkers like Peter Kropotkin, Karl Marx, Theodor W. Adorno, Lewis Mumford and Hannah Arendt (among others), he helped the contemporary Left to better understand the world by unfolding what city life is about, what kind of direct democracy we have to strive for, or how to achieve a moral economy.

Bookchin was a dialectical, radical and utopian thinker. He believed in the importance of utopian dialogues (not blueprints), and struggled for social emancipation. He was a pioneer in the environmental movement and wrote about ecological issues since the beginning of the sixties, highlighting how social problems are very much connected with ecological problems: this is one of the central tenets in his conceptualization of social ecology.

This first part of the book includes little about his polemical writings and his criticisms of certain intellectual tendencies within the Left and the ecological movement. This would have been interesting because, as Tarinski mentions: “Bookchin did not hesitate to criticize the postmodernist nihilist politics of renowned philosophers of the recent past and his time like Nietzsche, Heidegger, Foucault, Derrida, Lyotard, Deleuze, and Baudrillard. He was also highly critical of political movements like anarcho-syndicalism and Marxism. Bookchin recognized their historic importance, but couldn’t overlook their role today — an attempt to fall back, in times of a terribly fragmented reality, onto obsolete, even archaic ideologies in a search for a sense of continuity and security. And of course, he never hid his complete disagreement with New Age and mysticism-centered streams that tend to pollute and depoliticize social movements today.”

Moreover, at times Bookchin’s influence on leftist movements is perhaps exaggerated in the book. For instance, Tarinski writes: “Bookchin’s legacy has spread like wildfire, especially in the last decade. The more social movements like the Indignados and the Occupy experimented with forms of assembly democracy, the more their interest in Murray Bookchin’s ideas rose. Nowadays, his political influence is palpable among grassroots movements all around the world. From Western European and American protesters and climate activists, to Middle Eastern revolutionaries, the spirit of direct democracy and social ecology can be observed shape in popular attempts at claiming power from the State and Capital.”

Bookchin had relatively little influence during the last fifteen years of his life, while he became increasingly popular since his death (alongside other social ecologists). This may have something to do with the large impact his thinking had on Abdullah Öcalan, one of the best-known leftist thinkers but also someone who greatly contributed to the theoretical development of the Left in Rojava, influencing its libertarian socialist ideology and the feminist movement there.

The second part of the book, “Bookchin’s influence on Political Practice around the World”, further unpacks the political influences of social ecology in the past fifteen years. Perhaps, however, more could have been written about the influences of Bookchin’s thinking in western and northern Europe. For instance, I found little about Bookchin’s ties with some of the German Greens, such as with the well-known sociologist and activist Jutta Ditfurth (with whom Bookchin was friends). Moreover, we read little about the influence that Bookchin’s work had in countries such as the United Kingdom, Belgium, the Netherlands and some Scandinavian countries, although some of the contributors are from these places. It is remarkable that  social ecologists in these countries often prefer to focus on international affairs rather than on their own regional and local contexts.

In Scandinavian countries, for instance, influential social ecologists  have focused on writing and publishing mostly in English rather than in their local languages: this resulted also in the creation of the publishing house New Compass.

Or my Belgian friend Roger Jacobs, one of the contributors to this anthology, wrote an important text explaining how Bookchin sought his own path within social ecology and, by extension, within the Left. Jacobs explained the complex linguistic and political institutional situation of Belgium (which is a small country but one that has three national languages), arguing that this complexity made it very difficult to disseminate ideas about social ecology. While I agree with his argument, I also would have mentioned that nowadays Belgium is one of the European countries where Bookchin is best known, and this happened during the past five years: the libertarian movement in Belgium is much closer to social ecology than it used to be.

Overall, social ecology is increasingly popular across Europe. For instance, although clearly the transition from a classical syndicalism to one with a more communalist or social-ecology perspective is not going so smoothly in the context of most European anarchist movements, there are promising signs coming from France, a country with a long and important libertarian tradition. This is well described in the book, in a contribution by Theo Rouhette, which reflects on one of the most significant popular uprisings in Europe in the last years, that of the Yellow Vests.

This movement, which started in 2018, continues to function today as a confederation of local assemblies. What Rouhette notes is that Bookchin’s thesis on libertarian municipalism played an important role in the development of this movement, and right-wing forces have not managed to stop it. This is very different from what has happened in the Netherlands, where this movement has quickly languished into anonymity. Dimitrios Roussopoulos rightly states in the text he wrote for this book, ‘Montreal and Murray Bookchin’, that the Canadian publisher Ecosocieté has contributed to social ecology’s rising popularity in France: for instance, the libertarian municipalist Marcel Sévigny, who has written extensively for Ecosocieté about his experiences in a Montreal borough council, visited Belgium in 2019 to take part in an international social ecology conference with mainly French-speaking Belgian and French attendees.

The impact of some key figures of French social ecological thought could have been further explored. I am referring for instance to writers and long-standing tireless supporters of social ecology like Vincent Gerber from Switzerland, Floréal Romero (who lives in the south of Spain but has travelled frequently in recent years to help spark social ecology in countries like France and Belgium), or the Belgian philosopher Annick Stevens (who has found her permanent home in Marseille).

Three further strengths of this book deserve mentioning here. Firstly, the collection highlights the inspiration Bookchin got from the old Athenian polis and ancient Greek philosophers like Aristotle, an inspiration that partly contributed to his direct democratic views. Interestingly, politics in ancient Athens also inspired the social thinker Cornelius Castoriadis, someone who clearly influenced radical student movements in Paris in the late 1960s. Castoriadis is also one of the main philosophers who has an important impact on the radical Left of Greece. According to Tarinski, the differences between Bookchin and Castoriadis are smaller than both thinkers would have admitted.

Secondly, as pointed out by the Norwegian contributor Eirik Eiglad, “reshaping urban life along ecological and democratic lines will necessarily require immense environmental and infrastructural transformations, which will above all require new civic or communal structures.” This is also one of the central objectives in the politics of social ecology: urban life is discussed in more occasions throughout the book and this I found very important, as Bookchin himself extensively discussed this topic in his writings.

Finally, one of the texts I enjoyed most in this anthology is ‘On Hannah Arendt and Murray Bookchin: Bridging Intellectual Legacies’ written by Jason Toney. The similarities and differences between Bookchin’s and Arendt’s are indeed very interesting. Long after her death, Arendt also has a growing influence in the world of philosophy, and certainly in countries such as Belgium and the Netherlands. Moreover she, just like Bookchin, also sought inspiration in the politics of ancient Athens. And although her political preferences were different from those of Bookchin, she also went in search of the valuable elements in social revolutionary traditions. Also, while Bookchin leaned far more towards social anarchism, both clearly did not support the authoritarianism that has misled much of the Left.

In conclusion, this book is crucial for everyone trying to understand what the social ecology movement in Europe is about and the influence it has had on the Left and on movements like Occupy, Indignados, the climate justice movement and the Yellow Vests movements in the twenty-first century. This anthology greatly sheds light not only on Bookchin’s ideas but also on the practices and actions of many different people and groups who have been inspired by those ideas.

Rafa Grinfeld is a writer and activist based in Antwerp, Belgium. He has engaged with social ecology since the nineties, and has written extensively about related topics, mostly in Dutch.