Some of the once over a hundred treehouses in the Dannenröder Forest. Source: https://waldstattasphalt.blackblogs.org/wp-content/uploads/sites/1055/2020/09/IMG_0059.cleaned.jpg

Forests are more and more central to discussions on resources for climate mitigation. However, seeing the forest only as a site of climate mitigation obstructs the way to an ecological society. Instead, forests should be seen as sites of resistance against ecological destruction.

Anthropogenic climate change is caused mainly by rising concentrations of CO2 and other greenhouse gasses in the atmosphere. Therefore, it seems natural to an increasing number of scientists to focus on forests as CO2 sinks and to emphasize their role as “negative emission technology ”. To estimate such “negative emission potential”, scientists run integrated assessment models. In these models, the natural world is often seen as a collection of resources dramatically influenced by humans, as the emergence of the term Anthropocene in western-inspired research shows. The Anthropocene describes a new geochronological epoch that accounts for the impacts of the human species on Earth’s bio-geo-chemical processes. Eileen Crist identifies this human-centeredness as a root of ecological predicament and states “that the discourse of the Anthropocene refuses to challenge human dominion, proposing instead technological and managerial approaches that would make human dominion sustainable”. Political ecologists as well as Indigenous people argue that such a mindset is connected to ecological destruction and advocate for the human as part of nature, not as its dominator.

However, it is not only the treatment of trees as a resource but as a commodity that is common in IPCC reports. The IPCC uses integrated assessment models, which base their scenarios on cost minimization and hence need to give prices to carbon in the atmosphere and to negative emission technologies like afforestation. These models are only able to project the present into the future and are not able to imagine another society that can tame the root causes of climate change.

Furthermore, this approach reduces the perception of the forest to data, and hence other forms of knowledge that are based on interaction with the forest itself are devalued. The data and the access to high computational power to run integrated assessment models as well as climate models are limited to certain people and may lead to a form of epistemic domination. The Knowing the Land is Resistance collective even calls this dominator ecology:

“Dominator ecology is the ecology of management from a distance and of remote expertise, that sees itself as fundamentally separate from the land inhabiting a present without a past or a future”

Dominator ecology tends to produce globalized knowledge that is defined by Mike Hulme as “knowledge which erases geographical and cultural difference and in which scale collapses to the global”.

Typical questions being asked by this dominator ecology are “can large-scale afforestation stop climate change” or “how much CO2 can we emit until we reach tipping points”. These are of course important questions but their answers can be used to justify certain levels of destruction until some numerical values (which are set by western sciences) are reached. Ducan McLaren und Nils Markusson traced the co-evolution of technological promises, modeling, policies and climate change targets and shed some light on how globalized knowledge can be intertwined with technological promises.

Globalized knowledge can overshadow other people’s limits, which are rooted in experiences that are more direct and might have already be reached.  This is illustrated by Vanessa Nakate as follows:

“The Paris Agreement aims to keep temperatures below 1.5 degrees Celsius—but I want people to understand that a rise of 1.2 degrees Celsius is already hell for me and other people living in Uganda and on the African continent. We’ve had severe droughts, floods, and storms, which are getting worse as a result of climate change. In 2019, Cyclone Idai—the worst cyclone to ever hit the continent—caused destruction and flooding in Mozambique, Zimbabwe, and Malawi, leaving more than 1,300 people dead and many more missing”

On the other hand, for the climate justice movement forests are not only sites of mitigation but also of resistance and utopia . To explain this I want to share my experience from a forest occupation in Germany. The Dannenröder Forest was occupied to stop construction of the highway A49 in October 2019 and it lasted about one year. Local citizens have opposed this highway for over forty years. Activists built treehouses and other structures to protect the trees from clearing for this highway.

During the occupation, activists and residents developed a deeper connection to the forest and even established relationships with single trees. Activists went back to felled trees and collected pieces of wood from the trees they occupied. Other activists gave trees names like “Grandma”, “Grandpa” or “Grandchild”. In addition, guided tours and face-to-face skill-shares about plants, herbs, mushrooms were and still are common. 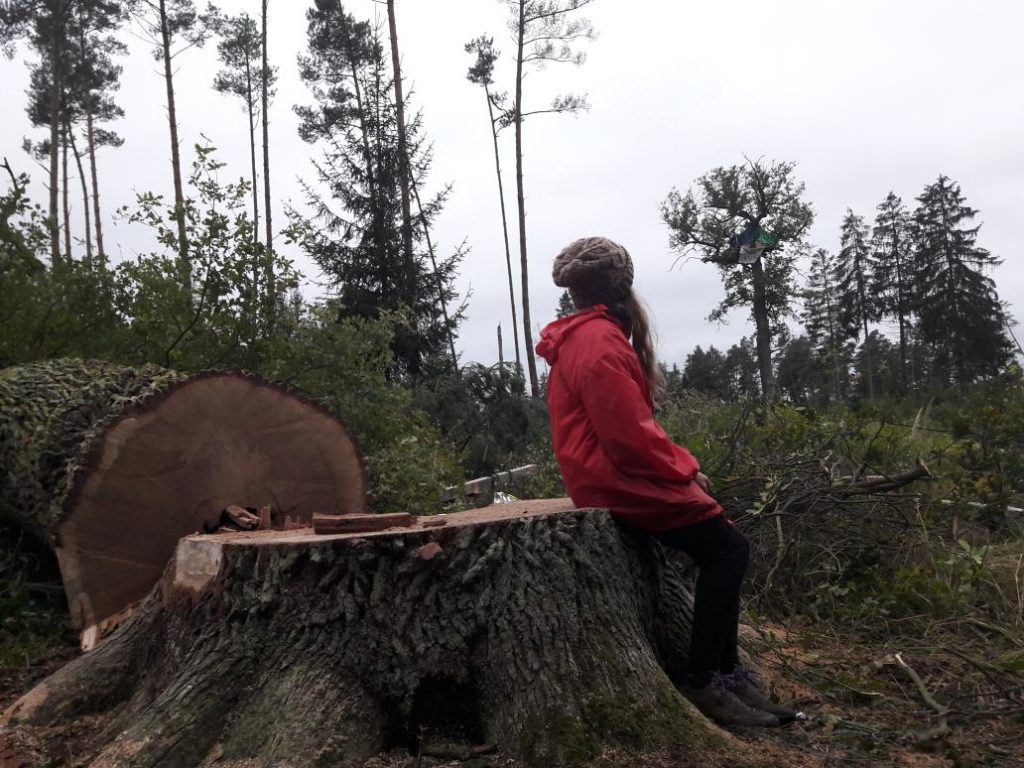 However, it is not only the change in the relationship between people and forest that is interesting, but also the change in the relationships among people. Occupiers and residents built non-hierarchical relationships characterized by solidarity and awareness. This resulted in non-activist people speaking gender-appropriate language, for example. Remarkable evidence for new emerging forms of co-living is shown by a hotel close to the forest. The owners gave their tavern to activists as a Corona conform study room. Thus, students did not have to leave the protest site to attend to their online lectures. Furthermore, they had an empty flat that now serves as a safe space and restroom for activists. All these experiences contributed to changes in the mindset of people, and illustrate that living together in solidarity and with a focus on needs instead of profit is possible. Moreover, activists confronted performance pressure and established an attitude of “people do what they can but also need to take care of themselves”.

The point I want to make is that different actors experience the climate crisis differently. Such differences give rise to diverging solutions. However, these experiences exist in a world permeated by power structures and thus are not valued equally. One-dimensional solutions are not guided by reason but rather by hegemonic discourses formed by neoliberalism, racism, and patriarchy. Therefore, the perspectives of anti-capitalists, Black, Indigenous, People of Color, women* and non-western scientists can be underrepresented or oppressed.

Experiencing the forest not only as a site of climate mitigation but also as a site of resistance can raise the awareness of the multitude of realities in which the climate crisis manifest itself and hence allow to identify problems arising from dominator ecology and globalized knowledge. Indigenous people as well as activists also point out the role of forests as sites of mitigation but their motivation has often fundamentally different roots. It is based on reciprocity and even kinship, not on the idea of the forest as resource and commodity (e.g., Waldmüller & Rodríguez, 2018; Wilson and Inkster, 2018).

The natural sciences observe climate change in numbers and with a certain distance to the crisis. While activists, Indigenous people, and other affected communities experience the climate crisis more directly and not only as a rising global mean temperature but also as police violence and as an attack on their way of living. It is essential to note that the climate crisis is not only a crisis of CO2 but also a crisis that is inherently related to the question of how people want to live together. Hence, natural sciences are not able to come up with solutions to the climate crisis since their analysis does not allow tackling the crisis at its roots.

Using models and mathematics can of course help to better understand climate change but these also run the risk of producing knowledge that can be exploited by capital interests. Therefore, the question is how can scientists avoid that their knowledge is used to advance global managerial and one-dimensional solutionist approaches to the climate crisis?

The various problems with the REDD (Reducing Emissions from Deforestation and Forest Degradation) and CDMs (Clean Development Mechanisms) programs give rise to the following questions: Can re/afforestation be sustainable when it is driven by a profit logic and a mindset of domination of human and non-human nature instead of reciprocity? Is it useful to work on the topic of re/afforestation without dealing with the problem of how to establish a reciprocal relationship between human and non-human nature? The answer to these questions can come from a practice critical of power relations, where the privileges and forms of domination intertwined in a certain scientific method and politics are constantly reflected and then dismantled.

Felix Krawczyk is a physics master student at Karlsruher Institute of Technology (KIT) with a special interest in climate justice. He is currently writing his master thesis about the impacts of large-scale re/afforestation on the radiation balance in Europe.

Cover image: Some of the over a hundred treehouses in the Dannenröder Forest. (Source: https://waldstattasphalt.blackblogs.org/wp-content/uploads/sites/1055/2020/09/IMG_0059.cleaned.jpg)