A long-term historical perspective on a city’s infrastructures can reveal radically diverse agendas behind the call for municipalisation.

Municipalisation. A word that is difficult to say, but easy to comprehend. Or at least, we like to think its meaning is obvious. It’s about transferring ownership of an enterprise – such as a utility – to a local authority, right? While this is indisputably true, there is more to municipal acquisition than meets the eye.

In my recent book, “Remaking Berlin. A History of the City through Infrastructure, 1920-2020”, I explore Berlin’s energy and water infrastructures across a century that witnessed National Socialism, state socialism and various enactments of capitalist democracy. Electricity, gas and water services have been provided for much of this time by locally-based, but not always municipally-owned, utilities. At four points in time concerted efforts have been made to assert municipal influence over Berlin’s utilities, for very different reasons and in diverse ways.

Exactly 100 years ago, in October 1920, the Berlin of today’s borders was created. In a momentous act of territorial enlargement, the jurisdiction of Berlin grew over 12-fold in size and its population doubled, turning the city overnight into one of the largest in the world. Underpinning this administrative reform was a political agenda to render the whole metropolitan area more equitable and efficient.

Electricity, gas and water utilities serving the city were entrusted with overcoming the deep disparities in living conditions across the city. The new socialist/liberal city government saw them as vanguards of urban unification and modernisation. Basic services and tariffs were to be standardised across the city, the technical networks interconnected and extended into suburban settlements and the city’s own utilities run as model employers.

To achieve this, the city government needed control over these utilities. Typical of Germany at the time, many of the utilities serving the urban area prior to 1920 had been in municipal ownership. These entities were amalgamated into their Berlin counterparts in 1920. This proved easier on paper than in practice, as many of the former cities incorporated into Greater Berlin resented giving up control over these symbols of municipal self-government. By the mid-1920s, however, the unification of municipal electricity, gas and water utilities was complete.

These three urban utilities – Bewag, Gasag and Wassag – still only covered between 75% and 80% of the Berlin territory (see Figure 1). The rest was served by utilities owned by private investors or regional authorities. Without the resources to buy out these utilities, Berlin pursued during the 1920s a strategy of municipalisation by stealth. There were three components to this strategy. The first was exchange of service territories, whereby areas served by Bewag or Gasag outside the city were swapped for areas served by private utilities within the new city limits. The second was step-by-step acquisition of shares in these private utilities, gradually shifting ownership of both electricity and gas utilities towards the city (see Figure 2). The third was harmonising tariff systems and charges, bringing private providers into line with the municipal one, as successfully negotiated for electricity provision by 1928 and for water supply by 1935. 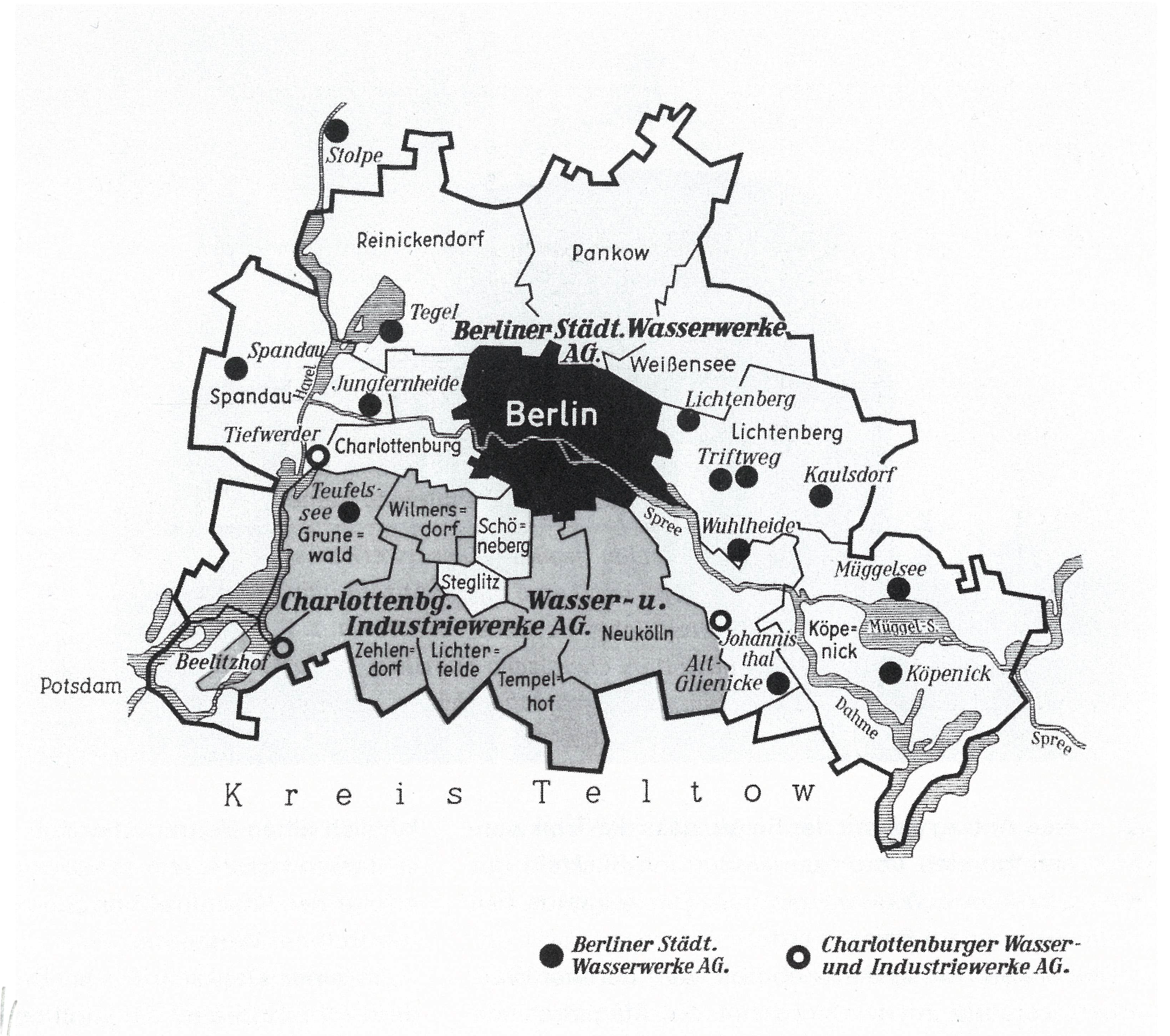 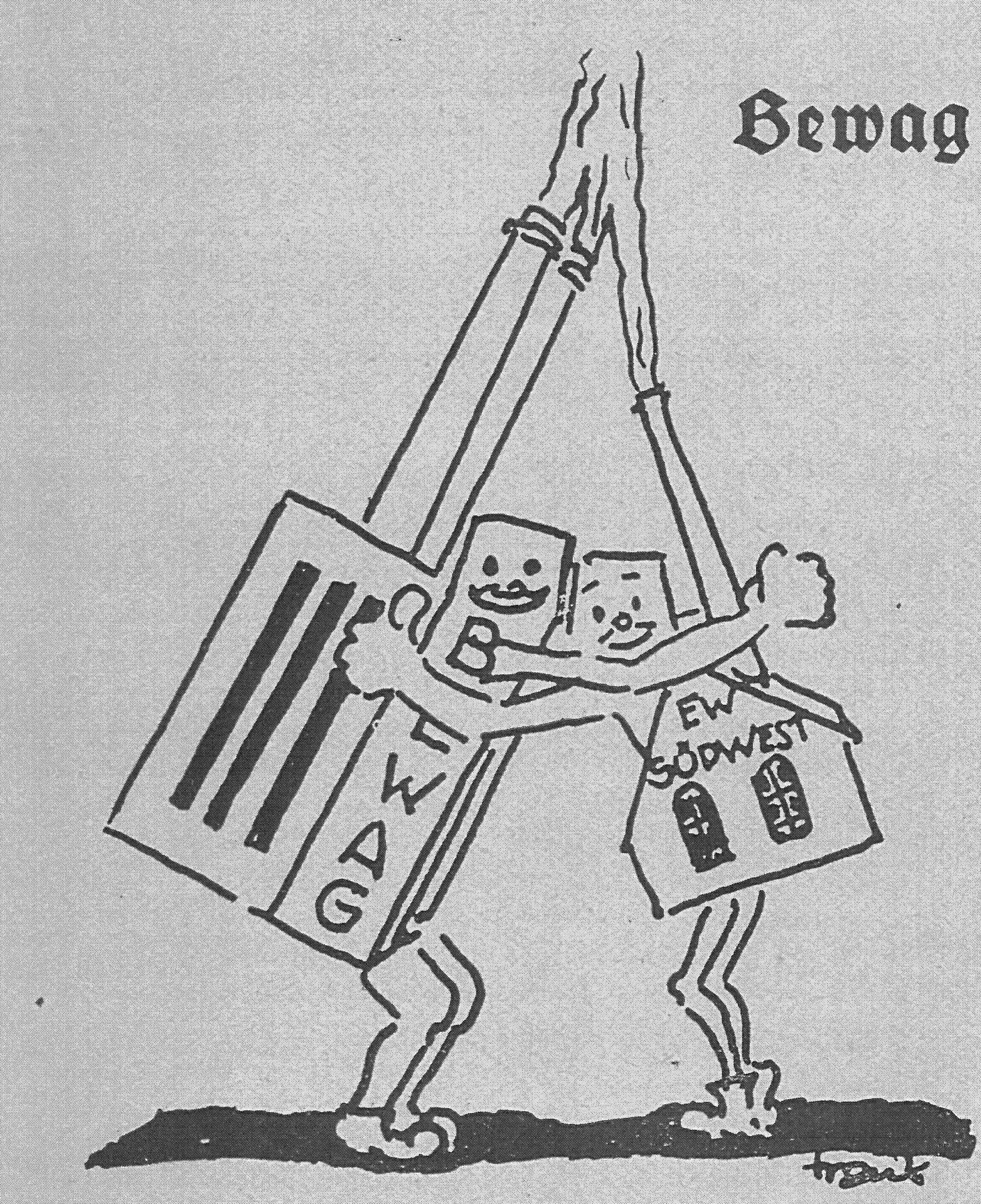 The Nazi era did not herald the end of municipalisation, but the advent of Rekommunalisierung in a perverted form. A policy originally designed to serve Berliners was, after 1933, twisted to serve the German Volk. The object of municipalisation was now those utilities that were owned in part by Jews or foreigners.

The private water utility serving the south-west of the city, Charlottenburger Wasser- und Industriewerke (CWI), had long been a thorn in the side of Greater Berlin’s municipal ambitions and a bitter rival of the city’s water utility Wassag. With many of its shares owned by Jews, CWI became a target of Nazi pressure in the name of remunicipalisation. By the late 1930s, as anti-Semitism became rampant, Jewish investors were being forced to sell their shares in CWI for prices far below their market value. After the war the city authorities claimed that the municipalisation of CWI in August 1945 had been on the order of the occupying Allied Military Command. The true nature of their ill-gotten gains was only revealed by the legal challenges launched in the 1950s by those unjustly dispossessed.

The electricity utility Bewag represents a second example of municipalisation, Nazi-style. This flagship of municipal modernism had been privatised in 1931, when the city felt obliged to sell almost all its shares to cover massive debts accumulating in the wake of the Depression. Many of the new investors were from abroad and some of these – as was meticulously noted after 1933 – were Jews. Bringing Bewag back into national ownership became an obsession of the Nazis once in power. Here too, the campaign was touted explicitly as a form of remunicipalisation that would rid an urban utility of ‘degenerate’ ownership. The start of hostilities in 1940 provided the opportunity for Berlin to acquire the many shares owned by a Belgian firm, Sofina. From the very day the Wehrmacht began its invasion of Holland and Belgium, the city sought ways of confiscating these shares as war booty – albeit without success. Municipalisation by deceit, rather than stealth, was the hallmark of the Nazi era.

Municipalisation re-emerged on the political agenda of Berlin in the 1990s, following the reunification of Germany and the city. This time, it was about dismantling state-socialist enterprises and returning utilities to municipal ownership. Municipal self-government had long been lauded as a pillar of West German democracy. Restoring municipal control of local utilities was, from this perspective, an important step towards democratising East Germany.

East Berlin’s electricity, gas and water utilities had all been subsumed under regional or national entities operating within the state-socialist planning system between the 1950s and 1970s. This ‘aberration’ from the norm was to be rectified by returning them to municipal ownership and then merging them with their West Berlin counterparts (see Figure 3). These municipal marriages between East and West were, perhaps inevitably, on unequal terms. Although celebrated as manifestations of urban unity, the acts of reunion could not mask the dominance of the West Berlin partner in each case. The appointments of senior management, the organisational structures and the strategic orientation all told the same story: the incorporation of the East Berlin variant into the West Berlin model of the municipal utility. 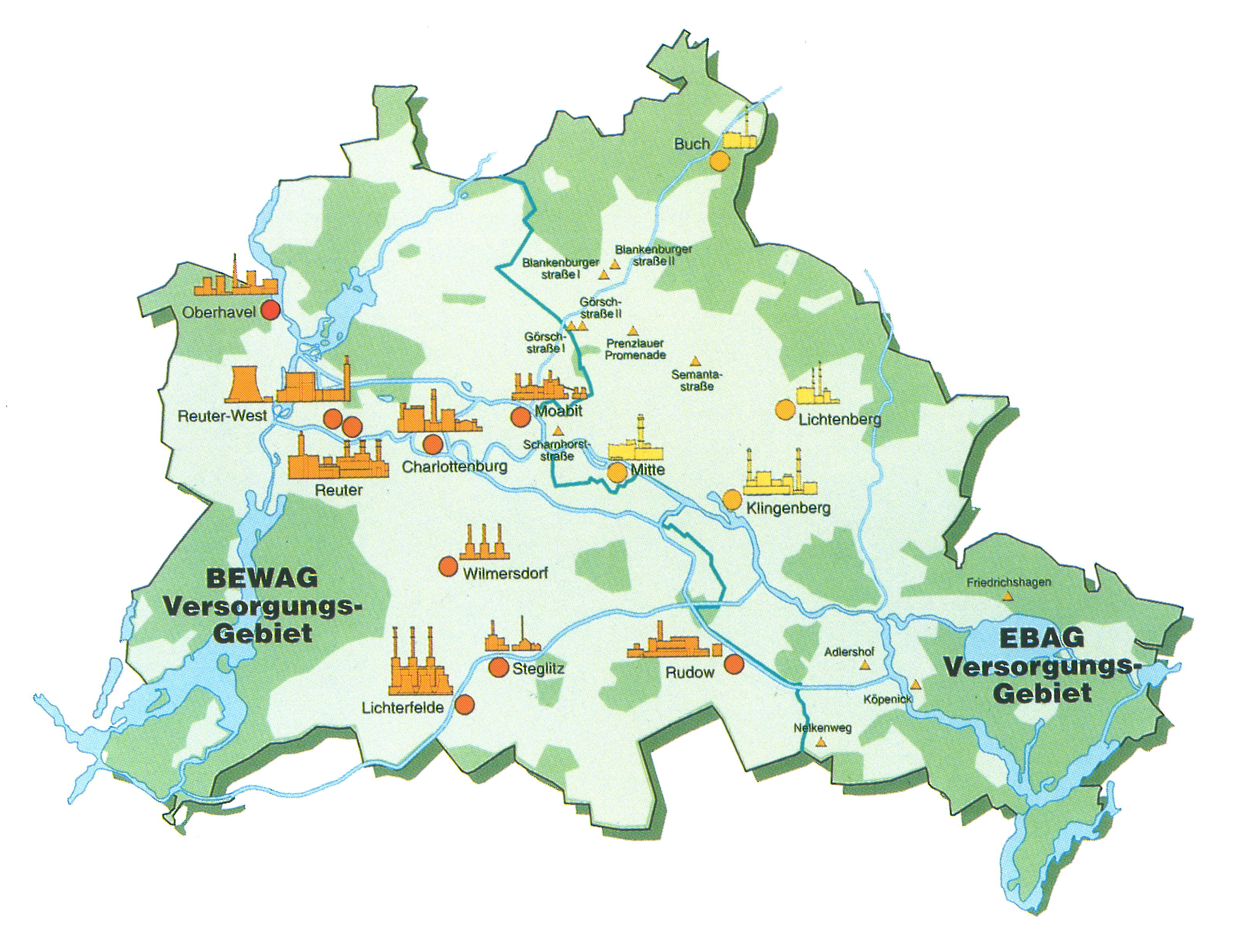 Today, we are witnessing yet another reincarnation of municipalisation in Berlin. At first sight, recent efforts to municipalise the city’s water/sanitation utility, electricity grid and gas network appear just another story about reversing previous experiments in privatisation. For, during the late 1990s, when Berlin – once again – ran up massive debts, the city sold off Bewag, Gasag and half its shareholding in the water utility BWB in return for short-term windfalls to relieve its budget. Since 2000, popular protests against the consequences of private ownership have developed into effective campaigns for remunicipalisation (see Figure 4).

Figure 4. Poster for the referendum on Berlin’s electricity grid, 2013, reading “Our Stadtwerk. Our power grid. Our Berlin”. Source: http://www.berliner-energietisch.net/materialien.

A closer look reveals, however, a very different imaginary of the municipal utility being articulated by these social movements. What groups such as the Berlin Energy Roundtable or the Berlin Water Roundtable are calling for is not a return to the status quo ante. Their vision is not limited to the transfer of share ownership from private to city-state hands. They are just as interested in how utilities are run and to what purpose. The municipal utility that they are advocating is environmentally sustainable, politically accountable and socially equitable.

Thanks to their campaigning, BWB has already returned to full city ownership, a Stadtwerk has been founded to promote de-carbonisation in Berlin and Vattenfall Europe has signalled its interest in selling the local electricity grid back to the city. How far Berlin’s utilities will democratise their management and prioritise sustainability remains to be seen. What the social movements are telling them – and what history can tell us all – is that there is much more to municipalisation than formal ownership of an enterprise.

Timothy Moss is Senior Researcher at the Integrative Research Institute on Transformations of Human-Environment Systems (IRI THESys), Humboldt University of Berlin and Honorary Professor at the Leibniz University Hannover.  Tim’s new book, Remaking Berlin. A History of the City through Infrastructure, 1920-2020, takes a novel perspective on Berlin’s turbulent twentieth-century history, examining it through the lens of its water and energy infrastructures.

Ingredients for the Pluriverse. Collective collage.