Despite its serious flaws, Jeff Gibbs’s documentary Planet of the Humans powerfully exposes how optimism for “renewable energy” transitions is misplaced, and how mainstream environmentalism is becoming a force for green capitalism.

People are outraged! Jeffery Gibbs’s new documentary, Planet of the Humans – co-produced by Michael Moore and Ozzie Zehner – has shocked and awed “progressive” critics, fuelling a steady stream of outcry. “It is truly demoralizing how much damage this film has done at a moment when many are ready for deep change,” exclaims Naomi Klein on Twitter.

Much of the concern voiced is correct, yet it detracts away from two fundamental messages: “renewable energy” is dependent on extreme mineral and hydrocarbon extraction, and mainstream environmentalism has “sold out.” This, in many ways, is old news for political ecologists, especially those involved in environmental conflicts concerning wind power, hydroelectric dams and mineral extraction development, yet the pandemonium generated by this film deserves some clarification.

The documentary has some foundational flaws. It underestimates the efficiency and capacity of wind and solar technologies. The data is old and the range of people interviewed limited. More damaging, however, is their discussion of population. Yes, population is an issue, and voluntary initiatives to control it are adopted by some environmentalists (for instance, degrowth advocates). Yet, modes of consumption and production will always be the determining factors for how populations will articulate catastrophic ecological and climatic impacts.

The problem with the “overpopulation” narrative is that it condemns all of humanity for the present socio-ecological situation. Even if, later in the documentary, corporations, financial consultants and their “environmental movement” collaborators become the main focus of critique, the directors largely neglect class, race, and gender as issues related to environmental degradation.

At the same time, the film forgets the socio-ecological values of different groups. It overwrites the variegated agency of (a “pluriverse” of) people, positioning Indigenous land defenders at war with extraction in the background, and not acknowledging in any way their different socio-ecological practices and relationships. The lack of clarity surrounding these issues, or the missing explicit support for environmental struggles against green capitalism and extraction is damaging, ultimately taking away from issues that deserve popular acknowledgment in the film.

This also includes increases in other minerals essential to solar, wind and battery technologies over the same period:  35-70% neodymium, 38-105% in silver, 920% in indium, 2,700% increases in lithium and is compounded with further increases (70%) with the promotion of electric vehicles.

Moreover, Benjamin Sovacool and colleagues calculate a single 3.1 MW wind turbine creates “772 to 1807 tons of landfill waste, 40 to 85 tons of waste sent for incineration and about 7.3 tons of e-waste per unit.” This does not even account for mineral processing, component manufacturing, transportation or provisions for security personnel to facilitate security operations of “renewable energy” extraction sites or development sites. Remember: “It takes 500,000 gallons of water to produce a single ton of lithium.”

Critics of the film declare to speak in the name of science. Yet this is a question of research design and methodology. Fossil fuel+ projects are frequently justified by carbon accounting and modelling practices imbued with capitalist ideologies and technological utopianism, which – more to the point – are separated from the political contexts, neglect various forms of pollution (e.g., industrial wastes), local struggles and violence emanating from “green” and corresponding mining projects that animate fossil fuel+ development.

Land defenders are well aware of corporate co-optation of environmental struggles. Jeff Gibbs and colleagues are correct to highlight these connections as this problem has only intensified. Submedia.tv released a documentary nearly 10 years ago demonstrating at length the problem of environmental NGOs co-opting struggles and marginalizing land defenders. This segment, moreover, documented the connection between large environmental NGOs, such as Greenpeace and Sierra Club, and their staff going to work in mineral extraction and timber industries. Does anyone remember how, in 2014, Greenpeace lost £3 million in currency speculation? The proclaimed mission and actions of environmental NGOs frequently do not add up.

The “NGOization” of struggle has emerged as a body of literature. Meanwhile, Cory Morningstar’s updated the connection of green capitalists, “climate youth leaders” and the new (corporate) environmental movement, charting trends and issues many ignore or fail to understand. Planet of the Humans documents a small piece of this compared to Morningstar’s work, focusing primarily on Al Gore, Bill Mckibben and their financial managers and partners.

While Al Gore is no surprise, some film reviewers suggest Bill McKibben’s exposé was startling, if not personally offensive. “I have never taken a penny from green energy companies or mutual funds or anyone else with a role in these fights, ” explains Mckibben in a Rolling Stone interview, “I’ve never been paid by environmental groups either, not even 350.org, which I founded and which I’ve given all I have to give.”

The film presents some damaging evidence. For instance, it shows McKibben sitting on a panel at the “Investors and Environmentalists Sustainable Proposal,” discussing a “40-50 trillion ‘green energy fund'” with The World Resource Institutes’ David Blood, who “spent 18 years at Goldman Sachs including serving as CEO of Goldman Sachs Asset Management.” Moreover, 350.org’s collaboration with the “Green Century Funds” makes a clear connection to how manufactured or self-styled “environmental leaders” (see 1:15:14) are clearly in bed with green capitalism and efforts to financialize nature.

The No Deal for Nature Campaign is particularly relevant in this regard. The exposé of corporate environmentalism and collaborative efforts to financialize nature holds. The film highlights the timeless issues of “leaders,” but also how single-issue campaigning – built on carbon accounting and narrowing its focus to “fossil fuels” – disables itself from holistic assessments and offers itself to the construction of a “green” or “climate” economy their movement leaders are invested in promoting. 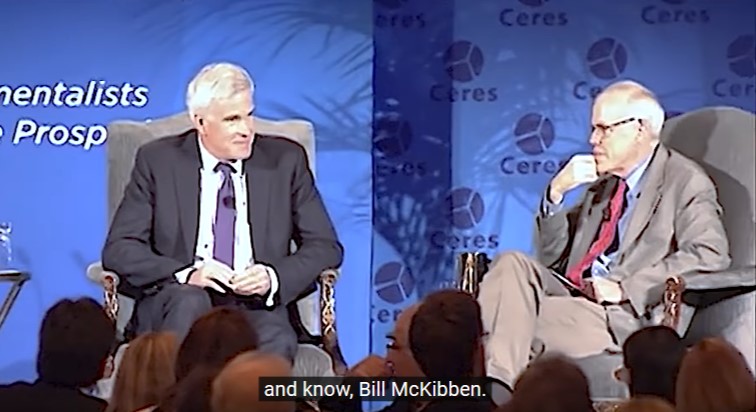 The film deserves both hostility and love. Hostility for carelessly discussing population issues, homogenizing different people – a socio-ecological-cultural flattening – and lacking, even in passing, respect for those fighting the mines, energy factories and politicians small and large, formal and informal. The film would have benefited from a more refined scope and tighter narrative, with a greater diversity of participants, from Indigenous groups struggling against fossil fuel+ projects, to political ecologists and environmental anthropologists.

Yet the film also deserves love, as it highlights a neglected and sensitive issue for many: how the (mainstream) “environmental movement” has been corporatized, how its actions are not working, and how “renewable energy”/fossil fuel+ systems are not ecologically sustainable. The film is correct to publicize these issues, even if most popular media outlets are having a less than intelligent conversation about the contested issues within the film. Instead of writing the film off as “demoralizing“, it should resituate one’s hopes and realities concerning environmental struggle.

Concern has also been voiced about the film “dividing” the environmental movement. But the movement is already divided, to the extent that environmental “leaders” are divided from their “flock”, and “light” green (capitalist) movements try to extinguish or recuperate “dark” green radical critique and action. Autonomous, horizontal and leaderless resistance akin to the multiplicity of land struggles taking place across the world, should be what climate activists gain inspiration from – not McKibben or Gore. Earth First!, for instance, – not without its critiques – represents an alternative mass-organizational model, discarding leaders and dedicated to organizing discussion space and direct action.

Those shocked by Planet of the Humans’ revelations concerning “renewable energy” and environmental movement “leaders” are either unfamiliar with the boundless treachery of capitalist society or have yet to commit themselves to fighting the capture, domestication and exploitation of human and nonhuman resources near and far.