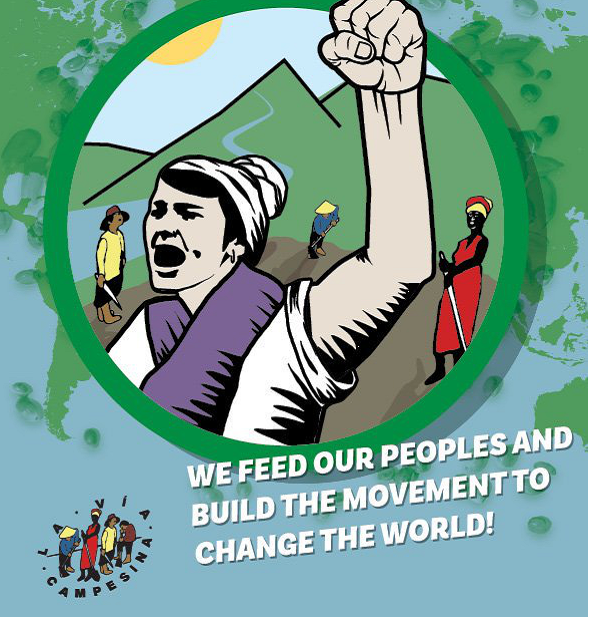 Image of the VIIth International Conference of Vía Campesina held in the Basque Country in 2017. Source: http://www.eh-derio-lvc-2017.ehnebizkaia.eus/

In Spain, the specter of right-wing populism is also haunting rural areas. In the Basque Country, a politics of food sovereignty based on “solidarity from below” is helping to cultivate a wide-spread, rural and urban left-wing politics that thwarts the growth of exclusionary spaces of politics and forms of identities so central to right-wing populism.

In many countries, right-wing populism is developing strongholds in rural areas. This has been attributed to increased rural inequality, economic exclusion and dispossession due to resource grabs, among others, accompanied by a sense of loss in social identity, cultural belonging and political recognition and corresponding grievances of those living in rural areas.  These are symptoms of an entrenched crisis of neoliberal capitalism. Many who are concerned about social and environmental justice are asking what can be done? What strategies and actions will get us out of this situation?

One response includes Filipino political activist and academic Jun Borras’s call for a global, class-conscious, socialist-oriented movement grounded in class-based alliances, cross-cutting messy social identities and divides of generation, gender, race and nationalism, and internationalism. He argues that agrarian social movements advocating food sovereignty – i.e. the democratization of the agro-food systems – are most effective when they forge alliances with marginalized urban groups, such as workers, migrants, racialized communities, and low-income people

We agree and would add that constructing “solidarity from below” is needed if we want to create strong, local and global movements to confront the regressive and exclusionary nationalist/gender/race politics of right-wing populist forces. In this blog post (and our recently published paper), we illustrate this argument by examining the food sovereignty politics of EHNE-Bizkaia, a small farmers’ union, member of La Vía Campesina and leading figure in the Basque food sovereignty movement.

Solidarity from below, as conceptualized by David Featherstone, is the creation of political bonds among exploited, marginalized and oppressed social groups in ways that transform and shape identities towards radical and emancipatory left-wing politics. It is the enactment of forms of political agency aimed at confronting, challenging and superseding uneven power relations and geographies.

Solidarity is not a given but must be actively built. The making of solidarities also involves negotiating social differences. This can be made in ways that entrench, or cross-cut, confront and challenge social prejudices that emerge from powerful divides of class, gender, ethnicity/race, age, etc. To overcome fragmentation among the subaltern, it is necessary to combine, and enmesh a class politics with feminist, anti-racist, and other struggles against social inequities. Solidarity thus involves a generative process of reshaping and transforming values, identities, relationships, ideas and knowledges, through which to reinvent forms of political activism and collective struggle.

The building of solidarities has also a spatial dimension. Inspired by Doreen Massey’s relational approach to understanding space and place, Featherstone calls for viewing local struggles (and identities) as being shaped, and actively transformed by connections with other social actors, places and struggles elsewhere—what he labels “subaltern geographies of connection”.

In Spain, the specter of right-wing populism is also haunting rural areas. In the Basque Country, a politics of food sovereignty based on “solidarity from below” is helping to cultivate a wide-spread, rural and urban left-wing politics that thwarts the growth of exclusionary spaces of politics and forms of identities so central to right-wing populism.

Since its inception in 1976, EHNE-Bizkaia has adopted an “outward-lookingness,” to adopt a phrase by Massey. It has engaged in movement-building by bringing together (in platforms, organizations, confederations, etc.) disparate place-based struggles of peasants and small-scale, family farmers throughout the Basque Country (French and Spanish), Spain, Europe and internationally. In this way, it has contributed to move beyond localized, dispersed struggles, increasing their reach and power to affect social change. For instance, EHNE-Bizkaia played a key leadership role in consolidating the Vía Campesina and the political project of food sovereignty. Through this work, an important cross-fertilization between different social realities, perceptions and perspectives has occurred.

These efforts also helped change EHNE-Bizkaia politics at home. In a context of declining demographics, aging family farmers and a general disinterest of society/urban actors to the sector’s problems, EHNE-Bizkaia prioritized attracting new and young peasants. It also proactively focused on agroecology as an alternative to industrial food and farming systems, and developed a network of community supported agriculture (Nekasarea) to link with urban consumers (at affordable prices) and built alternatives for commercialization. 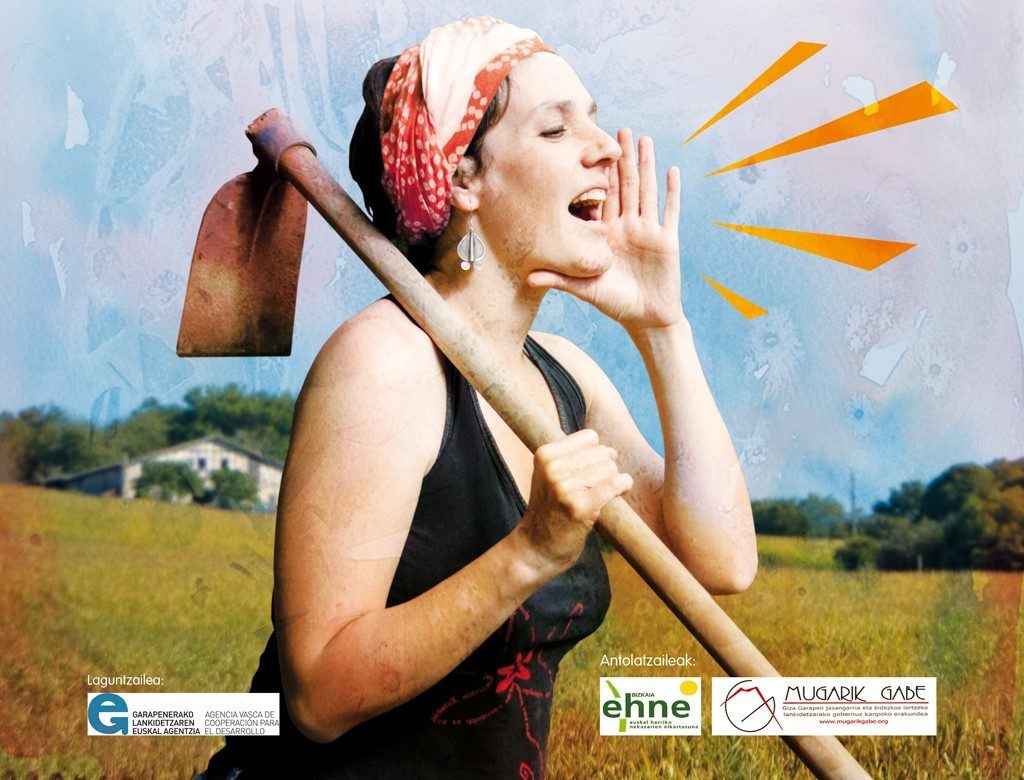 Poster announcing the II Encounter of Young Peasants and Agroecology in the Basque Country, promoted by EHNE-Bizkaia in 2012. Source: https://zuribeltz.wordpress.com

These practical, place-based alternatives helped rejuvenate agriculture and brought renewed energies to the sector and, potentially, to activism. They also helped cultivate cross-sectoral solidarities across the rural-urban divide, reconstructing common interest between food providers and food consumers. Etxalde, a new social movement for food sovereignty has emerged from these efforts, connecting different local experiences and social actors and groups.

For EHNE-Bizkaia, food sovereignty also involved establishing solidarity relations with other organizations such as NGOs, trade unions, and social movements. Trade unions are considered key allies, as both workers and family, small-scale farmers share a common struggle against neoliberalism (and capitalism more generally) and are leading social change actors. EHNE-Bizkaia also reaches out to the general public through training and by disseminating information related to food and agriculture, thus cultivating solidarities with the agrarian, and rural world beyond its direct social base.

This advancing of food sovereignty through “subaltern geographies of connection” is enmeshed in efforts to rework political identities towards social justice and left-wing, progressive and radical ideals of social change. EHNE-Bizkaia devotes attention to politicizing both producers, consumers and others who approach the union. This is done, for instance, explicitly through including an ideological dimension in agroecological training to new farmers, and implicitly in the way alternatives such as Nekasarea work. Here, stimulating critical thinking and debate is crucial.

Finally, for EHNE-Bizkaia, food sovereignty meant tackling gender oppression, racism and xenophobia and attempts to construct non-exclusionary notions of sovereignty. In its efforts to eradicate gender inequities and inequalities in agriculture, the union works with feminist movements and organizations locally and internationally.

EHNE-Bizkaia also supports a politics of welcoming immigrants and refugees, while stressing that migratory movements consist (also) of peasants who have been dispossessed by the global dynamics of agrarian capitalism. Since this is a situation, which local farmers also face, this approach thus cultivates possibilities for engagement in a politics of solidarity between locals and migrants.

Although the case of the Basque Country is context-specific, it can inspire and offer suggestions to other agrarian movements elsewhere. EHNE-Bizkaia’s experience indicates that intersecting peasant identities and movements with the working-class, workers’ movements, feminism and anti-racism helps cultivate a leftist politics of solidarity between the subaltern, which builds on non-exclusionary notions of sovereignty, thus limiting spaces for the growth of regressive politics. In other words, engaging in a politics of solidarity from below as a way of transforming identities and relations is key in blocking the emergence and spread of right-wing populism.

Nonetheless, EHNE-Bizkaia’s continued work at building solidarity from below is not a given; it depends much on its ability to effectively address important and ongoing difficulties, contradictions, and challenges which arise from structural dynamics, moving social identities, and interpersonal relationships.

*This blog post results from our latest article “Solidarities from Below in the Making of Emancipatory Rural Politics: Insights from Food Sovereignty Struggles in the Basque Country”, free access at https://onlinelibrary.wiley.com/doi/full/10.1111/soru.12264

Rita Calvário is a postdoctoral researcher in the project JUSTFOOD at the Center of Social Studies, University of Coimbra. She is also an editor of the Undisciplined Environments platform.

Annette Aurélie Desmarais is Canada Research Chair in Human Rights, Social Justice and Food Sovereignty at the University of Manitoba in Canada. She is the author of La Vía Campesina: Globalization and the Power of Peasants (2007), and co-editor of Food Sovereignty: Reconnecting Food, Nature and Community (2010), Food Sovereignty in Canada: Creating Just and Sustainable Food Systems (2011), and Public Policies for Food Sovereignty: Social Movements and the State (2017)

Joseba Azkarraga Etxagibel is PhD in Sociology. He lives in the Basque Country and teaches in the Department of Sociology at the University of the Basque Country (UPV/EHU). His main research interests has focused on analyzing the social-solidarity economy, and associated socioecological issues. He received the Basque Social Reality Research Award from the Basque Government for his research on the Mondragon cooperatives.