Solid waste is often seen as an environmental problem to be solved through change of behaviour and recycling. Political ecology can sharpen our analysis of the politics involved in the way materials move through the economy. Prospects for reducing the amount of solid waste generated and ambitions for a “circular economy” will entail qualitative transformations in patterns of material flows and organisation of labour. Deciphering the shape of these changes necessarily begins in the present conditions and struggles of waste workers.

The photographs accompanying this article are from ‘Wasteland’ by Kadir van Lohuizen, a winning series in the 2018 World Press Photo Awards. The photographs were published along with videos and a written story in the Washington Post with the title ‘Drowning in Garbage’ on 21st November 2017.

Kadir van Lohuizen’s Wasteland photos draw attention to the growing volume of solid waste and, through visits to six cities across the world, explore “how different societies manage—or mismanage—their waste”. The photos provide a vantage point from which to glimpse the world metabolism – the relation of humans to nature through production – the circulations of extraction, use and disposal of materials. These photos can easily conjure catastrophic visions of swelling numbers of people producing growing piles of garbage, despoiling Nature and threatening to inundate us. “I honestly feel if we don’t do anything we are going to drown in our own waste”, says van Lohuizen in the accompanying video for The Washington Post.

Political ecology can substantially sharpen our analysis of the politics of waste, the uneven distribution of benefits and burdens, the already ongoing conflicts over the valorization of waste as a resource, as well as the political effects of waste as a mobile category, which casts people, places and practices as wasteful, feckless, residual. By overcoming being revulsed by our own waste and wishing it would go away, and instead engaging with waste as an important expression of the way production and livelihood is organised, we can better focus on how more just socio-metabolic configurations of humans and matter might be assembled.

4000 people salvage a livelihood from the Olusosun landfill (pictured above and below) in a complex informal economy. Globally an estimated 1% of the world population are informal waste workers. West African scholars trace informal waste work in Nigeria to the structural adjustment programme imposed in 1986, after which rates of poverty and unemployment roughly doubled by the mid 2000’s. Waste work emerges as marginal livelihood strategy for the ‘relative surplus population’ who are excluded from formal wage labour but nevertheless form an important part of the labouring population. Indeed, many studies have drawn attention to the significant contributions of informal waste work to urban sanitation, providing survival and livelihoods, as well as recycling large quantities of revalorised materials back into national and international industries. For example, 95% of materials in the reuse chain in Accra, Ghana, are delivered through the labour of informal waste workers.

The asymmetry between the work performed by informal waste workers and the poor compensation and indifference of public policies towards the welfare of the workers, appears to be maintained in large part through stigmas attached to waste work as ‘lowly’ and ‘degrading’ and where the sector is seen as inefficient and tainted by dysfunctionality and criminality. Nwosu, Nzeadibe, and Mbah, in their study of informal waste management and public policy in West Africa, blame the negative connotations harboured by institutional stakeholders for this neglect in politics and policy. But it is only capitalism that has formally cast waste workers as surplus (and even then it happily receives their products through the backdoor); waste workers themselves, through labouring with materials, see the value they create: “I give new life to things that are unwanted, that people have thrown away”, a Delhi waste worker tells Vinay Gidwani.

In multiple countries, waste workers have formed associations through which to negotiate with state organs governing waste management – securing recognition and formal rights to carry out waste collection – and thereby have built political power. In 2008, 6’000 waste workers organised in the union Kagad Kach Patra Kashtakari Panchayat (KKPKP), made an agreement with the Pune Municipal Corporation to provide door-to-door collection. Waste pickers’ cooperatives have been included in solid waste management strategies and governance in Belo Horizonte, Brazil since 1993, as well as in Colombia. In both countries, movements of informal workers resulted in legal frameworks that recognize waste pickers’ legitimate right to collect waste as common property. .

Studies of informal waste workers from the Global South have moved from a focus on global relations of ecologically unequal exchange via toxic dumping, towards waste workers’ struggles to protect and improve their livelihoods. The salvaged ‘waste commons’ which form the basis of waste-pickers work are vulnerable to enclosure where new technologies, material scarcities or environmental priorities revalorize waste and/or the need to control it more totally.

Federico Demaria & Seth Schindler describe a conflict in Delhi, where the changing composition of waste has increased its value, making it a profitable flow to control. The new (privatized) waste management system threatens to seal off the waste collection system and funnel high-calorie materials to waste-to-energy plants, competing with the city’s 200,000 informal waste workers for recyclables like paper and plastic. These authors argue waste-to-energy solutions, in addition to dispossessing workers of their livelihoods, may embed institutional interests in sustaining a high waste throughput and recommend that the informal sector should be more inclusively incorporated into an efficient, distributed and labour-intensive waste management system – without incineration.

The integration of informal waste workers into waste management systems is thus emerging as a popular policy proposal. Studies from West Africa argue foreign based capital-intensive waste management systems have largely been inappropriate for the local development trajectories of Ghanaian cities, and that recognition and integration of informal solid waste management practices should be pursued. Sonia Maria Dias sketches a tentative model of “inclusive solid waste management” based on rights to ‘waste commons’, engagement with informal waste worker organizations and participatory governance. But the formalizing informal waste work can be difficult. In South Africa, a 90 per cent failure rate for waste cooperative initiatives has been reported. Formalization initiatives also involve complex relationships of power: movements to formalize may come from worker self-organization to improve livelihoods, or encouraged by NGO’s, state and private actors as part of global attempts to control and profit from waste.

Waste commons and salvaged livelihoods then appear as what Vinay Gidwani calls a “permanent border area of primitive accumulation”, subject to inclusion/exclusion from expanded reproduction depending on the prevailing conditions of profitability. Whilst “capitalism must perpetually have something outside of itself” to maintain stability according to David Harvey, this outside simultaneously propagates alternatives where salvaged commons generate common practices and produce new types of worker subjects and political forces. Gidwani emphasises that waste workers’ ‘infra-structural labour’ is simultaneously invisible and essential; in many cities it “repairs and renews the city, continuously re-creating the conditions of possibility for urban life and capitalist enterprise”.

Zero waste strategies, fluctuations in raw materials prices, emerging materials constraints and new recovery technologies have in their crosshairs a ‘waste commodity frontier’ within cities. Instability of materials prices and materials constraints and new recovery technologies mean that cities’ waste-streams are targets for materials sourcing. New research into the politics of waste is exploring the consequences of these developments for contestations over the global metabolism, with particular attention to the way that the materiality of waste and waste infrastructures – or the ‘infra-structural’ nature of waste work – may “enable and constrain waste workers’ ability to garner benefits from waste flows”. Beyond a minor recalibration of costs and benefits, this will necessarily entail qualitative transformations in metabolic flows and organisations of labour.

Political ecology should go beyond identifying environmental inequalities to ask what happens when surplus labour and surplus materials demand to be included, compensated and dealt with. Can capitalism afford to pay its bills? As Marxist environmental historian Jason Moore has emphasised in his agenda-setting Capitalism in the Web of Life, the de-valued work-energy of human and extra-human natures is central to the continued expansion of historical capitalism, but it is now rapidly running out of free lunches. The profligate wastefulness of capitalism comes into view and we should consider what type of socio-metabolic profiles, what types of economies, are both feasible and just when both humans and matter refuse to be disposable. 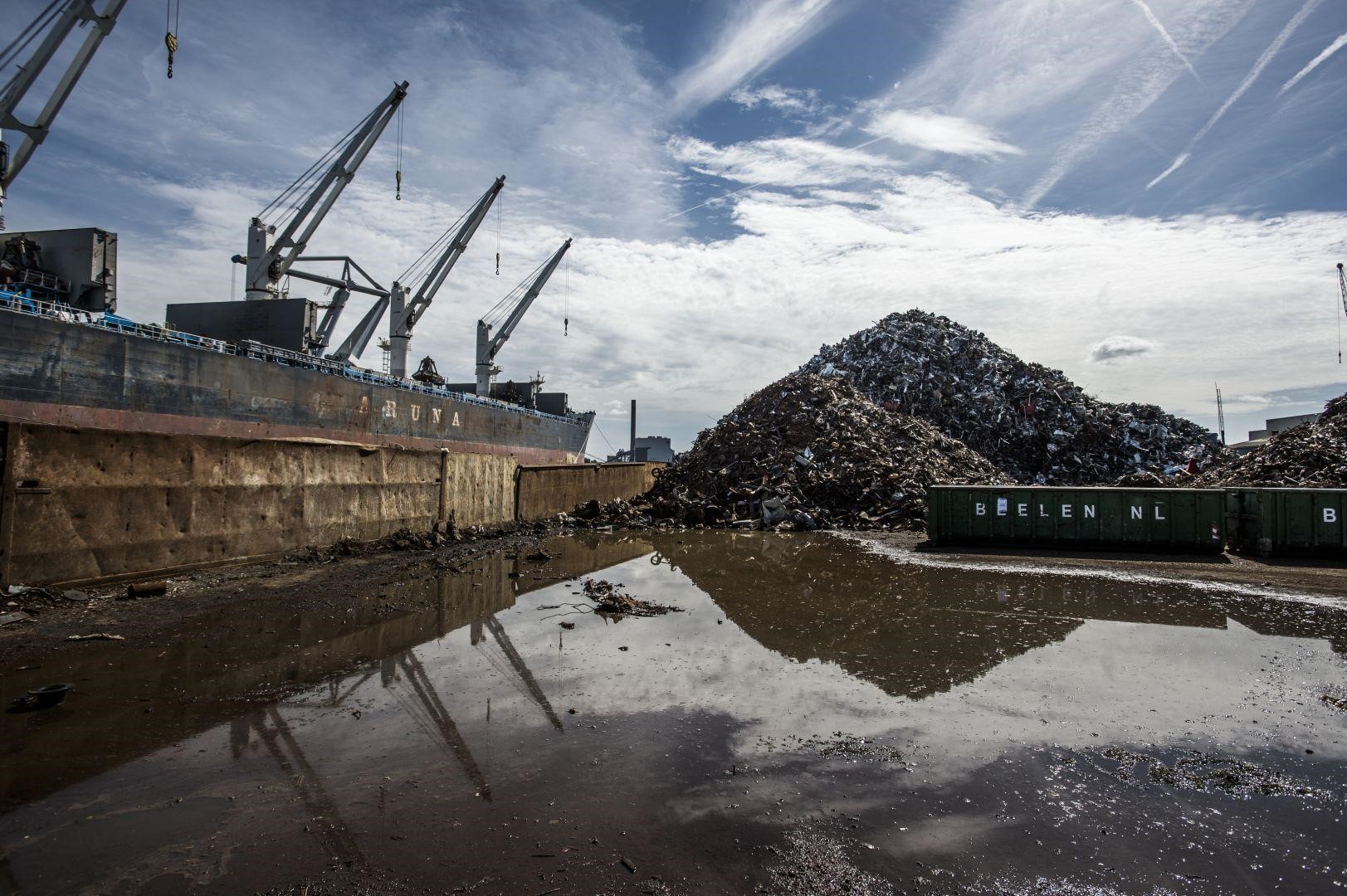 Benjamin Irvine is a Masters student in Ecological Economics at the Institute of Environmental Science and Technology at the Universitat Autònoma de Barcelona. He has a bachelor’s degree (2011) in Politics, Philosophy and Economics from The University of Manchester.